The behavior of swelling soils is mainly governed by its mineralogical composition as well as its environmental factors and stress history. Enugu Shale is one of these shales that assessment of its soil swelling potential cannot only be based on its mineralogical composition alone. The identification of its clay mineral types is basic to understand the roles of other factors of swelling in the soils. The results of particle size distribution indicated that Enugu Shale is dominated by fine-grains with average mean of 69.65, 23.68 sands and 6.67% gravels. While the Atterberg’s limit values are moderate to high, with liquid limit ranging from 22-66%, plastic limit 0-39% and plasticity index 0-39%, abundance of major elemental oxides show that SiO2 (50.4-88.1%), Al2O3 (6.29-28.23%) and Fe2O3 (0.98-12.25%) constitute over 90% of the bulk chemical compositions of the studied area. The studied area is dominated by A-7 soils and low plasticity clay soils according to AASHTO and USCS classification system. The results of free swell ratio range from 1.02-1.45 which indicates that studied area is dominated by mixture of swelling and non-swelling clay minerals. The Van der Merwe’s charts shows low to medium swelling potential. These results show that the study area is dominated by low to medium swelling soils which need to be modified and upgraded before it can be used as subgrade material.

The studies of expansive soils have in recent time attracted a great deal of attention from engineering construction practitioners. For example, Enugu Shale in southern Nigeria is mostly underlain by soft sediments which are prone to expansion in the presence of abundant precipitation in the wet season in addition to clay mineralogy of the soils and other environmental factors prevalent at a time in the history of the soils. The swelling and shrinkage phenomenon associated with the soils  of  this  region  can  be  detrimental  to  engineering projects such as pavement, foundation, slope stability etc. Shale exhibits a wide spectrum of geotechnical characteristics especially as the moisture content increases and has often been a cause for concern on environmental geotechnical issues (Aghamelu et al, 2011). Enugu Shale is one of these shales that significantly show changes in volume on addition of moisture. Severally studies have identified the characteristics of the Shale (Okagbue and Aghamelu, 2010; Ekeocha,  2015;  Oyediran  and  Fadamoro,  2015; Tijani, 2012).

The geology, climatic conditions, environmental factors and drainage conditions provide a natural setting for the occurrence of swelling/shrinkage phenomena. Structural damage caused by swelling phenomena is evident in the soils of Enugu Shale in the Enugu metropolis (Figure 1).

Evaluation of swelling characteristics of the soils using empirical estimation will be of much help to the geotechnical engineers for ease, quick and affordable understanding of the problematic soils of the metropolis. The method adopted in the work of Sridharan and Prakash (2000) was employed to characterize the mineralogy characteristics of the soil using free swelling ratio in comparison with the existing knowledge.

Enugu Shale overlays the Agbani Sandstone/Awgu Shale. It is a lateral equivalent of Nkporo/Owelli formation and one of the oldest deposit of Anambra Basin (Nwajide, 1990). Enugu Shale consists of fissile, grey shale with extra formational clast capped on top by Ironstone with presence of pyrite.

The shale is associated with extensive synsedimetary deformation structures (Nwajide and Reigers, 1999) and lies in the eastern part of Anambra Basin (Figure 2). Enugu Shale is well exposed along Enugu-Onitsha Express Way by New-Market flyover and along Enugu-Port Harcourt Express Way by Ugwuaji flyover. 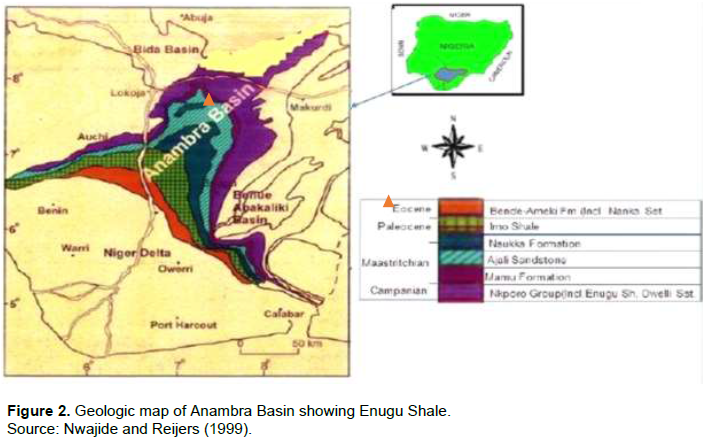 The highly weathered Enugu Shale consists of dirty brown lateritic regolith that is porous and varies significantly up to a maximum depth of 20 m, depending on the topography and drainage conditions (Ekeocha, 2015).

The Enugu metropolis is bounded by latitudes 6°22’ N and 6°30’ N; and longitudes 7°27’ E and 7°47 ’E; and lies within the rainforest belt of Nigeria. The two main seasons that exist in Nigeria are the dry season that runs through the months of October to March, and the rainy season that begins in the late March and ends in October (Nwankwor et al., 1988). The wet period is mostly characterized by moderate temperatures, and high relative humidity, while the dry seasons have high temperatures and lower relative humidity.

The strike of the geomorphic feature in the Enugu metropolis runs through north-south trending escarpment. The scarp slope of the Enugu escarpment rises sharply to the western side, and attains a maximum mean elevation of about 400 m above mean sea level. This elevation is continuous into the Udi Plateau.

A total of thirty samples were collected from different places across Enugu metropolis (Table 1). The samples showed various degree of weathering ranging from slightly weathered to moderately weathered. The samples were collected with the aid of 6 inches hand auger, with sampling depths ranging from 0.5 m to 3.5 m. The sampling strictly followed standard procedure for soil sampling as specified in British Standard Institution (BSI) 1377 (1990). The sampling and laboratory testing were conducted between June and July 2017. The samples were taken to the laboratory for various tests such as Atterberg’s limits (plastic and liquid limit), free swell test and particle size analysis. 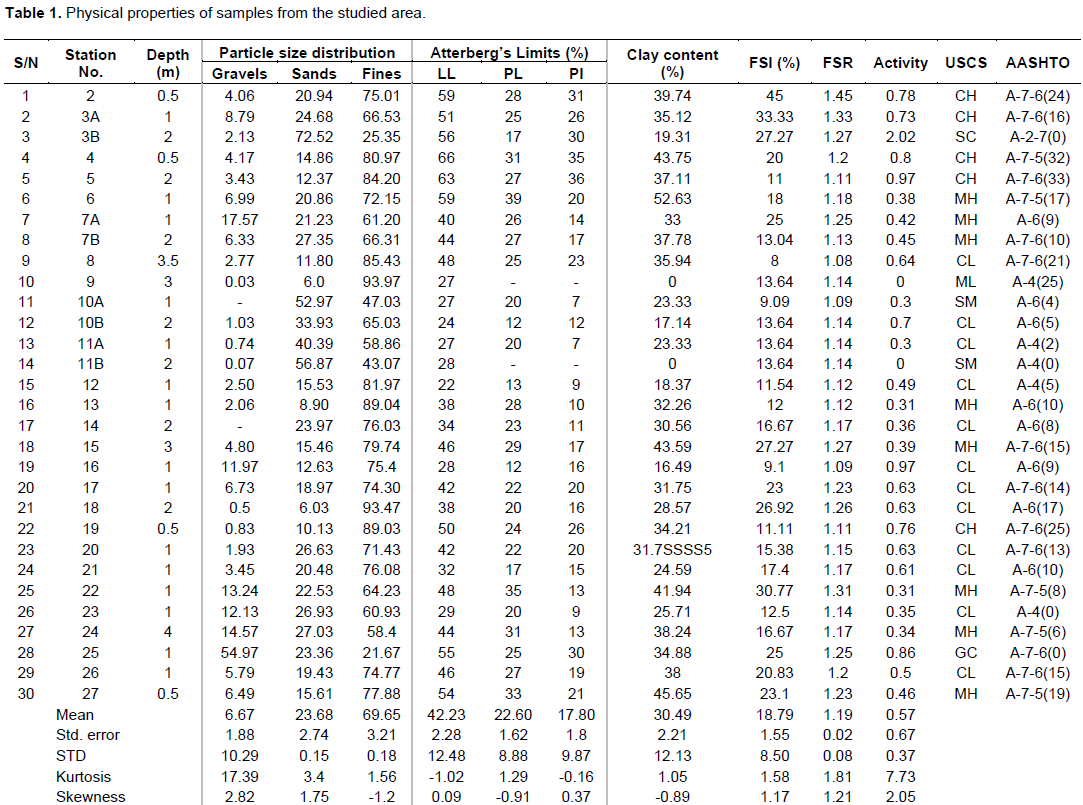 Particle size analysis was conducted on the samples by oven-dried at 105°C of 300 g of samples each. The oven-dried samples were sieved through the various set of BSI sieves, the sample retained on each sieve was weighed and cumulative weight passing through each sieve was calculated as a percentage of the total sample weight. Atterberg’s limits were done adopting the BSI 1377 (1990) test 1A. 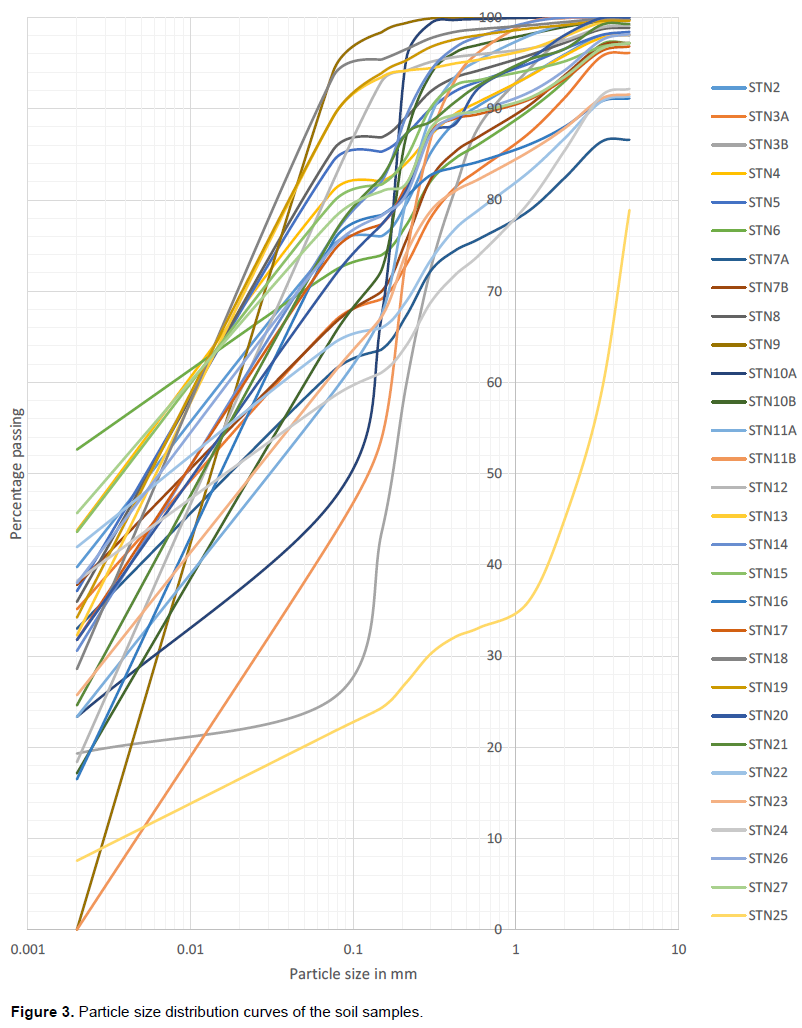 Consistency tests showed liquid limits, plastic limits and plasticity indices range from 22-66, 0-39 and 0-39% respectively. The soils plasticity range from low plasticity to high plasticity according to Bell (2007) with descriptive classification of lean to fat. Plasticity chart (Figure 4) shows the plasticity characteristics of the tested samples in the studied area. 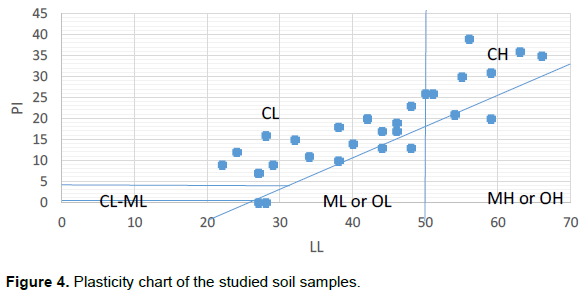 Based on the results of index properties using Skempton (1953) and as modified by Savage (2007), clay content and activity were determined. Activity (A) values range from 0-2.02 and clay content ranges from 0-52.63% were obtained. With average means of 0.46 and 30.49% for activity and clay content respectively. The activity of the soils showed inactive to active with inactive dominating the soils of the studied area (Table 1).

Free Swell Index and Free Swell Ratio values as obtained by laboratory analysis and empirical evaluation showed range of values from 8-45% and 1.08-1.45 for FSI and FSR respectively (Table 1). All the tested samples have FSR above 1.0 (< 1.0 is regarded as nonswelling clay otherwise known as kaolinitic clay) but are within the range of 1.0-1.5 which are regarded as mixture of swelling and nonswelling clay and dominated mostly by kaolinitic and montmorillonitic clay minerals according to Prakash and Sridharan (2000) (Table 2). The results agree with reports of Ekeocha (2015), Oyediran and Fadamoro, (2015) and Tijani (2012) in the studied area.

Lastly, the correlation between percentage fines and other parameters can only be significant for percentage sands. This correlation is negatively very strong at r= -0.892.

Activity, plasticity index, FSI, FSR, plastic limit and clay fraction were correlated with liquid limit at significant level of 0.05 excellently. The correlation coefficients have considerable impact on predicting the swelling characteristics of the soils when related with report of Bell (2007).

The swelling potential is defined by k as follows;

The studied samples were dominated by low to medium swelling soils.

Free swelling test results were used to calculate free swelling ratio. Subsequently, the free swelling ratio (FSR) results were also used to identify the clay minerals present in the study area (Table 1) in comparison to the classification by Sridharan and Prakash (2000) (Table 2). The results of XRD showed that the studied samples consist of kaolinite, Hametite and quartz (Figures 7 and 8). The results obtained agree with work of Oyediran and Fadamoro, (2015) and Ekeocha (2015) on clay mineralogy of the studied area.

The  chemical   characteristics   of  shale  are  mainly  the function of chemistry of the main minerals, cementing materials as well as cation exchange capacity of the clay minerals. Table 4 shows the elemental oxides of the samples in the studied area. Figure 9 shows the relationship between major chemical elements of SiO2, TiO2, Al2O3, Fe2O3, CaO, Na2O, K2O, MgO and MnO on the liquid limit of the soils. The relationship between elemental oxides and liquid limit show that increase in SiO2, TiO2,, Na2O and MnO contents on the studied soil samples caused reduction of liquid limit while Al2O3, Fe2O3, CaO, K2O and MgO increased significantly the liquid limit (Figure 9). This finding agrees with report of Mitchell (1993) which stated that the swelling and other engineering properties of the soils are controlled by the chemical composition of soil materials and water. Dontsova and Norton (1999) reported that high magnesium ions from magnesium oxides and other sources can cause surface sealing of the soil. This occurrence led to water logging of soil and subsequently soil swelling. It was observed that increase in magnesium oxide affects the swelling characteristics of the studied soils. 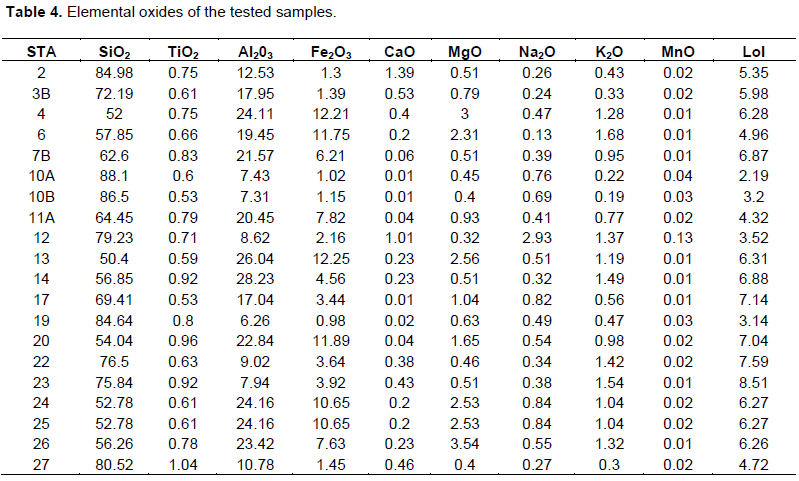 Field observations and experimental analysis identified that changes in geotechnical characteristics are consistent with changes in elevation in the studied area. Severally, other deductions are made from the interpretation   of   laboratory    test    results    and    field observations as follows;

1) The swelling potential of Enugu Shale is essentially medium swelling but abundant precipitation and prevailing climatic conditions kept continuously altering the soils of Enugu  Shale  to  high  swelling   soil   especially   at   low elevation where drainage conditions are quite poor.

3) The dominance   of  A-7-6   soil   based   on   AASTHO classification of the soils of the studied area is an indication that such soil cannot be used as subgrade material.

4) Enugu Shale clay mineralogy is a mixture of kaolinite and montmorillonite. This was obtained using Free Swelling Ratio according to Sridharan and Prakash (2000). Although XRD test did not confirm the presence of montmorillonite, field observation and Van der Merwe’s chart showed the presence of low to medium swelling clay in the studied area.