In this paper, unsteady two-dimensional convective heat and mass transfer flow of a viscous, incompressible, electrically conducting optically thin fluid which is bounded by a vertical infinite plane surface was considered.  A uniform applied homogeneous magnetic field is considered in the transverse direction with first order chemical reaction. An analytical solution for two-dimensional oscillatory flow on unsteady mixed convection of an incompressible viscous fluid, through a porous medium bounded by an infinite vertical plate in the presence of chemical reaction and thermal radiation are presented. The surface absorbs the fluid with a constant suction and the free stream velocity oscillates about a constant mean value. The resulting nonlinear partial differential equations were transformed into a set of ordinary differential equations using two-term series. The closed form solutions for velocity, temperature, concentration, skin friction, Nusselt number, and Sherwood number have been obtained, using the regular perturbation technique. Numerical evaluation of the analytical solutions was performed and the results are presented in tabular and graphical form. This illustrates the influence of the various parameters involved in the problem on the solutions.
Key words: Magnetohydrodynamics (MHD) flow, heat and mass transfer, oscillatory flow, thermal radiation, chemical reaction.

The influence of magnetic field on viscous incompressible flow of electrically conducting fluid has its importance in many applications such as extrusion of plastics in the manufacture of rayon and nylon, purification of crude oil, pulp, paper industry, textile industry and in different geophysical cases, etc. The application of magnetohydrodynamics (MHD) flow is found in metrology, solar physics and in motion of earth's core. Also it has applications in the field of stellar and planetary magnetospheres, aeronautics, chemical engineering, and electronics (Saxena et al., 2014; Rabi et al., 2013). Oscillatory flows has been known to result in higher rates of heat and mass transfer, many studies have been done to understand its characteristics in different systems such as reciprocating engines, pulse combustors, and chemical reactors. The detailed study on fluid mechanics of oscillatory and modulated flows has been made by Cooper et al. (1993). The numerically studied influence of convective heat transfer from periodic open cavities in a channel with oscillatory flow has been studied by Fusegi (1997), Gomaa and Taweel (2005), and Abdelkader and Lounes (2007), respectively. The influence of MHD oscillatory flow on free convection radiation through a porous medium with constant suction velocity and the effect of slip condition on unsteady MHD oscillatory flow of a viscous fluid in a planer channel have been studied by El-Hakiem (2000), Makinde and Mhone (2005) and Mehmood and Ali (2007), respectively.
The MHD oscillatory flow past a vertical porous plate through porous medium in the presence of thermal and mass diffusion with constant heat source has been studied by Gholizadeh (1990). The work of Makinde (1994) is of particular interest since it demonstrated the possibility of achieving significant unsteady incompressible flow in a porous channel. The MHD mixed convection from a vertical plate embedded in porous medium with convective boundary condition has been analyzed by Makinde and Aziz (2010). Rabi et al. (2013) have investigated the influence of chemical reaction effect on MHD oscillatory flow through a porous medium bounded by two vertical porous plates with heat source Soret effect. Chemical reactions are classified as either heterogeneous or homogeneous processes. These processes take place in numerous industrial applications, e.g., polymer production, manufacturing of ceramics and food processing (Cussler, 1998). The diffusion of chemically reactive species in a laminar boundary layer flow is analyzed by Chambre and Young (1958). The exact solution for hydrodynamic boundary layer flow and heat transfer is studied by Vajravelu (1986). Das et al. (1994), Muthucumaraswamy (2001, 2002) and Anjali Devi and Kandasamy (2002) studied the effect of a first-order chemical reaction on the flow in different cases. An analytical solution for heat and mass transfer by laminar flow of a Newtonian, viscous, and electrically conducting fluid is presented by Chamkha (2003). Kandasamy et al. (2005) studied the nonlinear MHD flow, with heat and mass transfer characteristics, of an incompressible, viscous, electrically conducting, Boussinesq fluid with chemical reaction and thermal stratification effects.
The role of thermal radiation is of major importance in engineering areas occurring at high temperatures and knowledge of radiative heat transfer becomes very important in nuclear power plants, gas turbines and the various propulsion devices for aircraft, missiles and space vehicles. Hakeem and Sathiyanathan (2009), Srinivas and Muthuraj (2010), Pal and Talukdar (2010), Chamkha (2003), Bakr (2011) and Prakash et al. (2011) have examined the radiation effect of an oscillatory flow under different conditions. The influence of chemical reaction on unsteady MHD slip flow in a Planer channel with varying concentration has been examined by Sivaraj and Kumar (2011). The main objective of this study is to investigate the effect of periodic heat and mass transfer on unsteady mixed convection MHD flow past an infinite vertical porous flat plate with constant suction in the presence of chemical reaction and thermal radiation when the free stream velocity is oscillating with time. The boundary layer equations governing the problem under consideration are solved by multi-parameter perturbation technique and giving more importance on analytic solution. For this study, air (Pr=0.71) and water (Pr=6.2) are the only fluids under consideration. The closed form solutions for velocity, temperature, skin friction, concentration, Nusselt number, and Sherwood number are presented. The effects of pertinent parameters on fluid flow of heat and mass transfer characteristics are studied in detail. This work is presented as follows. First, the problem is formulated and then the solution of the problem is presented. Following are the results and discussion, and finally, conclusions are summarized.

FORMULATION OF THE PROBLEM 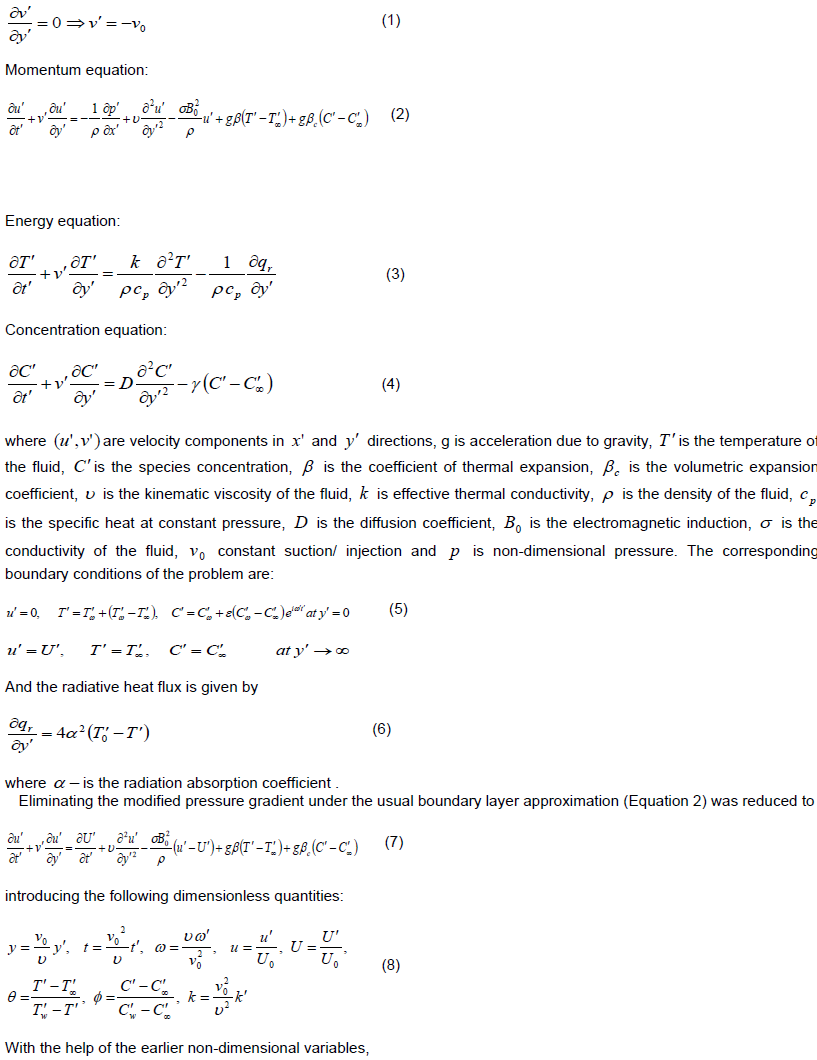 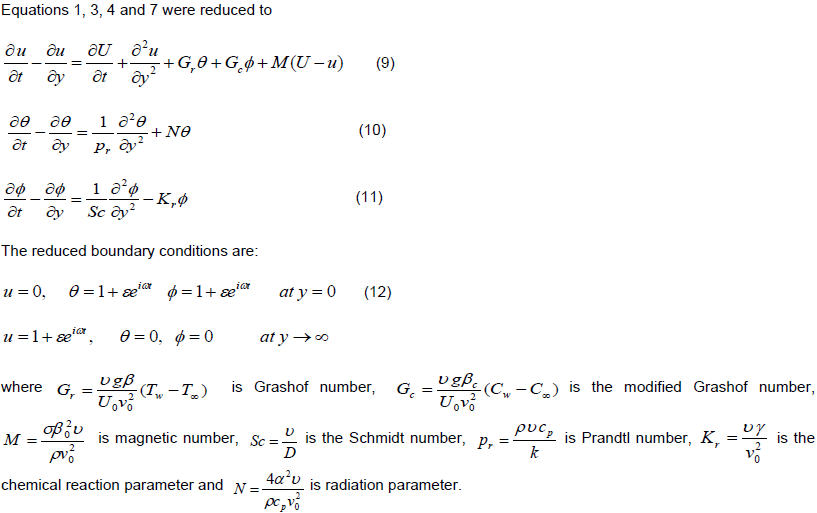 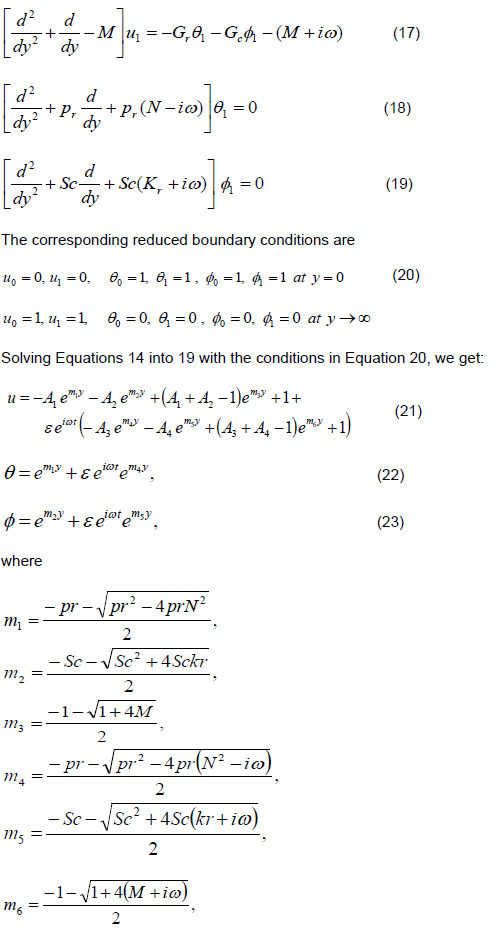 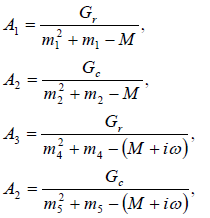 The local skin friction coefficient, local Nusselt number and local Sherwood number are important physical quantities for this type of heat and mass transfer problem. They are defined as the following. The dimensionless shearing stress on the surface of a body is written as: 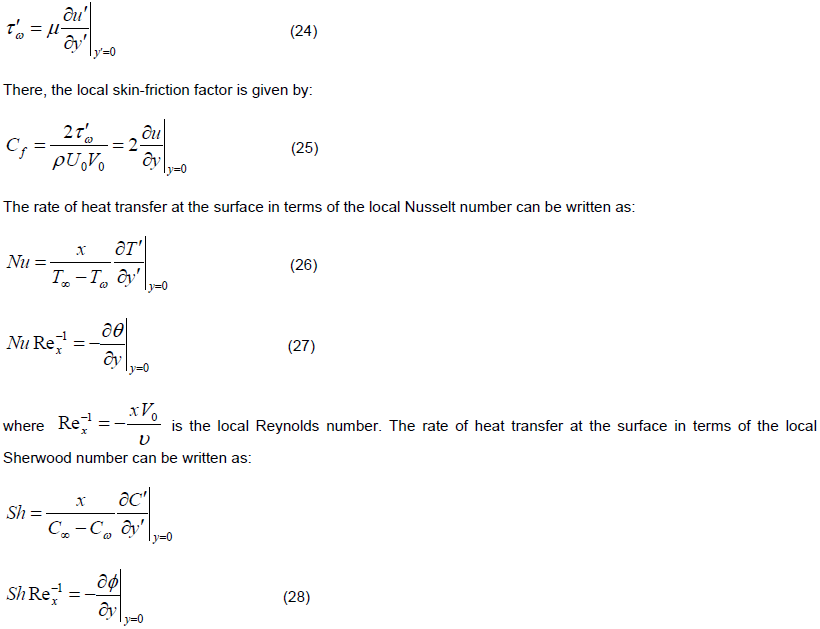 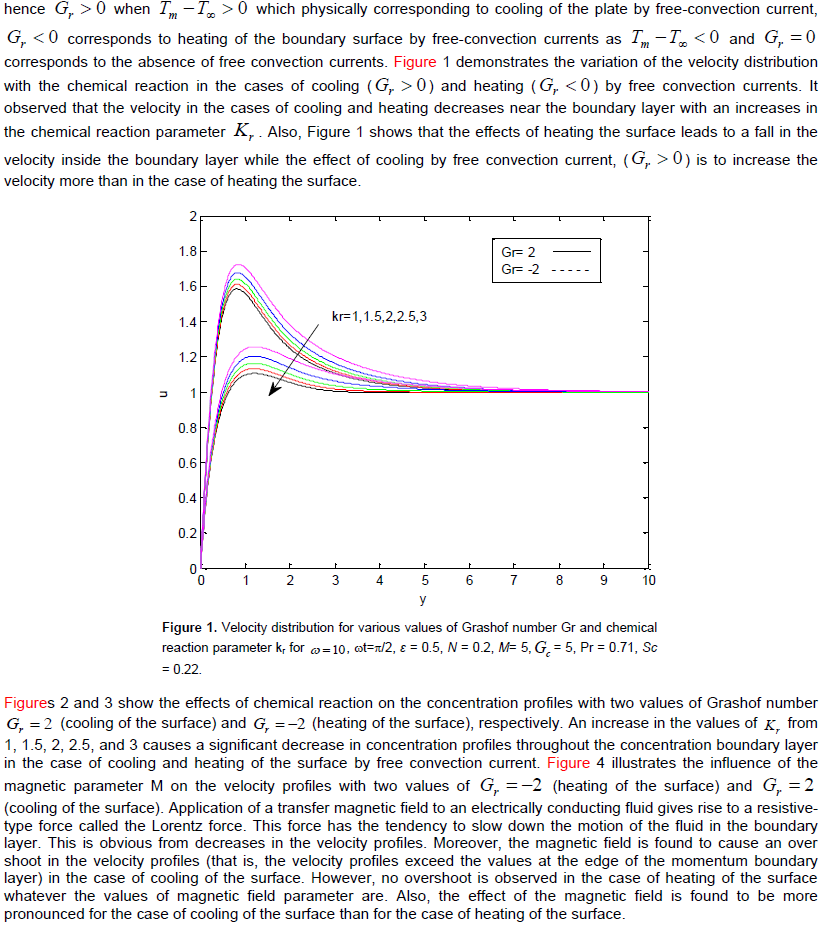 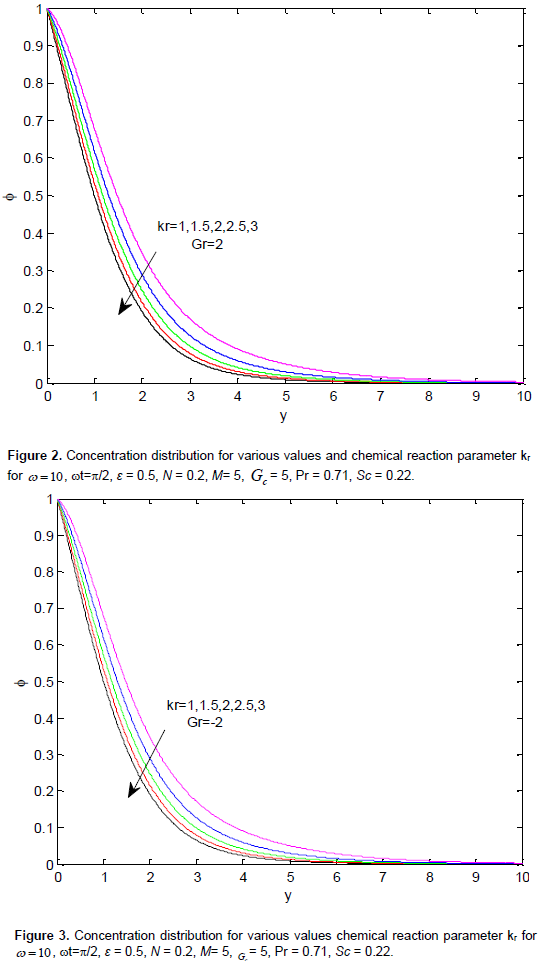 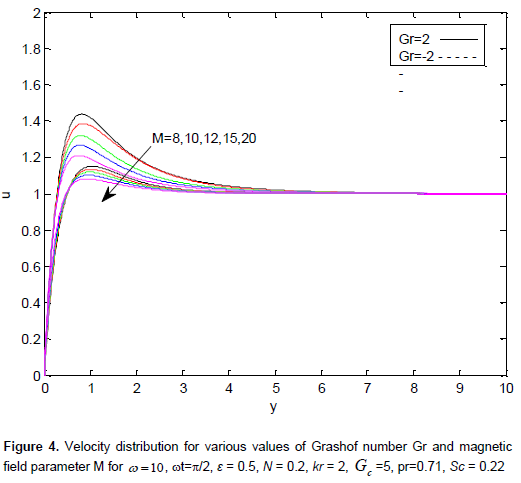 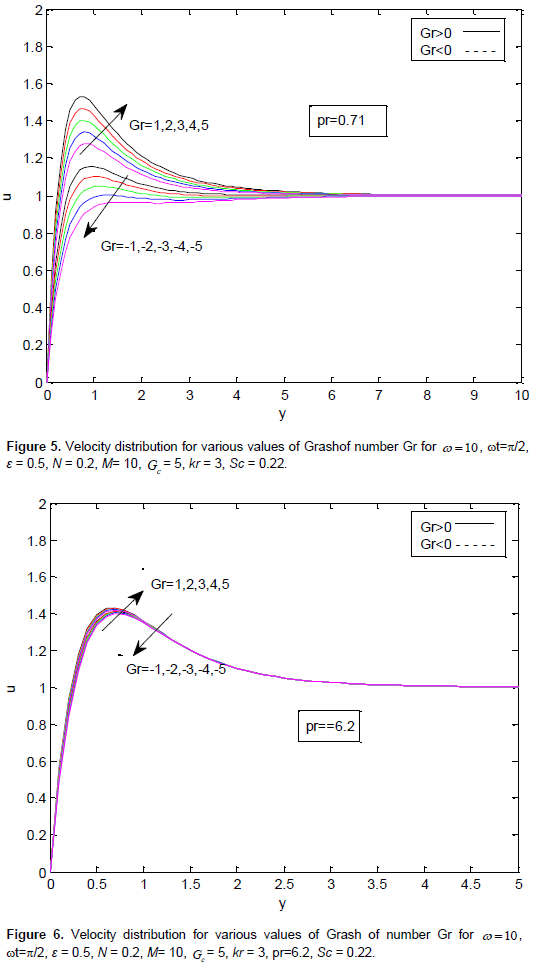 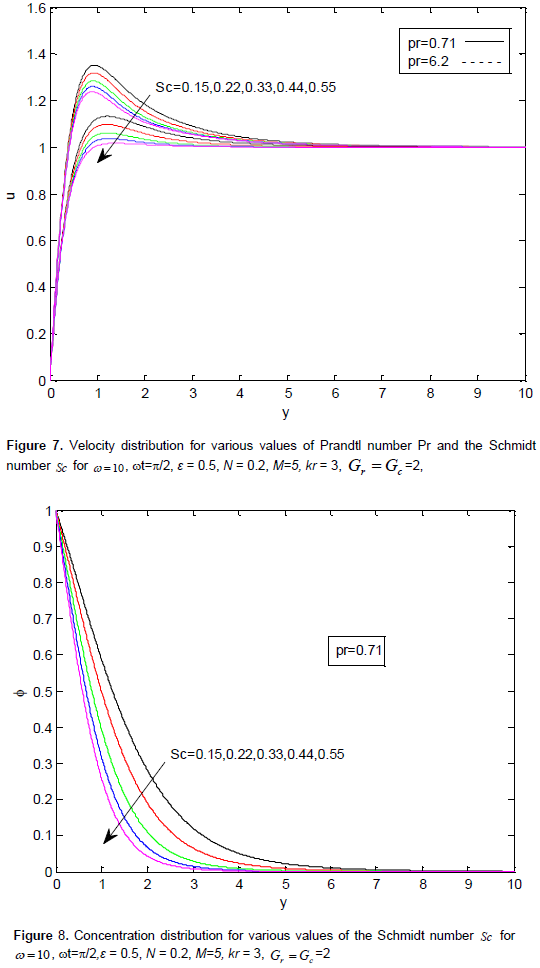 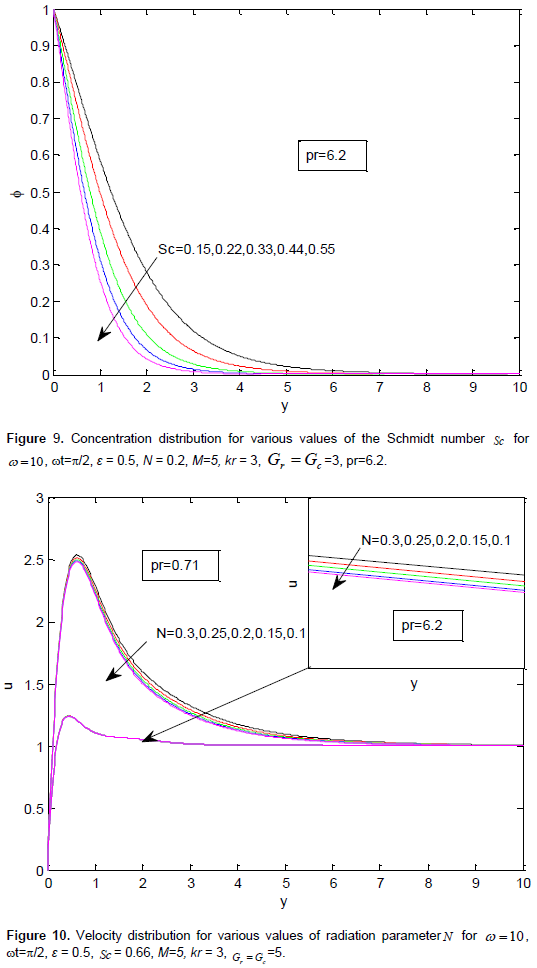 The temporal development of temperature with different values of time t is elucidated in Figure 11. It is clear that the velocity of the fluid decreases as time increases, which noted in the two cases of Prandtl number Pr =0.71, 6.2, this is more evident in the case of air than in water case. It illustrated that the influence of the various parameters involved in the problem on the velocity of the air is greater than the velocity of the water under the same conditions. Tables 1 and 2 show the effects of variations of Grashof number, modified Grashof number, chemical reaction, Schmidt number, magnetic parameter, frequency of the fluid and radiation parameter on the coefficients of skin friction, heat transfer and mass transfer, respectively for 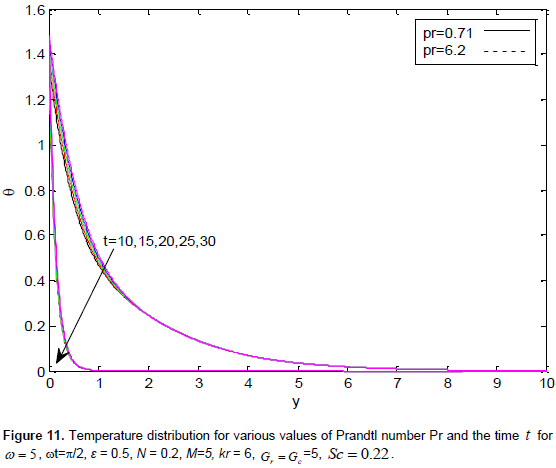 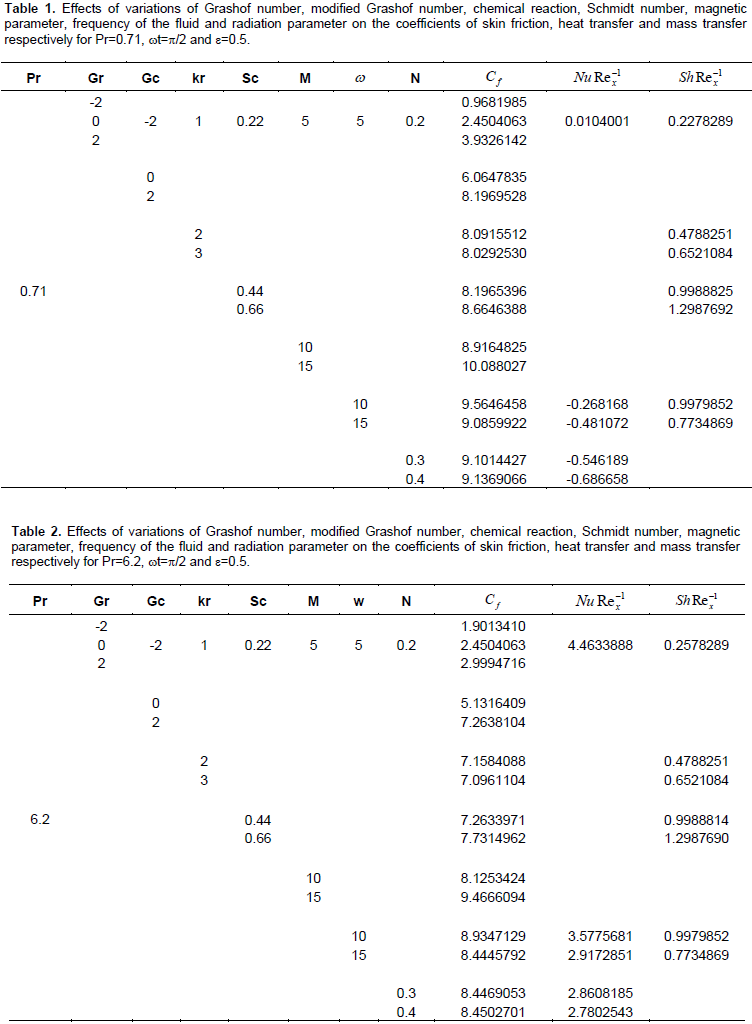 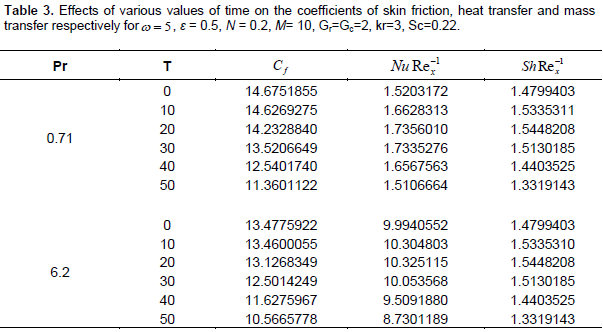 An analytical solution for two-dimensional oscillatory flow on unsteady mixed convection of an incompressible viscous fluid, through a porous medium bounded by an infinite vertical plate in the presence of chemical reaction and thermal radiation are presented. The governing boundary layer equations for the velocity, temperature, and concentration fields were solved using the method of small perturbation approximation. Numerical evaluation of the analytical solutions was performed and the results were presented in graphical and tabular form. This was done to illustrate the influence of the various parameters involved in the problem on the solutions. Two cases can be considered air

. It can be concluded that the velocity in the case of cooling and heating decreases near the boundary with an increase in the chemical reaction. Also, increasing the chemical reaction is to decrease the concentration profile throughout the boundary layer. Also, it was found that for two values of Prandtl number, under study, the concentration distribution decreases as the Schmidit number increases. Moreover, the Nusselt number decreases as the Prandtl number increases. It is interesting to note that the rate of heat mass transfer increase with increasing time for both air and water when

, while the reverse behavior is observed when