This research presents the design of a simple and compact yet sensitive gamma detection system which finds optimal utility in student research and demonstration purposes. The design is based on an Avalanche Photodiode (APD), a compact solid-state device. It was argued that, by the virtue of its concise size, simplicity and lower cost, an APD based gamma detection system is a better alternative in these applications as compared to the high-cost and complex Photomultiplier (PMT) based detector systems. This paper provides the basic working details of our design and preliminary test results.

Gamma detection constitutes an important area of nuclear and particle physics and finds its use in all standard undergraduate physics laboratories. Often, student research projects entail some kind of gamma ray detection and spectroscopy system, but such systems are quite expensive and sophisticated. The purpose of this study was to develop a low-cost physics laboratory gamma detection system which was simple and students can build it too under teacher’s supervision. As a result of the study, we came up with the design of a simple Avalanche Photodiode (APD)-based gamma detection and spectroscopy system. This research design is based on a commercial APD (Webb and Mclntyre, 1970; Wolff, 1954; Tsang, 1985; Razeghi, 2010) device, which is used in “Geiger mode” (Aull, 2016) to obtain a realistic and optimal design for the best possible single-photon gamma detection and spectroscopy system. APD’s are some of the most sensitive forms of photodiodes and in many ways better than other photodetector devices such as PIN diodes; thus we could not find a better low-cost alternative to the PMT (Photomultiplier Tube) for our application. PMT’s, other than their being expensive detectors, require a sophisticated detection system and high-voltage supplies of around 1500 – 2500 V, which can be cumbersome and expensive for small-scale college laboratories. The APD and its readout circuitry are mounted on a Thermo-Electric Cooler (TEC) plate to cool down the heat generated from the APD while used in operation. An organic scintillator is used in conjunction with the APD to convert the incident gamma rays into scintillations which could be detected and amplified by the diode. Final testing of the device is performed with a Cobalt-57 (57Co) source to identify the system’s detection capabilities.

An APD works on the process of internal multiplication and avalanche generation (Webb and Mclntyre, 1970; Wolff, 1954; Tsang, 1985). APDs are extremely sensitive and high-speed solid-state semiconductor photon detectors. Compared to other devices, such as PIN photodiodes, they have an intrinsic region (Figure 1) where the process of electron multiplication is carried out with a bias voltage. Detected photons create an electron-hole shower in the depletion layer of a silicon photodiode structure and the resulting electron-hole pairs move towards the respective PN junctions at a speed of up to 105 m per second, depending on the electric field strength. A practical implementation of an APD diode is illustrated in Figure 1 (Courtesy Hamamatsu Corp.), whereas Figure 2 illustrates a view of some commercially-available APD devices (Courtesy Photonix Corp.). Gain for such commercially available devices is typically in the range from x10 to x300, but there are APDs available from specialist manufacturers with gains of thousands. This can then give a significant advantage over regular PIN photodiodes for applications The APD Gain (M), also known as multiplication factor, can be expressed as (Tsang, 1985);

where L is the space-charge boundary for electrons, and a (x){\displaystyle \alpha } is the multiplication coefficient for electrons (and holes). The excess noise (E) at a given M, during the avalanche process, is expressed as (Tsang, 1985); where k is the ratio of the hole impact ionization rate to that of electrons.

This research design is based upon a commercially available simplest possible APD device which is operated in the “Geiger Mode” operation (Claycomb, 2016). When biased above the breakdown voltage, that is, in the Geiger Mode, the avalanche photodiodes are capable of detecting single photons. This operation mode is called Geiger mode for analogy with the x-ray detection and the APDs that show this capability are called single-photon avalanche diodes (SPADs). In order to reach those capabilities, the APD must be connected to a quenching circuit (Figure 3), which should be able to attenuate the avalanche multiplication and subsequent current increase after the detected photons are registered. The simplest passive quenching circuit is a resistor connected in series with the APD (Figure 3a and b). With the help of this technique an incident photon is absorbed in the window of the negatively biased APD, and by means of consecutive multiplication events, the initial charge is amplified up to mA levels. 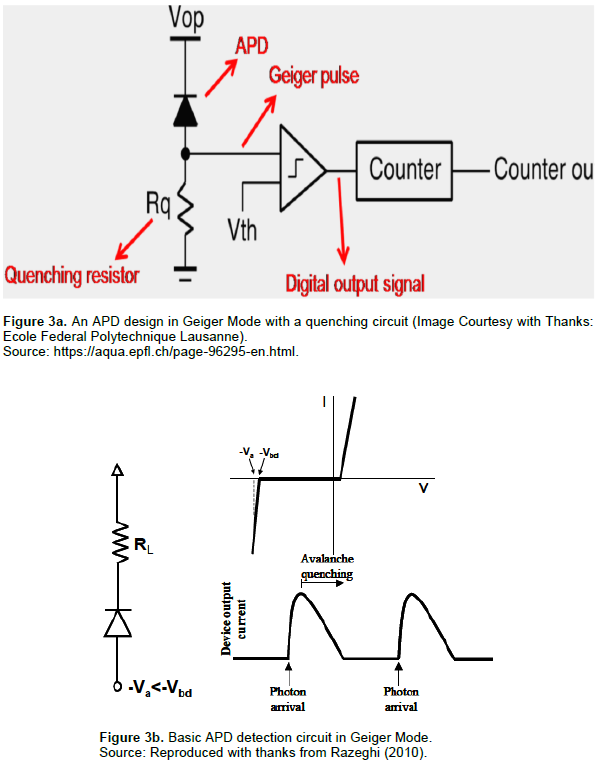 A discriminator circuit is mandatory, in general, to detect the pulse. A discriminator helps determine which pulses result in a count and which ones are neglected. However, in our project, we do not use a discriminator, instead we utilize this function in the software (in the DAQ routines). Figure 3b illustrates an APD in Geiger mode and the process of avalanche photodiode operation. Figure 4 illustrates a basic APD detection circuit with a bias voltage, upon which a practical APD light detection and spectroscopy system can be built. Working on similar lines, our design is based upon a modern APD device; the MATPD-06-001 from MarcTech Optoelectronics, Inc. (Latham, NY, USA), a photograph of the device is illustrated in Figure 5, whereas Table 1 lists its important specifications. Figure 6 illustrates a block diagram of our designed system, which is added to a scintillating stage to convert it into a complete gamma ray detection system. This scintillator could be a simple plastic scintillator or a sophisticated NaI/CsI scintillator. We first used a combination of plastic sheets to test our device before we could connect it to a proper scintillator. As shown in the block schematic, an APD is used while being coupled to a transparent scintillator block. The APD is itself mounted on a cooling system (based on a commercial Thermo-Electric Cooler (TEC) plate device which cools it down to about -20°C. 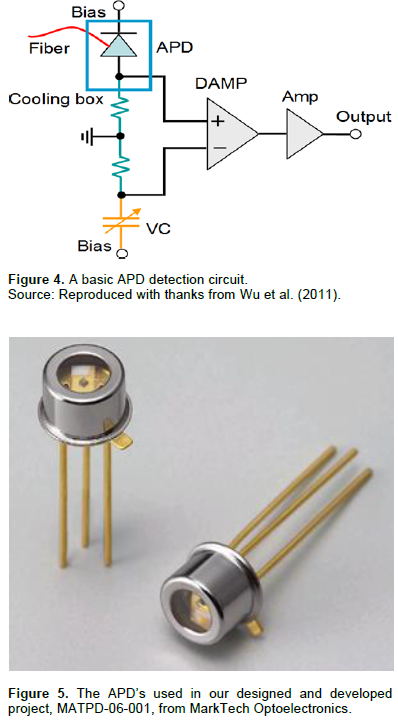 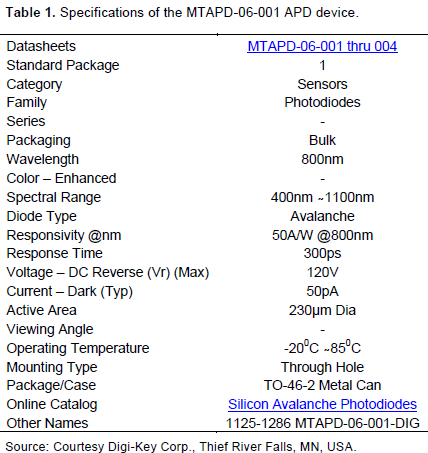 There is a temperature controller and Hi-voltage bias system to control the temperature as well as provide a bias voltage to the APD (we use a bias voltage of 91 V with the help of a battery farm). A current to voltage converter circuit converts the current into voltage whereas an Instrumentation-grade differential amplifier amplifies this voltage and the output is read by an oscilloscope or a Data Acquisition System. We use an Agilent/Keysight DSOX 400 MHz Digital Storage Oscilloscope for time-domain signal analysis. Figure 7 illustrates a circuit schematic of our detector amplifier, which is based on three stages. In the first stage, an APD is biased through an appropriate quenching circuit with a bias voltage. 100 KW is for the Geiger Mode, for single photon detection, and 10MW is for the normal APD operation. The two back-to-back diodes are used for protection of the APD and amplification circuit against voltage spikes. The second stage is a current to voltage conversion system which converts the APD photo-current into voltage using a high-resistance feedback. The 2pF small-value capacitor is used for stability. The output of this stage is passed through a Low-Pass RC passive filter to the third stage which is a simple gain of 10 non-inverting voltage amplifier, which further amplifies the weak signal to a reasonable magnitude to be read by output device. 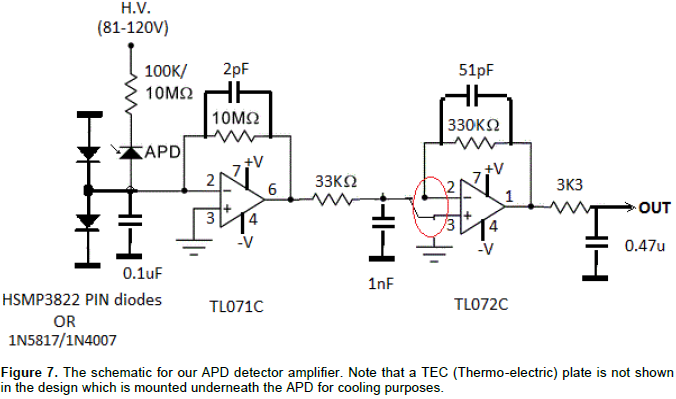 We employ a simple JFET based Operational Amplifier combination using Texas TL071C and TL072C amplifiers (TL071, 2017), however for higher precision, an instrumentation amplifier from Analog Devices, AD8421 could be used (AD8421, 2012). Working design of a detector and spectroscopy system using a specialized instrumentation amplifier device has been reported in an earlier report (Bukhari and Shah, 2016), and could be employed here replacing TL072C with necessary modifications. Techniques for constructing such circuits and laying out the PCB layout for instrumentation amplifiers has been reported elsewhere (Claycomb, 2016). Some views of the prepared prototype are given in the Figure 8a and 8b. The color code of the ribbon cable connections are; RED: +12/9V, YEL: -12/9V, GRN: 0V, ORA: Signal Output, VIOL: APD Bias Voltage (+81-120VDC), BLU: APD Bias Voltage Ground. Figure 8c shows a view of a typical plastic scintillator, a commercial device available in market (Bicron Corp. (Canaan, CT, USA). It was quite suitable for this project, however a CsI:TaI or NaI:TaI crystal would be a much better choice, especially for spectroscopy applications. After fabrication, the APD and Scintillator blocks are enclosed in a dark light-free enclosure, with only a small opening open for the gamma radiation to enter. 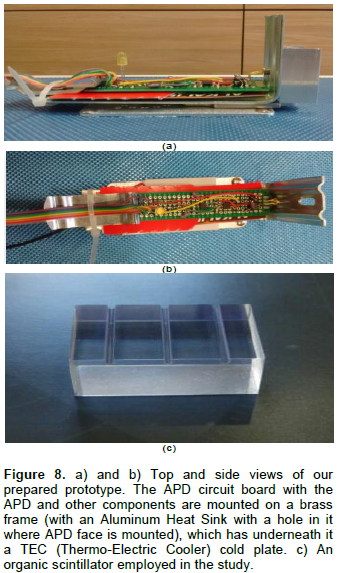 After completion of the system, detailed tests were carried out and results were obtained. We present here our preliminary results, as shown in Figure 9, some measurements of noise as recorded with our system. The figure shows some pulses as detected with the APD system including noise, as measured with our test plastic scintillator without. Figure 10 illustrates gamma detection events measured with an organic scintillator detector, as emanated from a Cobalt (57Co) source. Two conspicuous peaks, a primary peak at approximately 122 keV and a secondary peak at 136 keV, whereas a few low-count peaks are seen at the region of 30-60 keV. Figure 11 illustrates a completed prototype with an organic scintillator (different from the one shown in Figure 8c) wrapped in black tape to block external light. 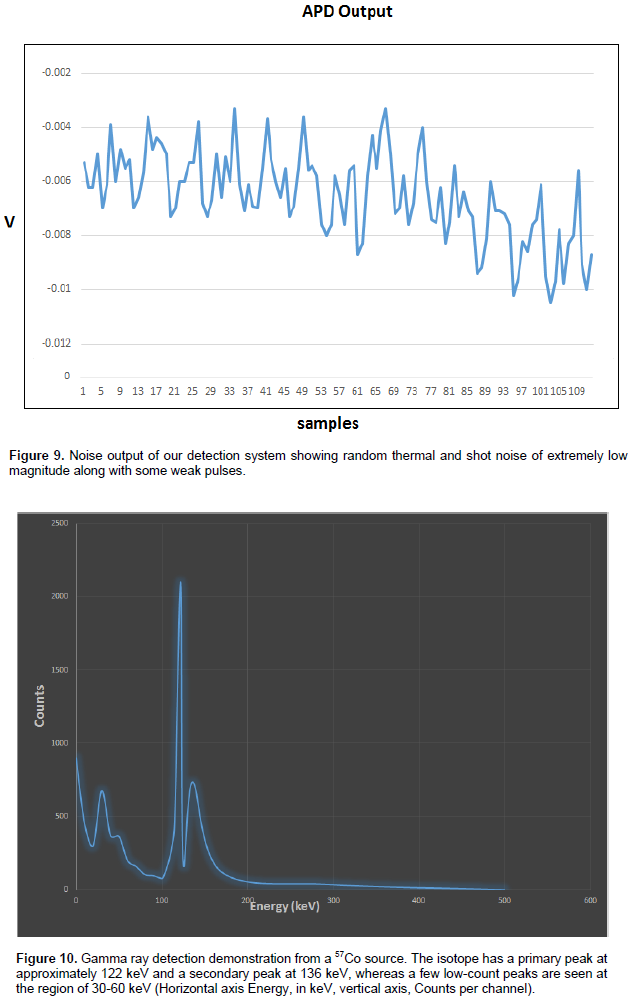 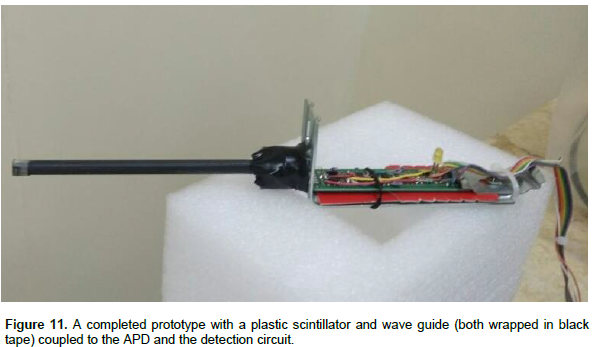 The design and test of a practical, simple and effective low-cost gamma detection and spectroscopy system were carried out, important details of which have been reported in this paper. The circuit designed may not be the best of its kind. With necessary modifications in the APD biasing scheme and detection circuit, both precision and efficiency of the system can be improved. Since APD devices are finding viable usage in many other science and engineering applications, this design could be modified for use in a variety of areas. For instance, this design can be used in quantum information (Wu, 2011) and quantum computing as well.