The aims of this work were clearly to assess the norms of radiation protection for building residents against natural radioactivity. This was done through measurement of natural radioactivity in building materials using gamma ray spectrometer. The annual effective dose (HR) linked to natural radioactivity was computed to estimate the radiation hazard in building materials. Obtained concentrations of these natural radionuclides and the calculated radiation hazard were compared with the national recommended values by natural limits by the Saudi standard code for radiation protection. The findings in this work of natural radioactivity levels were below the acceptable limits of 1 mSv/year which were found near the border of these limits. Therefore, it was found that the building materials may be safe to be used as construction materials. The annual effective doses were 0.8 ± 0.2 mSv/year for ceramics, 0.08 ± 0.02 mSv/year for adhesives, 0.6 ± 0.28 mSv/year for porcelains, 0.2 ± 0.1 mSv/year for marbles, 0.01 ± 0.01 mSv/year for paints, and 0.015 mSv/year for gypsum materials. The obtained results were compared with Monte Carlo N-Particle (MCNP) simulation. MCNP simulation was formulated to calculate the indoor gamma dose rate from the activity levels of the building materials which can take sample into very precise level. This computation was utilized to assess the uncertainty in the estimates. The results of MCNP were presented and an evaluation of the reported data shortly discussed. The radiation experimental values are in good agreement with the MCNP values, indicating that the obtained results are precise. Materials covered in the study are marbles, ceramics, adhesives, porcelain, paints, and locally produced cements.

Natural gamma radiations of indoor exposure owing to building materials, primitively quantified in building materials, is regarded as more significant than outdoor exposure. Natural radionuclides are always present in building materials but in various concentrations. Building materials often contain thorium and uranium decay seriesradionuclides; therefore radiation exposure arises mostly from Th-232, U-238 series, and K-40 (Dhanya et al., 2015; Usikalu et al., 2015; Mehra and Bala, 2014).
It is not only feasible but also more essential to assess the radiation hazard by computing indoor external dose by means of experimental and theoretical measurements. As the state-organization of King Abdualziz City for Science and Technology (KACST) is responsible for radiation protection by performing studies on natural radioactivity in dwellings, this work was mainly devoted and carried out to assess the contents of natural radioactivity in commercial building materials utilized in construction projects in Saudi Arabia. Also, the second aim of the work was to compare the obtained experimental data with Monte Carlo N-Particle (MCNP) mathematical model data.
Doses rates within buildings can only be detected with radiation measuring instruments like the high-resolution gamma-ray spectrometry system which consists of coaxial hyper-pure germanium (HPGe) or NaI detectors. It is also possible to quantify indoor exposure even before the building construction can take place. In this case, mathematical computations for example, MCNP, can be used to evaluate radiation doses from the reported data (Mehra and Bala, 2014; Abdo, 2010).
MCNP is the most widely-utilized method of trusted modeling of external radiation exposure in complex environments such as building materials. MCNP simulation can permit the regarding radiation transport with a very high value of precision. However, the main drawback of MCNP method is the requirement of having high performance computers (Al-Jundi et al., 2009). Koblinger (1978) was the first scientist who used MCNP method within a model to estimate dose rates in air at a point within model room. Although due to low performance of the 70's computers, the model is considered as standard and most highly appreciated model (Romano and Forget, 2013). Other researchers used different approaches. They used various methods of point-kernel integration over volume with analytical methods. The analytical methods can be easily applied for simple geometries whereas MCNP can be used for complex geometries (Zio, 2013).

The collected samples were crushed and then homogenized. The homogenized samples were filled into 1000-ml Marinelli beakers which were later hermetically sealed with the help of commercial polyvinylchloride (PVC) to prevent the escape of airborne Rn-222 and Rn-220 from the samples. All the samples were accurately weighed and stored for a period of at least one month prior to determination in order to attain radioactive secular equilibrium between Ra-226 and Rn-222.
In this study, sample activities in building materials were measured using HPGe detector with highly passive shielding and low background located at KACST. The detector was cooled with liquid nitrogen cryostat to reduce the leakage current. To reduce the background radiation from natural sources, the detector was enclosed in a 10 cm thick cylindrical lead shield. The lead shield was graded with an inner layer of thick copper to reduce any influence of fluorescence. The detector was connected to a pre-amplifier, shaping amplifier and high voltage power supply which were used for conversion of the observed energy into a pulse height spectrum. The pulse amplitude was converted to a discrete number through more 8,000 channel multi-channel analyzer (MCA). The data acquisition, display, and analysis of spectra were carried out using Genie 2000 software.
The relationship between the channel numbers corresponding to absolute energies was determined. The specification of the used instrument is listed in Table 1. In this work, mixed gamma standard containing radionuclides were used for energy set of calibration. Gamma-ray energies covered the range from 50 to 1836 keV. The main gamma-ray energy lines of interest are shown in Table 2. The gamma energies used for Ra-226 was 186.2 keV and different energies of 295.2 and 351.9 keV were also used for Pb-214. 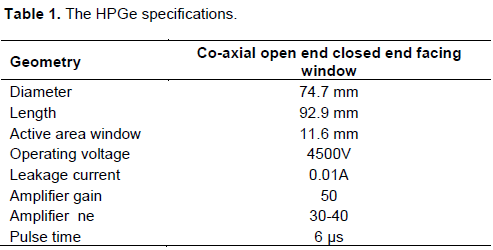 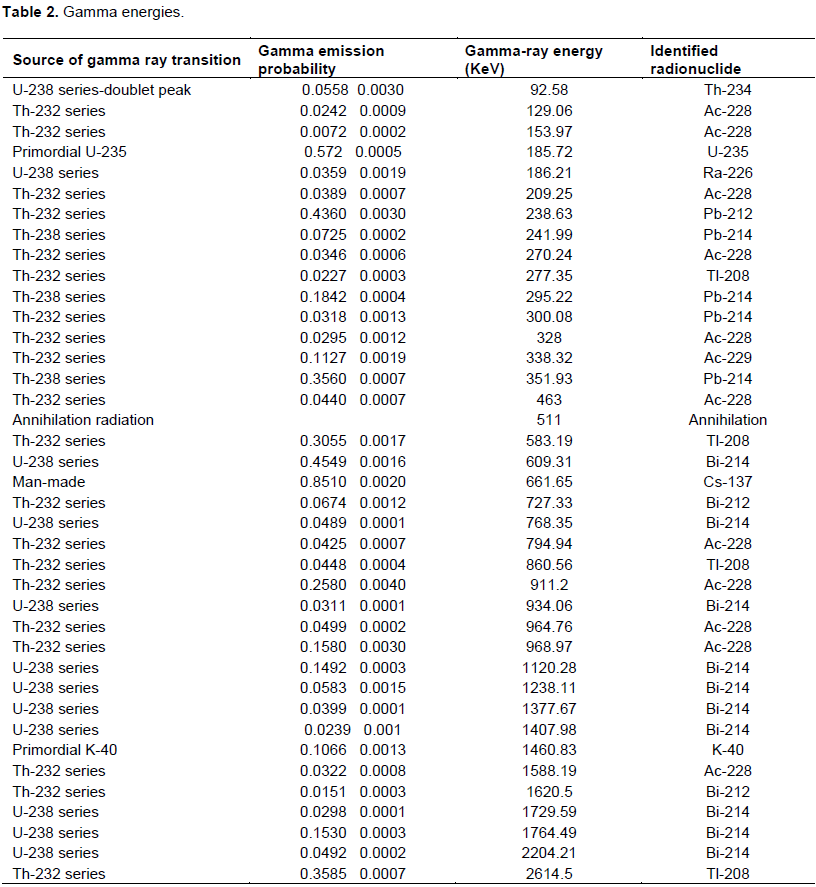 For gamma-ray spectrometry of unknown value, the detector efficiency measurement plays important role in gamma-counting. The full-energy peak efficiency can be computed through:

where A is the activity in Bq of the reference and P is the branching ratio of the radionuclide.
In order to remove interference between multi peaks, the calibration of energy efficiency was carefully carried. For every source, the energy efficiency was calculated using formula  (1) and the energy channels was calculated.
MCNP calculations
The used standard living room, room with dimensions of 4 m × 4 m × 3 m (W x L x H), was defined for the proposed model as illustrated in Figure 1. In the room, the floor was covered with ceramic. Thermo-luminescent dosimeter (TLD) position was in the center of the room, precisely 2 m from each wall and 150 cm above the floor. The density of the used building materials was assumed to be 2325 kg per m3. The thicknesses of the used building materials were assumed to be 0.20 m. The calculation of the dose rate conversion factors from our work was carried out based on MCNP code. The free-in air absorbed dose (nGy h-1) value in the center of the room was obtained using MCNP in present study as: 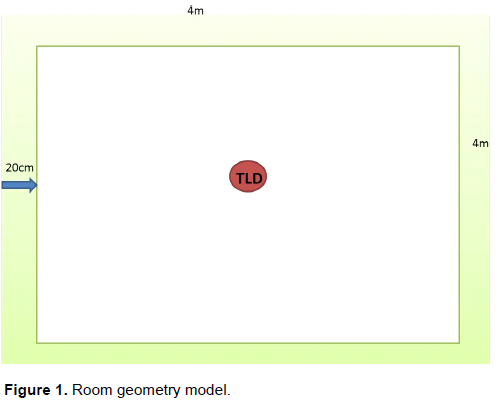 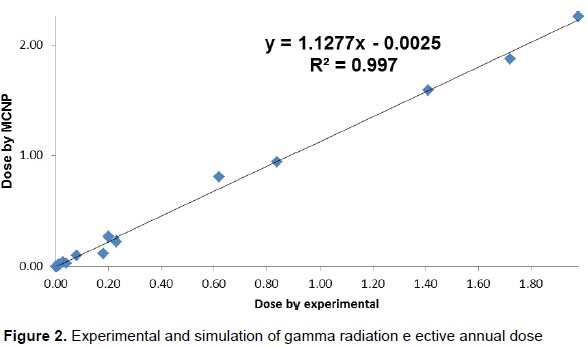 For ceramic materials, the maximum annual effective dose was approximately 1.7 mSv/year which is slightly elevated while the min value was 0.9 mSv/year, as reported in Table 4. The ceramic materials were still in acceptable range of mode value of safe side although the max value was over a unit. As always expected, adhesive materials are made out of organic materials where no natural sedimentary materials are added. The annual effective dose value of max value was less than 0.23 mSv/year, which was less than the recommended values (1 mSv/year) by our national regulation and International Commission on Radiological Protection (ICRP). 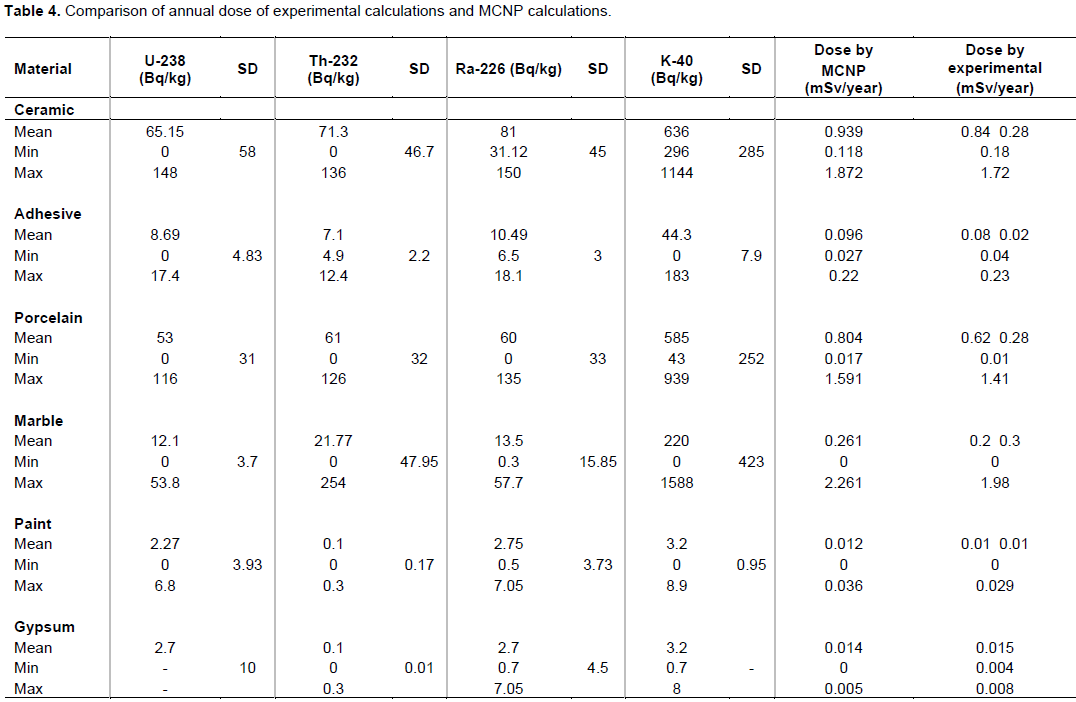