A study of the vertical Total Electron Content (vTEC) values as measured by the Nigerian GNSS Reference Network’s (NIGNET’s) GPS receiver in Calabar with geographic coordinates: 4.95°N, 8.32°E and geomagnetic coordinates: 6.46°N, 81.59°E has been carried out for some selected days in the year 2013. The results obtained are compared with the corresponding predictions of the three topside options for the TEC predictions (NeQuick, IRI01-cor, and the IRI 2001) of the International Reference Ionosphere (IRI) model (version 2012) over Calabar region. Despite some gaps in the measured vTEC values by the GPS receiver in Calabar, the results of this research shows high hourly and diurnal correlation of about 0.9 with the IRI-vTEC predictions for the days examined; thus supporting the viability of the receiver as a vTEC measuring device. The NeQuick option gives the best topside representation for the region.

Total electron content (or TEC), an important descriptive quantity in space weather studies, is the total number of electrons in the ionosphere integrated between two points, along a tube of cross-sectional area of one meter squared. Its unit is often given in multiples of the TEC unit (TECU), defined as 1 TECU = 1016.m-2 (Hofmann-Wellenhof et al., 2001). Because of its dispersive nature, the total electron content in the ionosphere is significant in determining the scintillation and frequency-dependent group and phase delays of radio waves through the medium. These observed carrier phase delays of received radio signals transmitted from satellites are manifested in the ionosphere above the equatorial ionization anomaly (EIA) regions, due to the high background electron density coupled with its rapid and complex variation (Guoqi et al., 2013). The magnitude and variation of TEC is related to the local time, solar activity, geomagnetic conditions, region of the earth and other sudden space weather events. Some researchers have estimated vertical Total Electron Content parameters using a single-frequency approach of Global Navigation Satellite System data and thereafter compared their results with those obtained from dual frequency measurements (e.g. Zhang et al., 2017; Win et al., 2016; Rao, 2017; Torben and Olushola, 2013).
Consequently, some other authors have carried out comparative studies on GPS TEC variations and International Reference Ionosphere (IRI) predictions for other regions in Nigeria. These include studies by Adewale et al. (2011), Okoh et al. (2011), Rabiu et al. (2011) and Okoh et al. (2012, 2015). As a follow-up to some of their recommendations, we have carried out a study of the vertical total electron content (vTEC) values as measured by the NIGNET’s (Nigerian GNSS Reference Network) GPS receiver in Calabar, Nigeria (Geographic coordinates: 4.95°N, 8.32°E; Geomagnetic coordinates: 6.46°N, 81.59°E) for the year 2013. The results obtained were compared with the corresponding prediction of the three topside options for TEC predictions (NeQuick, IRI01-cor, and the IRI2001) of the International Reference Ionosphere (IRI) model (version 2012) over Calabar region. The International Reference Ionosphere (IRI) is an empirical model developed (globally) to predict parameters in respect to radio propagation through the ionosphere. Some of these parameters include vertical profiles of electron density, electron and ion temperatures and the relative share of the different positive ions, vertical electron content, and F1 and spread-F probability. IRI is a working group, jointly sponsored by the Committee on Space Research (COSPAR) and the International Union of Radio Science (URSI).
It is generally regarded as the international standard for specifying ionospheric parameters (Bilitza, 2001; Bilitza and Reinisch, 2008; Bilitza and McKinnell, 2011; Okoh et al., 2012). In addition, as posited by Adewale et al. (2011), the accuracy of the IRI model on the specific region and/or time high since it is a data based model. IRI has several applications in areas such as aerospace-based engineering endeavours, space weather (through the provision of real-time atmospheric parameters), and visualization tools for educational purposes (Oyeyemi, 2014). Our motivation for this work stems from the fact that, since the installation of NIGNET’s GPS receiver in Calabar in 2011, no study has been carried out to evaluate its viability for the measurement of the vertical Total Electron Content (vTEC) over the Calabar region. In addition, we believe that the work will help fill the knowledge gap in modelling and predicting TEC values in the equatorial region using the IRI model. Again, this increase in knowledge of the ionosphere, especially for the African equatorial region, will enhance global efforts aimed at correcting ionospheric influences on the radio signals propagating through the region.

DATA SOURCES AND METHOD OF ANALYSIS

vTec from the IRI model
The three topside options for TEC predictions, namely; NeQuick, IRI01-corr, and the IRI2001 of the International Reference Ionosphere IRI (2012) model were used to obtain the predicted values of TEC over the Calabar region. In the modelling, the following optional parameters; sunspot numbers (Rz12), F10.7 radio flux (daily and 81-day), and the ionospheric index (IGI2) were not specified, while the foF2 storm model was switched on. The upper limit for electron content was set at 1500 km.
vTec from GPS receivers
The GPS data used for this work were obtained from the Nigerian GNSS Reference Network (NIGNET) project, established in 2008 by the Office of the Surveyor General of Nigeria (Jatau et al., 2010). The network consists of the state-of-the-art CORS (Continuously Operating Reference Station) GNSS (Global Navigation Satellite Systems) equipment, and is intended to implement the new fiducial geodetic network of Nigeria. In other words, NIGNET is expected to directly contribute for the AFREF (African Reference France) project. Apart from the above stated objectives, the NIGNET system also has the capability to acquire real-time ionospheric GPS data such as vTEC amongst others, in RINEX (Receiver Independent Exchange) format, which allows the user to post-process and get results that are more accurate. The post-processing and analysis of the RINEX data was carried out using GPS_Gopi_v2.9.3, a GPS_TEC analysis application developed by Dr. Gopi Seemala of the Indian Institute of Geomagnetism (IIG), Navi Mumbai, India (Seemala, 2014). The NIGNET GPS receivers measure pseudoranges and carrier phases at L1 (1575.42 MHz) and L2 (1227.60 MHz) and operates on two different carrier frequencies, namely, f1 and f2. These frequencies are derived from the fundamental frequency fo = 10.23 MHz, that is, f1 = 154fo and f2 = 154fo. The GPS receivers being a dual-frequency receiver measures the difference in ionospheric delay between the L1 and L2 signal. The group delay for a dual-frequency receiver is given by Ya’acob and Idris (2012).

Where P1 and P2 are the group path lengths, and f1 and f2 are the corresponding high and low frequencies respectively. The total electron content (TEC) is thus obtained from Equation 1 as follows:

The TEC value obtained from Equation 2 is called the slant TEC (sTEC), and it is a measure of the total electron content of the ionosphere along the geometrical path taken by the signal from the satellite to the receiver. Its measurement is based on the model that the ionosphere is a spherical shell at fixed height given by the centre of mass of the ionospheric profile at 600 km above the earth’s surface. The vertical total electron content (vTEC) is obtained from the sTEC values by using an appropriate mapping function given by Ya’acob and Idris (2012):

is the zenith angle at the ionospheric piece point (IPP), which is the user line of sight to the tracked satellite.

Half-hourly variation
The plots of the half-hourly variation of the three different topside options of the IRI model and the corresponding GPS-TEC values for the selected days: 31st January, 28th February, 30th March, 30th April,31st May, 30th June, 15th July, 30th September, 31st October, 30th November, and 31st December, 2013 were generated. Apart from July 15th, these dates were selected on the basis of their being the last of each month for the year under study. July 15th was selected because it was the only date having a complete data for that month, while no data was recorded by the receiver in August. The results obtained are as shown in Figures 1(a – k). 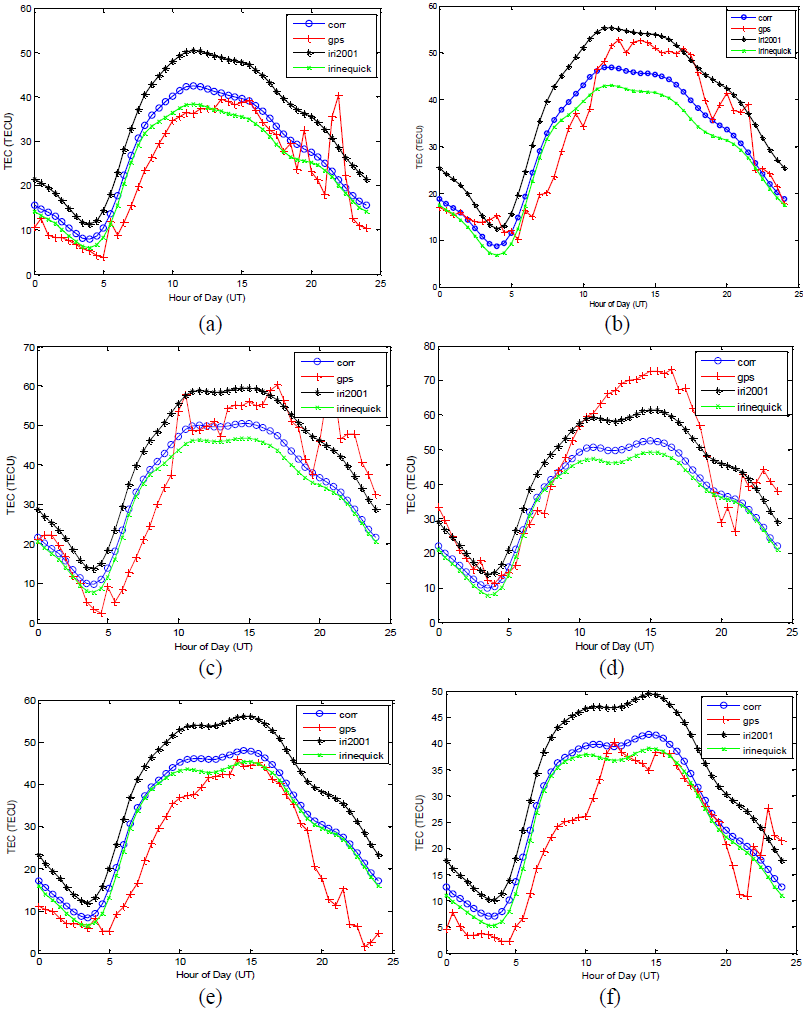 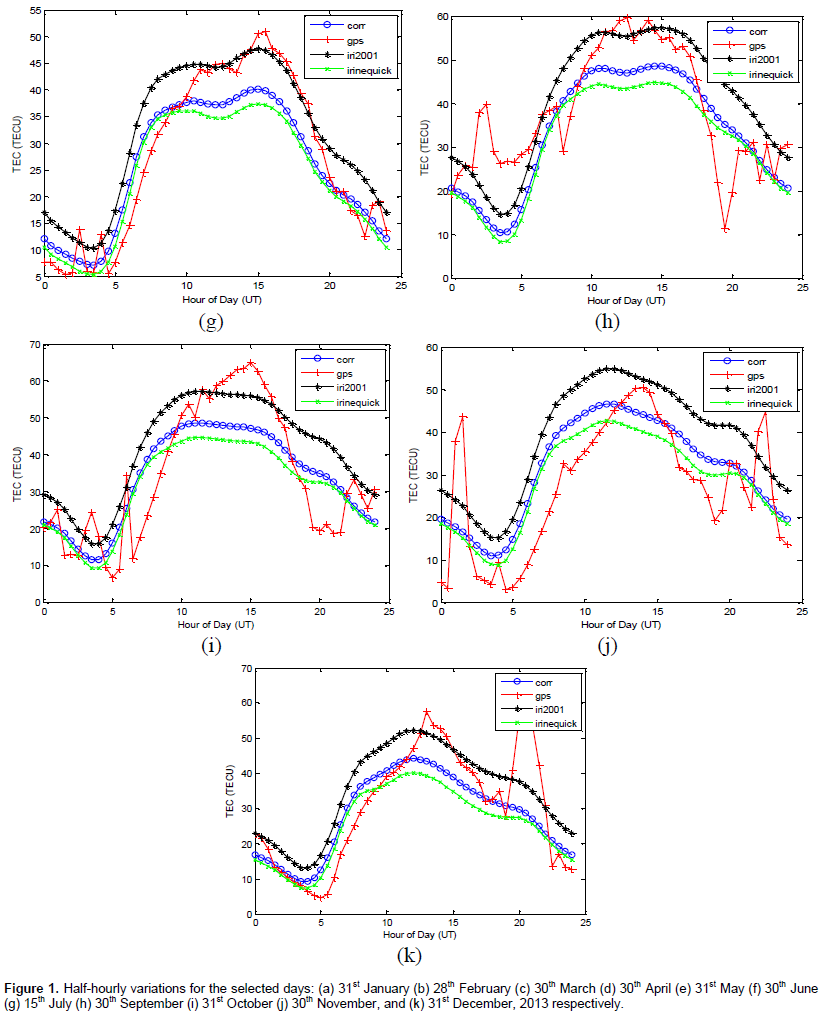 As can be seen from Figures (1a – k), the trend of both the GPS and the three IRI models are quite similar, albeit with some slight disparities. Consequently, for all the eleven days considered, the TEC values were higher during daytime compared to night-time with the TEC values increasing abruptly from dawn (0600 h), reaching peak values during the period 1400 - 1700 h (UT) before falling abruptly at dusk (1800 h). These maxima coincide with the time suggested for high solar ionization activity in the ionosphere, and agrees with similar studies carried out for other regions in Nigeria by Adewale et al. (2011), Okoh et al. (2011), Rabiu et al. (2011) and Okoh et al. (2012). In order to further elucidate the comparative variations of vTEC from GPS and IRI models (through similarities in trends and profiles, and how close the values are), we calculated the correlation coefficients (Table 1), the root-mean square deviations (RMSD), and also the percentage root-mean-square deviations (%RMSD) (Table 2) of the IRI-TEC values from the GPS-TEC values for the eleven days using the standard algebraic expressions for evaluating these quantities. The results as shown in Table 1 inferred that there is a very high correlation coefficient (in most cases, of about 0.9) between the GPS TEC values and all the three topside options. In addition, the root-mean-square deviations were relatively low, ranging from 19 to 31% for the nequick option, 16 to 36% for the IRI 2001 option, and 17 to 58% for the IRI 01-cor option. These high correlation coefficients and relatively low RMSDs between the GPS and IRI TEC values thus support the use of IRI model to predict the GPS TEC measurements over Calabar region.

Year-round day-to-day variations
The plots illustrating the year-round day-to-day variations of the GPS TEC and IRI model-predicted TEC values at dawn (0006 UT), mid-day (0011 UT), dusk (1700 UT), and mid-night (2300 UT) are given in Figures 2a to 2d. The hourly correlation coefficients and the corresponding RMSD and %RMDS for all the days of the year are presented in Tables 3a and 3b respectively. 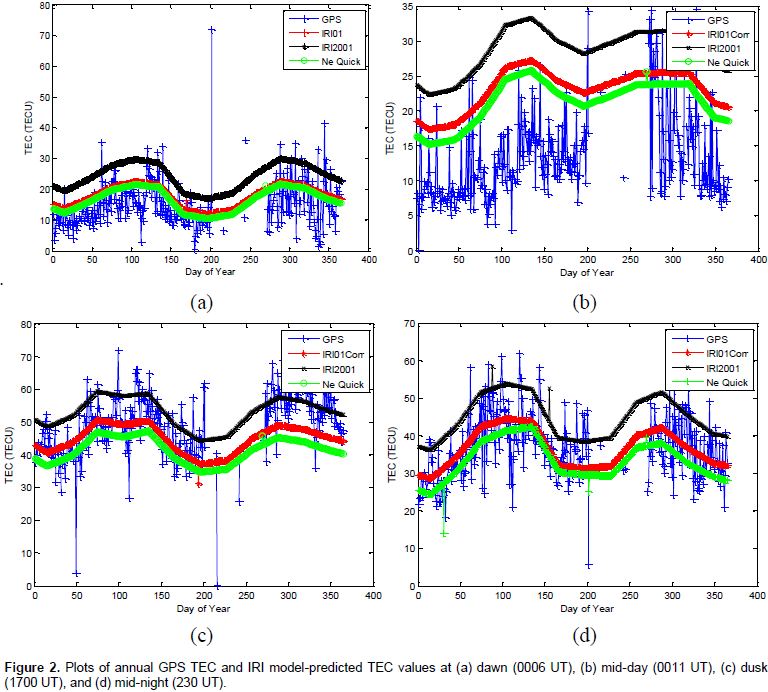 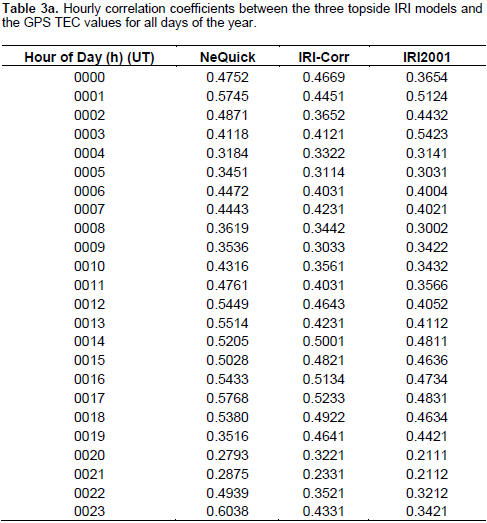 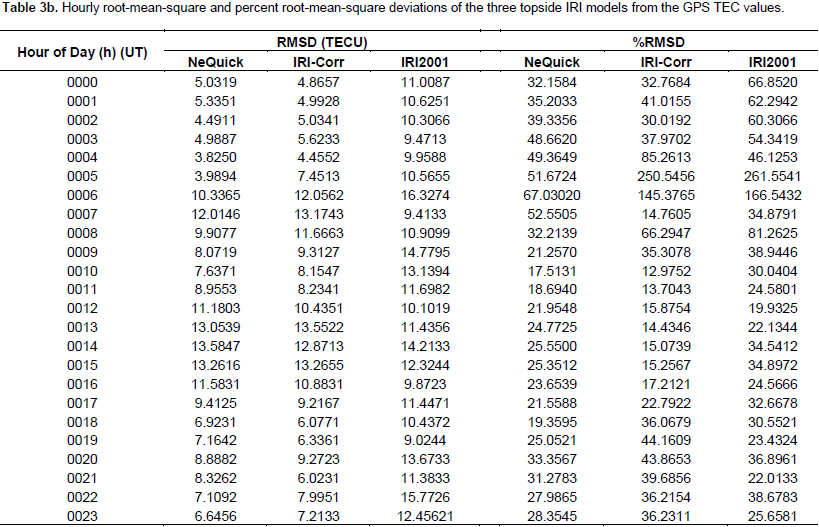 We have carried out a comparative study of NIGNET’S GPS vTEC measurements with the three topside IRI - vTEC predictions over Calabar, Nigeria for the year 2013. The results obtained show that despite some gaps in the measured vTEC values by the GPS receiver in Calabar, there is a high hourly, and diurnal correlation (about 0.9) between it and the IRI-vTEC predictions for the days examined. This strongly supports the viability and use of the receiver as a vTEC measuring device. Furthermore, of the three topside options, the NeQuick option gave the best topside representation for the region. In other to validate the predictive value of the IRI model over Calabar region, similar work should be carried out in the same area. This will help to determine an agreeable upper integration height for the IRI models for which the RMSDs from the GPS-TEC values are minimal. In addition, studies should be carried out in the region during years of high solar activity.

The authors express profound gratitude to the Nigerian GNSS Reference NETwork (NIGNET) project, in the Office of the Surveyor General of Nigeria for providing the GPS data used in this work. In addition, many thanks to Dr. Gopi K. Seemala of the Indian Institute of Geomagnetism (IIG), Navi Mumbai, India for granting access to the GPS TEC analysis software, and to Dieter Bilitza and the IRI group for making the IRI models available.