Possible selves of a hashtag: Moving from the theory of speech acts to cultural objects to interpret hashtags

In recent years hashtag studies have increased their numbers. The role of hashtags becomes increasingly predominant in social media studies. Many researchers wonder how to study them, ending up treating them in an aggregate way and turning to big data and static-mathematical modeling. This type of studies seem to consider hashtags as tools, favoring a single analysis perspective. In fact, The studies and the research carried out in the field of social media deal with what users do with hashtags. This paper wishes to propose a different perspective. The question raised here is not “what users do with hashtags,” but “what they do to hashtags.” This theoretical approach presupposes a change in the perspective based on the reading of hashtags as speech acts, which impacts the construction of social reality and identifies hashtags as cultural products. This interpretative path of cultural nature seems to be necessary in order to be able to look at the hashtag as a concept that changes its meaning through human interaction. The consequence of inserting this perspective is that the hashtag becomes a multidimensional concept, which in order to be analyzed must be decomposed and analyzed in all its possible dimensions. If the aim of the research is to reconstruct the sense and meaning of the hashtag.

In recent years studies on hashtags have increased the number of their appearances in trade journals and books and hashtags are starting to be the subject and the object of continuous analysis by scholars. This depends on their strength to aggregate people and allow them to express feelings and emotions. The hashtags studies have analyzed the phenomena of social television and the relationship between social media and politics, leaving behind several questions, such as: What is a hashtag? What elements is it made of? Is its meaning unchanging over  time?  These  are  aporias,  doubts,  key  issues  on which to address the research, probably something about which the answer is still unknown or which has been little heeded. However, these are points that need to be resolved, if the attention of scholars today focuses on these connection-tools and on the effects they produce. These are points that need to be discussed, thematised, interpreted, if the goal of our work is the Verstehen.
The starting point of this paper is an attempt to understand and interpret the trend involving the current use of hashtags. In other words: Are they tools that are used only to index conversation  topics  and  daily facts or
are they something more? When hashtags appeared first, their  function  was   certainly   to   index  conversations.
However, today we cannot ignore the fact that they are multitasking tools. Whether it is an event, a protest, or the life of a star, a hashtag is made up of a significant (symbol) # and a meaning. It is a semantic content that is
formed by speech signs and mental images, continuously redefined through human actions and interactions.
Colleoni (2013) states that hashtags can serve as empty signifiers that invite the ideological identification of a polysemic orientation. Papacharissi (2016) defines them as signifiers that are not empty but open to definition, redefinition, and re-appropriation. They also signify the emotional component that users connect to events, the sense of public affection, or connected audiences (Boyd, 2010) that express their participation through the expressions of sentiments (Papacharissi, 2016). And while they connect people, themes, emotions, they broaden and modify their original meaning.
Therefore, there is something that goes beyond the label itself and opens up to new possible worlds of meaning, which need to be specified because only if we understand what hashtags are, we can identify their effects on the construction of social reality. Hence, we need to read them through epistemological, linguistic, cultural, and media lenses. In this paper, we place our attention on the hashtag - what a hashtag is and what its impact is on social reality. It is important to bear in mind that the point of view considered here is not a hashtag as a means, but as a purpose. In other words, we do not ask what users do with hashtags, but what they do to hashtags, and how many “possible selves” they allow to give them a shape.
A hashtag’s signifier and meaning are explored by its three-dimensional interpretation: 1) a hashtag as a speech act; 2) the affordances of the hashtags; and 3) a hashtag as a cultural product.

POSSIBLE SELVES OF A HASHTAG

What is a hashtag? How can its original meaning change giving  a way to its possible selves, that is to its implicit contents? What impact do hashtags have on social reality and what can we learn by studying them?
The interpretations given so far have allowed considering the hashtag itself, that is to focus on what it could be. In doing this, the theories of speech acts and of the construction of social reality have been used (Searle, 1969, 1995). They permit us to consider the hashtag as a cultural product (Griswold, 1997) and they open up to a perspective based on cultural objectivization (Mannheim, 1952) and sensemaking (Mannheim, 1952), concluding in a study carried out ex-post that what we know about a hashtag can be defined as retrospective sensemaking (Weick, 1995). If we allow ourselves to be guided by Griswold’s cultural diamond theory (1997), we have that a  producer creates a #hashtag; he/she inserts it into the social world represented by the social media; it is then reused by the receivers, in this case, the users of social networks, who by quoting or retweeting, transform it into a cultural product thanks to communicative affordances (Figure 1). 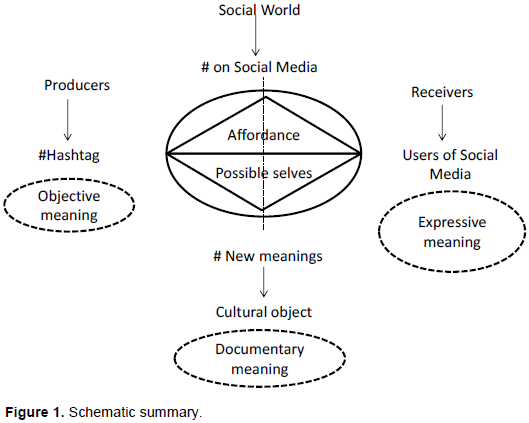 Transforming the hashtag into a cultural object, the receivers allow the hashtag’s possible selves to emerge. In all this process we can discover portions of meaning. The objective meaning is represented by the source; in other words, by the producer; the expressive meaning is used to trace and delimit the intention of the cultural product and it is included in the receiver's action; the documentary meaning gives information about what the hashtag becomes passing from one tweet to another. It is typical of the cultural object.