An empirical study discussing industrialisation and technical education in Ghana 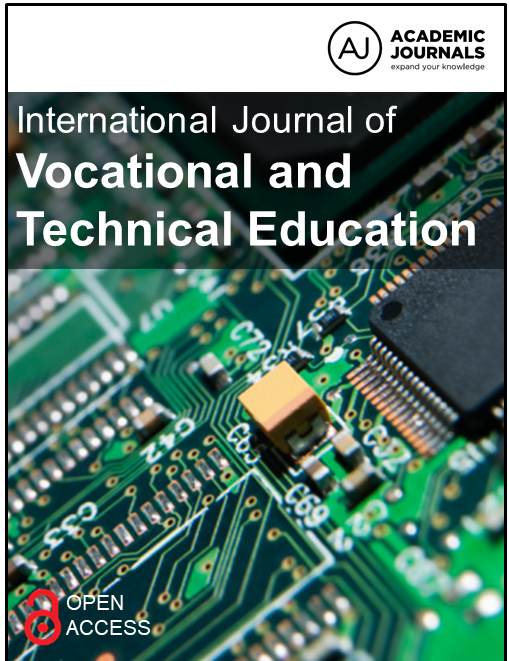 Industrialisation generally accounts for wealth creation in the economy of a nation. A technician is needed in building an industry and the technician needs to be trained through technical education. Ghana as a developing nation aspiring to develop her industrial capability needs to strategically position its technical education as a key factor. The objective of this paper therefore is to review Ghana’s industrialisation agenda and its technical educational system toward establishing an industrial base as a future cultural heritage. The soft operations methodology of ethnography, which is gaining much popularity in Production and Operations Management (POM), was adapted for this study. The findings, among other things, revealed a high interest in industrialising the Ghanaian economy, which is characterised by an absence of a policy framework for technology development to feed the industry. This is coupled with a disconnection of formal education from application of indigenous knowledge in production methods. This therefore calls for a policy-shift to build a comprehensive technical and vocational education and training (TVET) curriculum with linkage to culture for industrial growth.

This study is considered to be sensitive, complex and highly problematic as it concerns the long standing and chronic issue of Ghana’s industrialisation lag. Its tenets, indeed, cover the span of modern African history. The problem of Ghana, like the rest of Africa, still not having industrialised its economy, despite all the efforts by successive governments, makes it a unique situation requiring dedicated attention. As such; a suitable methodology for data collation and analysis will be sought or an appropriate one devised. A methodology that will not rely solely on deductions from numerical modelling and inferences to draw its conclusions (Collins and Stockton, 2018), but one that can give firsthand information is sought. This section therefore stretches the study beyond the natural boundaries of ’s research approaches to focus on humans as sources of data.
This section thus discusses the choice of the qualitative research methodology, ethnography, which was considered as the most practicable for such studies as this drawing on the work of Pelto, (2020). Its data collection methods such as participant observation, conversation and semi-structured interviews were found to be most suitable, thus employed to collect data from respondents on the ground. This is in addition to extensive literature reviewed. The detailed account of the methodology employed in this paper is outlined in the work of Donani (2014).
POM, as a problem-solving oriented discipline, employs a multidisciplinary approach in tackling issues ranging from a unit/section of a firm or factory to problems on a national scale (Tortorella et al.,  2018;  Kiridena  and  Fitzgerald,  2006;  Coughlan and Coghlan, 2002). Researches in POM are therefore traditionally inclined towards research questions that lead to the use of numerals which are generated for analysis using a mathematical model or statistical methods (Barratt et al., 2011). These methods are found mainly in quantitative research approaches, generally described by authors in POM as hard operations.
Such hard core methodologies are not convenient for addressing certain research questions that cannot be expressed in numerical figures (Bernard, 2013). These are research questions that pose complex, textual (non-numerical) and human centred research problems. These are often simply referred to by POM scholars as ill-structured problems (Simon and Newell, 1958). Methodologies found in qualitative research approaches, here called, soft operations (Seagriff and Lord, 2008) are often employed in addressing ill-structured problems. One of such soft operations methodologies is ethnography, which was employed in this study.
Ethnography gives elaborate procedure to study the culture of a people or organisation, or where culture makes an entry (Wolcott, 1990), here, to understand the culture of Ghana’s industrialisation and to position its technical education as a bridge. As a methodology, ethnography may however be faced with certain challenges. For example, the ethnographer views through the lens of informants, influenced by his/her own personal experience and cultural background. To mitigate such subjectivity, being a feature of qualitative researches (Barratt et al., 2011), a robust analytical tool for the corpus of data would be needed. As such, coding (in-vivo), as expressed in grounded theory (Corbin and Strauss, 1990) was employed. Narratives were therefore constructed from the data (Charmez, 2003), thus, reducing, if possible, eliminating the subjectivity inherent in reporting ethnographic findings (Gibbs, 2008).
Ethnographic study
Ethnography, by default, involves the researcher physically being present as a close observer or participant observer in retrieving firsthand information from respondents directly or through an informant. In addition to observation as a method for data collection, conversation, semi-structured and structured interviews were conducted over a period of one month and a week in both rural and urban settings. This involved living with the respondents in their locality and taking both written and digital voice records. Figure 1, with consent of participants, shows photographs of some of the interview sessions carried out. 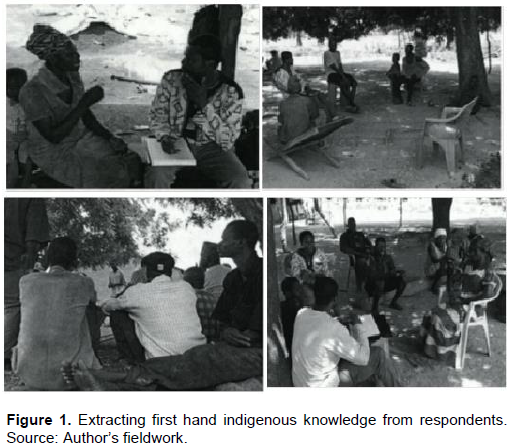 In addition, semi-structured and structured interviews were conducted. Among the interviewees in the rural setting include indigenous (local) producers (farmers, wood carvers, shea butter producers) in the community. The interviewees comprised a large nuclear family of about fifteen adult members and other members of the community. Interviewees from the urban areas included government officials from the Technical Vocation and Education Training (TVET) Unit of the Ministry of Education, Accra; Council for Technical Vocation and Education Training (COTVET) also in Accra; three Rectors of three different polytechnics (now technical universities); two Regional Officers (Managers) of GRATIS Foundation centres, two Directors, each, from the Ministry of Environment, Science and Technology (MEST), and the Ministry of Trade and Industry (MoTI). In addition to the interviewees, one self-employed entrepreneur and two shop owners, including a machinist were interviewed.
Analysis of the ethnographic data
Analysis of the corpus of textual data was done using the grounded theory techniques as postulated by Corbin and Strauss (2014) and in a constructivist’s approach (Charmez 2003). Grounded theory is a social science research tool that possesses a rigorous analytical feature (Figure 2). 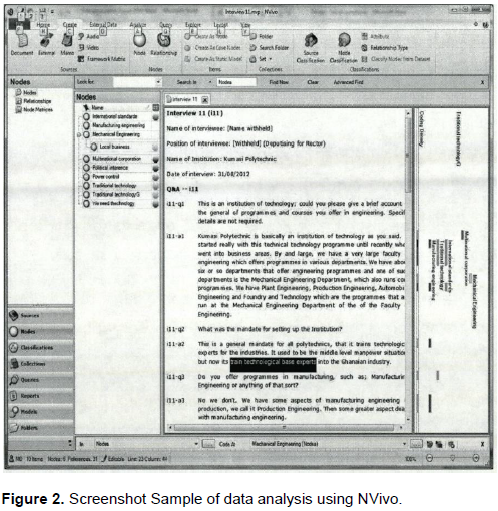 The analysis was done firstly by transcribing the interviews from the digital voice recording and secondly coding them into themes as they emerge from the data. Thirdly, the coded themes were sorted and similar themes categorised into thematic headings for discussion. By this process, the challenge of subjectivity in qualitative research is reduced.
The social science software package, NVivo, was used both to code and analyse the corpus of data. It was used to structure the coding process and retrieve the categorisation of the themes. Time and space will fail us to present the full analytical process here. Details of the analytical procedure used can be obtained from the afore-mentioned work of Donani (2014).
The screenshot shown in Figure 2 is a sample representation of part of the NVivo coding and analytical process.

In conclusion, this study looked at the industrialisation challenge in Ghana (as a subset of the African situation of low industrialisation) and how technical education could be positioned to help resolve the impasse. It was established in this study that industrialisation was indeed a cultural affair, thus, an effort to create a cultural linkage through technical education became an interest. A soft operations research methodology of ethnography was therefore adopted for the study, to obtain firsthand information not controlled by assumptions and speculations. The corpus of data retrieved was processed by in-vivo coding for grounded theory analytical approach. The NVivo software package was therefore used in the analysis of the data.
The findings showed that Ghana’s industrialisation policies were yet to deliver the expected outcomes. This study attributes the failure to the absence of culturalisation of Ghana’s industrialisation intent in addition to other possible factors. The study sees technical education as a possible vehicle to provide the connecting force with indigenous methods of production.
Technical education is positioned to provide the needed human resource for both local industry and foreign investors. Supplying the needed human resource to mainly serve foreign investor industry, would place the national economy continuously on the fringe and fragile pathway as noted by previous scholars.
Higher roles are now expected of Technical Education to fuse education with production as a cultural heritage.
This therefore calls for a policy-shift to build a comprehensive technical and vocational education and training (TVET) curriculum with linkage to culture for industrial development in Ghana.