Homestead vegetable gardening as a source of calorie supplement at Ishurdi Upazila, Bangladesh

Bangladesh is regarded as one of the most densely populated area of the world and all these cultivable land decreasing day by day for increasing of population. The development of Bangladesh depends largely on the development of agriculture sector which contributes 19.1% of the GDP (Bangladesh Bureau of Statistics, 2015). About 70.0% of the total population  lives  in  rural areas and their livelihood directly or indirectly depends on agriculture. So, agriculture is the backbones of the economy of Bangladesh. Vegetables are rich sources of essential vitamins such as A, C, niacin, riboflavin, thiamine and minerals such as calcium and iron. They contribute to the intake of essentials nutrients from other foods by  making them more palatable. Vegetables provide dietary fiber necessary for digestion and also essential for maintaining health curing nutritional disorders (Terry, 2011). According to the World Health Organization (WHO), a healthy individual should take 220 g of vegetable daily. In Bangladesh, the average per capita daily vegetable intake is 166.1 g, whereas the recommended intake is 250 g/day rather than China (292 g/day), Japan (432 g/day), Thailand (257 g/day) and also lowest among the countries of South Asia (Food and Agriculture Organization and World Health Organization, 2014). Vegetables not only minimize the malnutrition but also maximize the financial returns. Vegetable generate cash to the growers. It helps to reduce dependence on rice. According to modern science, eating excess rice, which we do in general, is not good from the health point of view. Thus, to fulfill farmers economic demand they are getting more involved in vegetable cultivation along with rice cultivation (Ali and Hauk, 2012). Only a small proportion of total cropped areas of Bangladesh are under vegetables production. Most of the agricultural production in Bangladesh is strenuous in rice, occupying about 75.0% of total cropped areas, whereas only 7.0% of the total cropped land is used for horticultural crops, including root and tuber crops (Bangladesh Agricultural Research Institute, 2017). In Bangladesh vegetables are grown in 2.63% of cultivable land (Bangladesh Bureau of Statistics, 2015). From this small proportion of the cultivable land area, the country produces about 0.176 million metric tons of vegetables annually, of which about 65% are produced in winter and the rest in summer. Therefore, production is not well distributed throughout the year and produce for domestic use is relatively scarce in the off-season (Department of Agricultural Extension, 2016). Vegetable production in Bangladesh has increased five times in the past 40 years and Bangladesh has scored 3rd in global vegetable production, next to China and India (Food and Agriculture Organization, 2017). A lot of vegetables are grown round the year in Bangladesh. Due to increase in the population of the country, there is a great demand of vegetables production. To meet the existing demand of the population, per unit area must be increased. This is possible by converting single cropped area into double, and double and triple cropped area into triple/fourth cropped area by using improved agricultural technologies, especially in vegetable cultivation. Farmers used to grow vegetables around the homestead area, but now-a-days a large number of farmers grow vegetables on commercial scale because vegetables cultivation is more profitable than that of cereal crops.
Homestead is the center of socio-economic activities and traditional cultural heritage of villages in Bangladesh. Homestead perhaps the most important production unit in Bangladesh, the number of which accounted about 25.36 million in the country with 21.90 million in the rural areas. These homesteads occupied about 0.54 million hectares of total cultivable land. The average size of the rural homestead is very small (0.02 ha), which varies widely according to region and socioeconomic status of the households (Bangladesh Bureau of Statistics, 2018). Homestead gardening in Bangladesh provides an excellent opportunity for farmers to produce a wide range of horticultural crops. All micro sites of homestead from home-yard to kitchen garden, and even roofs of houses help diversify household's diet through the production and consumption of the vegetables they produce (Prodhan, 2017). Nutrition problem is key issue along with food security in Bangladesh today. A small percentage of the people have access to nutritious food, whilst the majority is forced to survive on subsistence diets that are unbalanced and devoid of essential food ingredients. Generally, landless and marginal farmers are at more risk nutritionally than those of larger households. So, from the aforementioned point of view, the specific objectives guided the present study was to (i) describe the selected socio-demographic characteristics of the rural household heads, (ii) investigate the homestead vegetables production status of the households and (iii) assess the impact of homestead vegetables production on calorie supplement as family nutrition. 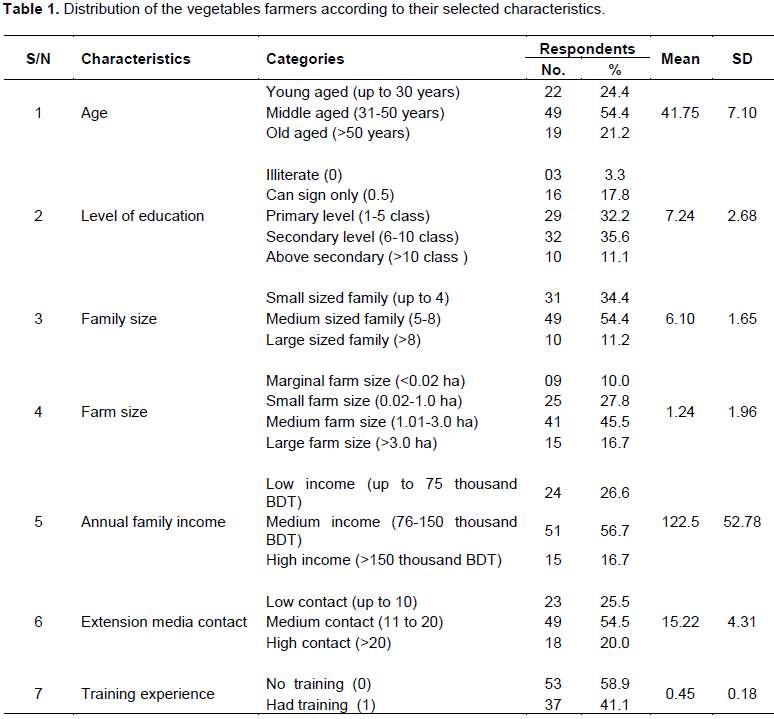 From the findings of the study, it is apprehended that the medium farm holding farmers consume the highest amount of vegetables from their homestead garden which was followed by small farm holding farmers and the lowest amount of vegetables consumption by marginal farmers. The medium farm holding farmers’ intake was about 3.2% of their total dietary calorie demands from homestead vegetable, whereas the small and large farmers’ intake was 2.2 and 1.7%, respectively. Marginal farmers have very minimum homestead area for vegetable gardening as they fulfill 1.3% of their total dietary calorie demands from homestead vegetable. Marginal and large farmers spent minimum time and consume fewer calories from their homestead garden. Lack of quality seed was the most vibrant problem of the study area. Other major problems regarding vegetable production in their homestead were high input cost, lack of capital and shortage of irrigation water. Department of Agricultural Extension and Department of Health may arrange motivational campaign along with functional training for farmers emphasizing the importance of vegetable intake to maintain sound health. Low cost quality seeds may be made available to the rural farm households, especially women.