Aflatoxin is  a  complex  mycotoxin  produced  by  the  rot  molds,  especially,  from  the genus, Aspergillus. They are low molecular weight secondary metabolite which had been implicated in human and domestic animal toxicosis  (Turner et al., 2007; Duru and Anyadoh, 2009). Among the existing aflatoxins, four had been reported to be found in contaminated food products infested with A. flavus and A parasiticus (Duru et al., 2011). They are aflatoxin B1, B2, G1 and G2. This is based on their characteristic fluorescence under UV light (Fabian et al., 2013). The aflatoxigenic strain of the fungi, A flavus and A parasiticus had been frequently isolated from postharvest ground nut seeds (Arachis hypogea L.), kernels of Irvingia gabonensis (Aubry – Lecomte ex O, Rorke) Baillon, seeds of Phaseolus lunatus Lin., Vigna unguiculata (L) Walp and grains of Zea mays Lin. (Adebayo-Tayo and Ettah, 2010).
Aspergillus belongs to the family of Aspergillaceae and is distinguishable from other fungi by bristly knoblike sporophore Kernels of I gabonensis constitute a serious staple soup thickener (ogbono soup), widely consumed in Nigeria and in diaspora. A matured plant of I. gabonensis is a tree of about forty meters (40 m) tall, cultivated as fruit tree crop. The leaves are obovate to elliptical; inflorescence, an axillary cyme. Flowers are fragrant, green and occur in short clusters. Fruit has spherical drupe with fleshy edible mesocarp and a stony endocarp. The kernels are cotyledoneous and lie within the endocarp. The Nigeria species belong to the Ixonanthaceae Planch ex Klotsch (formally Irvingiaceae Pierre) family. The stony endocarp is broken to expose the kernel which is removed and processed as edible commodity for market and domestic consumption (Nyananyo, 2006).
Nigeria is a country in the tropical West Africa. It occupies a stretch of 923,768 km2 within longitude 5°E and 15°E of the great meridian and latitudes 5ON and 100 N north of the equator. It has a population of over 150 million people, occupying a physically and climatically diverse ecological culture.  The ecological units range from the southern coastal wetland vegetation through the fresh water swamp, lowland rainforest, montane wood, derived savannah, Guinea savannah, Sudan savannah to the northern Sahel Savannah (Gani, 2011). Elsewhere in some parts of the world, aflatoxin sources and range stood as shown in Table 1 (Filazi and Sireli, 2013). A survey of this commodity at display shops and market places in these ecological zones of Nigeria, most of the times reveal rough, spotty and moldy surfaces. This necessitated the need to screen this all important food item for possible xenobiotics of public health importance. This study therefore aims at screening samples of the I. gabonensis kernels sold in these zones for possible aflatoxigenic mycoflora, the aflatoxin content and the severity coefficient in the study area. 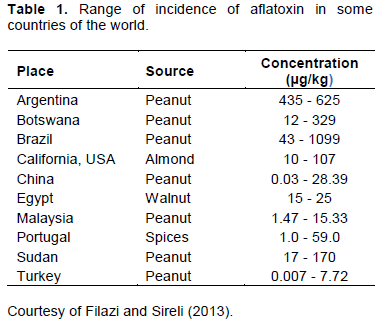 The study was conducted between the months of June and October each year for three years (2016, 2017 and 2018) within the nine geo - ecological zones of Nigeria (Figure 1).
Sample collection
Kernels of I. gabonensis were collected from display shops and marketing steads in the metropolis of the Nigeria states as shown in Table 2. Samples for the control experiment were obtained from the endocarp of fresh fruits harvested from the forestry unit of Agricultural Development Corporation, Nekede, Owerri, Imo State. Samples collections were made between the months of June and October each year for the three years. The kernels were collected from each location in separate sterile poly ethane bags and transported to the Biological Science Laboratory, Federal University of Technology, Owerri, Imo State, Nigeria; where the assay was conducted.
Sterilization
The test kernels from each state were separately washed several times under running tap water; then soaked in 0.5% sodium hypochlorite solution for 10 min. They were then washed in three changes of distilled water. The washed kernels were divided into two parts; one part is used for fungal isolation while the other is used for aflatoxin evaluation.
Fungal isolation
Blotter method was adopted in the fungal isolation, following the method of Jha (1995).  Some quantities of nine centimeter (9 cm), cellulose papers and distilled water were separately autoclaved at 121 kgcm-3 for 15 min before use. The filter papers were laid down in three layers Petri dish, moist with the sterile distilled water. The kernels  were placed too on each Petri dish. The dish complex was incubated at 29°C, for 14 days.
Extraction of aflatoxin
This followed the method of Hatem et al. (2005), using ELISA – Spectrophotometric direct competitive method kit. The kernels were autoclaved at 121kg cm-3 for 30 min, pulverized and made into a sludge. Twenty grams of the sludge from each group were homogenized with 100 ml of pure 70% methanol and filtered. The filtrates were used as the aflatoxinB1  test  extracts. The  microwels were labelled as follows; Blank (antibody + enzyme conjugated aflatoxin AF), Standard AFBI (antibody + enzyme conjugated AF + aflatoxin standard), Test sample (antibody + enzyme conjugated AF + test extracts). The set complex was allowed to react for few minutes. The reaction was stopped by washing in five changes of detergent solution. Then the enzyme extracts provided by the kit were added and signal monitored. The absorbance of blue spectrum was read at 460 nm.
Aflatoxigenicity test
Fresh kernels from endocarp of fresh fruits of I. gabonensis harvested from the Forestry Unit of Agricultural Development Corporation (ADC). Nekede, Owerri, Imo State, Nigeria were used in the investigation. The kernels were surface sterilized in sodium hypochlorite (NaOCl), washed in three changes of distilled water, dispensed, 50 g per conical flask, stoppered with absorbent cotton wool and aluminum foil, autoclaved at 121 kgcm2 for 30 min. One flask is kept as it is, and one flask is inoculated with sterile distilled water. These two serve as control while the remainder were inoculated with five days old fungi from pure cultures of the fugal isolates from the test samples in the order of one flask, one fungus for set ‘A’ and one fungus plus Aspergillus flavus in set ‘B’. The flasks complex was incubated at 29°C for 14 days. The kernels were washed, processed into sludge and tested for the presence of aflatoxin B1.

The test samples from all the states examined showed that the mycoflora that populate the kernels were A. flavus, A. niger, P. italicum, F. moniliforme, L. theobromae and R. stolonifer (Tables 3 to 5). The study area covers the nine distinct geo - ecological zones as follows, the coastal wetland vegetation, the fresh water swamp, lowland rainforest, montane wood, derived savannah, Guinea savannah, sudan savannah and the sahel savannah (Figure 1). The mold A. flavus appears as greenish – yellow meshwork and progresses to dirty dark green color on the Sabouraud Dextrose Agar culture. Micrograph reveals, septate hyphae, hyaline, coenocytic conidiophore, spiny conidia that are ornamented and occur in chains. The kernels of I. gabonensis are popularly called ogbono. It serves as soup thickener to the highly relished ogbono soup in Nigeria.

A total of six fungi were isolated (Tables 3 to 5). This concurs with the findings of Duru and Anyadoh (2009) on the rot fungi of postharvest I. gabonensis, from the Niger Delta region of Nigeria (Duru and Anyadoh, 2009). Aflatoxicosis, both acute and chronic, had been reported to constitute a serious debilitating ailment to human and livestock (Hatem et al., 2005; Oyelamin and Ogunlesi, 2007; Ashfaq et al., 2011). This disease condition is due to aflatoxin, a low molecular weight secondary metabolite produced by the Aspergillus species.
The obvious health implications of aflatoxin contamination of food and other edible materials need not to be emphasized. This informed the reason the world food and health bureau (WHO and FAO) placed the median lethal concentration (LC50) at 5 µg/kg (World Health Organization (WHO) (2006); FAO (2013). Aflatoxin B1 was detected in all the samples from each location in this study. It exhibited blue fluorescence under UV light. This concurs with the position of Adebayo and Ettah in the same subject matter (Fabian et al., 2013).
The quantification of aflatoxin in food commodities is an empirical assessment of Nigerian health conditions with regard to mycotoxicosis. The contents per kilograms per location per year are shown in Table 6. The quantities range from 9.5 in Abuja to 16.08 µg/kg in Rivers State (Table 6). This showed that the quantity of the poison consumed in every one kilogram of the kernels sold in Nigeria ranges between two to above three times the WHO standard (LC50) and the European Union maximum permissible limit of 4 µg/kg for food intended for direct consumption. Elsewhere in Africa, available records showed the range of 12 - 329 µg/kg from peanut in Botswana; 12 - 25 µg/kg from walnut in Egypt, 17 - 170 µg/kg  from   peanut   in   Sudan   etc.  (Figure  1).  These showed that the danger is even higher compared with that of Nigeria.
The severity indices per locations per period of the study showed the danger range as between 29.6 in Sokoto State to 60.6% in Benue State (Table 7 and Figure 2). The adoption of the formula for calculating the severity index used in this study was born out of the authors’ experiences in the pedagogy of Experimental Design and Biostatistics. The aflatoxigenicity test showed that aflatoxin B1 was generated in the fresh kernels inoculated with A. flavus in combination with any of the fungal isolate in this study. Single species inoculum, including  A.  flavus  could not generate aflatoxinB1 within 14 days, but single inoculum of A flavus did produce aflatoxin B1 after 14 days but the rest failed to produce same. This suggests that aflatoxinB1 is generated by A.flavus under nutrient constrain or as a result of antibiosis.

Within the scope of this study, the findings therein, it is evident, that the incidence and the quantity of aflatoxinB1 in the consumption pool of Nigeria, through the kernels of I. gabonensis are alarming. The profile of severity indices per zones signifies the potential danger posed by the presence of the aflatoxigenic strain of A. flavus to public health if contamination is not checked through proper sanitation and screening of food items, especially, kernels of I. gabonensis.