Energy is a scarce resource that must be studied, as it is essential for productive activities like agriculture. In this study, energy consumed for wheat production under conventional and zero-till in River Nile State, Sudan was assessed. Energy consumed for land preparation and harvesting was considered for each tillage system. Data on fuel consumption, energy equivalent factors, human and mechanical work rate/h and average yield during winter seasons from 2009 to 2016 were collected. Results showed that energy input of about 19,395 and 16,798.7 MJ/ha for energy ratio, which is an indicator of sustainability ranges from 1 to 2 and 1.3 to 2.9 for conventional and zero-till, respectively during the study period. The difference in mechanical energy input as fossil fuel accounted for about 54 l/ha.

Wheat is the most important cereal crop in the Sudan after sorghum. It provides a large component of the diet. In the past, wheat demand was limited and only mostly in northern Sudan and largely met by domestic production in that traditional consumption area. Recently, the demand has increased over time in urban and extended to rural areas induced by substantial shift in consumption habits away from the traditionally used sorghum. Due to this average, consumption per capita rose from 10.5 kg in 1960 to about 33 kg in 1993 and to about 44 kg in 2006 (Faki, 1996). As a result, substantial imports are made every year to meet the deficits, as the local production could no longer satisfy the increased consumption, that is, the high cost of wheat production compared  to  winter food legumes crops and other cash crops, which is the main constrain of it as horizontal expansion.

Energy is essential in agriculture as much as in all other productive activities. One way of intensifying food production output is horizontal expansion on cultivated land, implying additional land preparation operations. In order to support these operations, tools and equipment are used, which require energy. Energy is a scarce resource in some agricultural operations in some developing countries in Africa. Agriculture is user and producer of energy; currently, the concept of productivity and profitability of agriculture depends on energy consumption (Chamsing et al., 2006).  Therefore, energy use  for  agricultural  production  is  under  research, such that analysis of energy use efficiency at different levels will reduce energy input, labor and time. At the farm level, energy use is classified as either direct or indirect, and energy inputs analysis differs to a large extent for a specific period, different crops and production system, such as energy consumption study for farm operations for some crops (Chamsing et al., 2006; Verma et al., 2017), determine energy consumption for some crops according to the farming power source (Karale et al., 2008), or determine energy use during specific period (Gholami and Sharafi, 2009), or aassessment of direct on-farm energy use for grain crops under different farming practices (Tek et al., 2015), or analysis of energy under different climate and soil-based irrigation (Rubina et al., 2017) to evaluate energy input to product output.

The quantity of energy gathered under the form of biomass is a successful measure in agriculture because of efficient human and fossil energy use (Jones, 1989; Glendining et al., 2009; Akdemir et al., 2012). To measure requirement of energy for productivity, the calorie offering a single unit, is suitable for field crops, which is equally useful from the time when the plant captures light energy until it is incorporated into consumer products (Janick, 2002).

A rational use of energy in productive activities is then necessary for economic and environmental reasons. Therefore, it is a time to apply energy analysis in agriculture in Sudan like in other sectors of the economy. FAO (2010)’s study on energy and agriculture in Africa, from preliminary results using Sudan as a case study, indicated there is continuous and rapid expansion of cultivated area, but yields continue to deteriorate. This means there is more increase in energy use than agricultural production.

In the River Nile State, irrigated agriculture extends along the River Nile banks. The farm size holding ranges between 0.5 and 2 ha. Human and fossil fuel energy is predominantly used in most farm operations, where electricity and diesel engines are used for pumping irrigation water from the Nile. Wheat is one of the main important food crops in winter season, with less competition compared to legumes crops. Therefore, a key to the rational use of energy in wheat production in the state is to apply the zero or minimum tillage practices, to enhance the competitive power of wheat as the main crop for food security. Thus, assessing of energy consumption for wheat production under different tillage systems is required to understand the situation of energy use efficiency and the sustainability of wheat production.

For the computation and analysis, energy resources were classified into physical (human and mechanical), chemical and biological inputs for the different farm operations of wheat produced under conventional tillage and zero-till system. In this study, all human energy inputs were considered: for physical energy, the mechanical power considered is only fuel input; chemical energy is fertilizer and herbicides; and biological energy is seeds. If there are no data and energy input does not make any difference in the results (pumping irrigation water), exclusion is used for some inputs (ISO 14040, 2006).

Field survey and personal interview of operators and labors carrying out land preparation operations: sowing, fertilizer application, herbicides spraying of herbicides for broad and narrow leaf weeds and two-stage harvesting of wheat with their related factors were collected and specified in details (Table 1). 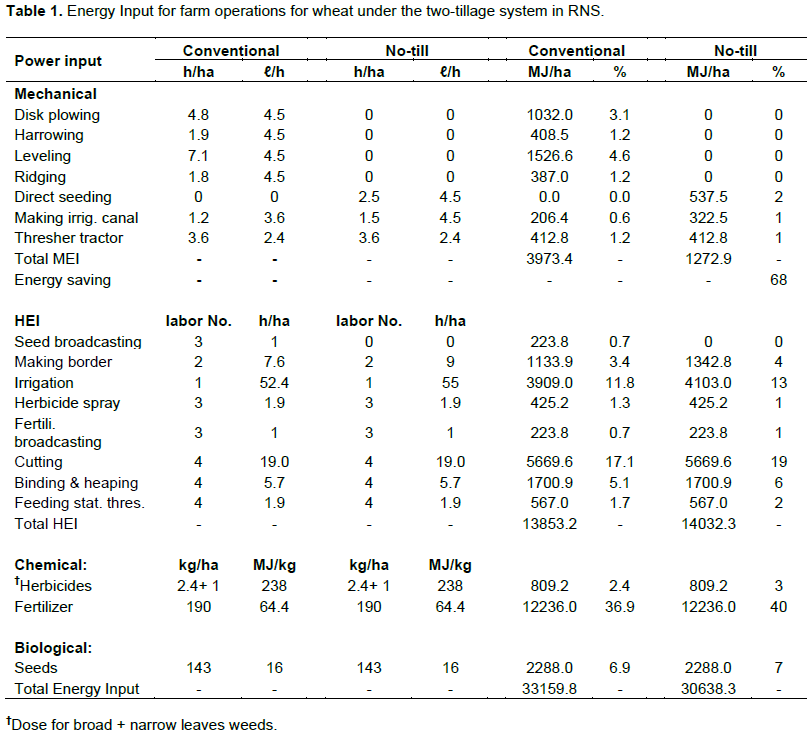 For Human Energy Input (HEI), The following equation was applied considering that human muscle power equivalent of 74.6 W was appropriate (Singh and Singh, 1992).

For Mechanical Energy Input (MEI), considering 47.78 MJ/l as energy equivalent value for diesel fuel (Cervinka, 1980) and then the following equation was applied:

For the energy input for seed, we consider 1 MJ/kg more than wheat energy output value, that wheat has 14.7 MJ/kg energy output (Singh and Mittal, 1992, Kuesters and Lammel, 1999; Gholami and Sharafi, 2009), and consider energy input of 238 and 64.4 MJ/kg for herbicides and fertilizer, respectively (Rubina et al., 2017). The total energy input (TEI) is calculated as:

To evaluate the two systems on energy use pattern from the data collected and the obtained results, the energy ratio, energy productivity, specific energy and net energy were calculated and the following equations were: 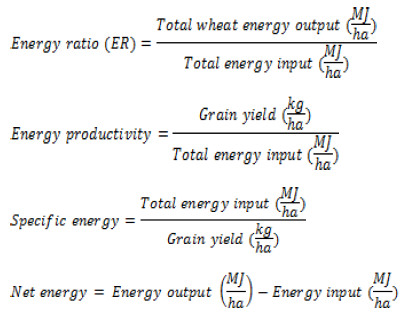 About the other energy pattern (Table 3), the specific energy for the two systems was the same and zero-till saves about 8.3% more than net energy of conventional system. In case of energy ratio (energy produced from one MJ consumed), zero-till has marginal value over the conventional tillage from season 2011/2012, with the same nearly average yield produced, where any value less than one, means more energy consumes than output energy, which is the stage of none sustainability (Figure 1). It appears from these energy patterns, that wheat production consumes more energy under conventional tillage and the amount that resulted from land preparation operations. 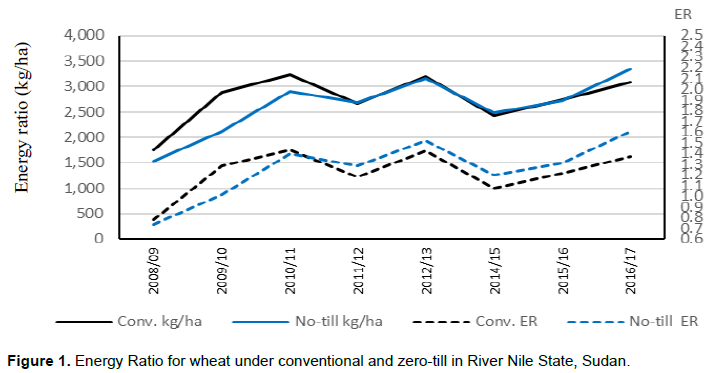 The zero-tillage is saved in the land preparations besides that it is eco-friendly by reducing gasses emission from such operations, as wheat sowing is done on the land of preceding   crop   without   any   ploughing.    From   such studies, it appears that new technologies have a role on energy saving as agriculture is user and producer of energy. Thus, conventional tillage is the  most  expensive and is significantly great in energy and labor consumer. Therefore, there is a need to adopt new energy efficient practices to establish sustainable production systems, especially in developing countries for security of food crops.