Evaluation of different carbon and nitrogen sources for better growth and sporulation of T. harzianum (Th14)

An investigation was undertaken to evaluate the effectiveness of carbon and nitrogen sources on mycelial growth and sporulation of Trichoderma harzianum (Th14). Among the tested different carbon sources viz., jaggery, honey, sugar, dextrose and peptone, significantly maximum biomass and sporulation was observed in honey (1190 mg; 7.06×108) followed by dextrose (1037 mg; 5.27×108) and jaggery (992 mg; 5.50×108) whereas among  tested nitrogen sources viz., ammonium sulphate, sodium nitrate, potassium nitrate, urea, ammonium nitrate and calcium nitrate, significant maximum biomass was observed in ammonium sulphate (1035 mg) followed by sodium nitrate (965 mg), and ammonium nitrate (955 mg). However, in sporulation these nitrogen sources were at par with each other. The present result would be helpful in enhancing the conidia and biomass production of local strain and great importance when considering the production of T. harzianum for use as a biocontrol agent.

Pathogens cause world-wide economically significant diseases in numerous agricultural, horticultural and ornamental crops. Most of the pathogens are difficult to control by conventional fungicides. Biocontrol represents an economical, environmentally friendly alternative to chemical pesticides for diseases produced by phytopathogens. Trichoderma strains have received particular attention as bio control agent of fungal plant pathogens. The effort for isolating and developing the indigenous bio control agents against various soil-borne plant pathogenic fungi  continually  conducted  in  several countries for alternative in reducing application of chemical pesticide (Said, 2007). There are some advantageous to apply indigenous bio control agents for solving local plant disease problems, such as naturally, they are available in the local plant rhizospheres, there is no obstacle for climate change and it gives opportunity for domestic income. In order to commercialize these bio control agents for biofungicide, suitable cultural methods and fermentation production systems should be developed, and also the optimal conditions for spore production should be determined.
Several authors (Lewis and Papavizas, 1983, 1991; Harman et al., 1991; Agosin et al., 1997, Mehta et al., 2012 and Rajput et al., 2014, Rajput and Shahzad, 2015) have studied the effects of environmental factors such as carbon and nitrogen sources, carbon to nitrogen ratio (C/N ratio), pH, and temperature on spore production and spore viability of some strains of T. harzianum. But for new or local strains, such effects should be studied again, because each strain has its own characteristic responses for these factors, besides that, insufficient information is available on the influence of nutritional and culture conditions on the quantity of spore produced and spore viability for industrial purposes.
In general, commercial preparations of Trichoderma sp. for biological control consist of bulk produced conidia, which are the asexual reproductive units of this fungus. Bulk production of conidia typically relies on manipulation of nutrients to promote conidiation, of many species of Trichoderma. Carbon and nitrogen sources are important parameter affecting growth and sporulation of Trichoderma. About half of the dry weight of the fungus cells consists of carbon, which gives an indication of the important role of carbon compounds like growth and development of fungal cell (Moore- Landecker, 1996). Our experiment was focused on the effects of different carbon and nitrogen sources on growth and sporulation of T. harzianum in in-vitro.

An experiment was conducted in the Oilseed Pathology Lab, Department of Plant Pathology, G. B. Pant University of Agriculture and Technology, Pantnagar (Uttarakhand) India to study the effect of different carbon and nitrogen sources on growth and sporulation of T. harzianum (Th 14).
Potato Dextrose Agar (PDA) and Potato Dextrose Broth (PDB) were prepared following the standard procedure (Anonymous, 1968). After preparation of media, pH of the medium was adjusted to 6.00 by adding N/10, HCl/ NaOH using pH meter. Prepared medium was sterilized in an autoclave at 121°C temperature for 20 min.
Microorganism
The Trichoderma harzianum isolate Th14 obtained from culture collections of Bio control laboratory, Department of Plant Pathology, GBPUA and T, Pantnagar for the present investigation. Trichoderma harzianum isolate Th14 have strong antagonistic property and could be exploited for biological product. The fungal antagonist was maintained on potato dextrose agar (PDA) slant and stored in refrigerator for further studies.
Effect of carbon sources on growth and sporulation of T. harzianum
Different carbon sources viz., jaggery, honey, sugar, dextrose and peptone at 1.0, 2.0 and 3.0% were added to potato broth (PB) medium without carbon sources the medium was autoclaved. Chloramphenicol at 500 ppm was added  to  sterilized  stock  media just before inoculation to inhibit bacterial growth. The flasks (250 ml capacity) containing 100 ml of each sterilized amended carbon medium were inoculated with 5 mm discs (2 No.) cut from 4 days old actively growing culture of T. harzianum (Th14). There were three replications kept for each treatment. The flasks were incubated at 27±1°C for 12 days.
Effect of nitrogen sources on growth and sporulation of T. harzianum
Different nitrogen sources viz., ammonium sulphate (NH4)2SO4, sodium nitrate (NaNO3), potassium nitrate (KNO3), urea CO (NH2)2, ammonium nitrate (NH4NO3), and calcium nitrate Ca (NO3)2 were used separately at 0.1 and 0.3 per cent to see its effect on in -vitro growth and sporulation of T. harzianum by the methods as described above.
Determination of mycelial biomass and sporulation
After 12 days incubation (DAI) the fungal mycelial mat along with spores in each flask (100 ml broth) of each treatments were separated by Whatman paper No.1. The fungal bio biomass on the filter paper was dried at room temperature for 48 h. Then the fungal dry weight (mg/100 ml) was measured with electronic balance. The collected mycelial mat of each flask was air dried and makes it in fine powder. The prepared powder was properly mixed in their respective flask. One ml of this suspension, well shaken, was added to 9 ml of sterilized distilled water to make 10-1 dilution. The procedure was repeated till the desired dilutions were obtained. The spore concentration was measured by using haemocytometer.
Statistical design
The experiment was conducted with completely randomized design (CRD) and the experimental data were statistical analyzed using STPR1. Data were subjected to analysis of variance and treatment means were compared by an appropriate Duncan’s multiple range test (P < 0.05) under SPSS 16. 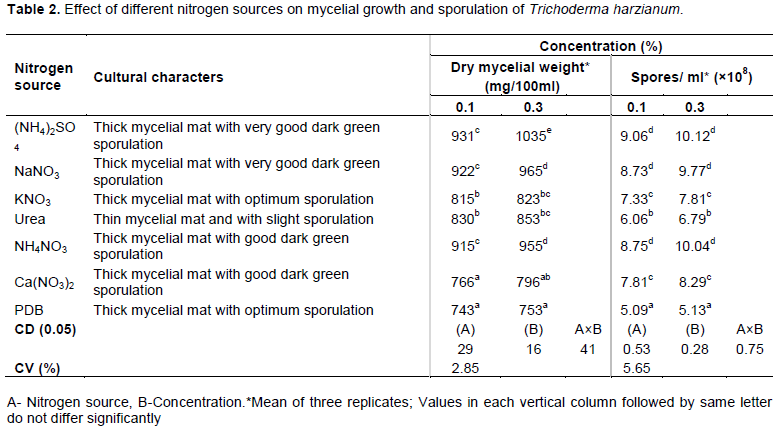 In conclusion, this study showed that Trichoderma harzianum (Th14) has the ability to use a variety of a carbon and nitrogen sources for good biomass and spore production at different levels. The biomass and sporulation was best with honey as carbon source and ammonium sulphate as nitrogen source and this is of great importance when considering the production of T. harzianum for use as a bio control agent.

The paper forms part of a PhD work of the first author and the facilities provided by G. B. Pant University of Agriculture and Technology, Pantnagar – 263 145 (Uttarakhand) India for the conduct of this study are sincerely acknowledged.