Silkworm diseases form major constraint in realizing full potential of the silkworm hybrids. Among all the silkworm diseases that cause damage, viral diseases are most serious (Samson, 1990; Subba, 1991; Sivaprakasam and Rabindra, 1995). Nuclear polyhedrosis (BmNPV) belongs to Baculoviridae, causes nuclear polyhedrosis (grasserie) in silkworms which is the most common viral disease and is prevalent in almost all the sericulture areas in India.
Grasserie disease accounts for about 50% of total crop loss due to viral diseases (Samson, 1992). Under the above circumstances, among many measures of silkworm disease control and prevention, the utilization of disease resistant/tolerant silkworm breed/hybrid together with disinfection would be the most effective step in the direction of the disease prevention (Sivaprasad and Chandras hekharaiah, 2003). Breeding as an important tool has been used by many breeders for exploiting the inherent heterosis.
The aim of the most breeding programmes is to improve the yield potential of the breeds/hybrids over the existing one which has played a vital role in increasing the productivity in sericulture (Reddy and Sinha, 2009; Reddy et al., 2009a, b; Reddy and Prasad, 2010; Seshagiri et al., 2009). Silkworm hybrids show improved reeling performances over pure races (Reddy and Sinha, 2009, 2010). The silkworm, Bombyx mori L. forms one of the very important insects of choice with large number of strains which is best exemplified for utilization of heterosis by crossing them in different combinations (Datta and Nagaraju, 1987). Among various reasons for low productivity of Ethiopian silk worms, is the lack of highly productive silkworm and diseases resistant races suitable to environmental conditions. In addition, Ethiopian sericulture is mostly polyvoltine and some bivoltine oriented and the qualities of the breeds have deteriorated as a result of continuous and prolonged inbreeding. Thus, breeding emphasizes the need for developing promising genotype of known genetic potential to increase productivity in plants and animals (Yokoyama, 1956).
Melkassa Agricultural Research Center started sericulture activity since 1990 on Eri (eri-3.4 and India) and Mulberry silkworms (multivotine and bivoltine). For the last 14 to 15 years, silkworms have been maintained in the center through self-crossing methods. As a result, disease tolerant capability is deteriorating from time to time for some races of Eri and mulberry silkworms due to losses of resistant genetic potential, while the others are relatively resistant to disease and high yield. Inter-strain/breed differences in susceptibility or relative tolerance to a number of silkworm diseases have been reported (Sivaprasad and Chandrashekharaiah, 2003). However, no report is available on development of multivoltine x bivoltine silkworm hybrids tolerant to diseases, especially under Ethiopian tropical conditions. Thus, in the present study, an attempt was made to develop relatively higher disease tolerant and yielder cross breed of silkworm for commercial as well as farmer's exploitation.
Objectives
1. To develop relatively disease resistant hybrids of mulberry silkworm, B. mori
2. To develop high yielding hybrids of mulberry silkworm, B. mori.

The trial was conducted at Melkassa Agricultural Research Center, in the sericulture research laboratory. By employing multivoltine x bivoltine, mulbery feeding silkworms crossed and a total of four hybrids and five parents were used in the experiment (Mulberry multivoltine (mmyc) x Mulberry bivoltine (Kenya4), Mulberry multivoltine (mmyc) x Mulberry bivoltine (China2), Mulberry multivoltine (mmyc) x Mulberry bivoltine (Kenya5), Mulberry multivoltine (mmyc) x Mulberry bivoltine (Korea1), Mulberry multivoltine yellow coccon, Mulberry bivoltine Kenya4, Mulbery Biviltine Kenya5, Mulbery Biviltine Korea1, MulberyBiviltine China2). To conduct the trial, alcohol, table knife, Mulberry silkworm, thermo-hygro-meter, mountage, humidifier, sensitive balance, leaf chopper, leaf storage box, feeding tray, shelfing box, plastic sheet, razorblades and disinfectant chemicals were prepared. Parent bivoltines and their hybrids were treated with HCl chemicals to break the diapousing mechanisms. The existing mulberry multivoltine (yellow coccon), Kenya and Korea bivoltine silkworms were used for this study because the races are having different characteristic features. Mulberry multivoltine (yellow coccon color) has relatively disease resistant ability than bivoltine but the coccon size is very small. Mulberry feeding Kenyan and Korean bivoltine have big cocoon size, however, diseases tolerant capability were very low.
Therefore, higher disease tolerant ability and yellow coccon color, and lower disease tolerant ability and big coccon sizes are significant characteristic features of mulberry multivoltine and bivoltine silkworms, respectively, used for experimentation. Prior to implementation of the hybridization, isolated room was prepared for hybridization of the silkworm races to avoid contact with other species. In the isolated room, different boxes of the same sizes, which are having sufficient air circulation system, were prepared for mating of the adult races and growing of larvae is until mounting. An equal age and sexually matured mulberry multivoltine yellow as Female (PA1) and mulberry feeding Korea, China and Kenyans (K4 and K5) bivoltines as a male (PB1, PB2 and PB3) were used for the first phase combination/hybridization (PA1 x PB1= F1-1, PA1 x PB2=F1-2, PA1 x PB3=F1-3 and PA1 x PB4=F1-4 hybrid). For each parent A and B, 10 females and male were taken and mating was performed in the mating boxes.
Four hybrids were produced (F1-1, F1-2, F1-3, and F1-4) and mating was performed in the mating boxes and stayed for about 5 to 6 h in the mating room. After 5 to 6 h of mating, male parents were discarded and female was put in the egg laying boxes. Egg laying required 18 to 24 h depending on environmental conditions of the experimental room. After 18 to 24 h of egg laying, an eggs was put in the egg hatching boxes. Hatching of an egg was performed from 10th to 14th day’s oviposition. When an egg was hatched (90% and above), 200 newly arrived, young larvae's were transferred to feeding boxes. In each instar larval duration in the feeding boxes, carful observation and recording of all the necessary data were performed on the hybrids as well as parents, up to the seventh generations. The experiment was repeated for four times and the genetic expression of the hybrids on different economic traits [pupation rate (%), number of diseased larvae, fecundity, survival rate (%), cocoon weight (g), cocoon shell weight (g), cocoon shell ratio (%) and filament length (m)] were recorded and compared with original parents.

Silkworm breeding is the most important example where heterosis is being exploited commercially to the maximum extent. To achieve desired goals, cross breeding is widely used in commercial animal production as a means of exploiting heterosis (Sang, 1956; Significant differences were observed for all economic parameters among different hybrids of polyvoltinex bivoltine crossing as well as parents. Hatchability with chemical significantly increased hybrids and mulberry mutivotine followed by parent's bivoltines. After the eggs are laid, if they are subjected to an artificial treatment at appropriate embryonic developmental stage, it is possible to stimulate further growth of the embryo. But hatchability without chemical was nil for all bivoltine parents; however, significantly higher for multi voltine and hybrids (Tables 1 to 4). This is because once the embryo enters diapause, it hibernates through a specific period of time and when it experiences favourable temperature, it resumes its growth and then hatches (Roy, 1997). Roy (1997) and Wang et al. (2015) also explained that, in order to get maximum yield of silk from the silkworms, appropriate environmental conditions are required for both multivoltine and bivoltine silkworms. 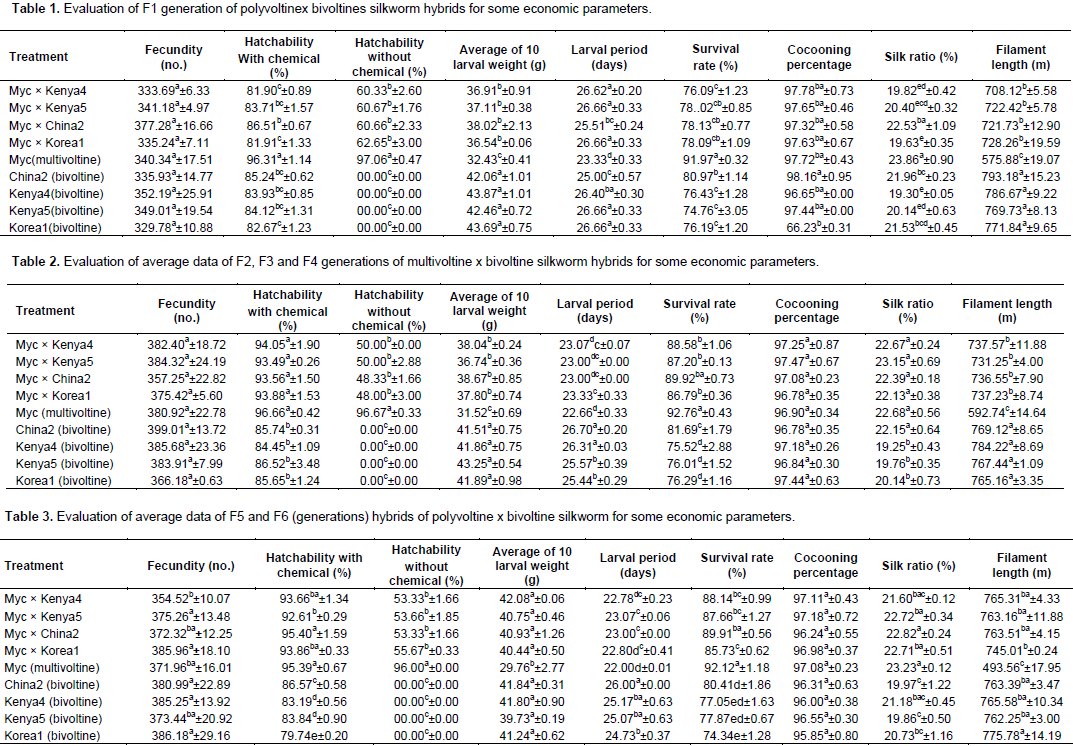 Multivoltine x bivoltine mulberry silkworms crossing was performed and evaluated up to seventh generation (F7) by using some economic parameters. Hybrids of multivoltine × bivoltines silkworms are better than individual parents in terms of relative disease resistant and quality of silk produced. Significantly (P<0.01) higher survival rates and silk ratios were observed at generation five (F5) and above as compared to the other generations for maximum silk production. Therefore, it can be concluded that, for the maximum and sustainable silk production from silkworms, F5 generation hybrids of multivoltine x bivoltines silkworms are better than individual parents for the end users.