As a relatively novel testing algorithm, the experience with 4th generation HIV testing and linkage to care outcomes is limited. The purpose of this study is to report descriptive outcomes regarding patients with acute HIV infection who received antigen/antibody (Ag/Ab) reactive results and linkage to care services. HIV testing and linkage data from four AIDS Healthcare Foundation (AHF) Wellness Centers in Los Angeles County, CA were retrospectively reviewed from January 15, 2016 to May 26, 2018. Patients were screened using the INSTI® HIV-1/HIV-2 Rapid Antibody Test (bioLytical, Richmond, BC). A negative result reflexed to an HIV test on the Abbott Architect Ag/Ab Assay (Abbott Laboratories, Lake Bluff, IL). Out of the total 11,173 patient specimens processed on the Architect platform, 56 received preliminary reactive results and 42 returned for confirmatory viral load testing. Twenty-seven (64%) of the 42 patients were confirmed to be acutely infected with HIV. All 27 patients acutely infected with HIV were linked into care: 22 were linked into AHF’s primary care and the remaining five sought care with a primary care provider external to AHF. Despite low positivity, the 27 acutely HIV-infected patients would have otherwise been missed if the patients had only received the standard-of-care rapid antibody test. Curbing HIV incidence in the United States will require multiple innovative approaches. Detecting acute infections through 4th generation testing is one of the many valuable tools that organizations can utilize in the new decade.

In the  late  1990s,  laboratory  instrument  manufacturers pursued automation  of  an HIV  immunoassay  that could couple detection of HIV antigens and antibodies (Ag/Ab) to reduce the window period between HIV infection and detection. In 2010, the laboratory procedure performed on the Abbott Architect platform (Abbott Laboratories, Lake Bluff, IL) was the first 4th generation test cleared by the Food and Drug Administration to aid in the diagnosis of acute HIV infection. 4th generation HIV testing was adopted into the Centers for Disease Control and Prevention HIV infection diagnoses recommendations as part of a novel algorithm in 2014 (Centers for Disease Control and Prevention, 2014). Since then, public health laboratories have made great strides in adopting the new guidelines. According to the Association of Public Health Laboratories HIV Diagnostics Survey, 94% of responding laboratories used an Ag/Ab immunoassay in 2017, a significant increase from 55% in 2014 (The Association of Public Health Laboratories, 2014, 2017).

Diagnosis of acute HIV infection is difficult based on symptoms alone. Early detection may benefit patients as antiretroviral therapy could be introduced during acute infection, which leads to lower viral load set point as well as suppressing viral load when a patient is at an increased risk of further transmission (O’Brien and Markowitz, 2012; Zulfiqar et al., 2017). This is a crucial opportunity for medical treatment and public health intervention. During incubation period, traditional HIV antibody tests are inadequate to detect infection (Chavez et al., 2011). HIV Ag/Ab assays can detect acute infections and reduce the window period by 3-19 days compared to antibody assays alone (Brennan et al., 2013). The ability of HIV Ag/Ab assays to detect infections during the incubation period is an advantage over commonly used point-of-care rapid HIV antibody screening tests (Gray et al., 2018; Han et al., 2019).

Beginning in 2016, AIDS Healthcare Foundation (AHF) began offering HIV Ag/Ab testing for patients seeking free, walk-in HIV testing services at its four Wellness Centers in Los Angeles County, CA. As a costly testing algorithm, the scientific experience surrounding HIV Ag/Ab testing and linkage to care outcomes among high-risk patients is limited. While a majority of laboratories have adopted Ag/Ab immunoassays, community health clinics and public health departments still rely on rapid antibody testing alone. The purpose of this study is to report descriptive outcomes regarding 4th generation testing in AHF’s Wellness Centers that track patients from Ag/Ab reactive results to linkage into HIV care. The research question for this study is, what are the diagnosis and linkage to care outcomes of patients using this novel HIV testing algorithm?

Patient HIV testing data from the four AHF Wellness Centers were retrospectively reviewed for January 15, 2016 to  May  26, 2018. An observational cohort study design was used to describe HIV-diagnosis and linkage to care outcomes of the patient population were measured over time. As defined under regulation number 45 CFR 46, secondary research of identifiable private information when regulated under HIPAA for the purposes of research does not require ethical approval and using identifiable biospecimens for research which only involves collection and analysis does not require consent; therefore, ethical review was waived.

Patients were first screened by HIV testing counselors using the INSTI® HIV-1/HIV-2 Rapid Antibody Test (bioLytical, Richmond, BC). A negative result on the rapid antibody test would reflex to an HIV Ag/Ab test on the Architect platform. A rapid antibody test can only detect HIV infection after the incubation period, once the body starts producing antibodies; whereas the HIV Ag/Ab assay detects the p24 antigen during the incubation period, increasing the likelihood of detecting HIV at an earlier stage. Patients would receive a venipuncture blood draw in a vacutainer tube by a medical assistant. The tubes would then be delivered by the organization’s courier staff to the laboratory technician operating the Architect platform in AHF’s moderately complex laboratory. Specimens that were screened as reactive on the Architect platform were ran two more times. Lastly, patients with at least two out of three reactive results were contacted by Community-Embedded Disease Intervention Specialists (CEDIS) to return to the patient’s initial Wellness Center for viral load confirmatory testing. Patients with a confirmed viral load were then linked into HIV care.

During the study time frame, AHF processed a total of 11,173 patient specimens on the Architect platform. Total population sampling was used where all patients that got tested were included in this study. The laboratory technician logged the reactive results on AHF’s electronic health records system and a secure spreadsheet. Patient-level demographics and risk behavior variables were added to the spreadsheet. All data collection and analyses were performed internally by AHF staff using SAS 9.4 (Cary, NC).

Out of the total 11,173 patient specimens processed on the Architect platform during the study time frame, 56 patients received preliminary reactive results. Among the patients with reactive results, 42 (75%) returned to a Wellness Center for confirmatory testing. Twenty-seven (64%) of the 42 patients were confirmed to be acutely infected with HIV. The true positivity was 0.24% (27 confirmed acute HIV infections out of 11,173 total tests). All 27 patients acutely infected with HIV were linked into care: 22 were linked into AHF’s primary care and the remaining five sought care with a primary care provider external to AHF. Tables 1 and 2, as well as the following summary, are based on the 27 patients confirmed to have acute HIV infection. 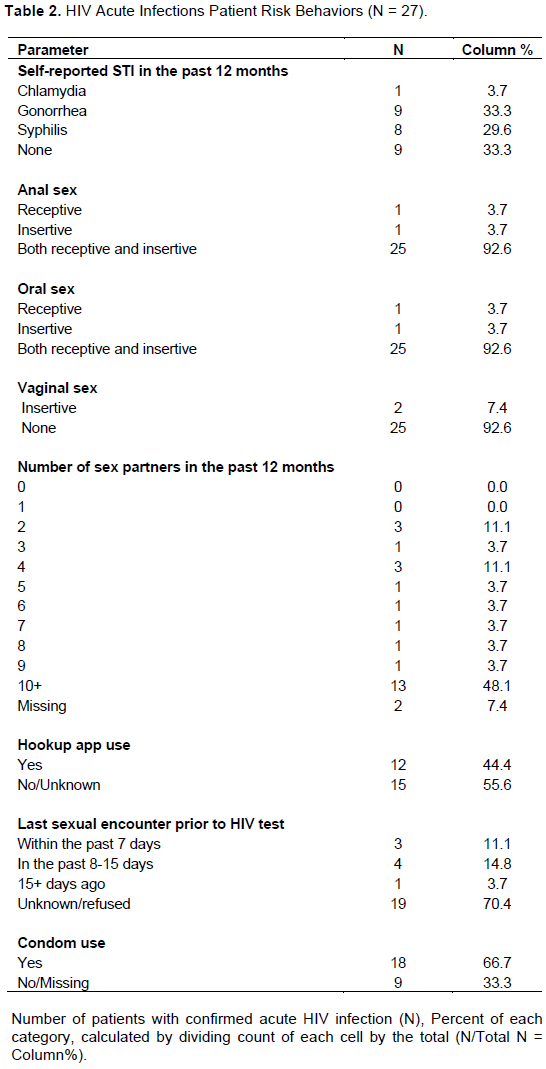 Fourth generation HIV Ag/Ab testing at AHF Wellness Centers helped link 27 patients acutely infected with HIV, thus answering the research question of this study. The overall acute HIV positivity rate was low (0.24%) because every Wellness Center patient is first screened using a rapid antibody test. Thus, the Architect platform detects a short window period between the earliest possible detection of acute infection and the earliest possible detection by a rapid antibody test. Despite the low positivity, the 27 acute HIV-infected patients would have otherwise been missed if the patients had only received the standard-of-care rapid antibody test. It is important to also note that 15 of the 42 patients received a reactive result on the Architect platform but were ultimately confirmed to be HIV negative via confirmatory viral load test. This 36% false positivity is slightly below the frequencies that have been documented in previous studies that evaluated repeatedly reactive HIV results on the Architect platform in similar conditions (Chavez et al., 2011; Mershon et al., 2017). This study has several limitations. First, the sample size of 27 patients with confirmed acute HIV infection is admittedly small, particularly as 14 patients did not receive confirmatory testing and were considered lost to follow-up. Second, due to the lack of risk factors of the total population tested, relationships between risk factors and acute HIV infection could not be analyzed. Third, with limited data before AHF implemented this novel testing algorithm, analysis to compare outcomes pre- and post-algorithm was not available to determine whether an increase in HIV diagnosis rates occurred. Curbing HIV incidence during COVID-19 is crucial now more than ever due to reduced capacity of HIV testing and specimen processing in laboratories. It is further impacted by fear of being exposed to COVID-19, stay at home orders, and suspension of supportive services (Qiao et al., 2021). Focusing on the HIV epidemic will help us reach the “Ending the HIV Epidemic: A Plan for America” goal by reducing 90% of new infections in the next 10 years (US Department of Health and Human Services, 2020). Currently, there is a lack of knowledge on individuals acutely infected with HIV and their risk behaviors-including geosocial networking applications (colloquially known as “hookup apps”). The association of hookup app use and condom-less, anonymous sex has been documented, providing an opportunity for novel interventions like pre-exposure prophylaxis to prevent acute HIV infection (Choi et al., 2016; Xu et al., 2018).

The population of AHF patients who sought HIV testing at AHF Wellness Centers in Los Angeles County demonstrates real-world outcomes among high-risk individuals following 4th generation testing. Although 4th generation testing has increased in recent years, its implementation can be costly and cumbersome. At a time where decreased federal funding has led to clinic closures (Leichliter, 2017), public health organizations may not have the means to extend beyond standard-of-care rapid HIV testing. However, curbing HIV incidence in the United States is still a priority and will require multiple innovative approaches. The COVID-19 pandemic has also negatively impacted HIV testing and other care continuum services exposing medical and structural vulnerabilities, thus undermining system-level HIV prevention (Pinto and Park, 2020). Detecting acute infections through 4th generation testing is one of the many valuable tools that organizations can utilize in this new decade especially during such unprecedented times.

The authors appreciate the staff of the AHF Wellness Centers. This manuscript would not be possible without their work to provide free cutting-edge HIV testing to the public and also thank Rosalba Castro, the laboratory technician at AHF’s Western Public Health Laboratory for her tireless efforts.