The role of IgG, IgA and IgM as immunological markers of HIV/AIDS progression

Patients with human immunodeficiency virus (HIV) infection exhibit a generalized, non-HIV-specific polyclonal B-cell activation resulting in hypergammaglobulinemia of all immunoglobulin isotypes as well as increased production of HIV-specific IgG and IgM. These immunoglobulins have the potential to be used as markers for monitoring the progression of HIV infection. With the inherent challenges of cost and convenience in the use of the conventional markers for HIV monitoring, that is, viral load and CD4+ count, there is the need to investigate the possible prognostic role of the above mentioned immunoglobulins in the management of HIV patients in Nigeria. The IgG, IgA and IgM profile as well as the CD4+ T cell count of forty HIV seropositive subjects was assayed before and after 3 months follow-up in a case series descriptive study. The Igs were measured using enzyme linked immunosorbent assay (ELISA), while CD4 count was done using flow cytometry. In the determination of concentration/value changes of parameters at baseline and follow up in HIV progression, only IgM, waist and hip circumference showed significant differences (p < 0.05) within the period under study. While in the determination of the effect of therapy on the subjects, significant differences (p < 0.05) were observed only in the values of CD4 count and BMI. While statistically significantly inverse relationship was observed between the CD4 counts and IgM concentrations, the values of IgG and IgA were inverse but not significant in relation to CD4 count. This study concluded that immunoglobulins (G, A and M) are not reliable in monitoring short term response to therapy unlike CD4 count although IgM has good diagnostic value like CD4 at baseline.

Ethical approval
Ethical approval was obtained for this study from the appropriate authority (Ministry of Health of Oyo State).
Data collection
Anonymized questionnaire was used to collect the socio-demographic characteristics and other relevant information of subjects who were enrolled and followed-up for the study.
Sample collection
A hundred (100) HIV positive baseline blood samples were collected by venepuncture from HIV positive subjects who were yet to be placed on anti-retroviral therapy (ART) and who were attending the PEPFAR clinic at Adeoyo Maternity Teaching Hospital, Ibadan. From these 100 initial samples however, only forty subjects were available for the follow-up phase of data and sample collection which was at least 3 months from the period of first contact. Meanwhile, 48 pre-samples and 40 post-samples were analysed in consonance with the calculated sample size and due to attrition respectively.
3  ml  of  blood  sample  were  collected  from  the   HIV   positive subjects using potassium (K3) EDTA vacutainers before and after the commencements of therapy. The suspended plasma was separated and stored frozen with plain bottles at a temperature of -20°C till analysis. 5 ml of blood sample was obtained from 5 apparently healthy, HIV sero-negative individuals and were used as quality control for the study. These control plasma samples were pooled before assaying for their concentration. The control samples were processed and stored in the same way as the HIV positive plasma samples.
CD4 count was obtained by a retrospective enquiry through all the subjects’ personal ‘green’ hospital card at the point of interview. The technique used for the determination of subjects’ CD4+ T cell count at the centre was flow cytometry (PartecCyFlow Counter®, Partec GmbH, Münster· Germany). Immunoglobulins G, A and M concentration were measured using enzyme linked immunosorbent assay (ELISA) kit.
HIV staging
Exposure category (staging) was determined using the World Health Organisation (WHO, 2007) staging criteria.
Statistical analysis
The statistical software - Statistical Package for Social Sciences (SPSS Inc., Chicago - version 16.0), was used in the analysis and inference of data collected. Results were expressed as mean ± SD or as median ± (interquartile range), where SD was ambiguous; and values were considered statistically significant at pË‚0.05. Correlation between the immunological markers under study, that is, IgG, IgA, IgM and CD4+ T-lymphocyte count was assessed by using Spearman’s rank correlation coefficient, while statistical significant changes in concentrations at baseline and 3 months follow-up were determined using the Student paired t-test. Changes in concentration of markers/parameters between therapy and non-therapy group were determined using independent sample t-test. Wilcoxon Signed Ranks Test and Mann-Whitney Test were used for the median (interquartile range) t-tests. The Pearson correlation test was used to determine the strength of relationship between CD4 cell count and other immunological markers/parameters. Chi-square test was used to determine the test of association between markers/parameters under study.

From the 48 initial samples, there were 40 (83.3%) female subjects and 8 (16.7%) male subjects. 21 (43.8%) had only primary education, 15 (31.2%) had secondary education; while only 4 (8.3%) had tertiary education. But, 8 (16.7%) had no form of formal education. 27 (56.2%) of the subjects were traders, while 5 (10.4%) had no means of income. 12 (25.2%) were artisans and casual workers of various vocations, while 2 (4.2%) were retired pensioners. And, only 2 (4.2%) were engaged in formal jobs. Of these, 45 (93.8%) were little or no income earners, 2 (4.2%) were middle income earner and just one person (2.1%) earns high enough to take good care of himself.
Out of these 48 subjects, 25 (52.1%) were Christians, 22 (45.8%) were Muslims, while 1 subject (2.1%) practised both  Christianity  and  Islam.  38 (79.2%)  were married, 8 (16.7%) were single, and 2 (4.2%) were divorced. 34 (70.8%) subjects had symptomatic HIV-1 infection spanning from stages II to IV (3 (6.3%) in stage II; 11 (22.9) in stage III and 20 (41.7%)  in stage IV), while 10 (20.8) subjects were still in stage I/asymptomatic infection stage. However, the staging of four (8.3%) subjects could not be ascertained. 23 subjects (57.5%) were already on therapy, while the remaining 17 (42.5%) were yet to be put on therapy. Of the group that commenced treatment, 5 subjects (21.7%) were treated with only anti-retroviral drug (tablets) comprising Tenovirdisoproxil, Fumarate, Lamivudine and Efavirenz at a dosage of 300, 300 and 600 mg, respectively per day, while 18 subjects (78.3%) received 960 mg per day tablets of Septrin (Cotrimoxazole) in addition to the above-mentioned ARV drug. Trimethoprim or Atovaquone was given to those who reacted to Septrin. The paediatrics received lower doses of the ART ad compared to the adults. These also include a fixed dose or triple fixed dose of Zidovudine, Lamivudine and Nevirapinecomprimes at dosage of 60, 30 and 50 or 300, 150 and 200 mg, respectively. The subjects who were put on therapy had been on their respective medications for a period of 2±1 month before the follow-up blood samples were collected.
Among the parameters compared at baseline and follow up, only IgM, waist and hip circumference, weight showed significant differences. There was no significant difference between the baseline and follow up values of CD4, IgG, IgA, BMI, systolic blood pressure, diastolic blood pressure, weight and height of subjects. In the determination of the effect of therapy on the subjects, significant differences (p < 0.05) were observed only in the values of CD4 count and BMI at baseline and follow in the treatment (therapy) group when compared with the non-therapy group (Table 1). Furthermore, within their respective groups in terms of therapy or none, only IgM, weight and BMI showed significant difference (increase, p < 0.05) between baseline and follow up in the group on therapy, while none of the markers observed showed significant changes in the non-therapy group, that is, p>0.05 (Table 2). 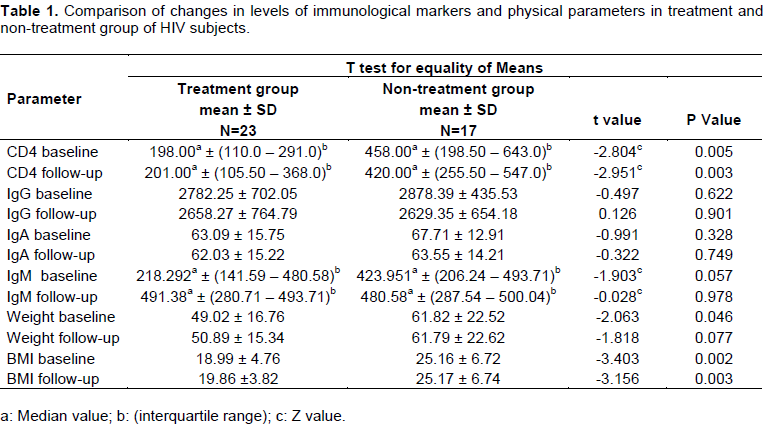 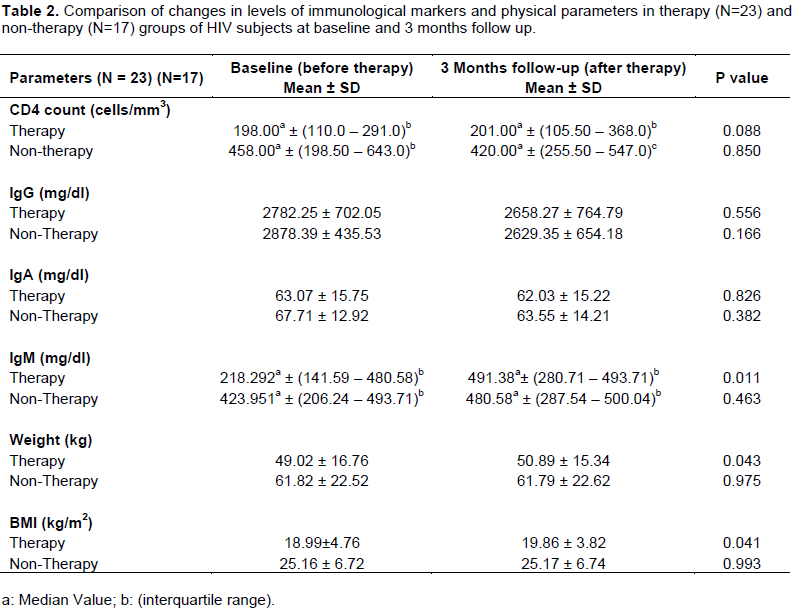 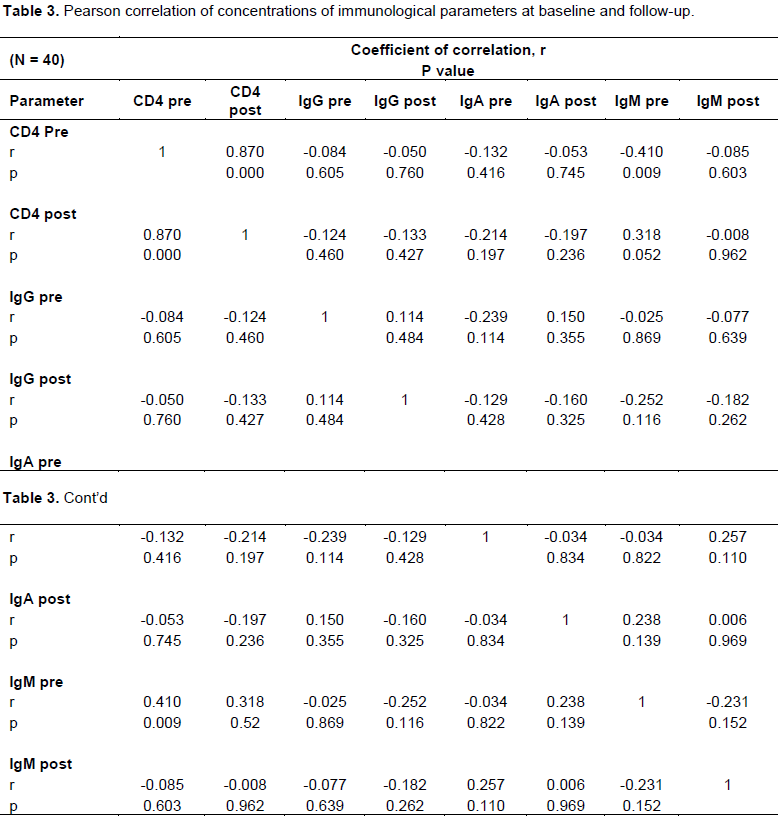 The use of CD4 count, viral load and immunoglobulins, especially IgG, IgA and IgM in the determination and monitoring of the progression of HIV/AIDS have been established (Ghani et al., 2001; Lugada et al., 2004). However, in practice, physicians depend mostly on the estimation of markers such as the CD4 count and viral load level, to monitor and assess whether or not a patient is at risk of progressing to AIDS, monitor therapeutic efficacy and to help determine an appropriate therapeutic regimen (Ghani et al., 2001).
CD4 count estimation has been established in HIV care as a reliable marker of HIV progression (Phillips et al., 1991; Saah et al., 1992; Whittle et al., 1992; Uppal et al., 2003) because HIV infects and depletes vital cells in the human immune system amongst which are the helper T cells (specifically CD4+ T cells), macrophages and dendritic cells (Cunningham et al., 2010). HIV infection leads to a progressive reduction in the number of T cells expressing CD4. So naturally, CD4 count has become a gold standard in monitoring the progression of HIV/AIDS and response to therapy (Mocroft et al., 1997).
HIV neutralizing activities have been attributed to IgG and IgA isotypes, whilst IgG subclasses have been associated with virus-specific antibody-dependent cellular cytotoxicity (Subramannian et al., 2002; Burrer et al., 2001; Moja et al., 2000). Serum immunoglobulins concentrations have been reported to increase with progression from asymptomatic to symptomatic HIV infection (Lyamuya et al., 1994; Peng et al., 1996). However, our findings show no significant difference in IgG and IgA concentrations when comparing the average baseline and follow up samples of all the subjects in both therapy and non-therapy groups as shown in Tables 1, 2 and 3.
Patients with human immunodeficiency virus infection exhibit a generalized, non-HIV-specific polyclonal B-cell activation resulting in hypergammaglobulinemia of all immunoglobulin isotypes’ (Lane et al., 1983; Shirai et al., 1992). However, while this hypergammaglobulinemia is expected uninterrupted in the non-therapy group, the reverse was expected in the treatment group. The result of this study as shown in Tables 1 and 2 that there was a decline in IgG and IgA concentrations between the baseline and follow up values and this seem to be contradictory, because, while such a decline is expected in the therapy group, it was not expected in the group without treatment (Lane et al., 1983; Shirai et al., 1992).
Marcelino et al. (2008) reported an inverse association between anti-Env C2C3 IgG and CD4+ T cells. Since CD4 count increases in the group on therapy, it is expected that the immunoglobulins concentrations decline. However, the pattern observed in the non-therapy group (Tables 1, 2, and 3) where instead of hyperglobulinaemia, a decline is observed; seem to support studies that found a decrease in anti-HIV IgG3 during disease progression (Lugada et al., 2004). And anti-Gag IgG3 appears early in acute infection and then declines (Wilson et al., 2004).
In contrast however, in Table 1, there was significant increase in IgM. In Table 2, amongst the groups on therapy, a significant increase in IgM was also observed. This corroborated the earlier study that chronic state of B-cell hyper activation continues 2 to 3 years after highly active anti-retroviral therapy (HAART) initiation (Lugada et al., 2004). This continuous, chronic immune hyper activation due to HAART must be responsible for the significant increase in the median concentrations of the IgM from the baseline to 3 months follow up in this study. This agrees with Wilson et al. (2004) who reported that there is an increased production of IgM in HIV infections.
Table 3 shows that there is a significant direct relationship between the baseline and 3 months follow up values of CD4 count, establishing the reliability of our test method and it also shows an inverse relationship between the baseline values of CD4 count and IgM concentrations. This agrees with previous studies that show that the primary IgM response does not persist beyond 3 months (Gaines et al., 1988; Lange et al., 1988; Joller-Jemelka et al., 1987). This inverse relationship between the baseline values of CD4 count and IgM concentration suggests that at baseline, IgM concentrations can be used to enhance the prognostic value of CD4 count. However, since there is no significant relationship between the two parameters at 3 months follows up, it will be safe to suggest that at 3 months or beyond, IgM concentration might not be used independently, interchangeably or along with CD4 count in assessing HIV progressions and response to therapy.

This study concluded that IgG and IgA cannot be used as independent, complementary or CD4 associated markers in the monitoring of HIV/AIDS progression or response to therapy and IgM might be useful in enhancing the diagnostic and staging value of CD4 count in HIV/AIDS management; it cannot be safely used in monitoring progression or response to treatments.