Mother-to-child transmission is the highest mode of acquisition of HIV infection in children, with a 15-45% risk of an infant acquiring HIV from an infected mother without any medical intervention. The objectives of this study were to evaluate the implementation of prevention of mother-to-child transmission (PMTCT) guidelines and determine its clinical outcome in a PEPFAR Clinic in Nigeria from 2008 to 2012. A retrospective review of data of patients who accessed PMTCT from the Clinic in the University of Nigeria Teaching Hospital (UNTH), Enugu was conducted. Data were retrieved from the clinic’s database and analyzed. The result showed that three hundred and seventy-three (373) pregnant women (aged 30.22±4.88) and three hundred and sixty-seven (367) children from the pregnancies were enrolled into PMTCT. Ten (10) regimens were used for the mothers: AZT/3TC/NVP, TDF/3TC+NVP and AZT/3TC+EFV accounting for 80.00, 11.00 and 2.65%, respectively. AZT (15.80%) and NVP (84.20%) were used for the infants, 8 (2.18%) of whom tested positive for HIV. The study concluded that PEPFAR Clinic, UNTH Enugu substantially followed the guidelines in its PMTCT programme which was found to drastically reduce the transmission of HIV from mother to child.

Heterosexual relationship is responsible for the highest mode of infection of human immunodeficiency virus (HIV) in Africa (Pokharel et al., 2012). In such a relationship, women are disadvantaged, as the risk of transmitting HIV infection from men to women is higher by almost a 24 fold rate (Pokharel et al., 2012; Arulogun et al., 2007). This makes the infection increase faster in women than men especially in sub-Saharan Africa where women comprise 58% of existing HIV infections (UNAIDS, 2002a). It is estimated that approximately 5,000 women are newly infected with HIV daily out of which more than 3,000 die from acquired immune deficiency syndrome
(AIDS) related illnesses (UNAIDS, 2002b). It therefore means that children are also at risk of acquiring the infection. In fact, out of about half a million children aged under 15 years who are infected with HIV annually, more than 90% got infected as a result of mother-to-child transmission during pregnancy, labour and delivery or breastfeeding (Arulogun et al., 2007). This is because, without intervention, there is a 15-45% risk of an infant acquiring the virus from an infected mother (Pokharel et al., 2012; De Cock et al., 2000; Hussein et al., 2011), making mother-to-child transmission the main mode of acquisition of HIV infection in children under 15 years (Arulogun et al., 2007). The estimate is 15-25% in industrialized nations and 25-45% in developing countries (Karim et al., 2002; Msellati et al., 1992). In some of the developing nations, more than 40% of all live births are HIV infected (Pokharel et al., 2012).
To achieve one of the goals of highly active antiretroviral therapy (HAART) (improving quality of life), the HIV-positive patient is given the opportunity to parent children who would be HIV free. This places a burden on the woman who is required to take some steps to ensure that there is no transmission from her to the foetus in the womb, and to the infant upon delivery, irrespective of the means of breastfeeding. The summary of the efforts is to reduce the viral load of the woman to a minimum possible level, while working for a significant increase in the CD4 count. The main goal of prevention of mother-to-child transmission (PMTCT) is thus minimizing the transmission of HIV by increasing coverage and access to its services (HAPCO, 2003). PMTCT involves a comprehensive four-pronged strategy which WHO stipulates to include HIV prevention, preventing unintended pregnancies in HIV positive women and follow-up treatment and support as well as therapeutic interventions around delivery (Ezegbe and Stephenson, 2012). The Nigerian National PMTCT programme follows these four strategies (Federal Ministry of Health, 2005). PMTCT is included in the services provided by the United States President’s Emergency Plan for AIDS Relief (PEPFAR) for HIV infected individuals. Only the therapeutic intervention aspect of PMTCT was measured in this study because PEPFAR’s main PMTCT service in Nigeria is therapeutic intervention (Ezegbe and Stephenson, 2012).
The first objective of this study was to evaluate the implementation of PMTCT standard guidelines (WHO and Federal Government of Nigeria) in a PEPFAR (APIN-CDC) Clinic in South-eastern Nigeria from 2008 to 2012. The second objective was to determine the clinical outcome of PMTCT in the Clinic.

Study design
This   study   was   a    descriptive    hospital-based study  in  which retrospective data were abstracted from the Clinic’s database.
Study setting
The UNTH PEPFAR (APIN-CDC) Clinic situated at the permanent site of UNTH at Ituku Ozalla, Enugu State, South-eastern Nigeria was the center used for this study. The relevant data of all the patients that met the eligibility criteria of the study were used.
Eligibility criteria
The eligibility criteria for the study were:
1. The pregnant HIV-infected mother placed on ART accessed and completed PMTCT service solely from APIN-CDC Clinic UNTH, Enugu.
2. The infants’ PMTCT service was also solely obtained at APIN-CDC Clinic UNTH, Enugu.
Ethical consideration
Ethical approval was obtained from the Health Research Ethics Committee of the UNTH and the PEPFAR IRB, Harvard School of Public Health. Strict confidentiality was ensured in conducting this study.
Data collection
The File-Maker Professional (FMPro®) Version 10database of the PEPFAR (APIN-CDC) Clinic, UNTH Enugu, was the source of data for this study. Information on patients who received treatment and care for HIV at the Clinic that are available on the database include patients’ demographics, medical history, physical examination including WHO staging, medications, laboratory tests (CD4 count, viral load, complete blood count, liver function test, etc.), adherence information, pharmacy refill records, presence of opportunistic infections, among several others.
The information retrieved from the database for this study were age, marital status, pre-PMTCT status, ART regimen used for PMTCT and adherence level (for the mothers); and ARV used and the result of HIV DNA-PCR and antibody tests (for the child).
Data management and analysis
The abstracted data were first checked for correctness. They were then analyzed with FMPro and IBM SPSS (Version 21). Descriptive statistics and Chi-square test were applied at P<0.05. The results of the study were expressed as frequency (percentage) and mean ± SD which were presented in tables and figures, as applicable. 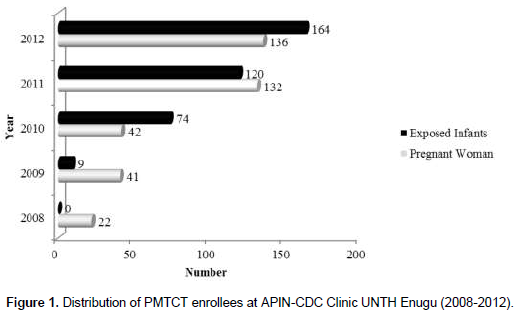 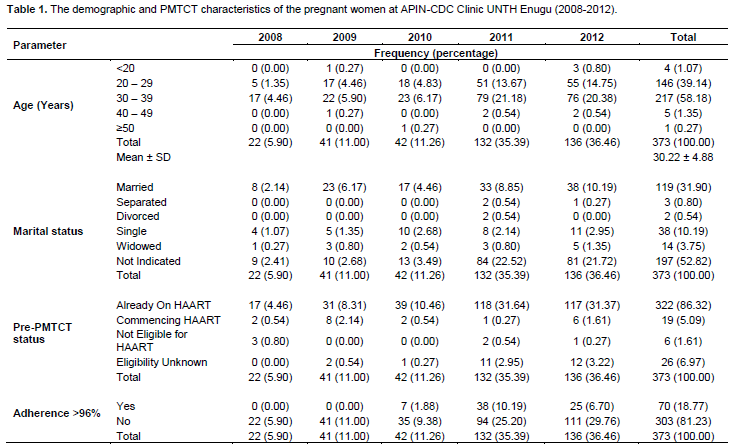 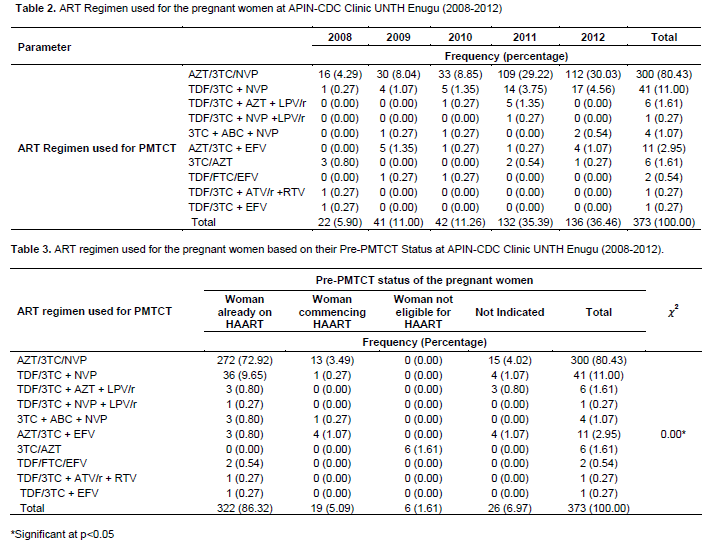 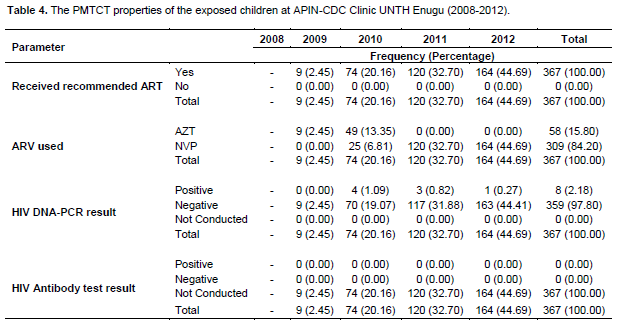 Demographic characteristics of the PMTCT enrollees
The result of the study indicated that enrollment to PMTCT services increased over the years, a result that alluded to strengthened coverage overtime, possibly due to increased knowledge about the service (Hussein et al., 2011). Most of the women were young and married, similar to those of other PMTCT studies (Hussein et al., 2011; Joseph et al., 2011). A small percentage of the pregnant mothers were teenagers, indicating that teenage pregnancy remained an issue as shown in another PMTCT study (Hussein et al., 2011). Most of the enrollees were already on HAART, a predictor of improved obstetric and perinatal outcomes for HIV positive women, as compared to those who took other preventive measures during the pregnancy (Joseph et al., 2011). However, majority of the enrollees had a low adherence rate, a major problem discovered in PMTCT service which another study sought solution for Holstad et al. (2012).
Compliance with guidelines
The pre-PMTCT status of the pregnant women significantly (p<0.05) determined the ART regimens prescribed for them. Most of the regimens used at the clinic were those with proven efficacy and safety in pregnancy according to the two guidelines. All the infants were given recommended and safe ARVs. The prescribed ARVs (NVP or AZT) did not significantly determine the clinical outcome of the service in the infants. The guidelines also stipulate the conduction of HIV DNA-PCR and HIV Antibody tests after birth for all children. The Clinic complied by conducting the HIV DNA-PCR test for all the children, but it did not conduct the HIV Antibody test for any of the children. Cost has been mentioned as an impediment to the simultaneous conduction of the two tests (Markson and Umoh, 2013).
Evaluation of the clinical outcome (HIV status of the children)
The measure of this outcome is the percentage of the children that tested positive to the HIV DNA-PCR and HIV Antibody tests, hence enrolled into HAART after PMTCT.
The result of this study indicated that PMTCT was able to prevent the transmission of HIV from mother to child in 359 (97.80%) of the cases. The percentage of infected infants (2.18%) is less than the 4% transmission rate discovered from a one year study at a secondary healthcare centre in Akwa Ibom State, Nigeria (Markson and Umoh, 2013). It also falls within the international target of lower than 5% reduction of mother-to-child transmission of HIV (UNICEF, 2012). A meta-analysis of the effectiveness of PMTCT in sub-Saharan Africa showed that 7.1% (for a two-drug regimen) and 4.04% (for a three-drug regimen) of the infants tested positive to HIV (Adane, 2012). A study in Kenya even produced 9% HIV-positive infants after 18 months post-delivery (Odhiambo et al., 2013).

APIN-CDC Clinic UNTH Enugu substantially implemented the WHO and FMOH guidelines in its PMTCT services. The result of the clinical outcome evaluation showed that the percentage of transmission of HIV from mother to child among its PMTCT enrollees is below all local and international targets, as well as results from other studies.

APIN (PS 001058) with support from the US Department of Health and Human Services, Health Resources and Services Administration (U51HA02522) and the Centers for Disease Control and Prevention (CDC) provided treatment and care and managed the database for the patients whose data were used for this study. That role forms the crux of this study and is hereby appreciated.