Anti-retro viral therapy (ART) is a lifelong treatment and its effectiveness depends critically both on the efficacy of the antiretroviral drugs against the virus and achieving a very high level of adherence (> 95%) to the medications. This study evaluated the relationship between medication beliefs, locus of control and adherence to ART among people living with HIV/AIDS (PLWHA) in Lagos. A cross-sectional descriptive study was conducted on 302 HIV/AIDS clients receiving Highly Active Anti-Retroviral Therapy in the outpatient ART clinics of the 3 selected public health facilities in Lagos State. Only respondents confirmed and diagnosed to be HIV positive and had met the eligibility criteria for initiating ART, and were 18 years and above on Highly Active Anti-Retroviral Therapy (HAART) for not less than a year. A total of 302 HIV positive persons on HAART completed the study. They were mostly females (n=202; 66.9%) with a mean age of 39 ± 10 years. About a third (30%; n=90) of respondents were adjudged non-adherent. Those who were adjudged adherent were significantly younger than the non-adherents (P=0.001). However, there was no significant difference in the mean score for medication beliefs (Concern or Necessity) and locus of control (Internal, Powerful Others or Chance) between those who were adjudged adherent or non-adherent. There was no direct relationship observed between the locus of control, medication beliefs and adherence to medication among patients on HAART in Lagos, Nigeria. Interventions targeting these socio-cognitive parameters may not yield a further increase in adherence.

The introduction of Highly Active Anti Retroviral Therapy (HAART) has transformed the treatment of HIV infection by improving the clinical course of the disease and substantially reducing HIV/AIDS  associated  morbidity. Early optimism concerning the benefits of these medications has been tempered, however, by evidence that even modest or occasional non-adherence can greatly  diminish  the  benefits of treatment and lead to serious personal and public health consequences. Research has demonstrated that suboptimal adherence (that is, taking less than 90 to 95% of prescribed doses) is associated with increased risk of adverse virologic and clinical outcomes, including increased viral replication and the development of drug-resistant HIV strains as well as a host of clinically significant health-related setbacks (Barclay et al., 2007). Medication non-adherence, however, continues to be a major challenge to and set-back for the success of retro-viral therapy (Chesney, 2000).

Non-adherence, especially in HIV pharmacotherapy, may result in unnecessary health costs, investigations, and changes in treatment, morbidity and mortality (World Health Organization, 2003). Patients’ beliefs about treatment influence treatment engagement and adherence in most clinical treatment settings including during HIV pharmacotherapy (Adefolalu et al., 2014). This is driven mainly by personal beliefs about medications and mediated through the Necessity-Concerns Framework. This framework postulates that medication adherence is influenced by implicit judgments of personal need for the treatment (necessity beliefs) and concerns about the potential adverse consequences of taking it (Horne et al., 2014). The Necessity-Concerns Framework identified individual’s beliefs about their medication as playing a key role in adherence, and UK Clinical Adherence Guidelines recommend eliciting and incorporating individual’s perceptions of their medication within the consultation (Thorneloe et al., 2017).

Very few studies, globally, have examined the relationship between locus of control and treatment adherence among patients living with HIV. Dearth of such data has also been observed in Nigeria. Yet, available evidence suggests that socio-cognitive factors such as medication beliefs and locus of control can influence adherence to medication use (Obadiora, 2016). In the context of HAART therapy, non-adherence has grave implications for personal health and quality of life as well as broader public health. Therefore, this study evaluated the relationship between medication beliefs, locus of control and adherence to ART among people living with HIV/AIDS (PLWHA) in Lagos.

This study was conducted in Lagos State, located in South-Western Nigeria. As at December 2015, there were 40 ART treatment sites in the state (33 Public and 7 Privates) with an estimated number of PLWHIV in the state put at 217,569 by UNAID.

A cross sectional descriptive study was conducted on a sample of 302 HIV/AIDS clients receiving Highly Active Anti-Retroviral Therapy in the outpatient ART clinics of the 3 selected public-health facilities in the state. Only respondents confirmed and diagnosed to be HIV positive and had met the eligibility criteria for initiating ART, and were 18 years and above on HAART for not less than a year by December 2014, and had consented to participate in the study were included. Clients with history of psychiatric disorders and those who have missed or stopped ART on medical ground were excluded from the study.

Methods used to measure adherence include subjective ones such as provider and patient reports of adherence, use of standardized patient-administered questionnaires (General and Specific), while objective methods include counting of remaining dosage units, electronic monitoring device (Medication Event Monitoring System, MEMS) and the use of pharmacy prescription records (WHO, 2015). No single method is considered optimal and feasible combinations are expected to provide more accurate information about adherence (WHO, 2015). Nigeria, pharmacy records may be inaccurate and misleading as patients patronize several pharmacies, MEMS would be financially unfeasible and so standardized patient-administered questionnaires are considered the most appropriate in these circumstances.

The primary outcome measure of adherence to HAART was determined in this study using a modified version of the six items, self-reported Morisky Medication Adherence Report Scale with Yes/No responses. Each positive response attracted one point while negative responses attracted zero. A total score less than 75% (4.5/6) was regarded as being non-adherent (Charurat et al., 2010; Najjar et al., 2015). The Morisky scale has been used across many chronic diseases, including HIV/AIDS, as a self-reported measure of adherence to medications and has demonstrated good reliability and predictive validity (Barclay et al., 2007; World Health Organization, 2003; Horne et al., 2013).

Medication beliefs were assessed using the nine items of greatest relevance to HAART medication adapted from the beliefs about medicines questionnaire (Cronbach alpha: necessity = 0.74, concerns = 0.80) (Thorneloe et al., 2017). Three of the questions were from the ‘necessity’ of using HAART medications domain (patients belief about the importance of using a medicine) and five were from the ‘concerns’ about medications domain (worries about side-effects, interference with normal life, etc). In computing the medication belief scores, positive responses were scored ‘one’ while negative responses were scored zero. The higher the score in each domain, the higher the belief of respondents in respects of necessity for the medication or concerns about the medications.

Ethical clearance to conduct the study was granted by the State AIDS Control Agency and the Lagos State University College of Medicine. Written informed consent was taken from all the participating respondents.

Data analysis was performed using Epi Info Software (2008 version 3.4.1) Descriptive statistics in terms of frequencies and means were used to describe socio-demographic variables, medication beliefs, and medication adherence. Fisher’s exact test or Pearson's Chi Square (c2) test of statistical significance were conducted to assess statistical significant association between socio-demographic variables, medication adherence and belief, as well as locus of control. Furthermore, correlation studies were used to further test for associations between general locus of control and medication beliefs/adherence. Level of significance for all tests was set at p-value <0.05.

A total of 302 HIV positive persons on HAART completed the study. They were mostly females (n=202; 66.9%) with a mean age of 39 ± 10 years. The majority of the respondents had at least secondary school education (80.4%), while about 22% of them had tertiary education. Other aspects of the socio-demographic characteristics are shown in Table 1. Regarding adherence to medication, about a third (30%; n=90) of respondents were adjudged non-adherent (Table 2). Table 2 further shows that the most common nature of non-adherence reported is forgetting to take medication (28.2%; n=85) followed by deliberate alteration of dose (20.9%; n=63). Other common nature of non-adherence to HAART among respondents is shown in Table 2. On medication beliefs, the majority (85.8%; n=259) felt that they would still become very sick despite taking their HIV medications while 80.5% (n=243) of respondents had concerns about the cost of the HAART medications (Table 3). However, 88.1% (n=266) go on to report that taking HIV medications can improve their health and prolong their lives. Other forms of medication beliefs are as shown in Table 3.

Except for the observation that the mean age of those who were adjudged adherent was significantly younger than the non-adherents (P=0.001), there was no significant difference in the mean score for medication beliefs (Concern or Necessity) as well as locus of control scales (Chance, Powerful Others, or Internal) between those who were adjudged adherent or non-adherent (Table 4). 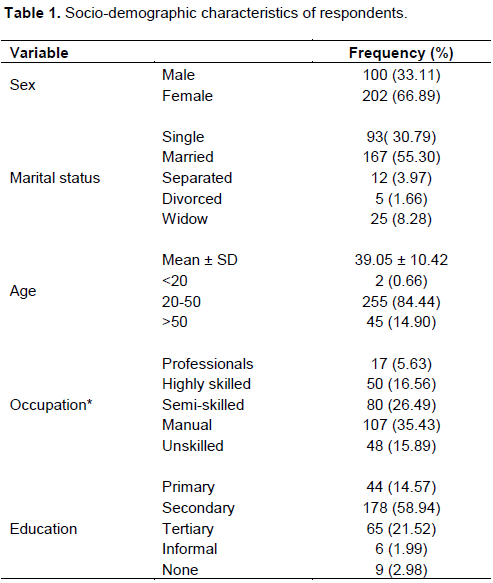 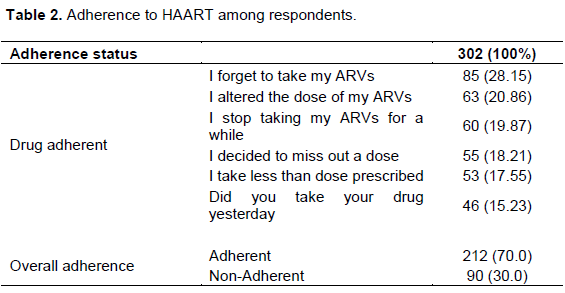 The present study shows that about 70% of respondents reported adherence to medication. This is very much higher than what has been reported in similar studies conducted in Nigeria. For instance, in a systematic review by Monjok et al. (2010) most of the studies from Nigeria which used self-reports (as used in the present study) to assess medication adherence reported rates that ranged from 44 to 65% among attendees of general HIV clinics in Nigeria. Since most of  the  studies  included  in  the systematic review were mostly conducted about a decade ago, passage of time may have improved medication adherence among HIV patients. Most of the factors which have been reported as militating against medication adherence among HIV patients in Nigeria are modifiable and may have improved over time. These factors include cost of therapy, medication side effects, non-availability of ARV drugs, and the stigma of taking the drug (Kourmousi et al., 2015). Improved drug formulation, increased access to drugs, and  stigma  reduction strategies may have yielded desired impact on medication adherence. A more recent study conducted same catchment area with the present study has also recorded self-reported adherence rate as high as 78% (Kasumu and Balogun, 2014).

Forgetting to take the medications and skipping a dose (ostensibly to avoid side effects) is the leading form of non-adherence in the present study which is consistent with results from other parts of Africa (Kasumu and Balogun, 2014; Byakika-Tusiime et al., 2005). Although a significant proportion of respondents hold a few erroneous beliefs about the medications, something that has been reported in other studies in parts of Africa (Mthembu and Van Wyk, 2014), the overall mean score on medication beliefs among respondents was largely positive. Overall, however, the mean score on medication belief was not significantly associated with medication adherence. The implication is that, even when they may hold certain negative beliefs about the medications, respondents were still as adherent as those who held more positive beliefs. This finding is counter-intuitive as one would have expected that holding a negative notion about medication should translate to poor adherence. Furthermore, literature has not shown consistent relationship between medication beliefs and HIV medication adherence, and where it does, the effect size has been small or medium at best (Langebeek et al., 2014). Being younger was significantly associated with better adherence in the present study. This may have to do with younger persons being better motivated.