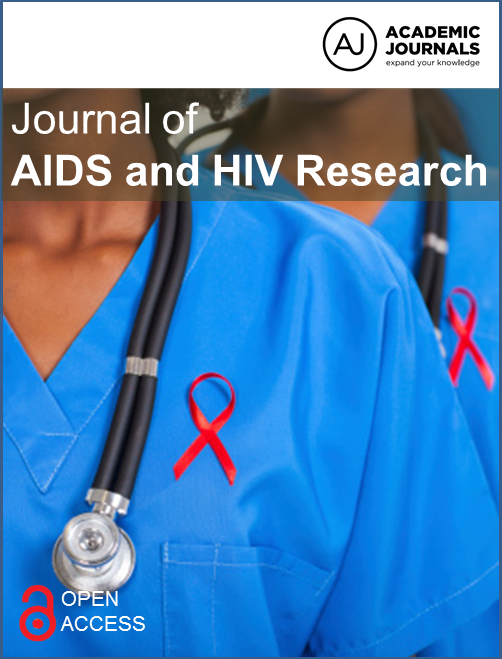 Cluster of differentiation 4 (CD4) cell count recovery is used in determining disease progression and outcome monitoring. This study was conducted to determine the trends of CD4 cell count recovery, and its determinants in Hawassa university referral hospital, Ethiopia. Retrospective cohort study design was employed to gather relevant data among human immunodeficiency virus (HIV) positive-patients visiting Hawassa University referral hospital. Data were collected from December 1, 2014 to May 15, 2015. A total of 2400 medical records of adult patients aged above 15 years were examined. Of these, 1479 were evaluated and analyzed. Multivariate logistic regression was constructed to determine predictors of change in CD cell count. The median change in CD4 cell count from baseline to six months was 124 cells/μl. 19.3% of patients were at risk of immunologic non-response at 12 months of treatment. Patients with a baseline CD4 cell count of less than 100 cells/ml were 5 times more likely to exhibit immunologic non-response compared to those with a baseline CD4 cell count > 350 cells/μl. Baseline body mass index (BMI) and sex were associated with failure to attain ≥200 cells/μl at 12 months of treatment. Rapid recovery of CD4 cell count occurred during the first six months of treatment in this study. However, significant proportions of patients were at risk of immunologic non-response. Low baseline CD4 cell counts were predictive of non-response in this setting. The findings suggest that initiation of antiretroviral therapy (ART) at a CD4 cell count greater than 500 cells/μl is associated with better immune recovery.

Antiretroviral therapy (ART) began in Ethiopia in 2003, and was made freely available in 2005. An estimated 769,500 Ethiopians are currently living with human immunodeficiency virus (HIV), of whom 542600 require ART and 367 000 are currently taking the treatment (FDRE, 2014). Recognizing the need for ART, the government of Ethiopia issued the first ART guidelines in 2003. Revisions were issued in 2005, 2008 and 2014 to facilitate a rapid scale-up of the service (FDRE, 2014; FMOE, 2008; MoH, 2005). These guidelines recommended measurement of CD4 cell count every six months as a major tool for monitoring treatment outcome. In a resource limited setting like Ethiopia, where viral load determination is expensive, CD4 cell count will remain an important tool for monitoring response (FDRE, 2014). ART is celebrated for its reduction of mortality. The mortality rate was 15.4 per 100 person-years of observation (PYO) in the highly active antiretroviral therapy (HAART) group, and in the pre-HAART group it was 58.1 per 100 PYO in an early study conducted in Ethiopia (Jerene et al., 2006b).
However, mortality is higher in Ethiopian cohorts than in patients in developed world (Jerene et al., 2006b; Jerene et al., 2006a; Johansson et al., 2008). Higher mortality is partly attributed to delay in the initiation of treatment, at a time when the disease has progressed to a state of severe immune depletion (Jerene et al., 2006b; Berhe et al., 2012). Studies examining the association between baseline CD4 cell count and immune recovery following ART report conflicting results. It has been reported that higher baseline CD4 count is associated with reduced early mortality (Stephen et al., 2008), and counts of less than 50cells/μl is associated with high mortality in both experienced and naive patients on HARRT (Zachariah et al., 2006; Evan et al., 2003). Some studies have revealed that a significant percentage of HIV-infected patients who initiate therapy with a low baseline CD4 cell count do not achieve a normal CD4 cell count, even after a decade of effective treatment (Lange et al., 2002; García et al., 2004; Lederman et al., 2003; Kaufmann et al., 2002). Other studies indicate patients with low baseline CD4 cell count achieve better CD4 cell recovery compared to those with high baseline CD4 level (Lawn et al., 2006).
In another study, researchers report no association between baseline CD4 cell count or viral load, and immunologic or virologic response after commencement of ART (Kilaru et al., 2006). The survival rates of human immunodeficiency virus infection and acquired immune deficiency syndrome (HIV/AIDS) patients in Ethiopia can be improved given the factors responsible for death in Ethiopian cohort of patients initiating ART are well explored. One possible explanation for high mortality in Ethiopia is that treatment in Ethiopia begins after sever immunosuppression. There are, however, conflicting results in the literature about advantage of early initiation before sever immune damage. Given that, factors affecting CD4 cell count recovery after ART is unclear in Ethiopia setting, this paper explores such factors. Furthermore, there are few large-scale studies examining immunological correlates, with long-term follow-up, of Ethiopian patients. We present the overview of the trends of CD4 cell count recovery and its determinants in an Ethiopian patient population using routinely available clinical data.

Study area
The study was conducted in Hawassa University Referral Hospital, a major referral hospital serving over 15 million people in a region located 270 kilometers south west of Addis Ababa, Ethiopia. The hospital provides general service including HIV/AIDS comprehensive care and treatment.
Study design
We used a retrospective cohort study design to gather relevant data from the records of HIV positive-patients who visited the hospital between 2005 and 2014.
Study period
Data was collected from December 1, 2014 to May 15, 2015.
Inclusion and exclusion criteria
Patients older than fifteen years old during the initiation of the treatment and initiated treatment at Hawassa University hospital, and whose patient record included the information necessary for the current study were included. Patients with competing causes of death (cause of death other than HIV, those with immune compromising chronic diseases such as diabetes, thyroid disease, or any non-AIDS malignancies) were excluded.
Sample size
A total of 2400 medical records met the age requirement from a total 2,950 medical records. About 550 medical records of pediatric (ages less than 15) were excluded. Data collected from 921 medical records were excluded because they have missing baseline and six month CD4 cell count. Therefore, 1479 medical records included sufficient information for inclusion in the current study, were evaluated and analyzed. Secondary data were extracted from the ART register database, and unique identities were assigned to these records.
Data collection tool
We used a data collection tool that was previously described, and that was developed using the federal ministry of health HIV care/ART entry and follow-up forms used in the ART clinic of the Hospital (Naftalin et al., 2015; Mutimura et al., 2015; Luz et al., 2014; Kanters et al., 2014; Calmy et al., 2012; Boulassel et al., 2012; Wright et al., 2011; Waters et al., 2011; Okulicz et al., 2010; McKinnon et al., 2010; Lok et al., 2010). Data sources included the pre-ART registration, lab requests, monthly cohort and follow up forms, the ART intake form, the patients’ card, and the death certificate. We additionally examined the home visitors’ registration, and records of phone calls made by drug adherence professionals, or that revealed death of a patient following inquiries about missed appointment. Where baseline CD4 levels were not measured we relied on tests performed within one month before ART was initiated.
Study variables
The data extraction form includes the following variables: socio-demographic characteristics (age, sex, height, religion, marital status, educational status), baseline laboratory values (CD4 cell count), world health organization (WHO) clinical staging, duration on ART, and regimen type)
Data quality assurance
Data was collected by counselor nurses trained in comprehensive ART, working in an ART clinic. Data quality was assured with the help of the data collection tool through routine cross-checking of data on a daily basis. Data collection forms were examined for completeness and consistency during data management, storage, and analysis by investigators. A pilot study was conducted in order to test consistency of the tool, and to ensure data quality. The tool was revised using feedback from the pilot study. Data encoded and edited by the principal investigator was checked by co-investigators.
Operational definitions
Change in CD4 cell count
A general term used to quantify immunologic recovery. In this paper it is measured as: baseline-to-six-month median change in CD4 cell count, the median six-month-to-12-month change, immunologic non-response, and failure to attain 200 cells/μl
Baseline-to-six-month median change in CD4 cell count
The difference between the median of six months measurement and baseline measurement was recoreded.
The median six-month-to-12-month change
The difference between the median of 12th month measurement and 6th month measurement was recorded
Immunologic non-response
An increase of <50 cells/μl, following 12 months of treatment and was calculated using data from records that included a CD4 cell count at baseline, and at 12 months of treatment (n=1140).
Failure to attain ≥200 cells/μl following 12 months of treatment
This response measure used to quantify non-response in subsample of those who had baseline CD4 cell count of < 200 cells/μl was calculated using data from records that included a CD4 cell count at baseline, and at 12 months of treatment (n=681)
Baseline CD4 cell count
The CD4 cell count was measured just during the initiation of treatment in treatment of naïve-patients.
Ethical statement
Ethical clearance was obtained from Hawassa University Medicine and Health Science College Institutional Review Board. Written consent could not be obtained for this retrospective study so the investigators were authorized by the institutional review board (IRB) to use the data after de-identification prior to collection.
Statistical analysis
Data were entered and analyzed using statistical package for social sciences (SPSS) for Windows, version 20. Patient cohort characteristics were described in terms of mean/median value for continuous data and percentage for categorical data. Multivariate logistic regression was constructed to determine predictors of change in CD cell count, factors determining non-response, and failure to attain a CD4 count of 200 cells/µlfollowing12 months of treatment. All statistical tests were considered significant if the two-sided P-value was<0.05.

Socio-demographic profile of the study participants
Routinely collected data from a total of 1479 medical records of HIV-infected patients on HAART were reviewed and analyzed. At baseline, 90% of the cohort where under the age of 45 years with a mean (SE) age of 33.3(0.23). 62.4% were female, 54.4% were married and 9.5% were pregnant. 37.1% had attained secondary-level education and 14.4% were illiterate. Complete socio-demographic profiles of the study population are listed in Table 1. 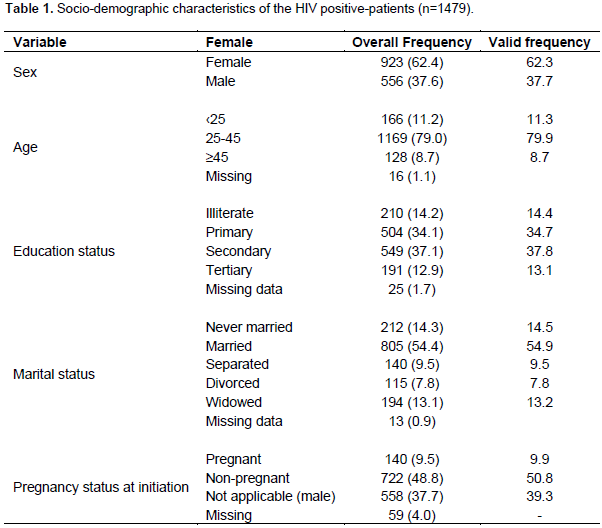 Clinical profiles of the patients
More than one-third of the patients (38.7%) initiated treatment with a TDF+3TC+EFV regimen. At baseline, more than half of the study participants (53.7%) were in clinical stage III. 694 (46.9%) patients had a normal BMI at baseline and 258 (17.4%) were underweight. Clinicalprofiles of the full patient population are listed in Table 2. 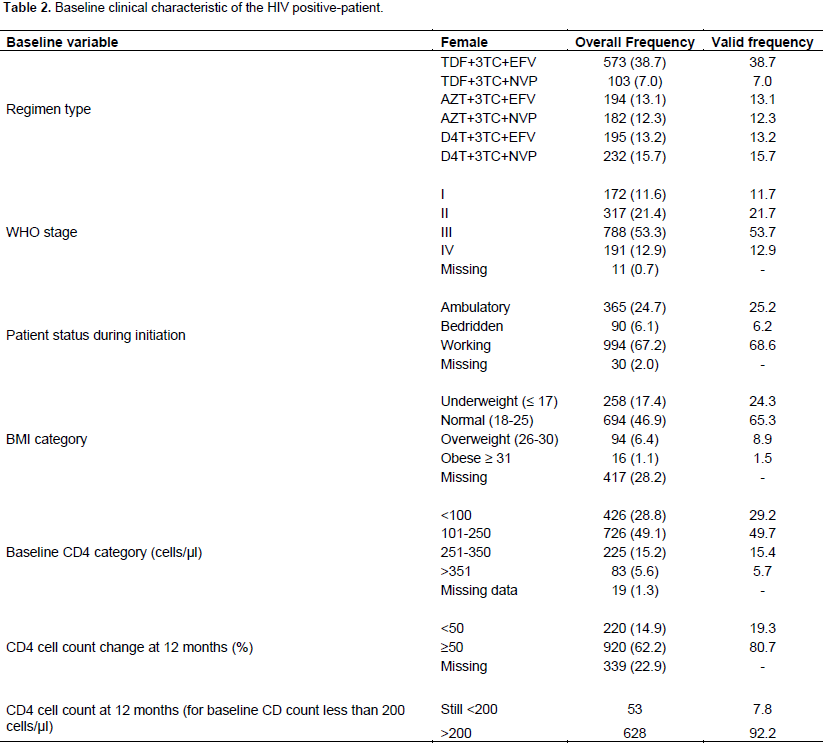 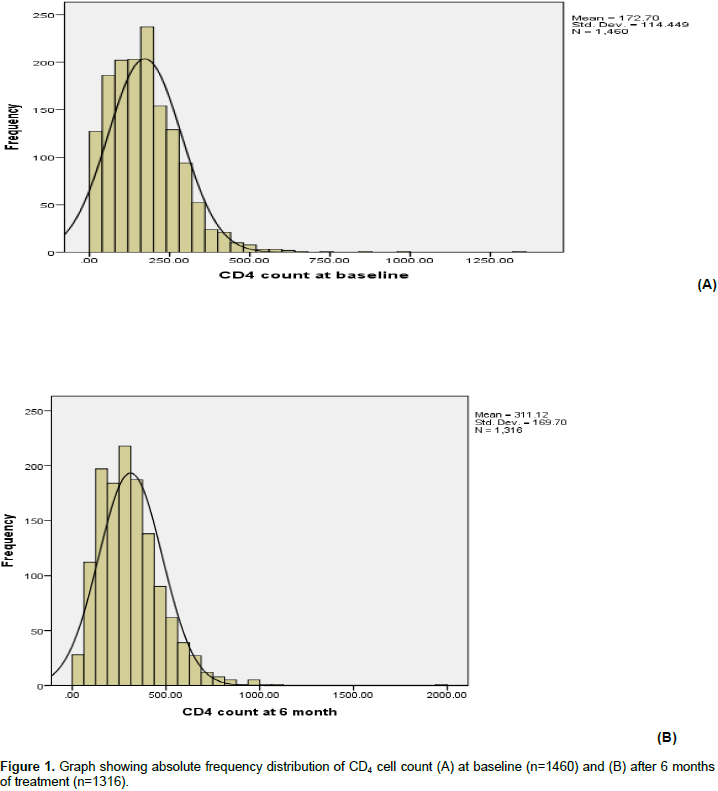 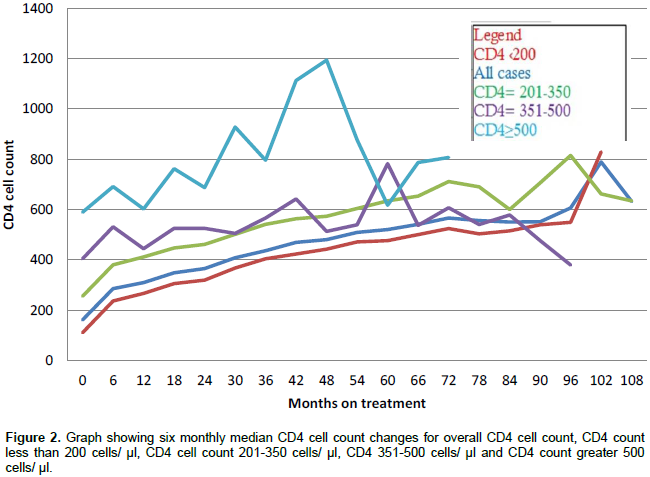 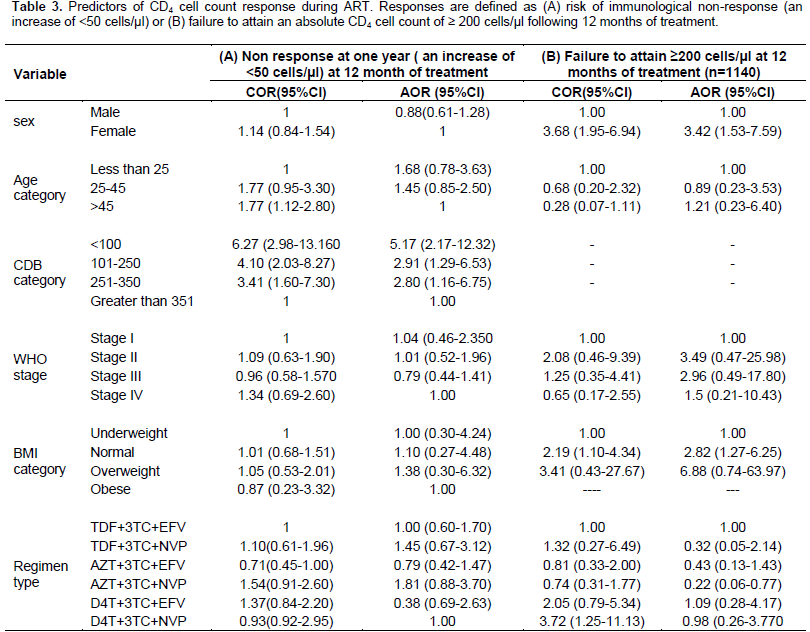 The authors would like to forward their greatest acknowledgment to Dr. Elizabeth Silva, for her as assistance in language editing. They would also extend their deepest gratitude to ART staff members (Selamawit Gutema, Mohammed Adem, Tadiwos Beyene, and Meseret Regassa) of Hawassa university referral Hospital for participating in data collection.