Globally, an estimated 36.7 million (34.0 million to 39.8 million) people live with HIV; or approximately 91% of adults aged 15 to 49 are living with HIV, 70% of it shared by Sub-Saharan Africa with nearly 1 in every 20 adults (4.7%) living with the virus (UNAIDS, 2016, 2012). The human immunodeficiency virus type one (HIV-1), a causal organism of acquired immunodeficiency syndrome (AIDS), destroys immune system thereby allowing any opportunistic infections leading to death of the patient. HIV-1 is known to be transmitted by the transfer of blood or blood products, semen, vaginal fluid, pre-ejaculated fluid, breast milk and using intravenous drug containing injections (Sharma, 2014). In Ethiopia, the prevalence of HIV in adults is estimated to be 1.5% which represents 800,000 people living with the virus Ethiopia (FDR, 2014). In Gambella, one of the nine regional states of Ethiopia, the prevalence of HIV is four times higher than the national rate of 1.5% HIV/AIDS in Ethiopia, 2014). In this region, there are around 4359 people living with HIV, the annual incidence of new infection is 393; and annual deaths and orphans caused by HIV is 111 and 2179, respectively (Ethiopian Federal Ministry of Health, 2005).
Though typically well-informed about HIV overall, college students still have misconceptions about certain facts regarding transmission. Available studies among Ethiopian university students (young people), reported gap on HIV/AIDS preventive behaviors. For instance, 56.3% of Jimma University students involved in unprotected sex such as with casual partners and they failed to recognize that they were at risk of HIV infection, and 12% of them were sero positive ( Belachew et al., 2004). Similarly, a cross-sectional study done among Gondar University College of Medical Sciences students reported that 31(8.1%) of the students testified sexual contact with prostitutes and only about 20 (61.9%) of them used condom (Fitaw and Worku, 2002). Another cross-sectional study done among Madawalabu University students reported that from 160(42.3%) sexually active students, 81(56.2%) practiced unprotected sex; and 37(23.1%) students had lifetime multiple sexual partners. Besides, the study showed that 30(24.0%) of students had sex with commercial sex workers (Mengistu et al., 2013). Other study done among Haromaya University students showed that of the 41.2% sexually active respondents, 39(28.9%) of them reported multiple sexual partners (2 to 5 partners on average).
In this study, 79(52.7%) of students had reported sex with commercial sex workers and 135 (75.4%) with casual friend (Dingeta et al., 2012). Available evidence across the world documented conflicting findings related to predictors of HIV/AIDS preventive behaviors of youth. For instance, in studies conducted among Ghanaian (Adih and Alexander, 1999)and South African (Peltzer, 2000)University students, perceived susceptibility to HIV significantly predicted the consistent use of condom, but in others it is reported that perceived susceptibility had no association with HIV preventive behaviors of consistent condom use, abstinence and being faithful to one sexual partner (Abraham et al., 1992; Holschneider, 2000). A study conducted among Japanese and Asian-American college students found perceived severity of HIV/AIDS as significantly predictor to their consistent use of HIV preventive behaviors (Iriyama et al., 2007).  On the contrary, one study , in Haiti, showed that 53% of youths, who perceived high barriers to condom use, were less likely to have consistently used a condom than those with low perceived barriers (Holschneider, 2000). Similar studies, conducted among South African (Peltzer, 2000) and Ghanian (Adih and Alexander, 1999)university students, reported high students’ perceived barrier was associated with the reduced intention to use condom.
This high perceived barrier also significantly interacted with the student’s perceived susceptibility and self-efficacy (Adih and Alexander, 1999). Besides, high self-efficacy of condom use was found to significantly predict past condom use and condom use intensions, and voluntary HIV counseling and testing among Tanzanian (Vermeer et al., 2009), Taiwanese (Lin et al., 2005), South African (Peltzer, 2000), and Ghanian (Adih and Alexander, 1999)university students. In Ethiopia, a cross sectional study conducted among 393 mining workers reported that 178 (45.3%) and 247 (62.8%) of them reported high perceived susceptibility and high perceived severity to HIV/AIDS, respectively (Abdissa et al., 2014). The study also showed that HIV preventive behavior was negatively associated with being in middle, higher and highest income and positively associated with completing secondary, tertiary school and self-efficacy. Another cross sectional study among Butajira high school, 658 students showed that perceived susceptibility, perceived barrier and perceived benefit predicted their voluntary counseling and testing behaviors (Abebe and Mitikie, 2009).This study was conducted with the aim of filling the gap by identifying predictors of HIV/AIDS preventive behaviors among college students of Gambella town using Health Belief Model.
Rationale to use health belief model
Health Belief Model (HBM) has been one of the most widely used conceptual frameworks in health behavior research, both to explain change and maintenance of health-related behaviors and as a guiding framework for health behavior interventions. It addresses the likelihood of taking recommended health action as influenced by specific health beliefs related to the health problem and recommended health actions. These beliefs are the individual’s perceptions of the threat posed by a health problem (susceptibility, severity), the benefits of avoiding the threat, and factors influencing the decision to act (barriers, cues to action, and self-efficacy). The core constructs of the model include; perceived susceptibility one’s subjective perception of the risk of contracting a health condition, Perceived severity feelings concerning the seriousness of contracting an illness or leaving it untreated, Perceived benefits the believed effectiveness of strategies designed to reduce the threat of illness and risk, Perceived barriers feeling nuisance as someone who takes particular health actions or results from the actions, Cues to action events, either bodily or environmental, that motivate people to take action and Self-efficacy the belief of being able to successfully execute the behavior required to produce the desired outcomes. In addition to the basic constructs, originators and researchers included some variables called modifying factors. These factors can influence individual perceptions and, indirectly, health related behaviors. These factors expected to modify the variances explained by the main HBM constructs. The variables which include under modifying factors are; demographic, socio-psychological, and structural (Glanz et al., 2008).

Study design and setting
Facility based cross sectional study design was employed 2nd to 4th March, 2015 in Gambella town. Gambella town is the capital city of the Gambella regional state characterized by hot and humid climate. Around 51,660 inhabitants live in the city. Besides, the city consists of one health center and one health post, which are under the city’s municipality, and 29 private health facilities. In Gambella city, there are five Colleges with 5412 regular students enrolled in the academic year 2015.
Study participants and sampling method
Among the available colleges of Gambella city, two colleges were selected by random sampling method. The study used single population formula to determine the sample size. By taking population proportion of 40%, which was taken from previous study finding on preventive behavior of HIV/AIDS in Gambella city among high school students (Mitike et al., 2005), and 10% non-response rate, the study final sample size was 714. This sample size was proportionally allocated to those selected college students. Sampling frame was created by using student’s registration books, which was taken from the two selected colleges’ registrar office. By using computer generated simple random number table method, number of study participants from each department was determined. Finally, the 714 regular students were selected using simple random sampling technique.
Measurement
The study used an English version of self-administered questionnaire, which was adopted from published literature related to the topic, and it was pre-tested on 10% of the study population. The questionnaire consisted of items related to knowledge of HIV/AIDS preventive behaviors (5 items). Besides, it included items related to constructs of health belief model such as perceived susceptibility to HIV/AIDS (5 items), perceived severity of HIV/AIDS (6 items), perceived benefit from undertaking HIV/AIDS preventive methods (6 items), perceived barriers in undertaking HIV/AIDS preventive methods (7 items), and perceived self-efficacy to carry out HIV/AIDS preventive methods (7 items). Mean score of HIV/AIDS related perceived susceptibility, perceived severity, perceived benefit, perceived barriers, and self-efficacy was obtained after summing the scores of respective items. The score below the mean score was taken as low and vice versa. On the other hand, respondents who retorted 3 or more correct answers are categorized as having good knowledge and below 3 as poor knowledge on HIV/AIDS preventive behaviors.
HIV/AIDS preventive behavior: was measured as, an individual abstaining from sexual intercourse in the last one year until the time of data collection or using condom consistently at each sexual intercourse in the last six months.
Statistical analysis
Data were analyzed, using Statistical Package for Social Sciences (SPSS version 21), to generate descriptive statistics such as means, standard deviation, frequencies, and percentages. For categorical variables, like sex, ethnicity, etc., proportions were computed. Besides, variables related to perceptions of HIV/AIDS were categorized as high and low based on the mean scores that were computed from the sum scores. Those scores above the mean score were considered as high and vice versa. After creating dummy variables, multicollinearity was checked and the variance inflation factor was less than 10. Moreover, reliability test was performed for each constructs and Cronbach alpha (α>0.7). On the other hand, bivariate and multivariate logistic regression was used to identify factors predicting HIV/AIDS preventive behaviors regular college students. Those variables with p-value of ≤0.25 were entered to multivariate logistic regression model. P-value less than 0.05 were used to declare statistical significance. Final model fitness was assessed by Hosmer-Lemeshow goodness of fit test.
Ethical approval
This study obtained ethical clearance from institutional review board of Jimma University College of Health sciences. Co-operation letter was taken from Department Of Health Education And Behavioral Sciences. Permission letter was obtained from Gambella Administrations of the Regional Health and Education Bureau and other two selected colleges.  An information sheet was attached with each questionnaire to provide the study details and rights of the study participants. Written informed consent was obtained from the study participants. Data were kept anonymous and confidential during all stages of the study.

Background characteristics
Out of 714 students, 673 students participated in the study with response rate of 94.3%. The respondents’ age ranged from 18 to 28 years with mean age= 20 years ± SD = 2.2 years. On the other hand, 58% of the total respondents were male. Furthermore, 99% of the participants were single. In terms of religion, 41.0, 36.1 and 16.4% of the study students were orthodox, protestant and Muslim, respectively. By ethnicity, 28.2, 24.1, and 22.0% of the respondents were Oromo, Anuak and Nuer, respectively. On the other hand, average monthly income of the students was 287 Ethiopian Birr. Besides, 38, 33 and 29% of the participants were second, first and third year college students, respectively (Table 1). 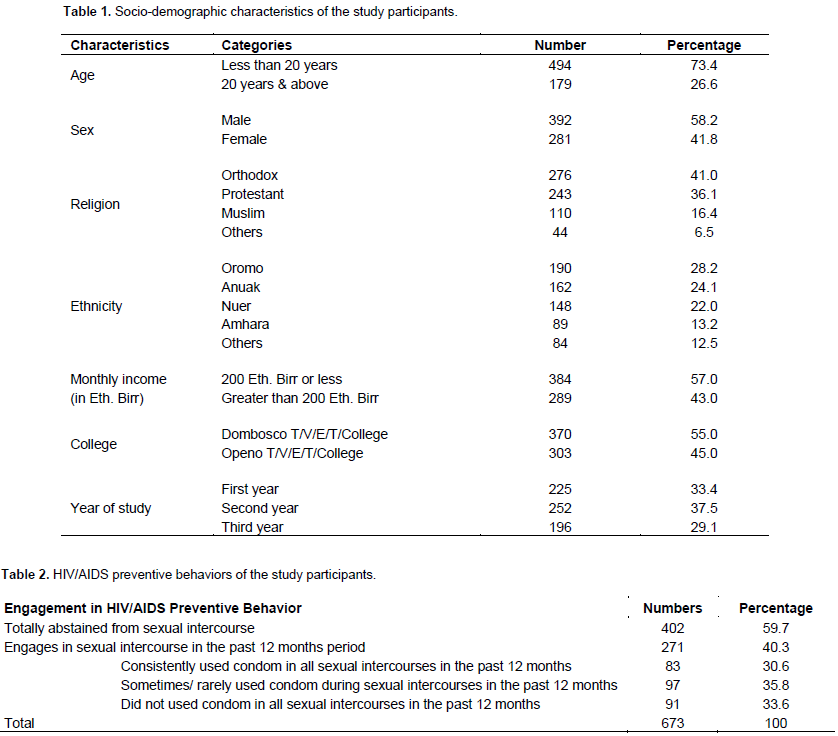 Engagement in HIV preventive behavior
From the total of the study students, 59.7% of them had abstained from sexual intercourse. Out of the 40.3% students, who had sexual intercourse in the past 12 months, 30.6% of them had consistently used condom whereas the other 33.6% students did not use condom (Table 2).
Health belief model constructs of participants
43 and 61.9% of the college students had high- perceived susceptibility and severity of HIV/AIDS, respectively. Besides, 77.4% of the college students had high-perceived benefit from exercising HIV/AIDS prevention methods. Similarly, 61% of students had high-perceived self-efficacy to undertake HIV/AIDS prevention methods by themselves. However, 57% respondents had high-perceived barrier to undertake HIV/AIDS prevention methods (Table 3). Large number of students aged below 20 years old (78.1%) engaged in HIV preventive behaviors than those students with 20 years old and above. About 74.5% of students with 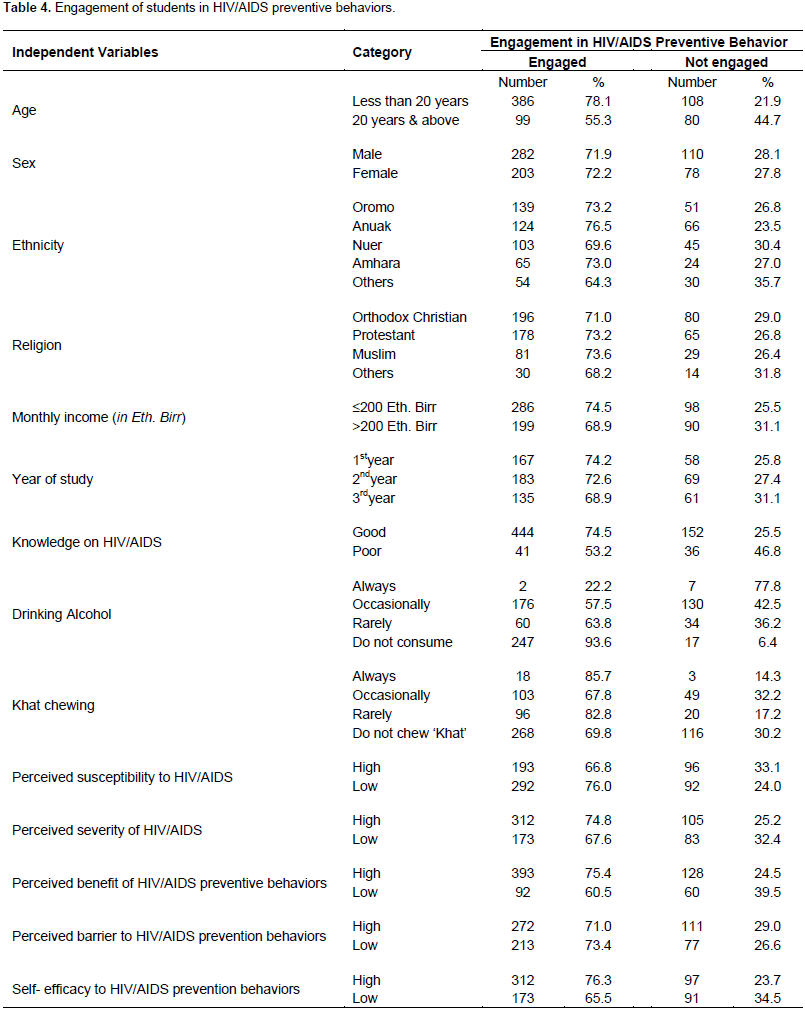 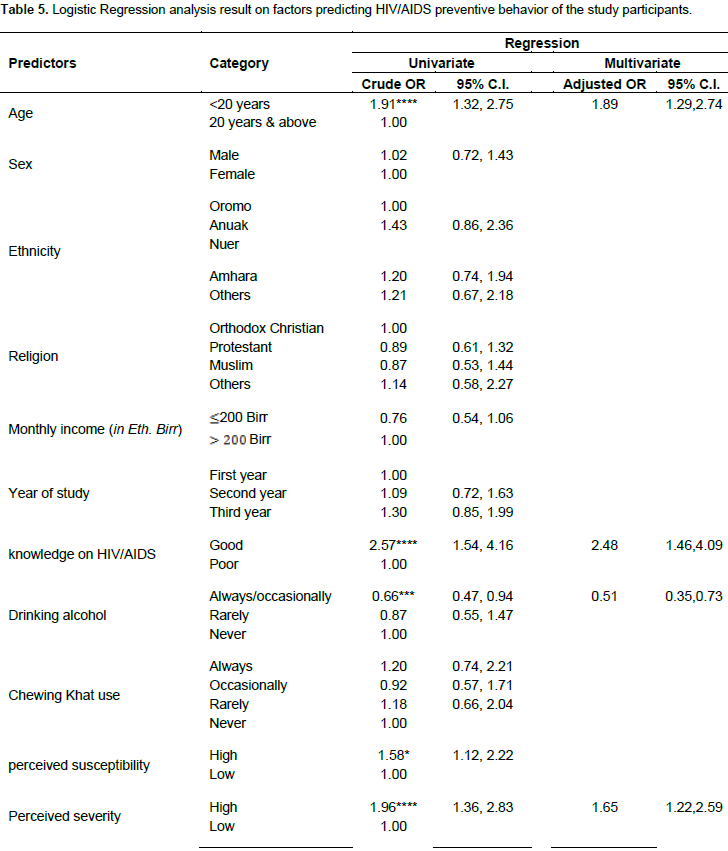 The investigators of this study pass their deepest thanks to Jimma University for supporting the research activities financially.