Both the African Charter on the Rights and Welfare and the United Nations Convention on the Rights of the Child place premium on having children grow up in families. Foster care is one of the opportunities that can be used to ensure that children grow up in families on the African continent and Zimbabwe in particular. There are however some minefields which have to be explored carefully. The paper dedicates some attention to inhibitive cultural dimensions that have to be tackled delicately in promoting foster care. The paper also debunks the thinking that foster care is a destination in itself by showing the lived realities of children in foster homes. This has been done by exploring ontologies of foster care in the context of Zimbabwe. General typologies of foster parents are given showing the nexus between quality of life for children and the types of foster parents. A qualitative research design was employed, where the data were collected through exploratory tools namely focus group discussions, key informant interviews and in-depth interviews.

The preambles of both the United Nations Convention on the Rights of the Child (UNCRC) and the African Charter on the Rights and Welfare of the Child (ACRWC) place premium on having children grow up in families. The African Children’s Charter, in particular, notes that ‘the child occupies a unique and privileged position in the African society and that for the full and harmonious development of his personality, the child should grow up in a family environment in an atmosphere of happiness, love and understanding… [Emphasis added].This paper is premised on this aspiration. Foster care  is  one  of  the instruments that can be used to ensure that children grow up in family environments. There is an expectation that the family environments that children find themselves in have atmospheres of happiness, love and understanding. Both the UNCRC and the ACRWC as the normative frameworks on children’s rights posit that the protection of children is to be covered by the 'parens patriae' authority of the state.
At national level, Section 19 of the Zimbabwean Constitution is dedicated to national objectives that are specific to children. The national objectives are supposed to guide the State and all institutions and agencies of government at every level in formulating and implementing laws and policy decisions that will lead to the establishment, enhancement and promotion of a sustainable, just, free and democratic society in which people enjoy prosperous, happy and fulfilling lives.
In consonance with the preambles of the UNCRC and the ACRWC, the Zimbabwe Constitution places premium for children to grow up in a family environment. Chapter 2(19) of the constitution posits that:
The State must adopt reasonable policies and measures, within the limits of the resources available to it, to ensure that children:
(i). Enjoy family or parental care, or appropriate care when removed from the family environment;
(ii). Have shelter and basic nutrition, health care and social services;
(iii). Are protected from maltreatment, neglect or any form of abuse; and
(iv). Have access to appropriate education and training [emphasis added].
Foster care presents an opportunity for the fulfilment of the objectives as set out in 19 (2a) of the national constitution. As such foster care is being promoted in Zimbabwe as a tool to achieve the goal of having all children growing in family environment.
Beyond encapsulating the issue of children growing up in a family environment in the national constitution, Zimbabwe has established a child protection architecture which includes foster care. The National Orphan Care Policy (1999) recognises the family, extended family and community as the ideal place for a child to develop. The National Orphan Care Policy identifies a six tier system for child protection starting at family level as the first safety net. The next best placement for the child where the family, extended family and the community have failed is within the foster care system. In a foster care setting, it is expected that children are protected and have access to all the rights such as the right to be loved and cared for, the right to shelter, food, medical care, identity and education. On the hierarchy of the child care systems in the country, foster care is considered as the fourth tier of protection. Scholars such as Grant and Yeatman (2012); Sherr et al. (2017) posit that foster care, if efficiently administered, can be the next level of care should the family fail to provide for the children. The legislative framework on child protection in the country is capped by a wholesale Children’s Act Chapter 5:06. The Act provides specific definitions and processes  which gives the magistrates courts the power to place children under foster care through issuance of a court order that is renewed after every 3 years.
i African Charter on the Rights and Welfare of the Child (ACRWC), Preamble
ii  Zimbabwe Constitution, Section 81 (1)
iii  Zimbabwe Constitution, Section 19 (2)
iv The six safety nets for child protection start with the nuclear family, followed by extended family, then community care, foster care, adoption and institutional care as the last resort. 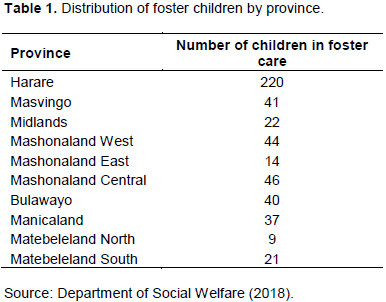 QUALITY OF LIFE FOR CHILDREN IN FOSTER CARE

ADMINISTRATION OF DISCIPLINE IN FOSTER HOMES

As momentum is growing in making foster care be a viable child protection tool in the country, there is need to interrogate some of the factors that are limiting its uptake. This paper has shown that there are several embedded cultural and traditional beliefs that would need to be confronted through foster care promotional initiatives.
The research also showed that foster care provides children with an opportunity to grow up in a normal family whose characteristics are heterogeneous hence needing to be differentiated. Overall, the quality of life for children in foster care is varied. Some of the children get into families that set them a platform to flourish whilst others get into families which themselves have limited opportunities. This is reality of human existence since all the families cannot have similar opportunities for their children. Again, the aspiration is for children to grow up in a family environment which fosters child development. The screening process in Zimbabwe does not favour only the rich. The research has shown that families that are poor have been given children to foster. There may be a risk of discriminating against poor families who may want to foster children. With higher demand and limited supply for foster care, when a family goes through the entire screening process, it is a huge opportunity for a child who may  spend  their  entire  childhood  in  a  residential child care institution. If the process were to set high wealth threshold for approving the kind of families that can foster children, it would be flawed to assume that well to do families better protect children. The paper has shown that there are different child protection issues in all the three typologies of foster families. The paper has given caution that placing a child in foster care is by no means the end in itself as there are various vicissitudes and nuances within these families which need closer attention to ensure better quality of life for children.