Natural resources in Africa; a gift or curse: The case of Nigeria

Achieving sustainable economic growth in Nigeria has been a long-standing concern over the past decades (Economic Commission for Africa, 2011). Furthermore, Nigeria is an African country that has been struggling with its challenges mainly poverty and unemployment. However, Nigeria has 37 billion barrels of oil as reserve and has an oil and natural gas revenue estimated to be 50 billion US dollar in 2015 (U.S. Energy Information Administration, 2015). This reliance on petroleum as the main source of the country’s wealth has contributed greatly to economic instability since the late 1970s. The fluctuations in the petroleum   prices,   high   levels   of corruption and mismanagement among government officials have made sustainable development unachievable. Furthermore, this deception brought extreme poverty to the majority of Nigeria’s citizens (Iyoha and Oriakhi, 2002). Industrial and manufacturing have been an important contributor to gross domestic product. Manufacturing’s share of export revenues is estimated at 2.1% of exports in 2017 (World Bank Database, 2017). This share rate of exports is relatively low. The policy makers hoped to surge through retreating capital outflows and eliminating impediments to private-sector  activity.  On  the  other  hand,  the  services sector estimated the GDP at 65%. The most important branch of the services sector is banking and finance. Non-oil exports remain minor in Nigeria at 5% of all exports. Trade and agriculture account for 75% of the non-oil economy. The strong registered growth rates in those sectors have been important for explaining the non-oil economic expansion. The rapidly growing sector of telecommunications has been significant. Furthermore, real estate and housing construction have also witnessed double-digit growth in recent years; although the shares of these sectors in GDP remain modest.
Historically, Nigeria has relied on exports of primary products to support the economy. In recent years, the Nigerian economy has witnessed an increase in the GDP growth rate due to the petroleum industry that played a key role in this growth especially in the time of oil price escalation . In the last ten years, Nigeria’s economy grew by an average of 5.16% primarily driven by the oil sector. Furthermore, the oil sector accounts for more than 30% of GDP and 70% of all exports. In addition, in 2011, the mining and quarrying including oil accounted for 33.5 % of total GDP . The oil sector accounts for a significant part of the state’s revenues and represents a source of employment. Also, oil revenue has an effect over domestic development prissily in the infrastructure development. On the other hand, negative growth of the oil sector has dragged down GDP growth. The oil robbery, illegal oil bunkering and pipeline vandalism slowed down the performance of the oil sector . Also, the non-passage of the Oil Industry Bill appears to be contributing to the little investment in exploration and exploitation of oil and gas that resulted in lack of new finds during 2013. As a result, the crude oil production dropped to an average of 2.21 million barrels per day in 2013 from 2.31 million barrels per day in 2012 (The World Bank Annual Report, 2013).  The statistics of Nigari have an interesting economy used to express whether the natural resources are gift or curse to Nigerian economy. This paper tries to highlight the roots of the failure for natural resource to have positive impact on economic development. The paper primarily investigates the paradox of economic growth in Nigeria with a key focus on natural resources. The focus is mainly on agriculture and crude oil sectors.

The aim of this study is to examine the impact of oil and agricultural over the GDP growth in Nigeria. To assess this target we proceed with the cointegration test to sense the relationship among the variables. Furthermore, cointegration technique will ensure whether long-run relationship exists or not. In the early stage of cointegration technique, Engle and Granger (1987), Granger (1986) and Hendry (1986) have made a distinguished contribution to the long-run relationship as well as the causality among time series variables. These techniques have been heavily used in the theoretical and empirical frameworks (Perron and Campbell, 1994). In the simplistic framework, the two variables or more to be said that they are cointegrated when they exhibit long-run equilibrium relationship. Also, if these two variables are sharing common trend it will be considered as cointegrated time series. However, the cointegrated series are required to have error-correction representation to indicate the changes in the dependent variable that functioned to the level of the disequilibrium in the cointegration relationship along with the changes in the other explanatory variables (Engle and Granger, 1987). The importance of the estimation method aspect is the maximum likelihood that is based on finite VAR Gussian system developed by Johansen (1991). These tests use trace statistics test and maximum eigenvalue test. Also, these tests consider all variables are endogenous to avoid any arbitrary choice of dependent variable. Furthermore, the technique has a unified framework for testing and estimating the relationship along the Vector Error Correction Mode (VECM) Enders (2008). Using this technique will rule out the possibility of the estimated relationship being spurious. Once the variables have common trend, the Granger intellect is that causality mostly exists in at least one direction whether unidirectional or bidirectional (Granger, 1986).
This study focuses on the relationship between GDP per Capita, Oil rents, Agriculture (value added), Manufacturing (value added), Services, (value added) and Gross Capital Formation. Also, in evaluating the casual linkage among the variables, we use Johansen Cointegration Test Johanson (1991) to confirm the existence of the long-run relationship. Also, we perform Vector Error Correction Mode (VECM) to ensure the model is convergence to its equilibrium over time.
Cointegration procedure
We set Ztas a vector including integrated series that has the same order with at least one cointegrating vector in the system. We assume both long-run and short-run stricture of vector Zt. Johansen Maximum Likelihood will be incorporated in the estimation and identification of the cointegration relationships among the variables counting in vector Zt. Also, Zt is vector autoregressive process of order k . 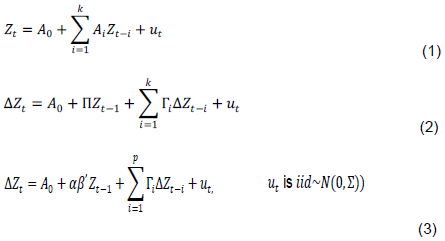 The data used are the annual data from 1980 to 2013. The data source is World Bank data base. The variables that will be used in this study are GDP per Capita, Oil rent, Agriculture value added, Manufacturing value added, Services value added and Gross Capital Formation. Table 1 shows the description of the data information. Table 2 describes the statistics of the data. All variables are in the same level with transformation to logarithm form. Also, the Oil rent, Agriculture value added, Manufacturing value added and Services value added are percentage share from the GDP.
We can emphasis from Table 2 that all variables are normally distributed based on JB test where we fail to reject the null hypotheses except the oil rent variable. Most variables are negatively skewed except GDP per capita which means there is a decrease in the income over time. This gives an indication to what extent the economy has dark view in terms of growth. Furthermore, all variables’ mean is within its median. To avoid spurious regression, we examine the data with formal tests to be consistent with the literature (Clarke and Mirza, 2006). We investigated the order of integration of each variable.
The wildly used test to be applied is augmented Dickey- Fuller (1979). Also, there are more tests to be applied (Phillips and Perron 1988) and stationary test by Kwiatkowski et al. 1992), but we will focus only on ADF test since the goal is to ensure lags requirement. Augmented Dickey-Fuller (ADF) is conducted as a test of stationarity, where the test equation is specified as follows:
From Equation 4, Δ is the first difference operator, α is the constant term, X is the log of the variable being tested and U is a stationary random error term. The numbers of augmented lag p are determined by minimizing the Akaike information criterion. The results in Table 3 indicate that the variables are not stationary at levels but stationary at first difference. For further confirmation of the stationarity of the data, the error term u was generated which is equated to the residuals. The error term (u) of the regression estimates was tested for unit root at first difference. The result showed that the data are stationary at first difference at 5% critical values (Table 4). As the order of integration of the variable is stationary, thus it is feasible to apply the Johansen co-integration methodology.
Empirical result
It is necessary to conduct Co-integration test for the model to determine if there are long run associations among the variables; it is observed that the unit root tests of the variables are stationary at their First and Second difference. Using the Johansen (1991) frameworks, the trace statistic (likelihood ratio) is compared with the critical value at 5% level of significance to determine the number of co-integrating vector(s) in the model. If this test establishes at least one co-integrating vector among the variables under investigation, thus a long run equilibrium relationship exists in the model. All the variables have lags by one-year period. Table 5 states the estimation of equation 2.
The result shows the presence of co-integration vectors that indicate there is an existence of long-run relationships among the indicators of economic growth and the other variables in the study. Furthermore, we test the null hypotheses for equation 2 which is there is no long-run relationship among the variables in 5%. From the probability of 3.02% we have insufficient information to accept the null thus we reject the null hypotheses and accept the alternative hypotheses to conclude there is a long relationship. In the At most 1, the probability is 3.30% thus we reject again the null hypotheses to conclude there is more than one cointegrated equation among the variables. Maximum eigenvalue has the same result to support the test. However, this result concludes that an increase in natural resource wealth activities could have an impact on other sectors of the economy.
Since there is long-run relationship among the variables, Engle and Granger (1987) argue that it is necessary to use the Error Correction Mechanism (ECM model). This is the estimation of equation 3 that has shown the speed of convergence to the equilibrium when there is long-run relationship. This is an evidence of co-integration found in any model. The error correction representation relating to that model may also be found. This indicates all variations within the dependent variables in the model are result of the co-integrating vectors attempting to return to equilibrium and the error correction term that captures these variations. In conjunction to this, error correction models are estimated to obtain the short-run  dynamics. We rewrite equation 3 to reflect the estimated model by the variables.

This paper investigates the link between economic growth and the natural resource wealth, notably agriculture and oil revenue in Nigeria. We try to answer the question which is a resource based growth strategy that leads to a sustained economic growth or the curse of natural resources. This study uses Johanson (1991)’s test to confirm the existence of long-run relationship among the variables with an error correction model (ECM) over the period from 1980 to 2013. While the results indicate the existence of long-run relationship between resource wealth and economic growth, this relation is absent in the short run mainly due to poor institutions represented in the improper management of the Nigerian Government of the country’s natural resources.
The findings highlight an important policy implication that the natural resource based growth strategy might not lead to sustained economic growth. Thus, Nigeria should aim at pursuing industrial growth strategy with a vibrant real sector that would result in the diversification of the economy. Moreover, it is critically imperative for Nigerian government to tackle the issue of wide spread corruption and mismanagement of public funds in over respective areas along sectors of its economy to improve the quality of the country’s institutions.