This study explored the security implications of oil exploration on the social activities in South Lokichar Basin, Turkana County, Kenya. It was motivated by the disagreements between the county government and national government on the exploration, extraction, production and sharing of oil benefits. Oil discovery and revenues fuel ethnic and political tension in any country, result in war and political instability. Nigeria’s Biafran war was due to oil discovery between July 6, 1967 and January 15, 1970. Such tensions are due to unfulfilled expectations of the host communities, corruption, environmental degradation, socio-economic disruptions and exploitation. In a region of extant and prevalent insecurity over scarce resources, there is the likelihood of violent disagreements over ownership and utilization of a newly discovered resource. Using Yamane’s formula, a sample of 382 respondents was drawn; 8,493 were adults from Turkana County. Whereas most studies relating to oil discovery in Kenya have centred on the economic implications; this study filled the gap from the security perspective. Oil exploration had security implications on social activities as confirmed by 70% of the respondents. 65% also confirmed it, while 60% confirmed that oil exploration led to increased insecurity. 65% of the respondents felt that the security measures were insufficient to deal with security threats as a result of oil exploration while 60% of the respondents did not feel entitled to the benefits of oil exploration and production. The study concluded that oil exploration had both positive and negative security implications on socio-economic activities in South Lokichar Basin, Turkana County, Kenya.

The study adopted a cross-sectional survey research design. This research design was best suited to studies aimed at finding out the prevalence of a phenomenon, situation, problem, attitude or issue by taking a cross-section of the population (Kumar, 2014). Kumar (2014) further notes that cross-sectional survey research design is useful in obtaining the overall picture as it stands at the time of the study. The study was conducted in Lokichar Ward in Turkana County Kenya within which recoverable oil resources have been found. Lokichar Basin is within the Lokichar Ward in Turkana South Constituency of Turkana County.  Turkana County is well endowed with natural resources including oil. Notable explored oil wells include Ngamia 1, Ngamia 2, Amosing 1, Ekales 1, Twiga South 1, Agete 1, Etuko 1, Ewoi 1 etc. Of the numerous oil wells, Ngamia 1 Amosing 1 and Ekales 1 have since been found to be economically viable with a projected production of 750 million barrels (Turkana County Government, 2015). A sample size of 382 respondents was selected using Yamane formula on sample size: 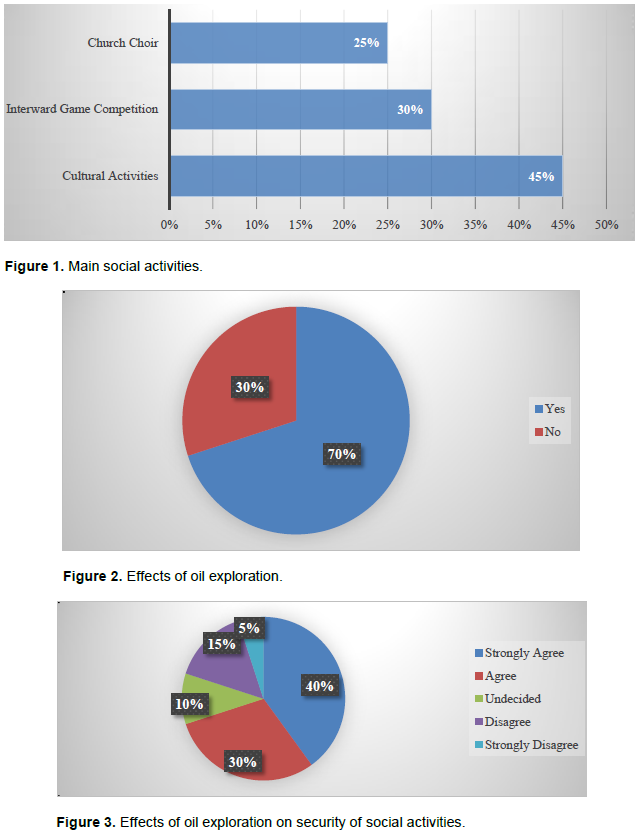 This study intended to investigate the security implications of oil exploration on social activities in south Lokichar basin Turkana county. The study aimed to fill the knowledge gap from the security management perspective given the fact that most studies in the area of oil discovery in Kenya have focused on the economic prospects.
The study found out that oil exploration had effect on social activities in Lokichar and this was represented by 70% of the respondents. Through the explanations offered by the respondents, the researcher came to the realization that the effects were negative affecting cultural sites, family roles setup, health, and human rights in the areas. Where the actual effect had not occurred, the respondents opined that there was a high potential of occurrence. Community elders expressed concern that their traditional cultural practices were particularly in danger due to oil exploration activities. To them, certain sites where particular and significant rituals are conducted are now being allocated to oil exploration companies. Such rituals include Asapan (passage into elderhood), cultural prayers to Akuj (god) during times of crisis or during calamities such as extreme droughts etc and were now threatened since the spaces are being reallocated.
Turkana community is patriarchal with men heading the families. Modernization and income differentiation have seen this social norm steadily changing. Women have taken up leadership roles mostly in politics and they have been employed with decent income. Although it is not explicit, it is implied that they have taken up the roles of guiding the family through making important decisions due to their empowerment. However, a discussion with the community elders indicated that they are not accepting such changes and women are still required to subjugate to men. However, the practice is changing. With oil exploration activities, family roles are bound to changes in certain ways. Firstly, women are bound to get more empowered through employment and thus elevating their social standing. Secondly, divorce rates are likely to increase due to resistance by men to accept such social role changes. Thirdly, single parenthood occasioned by divorces or demises due to STIs/HIV are likely to see majority of women having to raise families singlehandedly. The same could be occasioned  through irresponsible sexual behaviours leading to unwanted pregnancies; a concern bothering the community elders.
Politically, there have been ugly spates of public altercations between the National political leadership and the county political leadership. This was occasioned by disagreements on issues relating to oil revenue sharing. Although the political leaders have since reconciled, the researcher noted that community members were dissatisfied with the terms truce. This is mainly because they view it as a betrayal by leaders who they thought were representing their plight and would fight for the community’s fair share. Most of the community members revealed that such disquiet is likely to lead to recurrence of public disagreements and heightened insecurity in the region.
The Extractive Industries Transparency Initiative (EITI) is a global standard that promotes open and accountable management of natural resources. It has been utilized in mineral rich countries such as the Democratic Republic of Congo, Central African Republic, and Republic of Congo among others. It aims at promoting information sharing and tracking of minerals so as to eliminate illegal exploitation and use of minerals and their proceeds. The annual EITI report will inform the public on how much the extractive industry contributes to the economy, and how the government spends such revenues for the welfare of citizens. EITI’s multi stakeholder approach also provides a platform for discussion of issues relevant to the governance of the extractive sector, thereby increasing civic participation. Aside from producing information on extractive sector revenues, EITI also promotes transparency across the extractive industry value chain, including information on the licensing process, social development programs at the local level, and processes involving indigenous peoples.
EITI aims to ensure transparency across the extractive industry value chain and foster civil society’s meaningful participation in the governance of natural resources. The disclosure of information through the EITI process enables the broader public to evaluate the extractive sector by providing a mechanism by which local communities are able to openly scrutinize the collection and spending of revenues collected by the government from the extraction of natural resources. EITI also enables civil society to assess gaps in existing government systems and provide data – driven recommendations to policy makers.

The national and the county government should take deliberate effort to identify important cultural sites for the community in carrying out their traditional rituals and cultural practices. These should then be mapped and protected under the National Museums and Heritage Act of 2009 (Government of Kenya, 2009). Despite any mineral potential of such areas, they should under no circumstances be appropriated for exploration activities. This will serve to avoid offending the indigenous communities by disrupting their valued cultural practices; an act that can be interpreted as disrespect to the community.
The civil society organizations need to take a proactive role in highlighting instances of human rights abuses by the oil exploration companies, or government agencies. They should take a lead role in advocating for justice and respect for human rights. The CSOs also need to educate the public about their rights so that they are aware whenever exploitation or abuse of those rights occur in the course of oil exploration. This is important in the endeavour to hold oil companies and government machinery to account for and ensure that human rights are upheld
The Kenyan Government needs to adopt and utilize the Extractive Industries Transparency Initiative (EITI). This is a global standard that promotes open and accountable management of natural resources. It seeks to strengthen government and company systems, inform public debate, and enhance trust among stakeholders. The EITI promotes access to information, transparency and accountability in the extractive sector through disclosure and publication of payments made by mining, oil, gas and other extractive companies. In this way the indigenous communities in Kenya can participate in the governance of oil and gas industry.