The study explored the socio-economic determinants of off-farm diversification by land reform beneficiaries in Sanyati District, Mashonaland West Province, Zimbabwe. The major aim of the study was to establish the reasons for off-farm diversification by resettled farmers. It established sustainability of resettled farmers’ livelihoods and investigated farmers’ perceptions of agriculture and land reform policy. Although resettled farmers got access to land, large tracts remain idle, indicating that farmers are engaged in livelihood activities other than farming. A cross sectional research design was employed and the data collection instruments were a questionnaire, focus group discussion, and structured interviews. The study found that land reform beneficiaries were diversifying from agriculture to artisanal gold mining, employment, as well as small business ventures. The research established that the livelihoods of Intensive Resettlement Scheme and Model A1 farmers who did not engage in any form of off-farm activities were not sustainable. The study concluded that off-farm diversification was having a negative impact on agricultural productivity and it recommended that government put in place credit facilities to adequately support farmers for the enduring success of the land reform programme.
Key words: Determinants, land reform, off-farm diversification, Sanyati, sustainable livelihood.

Off-farm diversification refers to a farm household’s attempt to reduce its vulnerability by having more than one livelihood activity (Cain et al. 2004). In a diversified household, if one productive activity does not provide enough or fails completely, there are other sources of livelihood that the household can fall back on (Janvry and Sadoulet,   2002).  However,  a  household’s  capacity  to engage in off-farm activities depends on aspects such as level of education, income, assets, size of household and farm size (Matshe and Young, 2004). The traditional image of farm households particularly the land reform beneficiaries has been that they focus exclusively on farming and do not participate in any other off-farm activities  (Hall,   2000).   The  Zimbabwean  Government embarked on land reform programmes which comprised the Intensive Resettlement Programme of the eighties and then the Fast Track Land Reform between 1997 and 2004.  The objective among others was to economically empower the black majority and so achieve sustainable livelihoods through agriculture (Government of Zimbabwe, 2001). Other objectives were to relieve pressure on the land in the communal areas, encourage better agricultural productivity and thus ensure food security (Government of Zimbabwe, 1981). Through these land reform programmes, resettled farmers got access to land in high potential areas (Rukuni, 2006).  However, this land is not being utilised to its maximum potential as evidenced by continued reliance on donor assistance and support and the exportation of grain from neighbouring South Africa, Zambia and Mozambique (Mandizha, 2014). It is on this basis that the research sought to establish the socio-economic determinants of off farm diversification by resettled farmers in Sanyati District with a view to understanding the implications of policy on the livelihoods of resettled farmers in order to encourage maximum utilisation of land resources.  The beneficiaries’ success in the resettlement areas in terms of agricultural output and livelihood improvement at household level is what this research also seeks to determine. The findings from this study may form a framework to help government in revising the agriculture and land reform policy for the improvement of agricultural productivity and sustainable livelihoods of the land reform beneficiaries. This research will also add on to existing literature on land reform and will provide guidance on land allocations in future land reforms around the world.

Study area
The study was carried out in Sanyati District whose coordinates are 17°57′00″S, 27°18′27″E and is located in Mashonaland West Province (ZNSA, 2013). It spans over 4 832.98 square kilometres, has 18 administrative wards and has a total population of 112 897 (Central Statistics Office (CSO), 2012) as well as a population density of 23.4inh./km2 (ZNSA, 2013).  It has a humid subtropical climate.  The area is in natural region III of Zimbabwe’s agro ecological zone.  It receives moderate mean annual rainfall ranging between 600-700mm per year.  The rainy season is between November and March.  Temperatures range between 28 and 32°C and may experience some severe dry spells and a relatively short growing season. The vegetation is predominantly mopani woodland and the main crops grown in the area are mostly cotton, maize, soya beans, groundnuts and sunflower.  The district is predominantly a cotton producing area although the production of small grains such as sorghum, millet and rapoko, though not so popular is currently being encouraged by the government.  The area is also very rich in gold deposits and the area is characterised by small scale/ artisanal gold mining. Below is a map showing the geographical location of the area under study (Figure 1).
Research design
Considering that data collection involved more than one group, the study employed the cross sectional design. The groups were Intensive Resettlement farmers, Model A1 and Model A2 farmers. This design was employed because it was easier to manage its economy. Triangulation where both qualitative and quantitative approaches are used, offered the prospect of enhanced confidence in the findings. It also captured a more complete, holistic, and contextual portrayal of the three resettlement models. A qualitative approach was relevant to the research as it sought to answer questions  by  examining   various   socio   political   and   economic settings and the individuals who inhabit those settings.  The research attempted to understand human behaviour and institutions by getting to know people’s values emotions and beliefs.  Quantitative data derived from interviews and questionnaires explored the relationship between off- farm activities and land reform.
Target population
The target population consisted of 280 farms in Sanyati District of Mashonaland West that were acquired for resettlement purposes with close to 4000 land reform beneficiaries. There are about 600 Model A2 farmers, 1800 A1 Model farmers and slightly more than 1200 people resettled under the Intensive Resettlement scheme. The strata consisted of Intensive Resettlement farmers, Model A1 and Model A2 farmers in the small and medium scale category for ease of comparison. 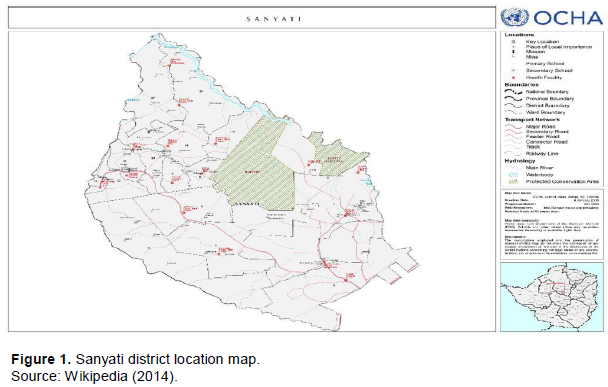 Off-farm activities are an important factor in household  economies and food security as they affect the performance of agriculture (Asmah, 2011). A number of conclusions were arrived at: First the study concluded that depressed producer prices of cotton and the low prices offered for maize by private buyers were the some of the reasons for off-farm diversification.  In addition, delayed payment of maize deliveries to the Grain Marketing Board, the harsh economic environment coupled with the absence of affordable credit for farming were other reasons noted.  Erratic rainfall pattern characterised by long dry spells, due to climate change and variability was another reason that Intensive Resettlement Scheme, Model A1 and Model A2 land reform beneficiaries in Sanyati District were engaged in off-farm activities. The most common off-farm activities were gold mining and small business ventures unrelated to farming as well as formal and informal employment in Kadoma. Artisanal gold mining was the most popular off-farm activity among most the land reform beneficiaries, because it was perceived to be more viable than farming. From the research data and findings, the study concluded that overall off-farm activities have had a negative impact on agricultural productivity, with ripple effects on food security at household level particularly amongst Model A1 and Intensive Resettlement Scheme farmers. It also been observed that off-farm activities have cost agricultural production in terms of time, dedication and commitment.  Crop yields per ha among the Model A1 and A2 resettlement models have been on the decline in the district over the past 3 years, with the exception of Intensive Resettlement Scheme model, which registered a slight growth due to conservation farming.
The research further established that of the majority of the Intensive Resettlement Scheme and Model A1 farmers livelihoods were not sustainable when they relied solely on agriculture.  This is because they were failing to cope, and recover from the shock and stresses of the difficult economic environment.  Most were selling off their assets in order to get by. The off-farm activities they engaged in only generated enough to meet very basic needs.  Most Model A2 farmers’ livelihoods are sustainable since off-farm activities are a livelihood strategy that was cushioning them from the stresses and shocks of the socio economic and natural environment.
From observation, the research concluded that off-farm activities by all resettlement models allowed greater access to income. Increased access to off-farm activities has therefore lead to positive indirect effects on the sustainability of farmer’s livelihoods.

Land reform is incomplete unless there is access to land and a set  of  institutional  reforms  that  would  facilitative agricultural competitiveness of beneficiaries (Adams and Howell, 2001). Based on the findings the study recommends that Government facilitates for offer letters of all resettlement schemes to be used as security or collateral when seeking financial support from banking institutions for investment in farm inputs and infrastructure projects. The repayment intervals should be synchronised with harvesting and marketing and not monthly or otherwise. That way the indigenous Zimbabweans would have been economically empowered through land as a valuable resource.
Given that the study established that most land reform beneficiaries’ major issues were related to unavailability of resources to purchase inputs for crop production, the study recommends that Government subsidise the price of fertilizers and seed to make them affordable. The Government usually assists Model A1 and Intensive Resettlement Scheme farmers through the Presidential Input Scheme, the study recommends that adequate inputs to cover at least an acre should be distributed to the benefiting households.
Moreover there are other crops such as sesame (runinga), black and white-eyed cowpeas that have a ready export market.  These crops are suitable for the climatic and soil conditions in Sanyati and require very little rainfall and inputs.  Free-range chicken farming is also becoming very popular. There is need to inform farmers about these and other options accompanied by relevant training so that farmers adapt to the ever-changing climatic conditions and ensure sustainable livelihoods.