Dynamics of inflation and its impact on economic growth in selected East African Countries: Ethiopia, Sudan and Kenya

Despite Ethiopia's, Sudan's, and Kenya's fastest-growing economies' performance over the last two decades, the overall average inflation rate remains double digits. It subsequently incorporates a detrimental impact to support economic growth in an extended period. This study aims to assess the dynamics of inflation and its impacts on economic growth Ethiopia, Kenya, and Sudan using time-series macroeconomic data collected from the African Development Bank. The research used the Autoregressive Distributed Lag (ARDL) econometrics model and investigated the presence of cointegration and long-term relationships between macroeconomic factors. The result indicates that the exchange rate and the supply of the long-run economic growth rate influence Ethiopia's money supply. Inflation rates and foreign direct investments have impacted economic growth rates in Kenya and Sudan. The economic growth rate in all counties is generally influenced by both the availability of money and the exchange rate—also, real per capita GDP affecting the economic growth rate of Sudan and Ethiopia. Policies on introducing new technologies, building capacities in public and private sectors, youth and gender parity, mobilizing domestic resources, and public participation are recommended for Ethiopia, Kenya, and Sudan.

The economic growth results from fiscal, monetary, and various other economic policies recommended by policymakers. Several factors affect economic growth. Indeed, inflation and economic growth relationship are complicated. The sophistication of the link has been explored in many studies. Earlier empirical research showed a negative relationship between inflation and economic growth. On the contrary, analyses focusing on developing countries' sample found a positive relationship between inflation and economic growth. The relationships involving inflation and economic growth have been studied substantially. Nevertheless, the specific connection is not very well defined (Stephanie, 2012).
Considering the East African countries, it is quite relevant to wisely look at the relationship over the years to ensure that inflation does not affect economic growth. During the past in Ethiopia, inflation has been maintained at a lower rate because the authorities controlled the price. The Government was providing products at a set price towards the public. Even more, the lower exchange rate also has a lower inflation rate. Likewise, the inflation level has been reduced in the earlier years of the present Government (Sisay, 2008; World Bank, 2016). However, recently, inflation continues to be high in Ethiopia. Inflation increase in Ethiopia averaged 18.69% from 2006 until 2015, reaching the highest all-time, a lot of 64.20% in 2008, and a record low of -4.10% in 2009 (CSA, 2020).
From 1999 to 2011, Sudan had a time in Sudan where it advanced from widespread natural resources discoveries via oil. Economic growth surpassed the historical average of 4.9 during the "oil economy," and 6.1% on average per year. Sudan lost nearly 75% of its returns and much of its prime economic activity due to South Sudan's secession in 2011, growth for 2014 was 3.1% and indicated some continuation of recovery; however, growth was 3.1% in 2015 (World Bank, 2015).
From 1995 to 2010, the overall economy's growth rate did not display a steady or perhaps regular Kenya pattern. In 1995 and 1996, the real GDP growth rate was 4.3 and 4.0%, respectively. Nevertheless, in 1997, the growth rate decreased considerably to a depressing level of 0.2%. The growth rate rose to 4.6 and 7.0% in 2004 and 2007, correspondingly (AfDB, 2018).
Motivated by Fischer's pioneering work, several studies have found proof of non-linearities inside the inflation-growth nexus using different estimation methods. Alternatively, Ahmed (2010) claims approximately that panel data approaches are superior in recording the inflation-growth relationship than country-specific investigations. Current investigation reveals blended pieces of evidence on the level of inflation restrain achieved by distinctive ponders, just like Ahmed (2010), Stephanie (2012), and Ibarra and Trupkin (2016) investigations. The variations in the calculation methods used can easily explain the inflation resistance figures. Indeed, different tests use different estimation techniques: Bick (2007) uses non-dynamic regression of the panel limit, and Ibarra and Trupkin (2016) uses regression of the smooth shift panel. Stephanie (2012) does, however, include dynamic plank threshold regression. When analyzing non-linearities in the inflation- growth nexus, the option of an excellent estimation technique plays an important role. Ahmed (2010) and Bick (2007) all provide actual income within the growth equation among all the control variables but use tools and methods that do not question responding to the endogeneity problem. The integrated analysis that tells the inflation threshold's truth may also depend on the countries' sample. Study of developing countries in Africa, South America and Asia, as per Ahmed (2010), Bick (2007), Stephanie (2012) and Ibarra and Trupkin (2016), showed varying levels of economic development. According to Moshiri (2004), this could lead to a bias in the inflation threshold idea. Furthermore, in all developing countries, it is inappropriate" to set a single policy target.
Various researchers attempted to investigate the relationship between inflation and economic growth in Ethiopia, Kenya, and Sudan using different econometrics approaches. Still, there is a lack of comparative studies that compare the dynamics of inflation and its effect on economic growth between Ethiopia, Kenya, and Sudan, which showed the highest inflation rates in the East African Region. Conducting a comparative study helps to understand the differences and similarities, as well as share experiences and what macroeconomic policies can be used for in the three countries by assessing inflation dynamics and economic growth effects.

Data types and sources
The analysis relies primarily on secondary time series data from the African Development Bank (AfDB) socio-economic database for Ethiopia, Kenya and Sudan. Economic growth will be used as a dependent variable, though inflation, FDI, exchange rate, growth rate of money supply growth, and real per capita GDP variables are explanatory variables. To summarize and present the data, various statistical techniques were used. In Ethiopia, Kenya, and Sudan, the econometric method of ARDL is then used to verify the relationship and impact.
Data analysis
The study used descriptive and econometric analysis. In this study, we used standard time series equation of the form: 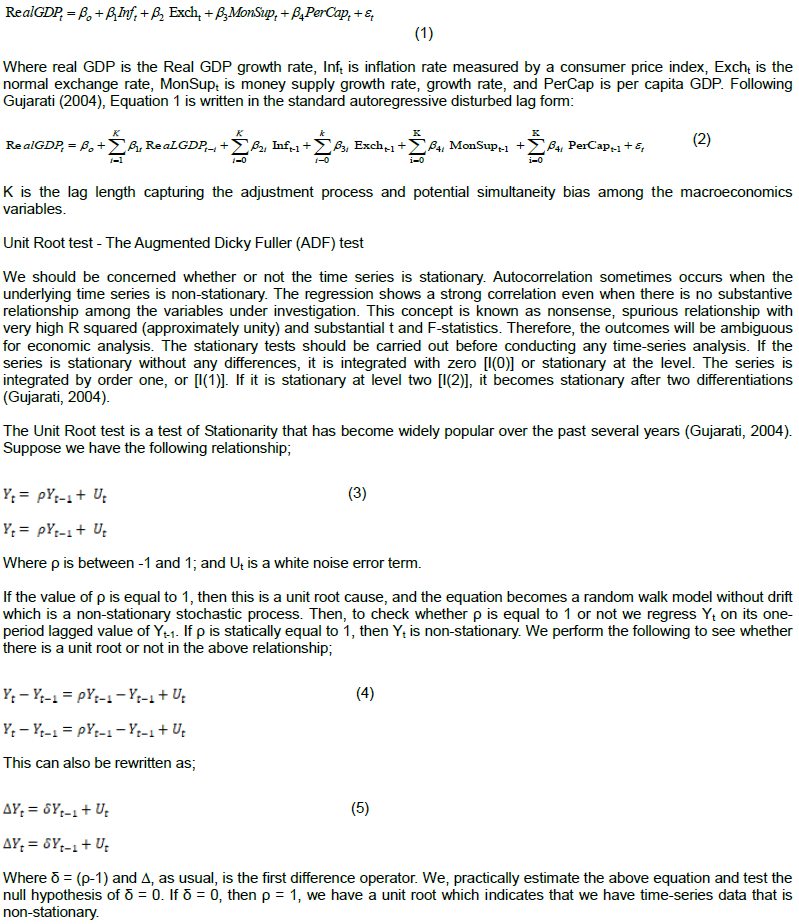 The F-test hypothesis is denoted as:
H0: β1 = β2= 0 (null, that is, the long run relationship does not exist).
H1: β1 ≠ β2 ≠ 0 (Alternative, that is, the long-run relationship exists).
This is tested in each of the models as specified by the number of variables.
The ARDL bound testing is performed on the Wald test (F-statistic). The Wald-Test's asymptotic distribution is non-standard under the null hypothesis that there is no cointegration between the variables. The smaller value bound implies that all variables are I(0), indicating no cointegration relationship between the variables studied. The upper bound implies that all variables are I (1), which means cointegration between variables. If the calculated F-statistic is higher than the critical value, the H0 is rejected (the variables are cointegrated).  When the F-statistic test is less than the lower bound critical value, the H0 cannot be rejected (no cointegration among the variables). Suppose the computed F-statistics falls between both the minimum and maximum values, in that case, the results are unsatisfactory, and we need to verify the stationarity error term. Depending on the outcomes of the ARDL bounds test, we use either the Error Correction Model (ECM) in the event of a long-term relationship or the short-term ARDL model in the event of no cointegration.
Long run representation of the ARDL model
The long-run representation of the ARDL model specified using Gujarati (2004) and Johansen and Juselius (1990).OLS will help estimate this long-run model if the F-statistic exceeds the upper bound critical value, and the long-run relationship is confirmed.

In this study, despite promising macroeconomic performance in Ethiopia, Kenya, and Sudan countries, inflation in Sudan spiraled out of control starting from 2016 onwards while there is slow growth rate in Kenya and Sudan. The main driver of long-run economic growth in Ethiopia is the exchange rate and money supply. In Kenya and Sudan, inflation, FDI, exchange rate, money supply growth rate commonly affected the economic growth rate. In addition, real per capita GDP affected the economic growth rate of Sudan. Based on the findings, the study recommended the following policy responses. First, the central banks must apply an appropriate macro-economic policy instrument to maintain low and stable inflation and exchange rate. Second, the Government should continue the strictly fiscal management to enable the monetary policy instrument to sustain economic growth and strengthen poverty reduction programs. Third, promoting and sustaining FDI inflow via creating and providing adequate policy subsidies. Finally, money supply and growth rate is dramatically improving and is adversely influenced by the performance of macro-economic variables. Hence, there is a need to take into account nature and the effects. In addition, the three countries need to develop policies that benefit from the regional, continental and international commitments such as the Global Agenda for the sustainable development goals and the African Union Agenda 2063 that will help them explore the means and ways of mobilizing the domestic resources to contribute to the economy.