Emergence of antimicrobial resistance is a major public health problem worldwide, particularly in developing countries. The effectiveness of currently available antibiotics is decreasing as a result of increasing resistant strains among clinical isolates. The aim of this study was to determine the antimicrobial resistance pattern of bacterial isolate from different clinical specimens at Hawassa University Referral Hospital. A retrospective data (from January 2012 to December 2014) of patients registered at microbiology record book were reviewed. Age, sex, type of clinical specimen, type of bacterial isolate and antimicrobial resistance pattern were extracted using data extraction format. Data were analyzed using SPSS version 16 software. A total of 143 bacterial isolates were collected from clinical specimens such as: urine (63; 44%), ear discharge (26; 18.2%), pus (25; 17.5%), stool (12; 8.4%), nasal swab (12; 8.4%), genital swab (3; 2.1%) and cerebrospinal fluid (2; 1.4%). The predominant bacterial isolates were E. coli (35; 24.5%) followed by S. aureus (31; 21.7%) and Klebsiella species (21; 14.7%). Greater than half percent of resistance were observed for ampicilin, cotrimoxazole, penicillin G, chloramphenicol, gentamicin, norfloxacin and oxacilin. Moreover, MDR was observed in 127 (88.8%) of the isolates. High prevalence of multi-drug resistant bacteria was observed in this study. Therefore, resistance surveillance studies should be conducted to develop local antibiogram data, for choosing the best antimicrobial therapy.

Antimicrobial resistance (AMR) is a global concern, particularly pressing in developing nations where the infectious diseases, poverty and malnutrition are endemic (Okeke et al., 2005; DACA, 2009; Moges et al., 2014; Planta, 2007). Infections caused by resistant bacteria have been shown to be more frequently associated with increased morbidity and mortality than those caused by susceptible pathogen Helms et al., 2002; Travers and Barza, 2002). In areas of concentrated use, such as hospitals, antimicrobial resistance to led to hospital stays,increased health care costs and in extreme cases untreatable infections (Byarugaba, 2004).
The lack of clinical microbiology laboratories to identify the specific etiologic agents and their antimicrobial susceptibility testing has increased empirical therapy which in turn leads to emergence of AMR. Moreover, self-antibiotic prescription, lack of access to local antibiogram data and poor awareness of prescriber about AMR were the leading local factors for AMR development in Ethiopia (Abera et al., 2014).
Studies have showed that besides the temporal changes in profile of infecting microorganisms and pattern of resistance over time, antimicrobial resistance profile of bacteria varies among population because of difference in geography, local antimicrobial prescribing practices and prevalence of resistant bacterial strains (Abejew and Denboba, 2014; Alemu et al., 2012; Kabew et al., 2013; Tadesse et al., 2014). Such differences are never stable and may change rapidly especially in places where misuse of antibiotics are common particularly in developing countries(13). A systematic review in Ethiopia has also indicated a trend towards an increasing resistance rates among pathogens such as Escherichia coli, Shigella spp, Salmonella spp and Staphylococcus aureus to commonly prescribed antibiotics, including ampicillin, amoxicillin, penicillin, tetracycline and trimethoprim/sulfamethoxazole (Moges et al., 2014). Thus, up to date information on microbial resistance is needed at local level to guide the rational use of the existing antimicrobials. Therefore, the aim of this study was to determine the antimicrobial resistance patterns of bacterial isolate from different clinical specimens at Hawassa University Referral Hospital Southern Ethiopia. 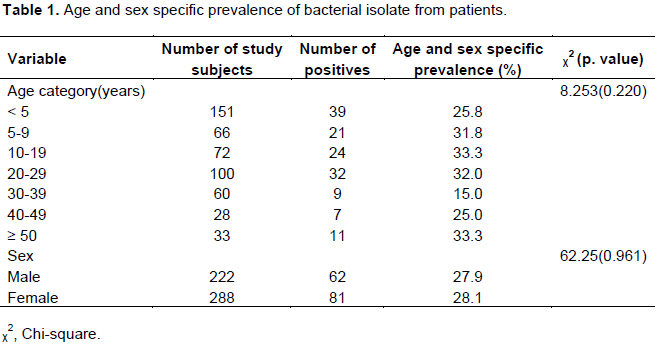 Types of clinical specimen processed
The most frequently processed specimens in the hospital microbiology laboratory were urine 226 (44.3%) followed by stool 170 (33.3%). The rate of culture-positivity was found to be 80.6% in pus, 72.2% in ear discharge and63.2% in nasal swab (Figure 1). 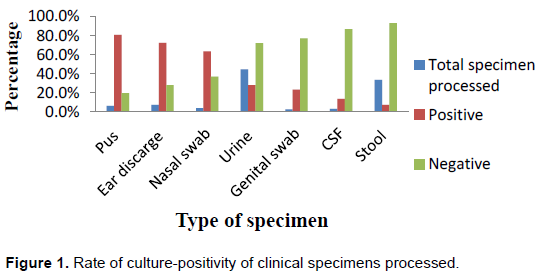 Bacterial isolates
In this study, a total of 143 bacterial isolates were collected from various clinical specimens. Of these, Gram negative bacteria accounted for 97(67.8%) and the rest 46(32.2%) were Gram positive bacteria. The most common bacteria isolated were E. coli 35 (24.5%), S. aureus 31 (21.7%) and Klebsiella species 21 (14.7%). The least were Enterococcus species and Neisseria gonorrhoeae which accounted 3 (2.1%). The majority of bacteria were isolated from urine (44%) followed by ear discharge (18.2%) and pus (17.5%). The predominant isolate from urine was E. coli (42.9%) followed by Klebsiella spp. (12.7%) and S. aureus (12.7%), while the most common isolate from ear discharge and pus was S. aureus(42.3% and 40% respectively). Shigella spp. and Salmonella spp. was the only pathogen isolated from stool specimen (58.3 and 41.7% respectively), while Klebsiella spp. Was common isolate from nasal swab (58.3%). N. gonorrhoeae and E. coli was the only organism isolated from genital swab and CSF respectively (Table 2). 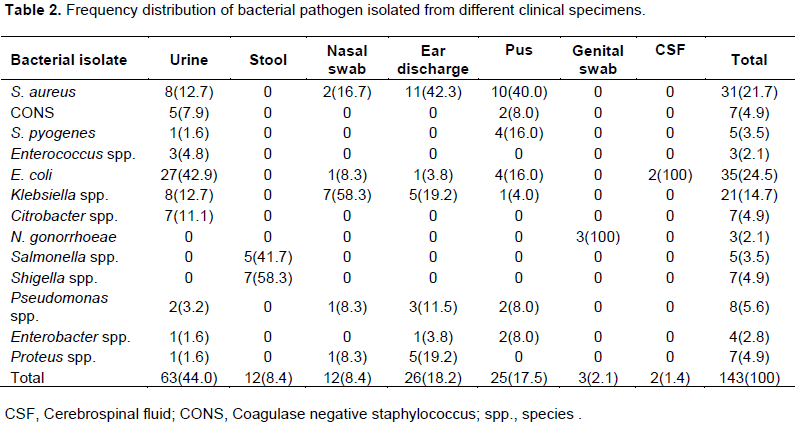 Antimicrobial resistance pattern
The overall resistant rate to ampicillin, cotrimoxazole and penicillin G, chloramphenicol, gentamicin,  norfloxacin and oxacilin were 99.1%, 82.2%, 73%, 64.8%, 54.3% and 50%, respectively. On the other hand, amoxicillin-clavulinic acid, ciprofloxacin and ceftriaxone had overall lower resistance rate of 32, 43.1 and 47.6%, respectively (Table 3). 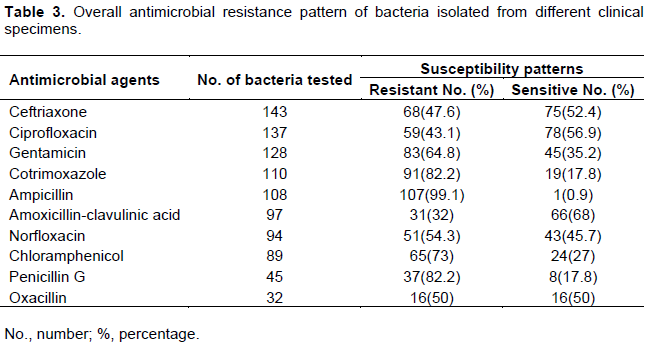 Antimicrobial resistance pattern of Gram positive bacteria
Antimicrobial resistance rate of Gram positive bacteria is shown in Table 5. S. aureus was the predominant Gram-positive isolate resistant to ampicilin (100%), penicillin (96.3%), cotrimoxazole (73.7%), chloraphenicol (56.5%), gentamicin (52%) and oxacilin (47.6%). Although, small number of Enterococcus spp. was isolated from urine sample, all of them were resistant to almost all of the antibiotics tested except for ciprofloxacin (33.3%) and amoxacillin- clavunlic acid (66.7%). 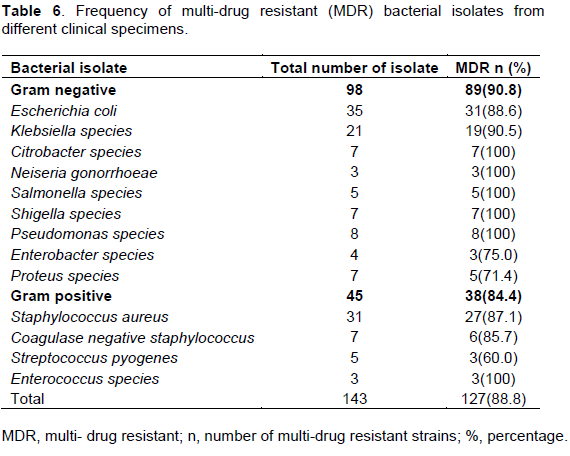 Increased in antimicrobial resistance has made it necessary for the generation of an up to date information on antibiotic resistance patterns of bacterial isolate in order  to determine appropriate empirical therapy. In this study a total of 143 (28%) bacterial isolates were collected from various clinical specimens. The most common specimens processed in the hospital laboratory were urine followed by stool. Majority of the bacterial isolates were recovered from urine specimen. The most common bacteria isolated were E. coli, S. aureus and Klebsiella spp. MDR was observed in 127 (88.8%) of the isolated bacteria.
Although, the most commonly processed specimens in the laboratory were urine and stool; culture positivity rate of stool specimen were very low as compared to other specimens processed in the laboratory. This might be due to high number of patients (44.7%) who delivered stool were children less than five years old (data not shown) in which the predominant cause of diarrhea is virus. Moreover due to lack of facility diarrhea associated-E. coli strain and Campylobacter spp. were not isolated.
Overall, the most common isolates observed in this study were E. coli followed by S. aureus and Klebsiella spp. Similar findings were observed in another studies(17,18). The distribution and frequency of bacteria isolated in different clinical specimens were different. In urine the predominant bacterial isolates were E. coli followed by Klebsiella spp., S. aureus, Citrobacter spp. and CONS.
The isolation rate of E. coli in this study is in conformity with previous studies conducted in Gondar North-West (47.5%) (Alemu et al., 2012), Addis Ababa central (44.62%) (Kabew et al., 2013) and Dessie North-East (45.5%) (Alemu et al., 2012; Kabew et al., 2013; Kibret and Abera, 2011). However, the rate is generally lower than another two studies conducted in North-East Ethiopia(60.29% -63.6%) Abejew and Denboba, 2014; Kibret, 2014). This difference might be explained by difference in geographic area and time especially in North-east Ethiopia which indicates an increase in prevalence through time.
In this study the second most frequently processed specimen was stool. In stool sample, Shigella spp. and Salmomella spp. were the only pathogen isolated in line with study conducted in Ethiopia (Reda et al., 2011). In ear discharge the most commonly isolated bacteria were S. aureus followed by Proteus spp., Klebsiella spp. and Pseudomonas spp. This is concordant with the previous studies in Mekelle University, Northern Ethiopia (Gebereyesus and Zemene, 2015). However,  in  another studies the predominant isolates were Proteus spp. Muluye et al., 2013; Abera and Kibret, 2011) and Pseudomonas spp. (Alsaimary et al., 2010). Similarly, in pus/wound/tissue specimen the predominant isolates were S. aureus in agreement with other studies in different part of Ethiopia (Esayas et al., 2014; Muluye et al., 2014; Mulu et al., 2012). In general Gram negative bacteria were the most commonly isolated than Gram positive bacteria and this finding is in agreement with the findings reported in Gondar Alemu et al., 2012; Muluye et al., 2013). The difference in the pattern and rate of bacterial isolate among different clinical specimens might be due to difference in study subjects, study design, identification method, geographic variation and variation overtime within a study population.
With regard to the antimicrobial resistance pattern of isolates, E coli were found to be most resistant (>90%) to ampicilin and cotrimoxazole. This finding is in agreement with recent study conducted in Dessie North-East Ethiopia (Abejew and Denboba, 2014). However higher resistance (56.2–68.8%) to ciprofloxacin, gentamicin, chloramphenicol and norfloxacin were seen in this study than other studies conducted in Ethiopia (Abejew and Denboba, 2014; Alemu et al., 2012; Muluye et al., 2013).  High resistance rate (71.4-100%) was seen by Klebsiella spp. to gentamicin, chloramphenicol, cotrimoxazole and ampicillin similar results were reported in Jimma University Specialized Hospital, South-West Ethiopia (Mama et al., 2014). The isolated S. aureus were100% resistant to ampicilin and 96.3% to penicillin G. This finding is comparable with 82.2% resistance rate for both antibiotics reported in Debre Markos, Ethiopia(30). In this study 47.6% of tested S. aureus was resistant to oxacillin and hence defined as methicillin resistant Staphylococcus aureus (MRSA)isolates comparable with study conducted in Debre Markose (49.7%) (Kahsay et al., 2014). However high resistance rate to ceftriaxone and amoxicillin clavunilic acid (Esayas et al., 2014); gentamicin and cotrimoxazole (30) was reported in Ethiopia. Possible reason for the disparity in drug resistance at different sites could attributed to the differences in the rational use of antibiotics in the study areas.
Furthermore multi-drug resistance was seen in 90.8% of Gram negative and 84.4% of the Gram positive isolates with the overall MDR of 88.8%, which is consistent with studies conducted in Ethiopia in urinary tract infection (UTI) patients (93.1%) (Biadglegne and Abera, 2009), diarrheal patients (81.5%) (Huruy et al., 2008), ear infection (94.1%) (Muluye et al., 2013) and wound infection (82.92%) (Esayas et al., 2014). However, lower rate of MDR were reported in other studies from different clinical specimens Sabir and Alvi, 2013; Gebereyesus and Zemene, 2015; Abera and Kibret, 2011). The difference in resistance might be due to the difference in operational definition on MDR or the type of study   subjects.   Nevertheless,   this   study   has   some limitations in light of which results need be interpreted. First, as the nature of the study the result may not represent the general population live in the study area. Second, there was no data on residence, admission history and type of specimen processed such as blood culture, sputum and ocular specimen. In addition, because of their discontinued use the pathogens resistance pattern to vancomycin, cloxacilin and amoxacillin were not analyzed to avoid imprecision in interpretations. With all limitation mentioned above the result of this study has very important input to the study area and microbiological setups in different laboratories.

A total of 143 bacterial isolates were collected from clinical specimens and the majority were isolated from urine 63(44%). The predominant bacteria such as E. coli, S. aureus and Klebsiella spp. have showed high level of antibiotics resistance to the commonly prescribed antibiotics, including ampicilin, cotrimoxazole, chloraphenicol, gentamicin, penicillin G and oxacillin. High rates of MDR bacteria were also isolated. Therefore, resistance surveillance studies should be conducted to develop local antibiogram data, for choosing the best antimicrobial therapy.