Multidrug-resistant tuberculosis (MDR-TB) is a big challenge to the tuberculosis control programmes worldwide. The aim of this work is to determine the rate of MDR-TB in HIV-negative patients with signs and symptoms of pulmonary tuberculosis in Lagos State. 891 adult HIV-negative patients enrolled for the study and tested for acid-fast bacilli by culture; resistance to first-line anti-tuberculosis drugs was performed (isoniazid – 0.2 µg/ml, rifampicin – 40 µg/ml, and ethambutol – 2 µg/ml) by culture method on Lowenstein Jensen (LJ) medium using proportion method. Of the 819 HIV-negative patients, 47.7% were positive for acid-fast bacilli by culture, and 78% of the culture positive were found to be Mycobacterium tuberculosis complex (MTBC). DST analysis on MTBC isolates showed that resistance to only one drug was found in forty-two (13.5%) patients, dual resistance in eighty-seven (28.3%) patients while triple resistance in 45 (14.6%). A total of 117 (38%) MDR-TB cases were recorded in this study. Sex, age, tuberculosis contact, smoking and alcohol consumption were not significantly associated with MDR-TB, P>0.05. However, previous history of tuberculosis was significantly associated with MDR-TB, P = 0.000. This study concluded that there was high MDR-TB rate (38%) among HIV-negative patients and MDR-TB is associated with previous history of tuberculosis. The findings emphasize the importance of continuing the systematic surveillance of drug resistance for prompt diagnosis and iniatiation of treatment.

Multidrug-resistant tuberculosis (MDR-TB), defined as Mycobacterium tuberculosis that is resistant to isoniazid and  rifampicin, has become  a   great  challenge to tuberculosis (TB) control programmes (Gehre et al., 2016). Nearly 1.5 million people are living with MDR-TB worldwide (O’Donnell et al., 2016).  In 2016 alone, the World Health Organization (WHO) estimated 490,000 new cases of MDR-TB and the same WHO global report 2016 revealed that about 93,000 cases of MDR-TB occurred in the WHO African region, with Nigeria having 20,000 of these cases (Adebisi et al., 2019). Also, in 2016, the incidence of MDR-TB/RR-TB in Nigeria was 11/100,000 population (Adejumo et al., 2020a).
MDR-TB is associated with human immunodeficiency virus (HIV) infection and clinically HIV worsens TB (O’Donnell et al., 2016). Although HIV patients are at a higher risk of developing MDR-TB than HIV-negative patient, the global TB report in 2016 had revealed that 490,000 new cases of MDR-TB occurred in HIV-negative patients (Ogbo et al., 2018). Furthermore, the WHO Global Tuberculosis Report 2017 and Global Burden of Diseases, Injuries and Risk Factors (GBD) study 2016 reported 6.3 million and 9.0 million new cases of TB among HIV-negative people respectively (Ogbo et al., 2018). These reports highlighted the considerable burden of TB in HIV–negative people.
An increase of TB and MDR-TB in HIV-negative patients could be attributed to several factors. This could be as a result of poor response to treatment and this draws attention to the need for a prompt response and close monitoring of patient during treatment or the abuse of drugs used for TB in treating other infectious diseases. Furthermore, it could be as a result of periodic visits to clinical settings or from mixing of patients who have MDR-TB. However, previous history of TB therapy is the strongest risk factor for development of MDR-TB and this is partly due to acquired drug resistance. Acquired resistance usually reflects inadequate TB treatment (that is when patients fail to adhere to proper treatment regimens, wrong drugs are prescribed, irregular drug supplies or use of substandard drug) (Fadeyi et al., 2017). Other risk factors include alcohol consumption, smoking, drug addiction, drug side effects, homelessness and treatment failure (Mulu et al., 2015).
Despite the fact that various TB control strategies have been implemented in Nigeria, Nigeria is listed among the 30 high burden countries for MDR-TB with a prevalence of 4.3 and 25% in new and previously treated TB patients respectively  in 2016 (WHO Report, 2017). These could be lower than the real number of MDR-TB patients in Nigeria. Although, a systematic review in 2017 on the prevalence of drug-resistant TB in Nigeria reported an increase in the rate of MDR-TB (Onyedum et al., 2017). The case detection rate in the country is one of the lowest worldwide at 16% (Adejumo et al., 2020b). The WHO recommends baseline resistance testing for all HIV positive patients with active TB prior to initiating treatment; thus, more attention is devoted to studying the burden among them while  HIV  negative  population  that constitutes the bulk of TB cases was relegated to the background. Ideally, before commencement of treatment in all patients with TB, routine DST should be performed but this is not attainable in most high burden countries because facilities for culture and DST are not readily available. Therefore, in high burden settings like Nigeria, there is need to perform routine baseline resistance testing for all patients with active TB. Thus, this study has been designed to determine the rate of MDR-TB among HIV-negative individual with signs and symptoms of active pulmonary TB as well as possible risk factors of MDR-TB.

Study setting
This study was carried out at two DOTS clinics in Lagos State: The Nigerian Institute of Medical Research (NIMR), Yaba and Infectious Disease Hospital (IDH), Yaba. Lagos State is one of the most populous states in Nigeria occupying about 3577.28 km2 with a projected population of 24 821 418 in 2017 (Adejumo et al., 2020a). Lagos thus has a small landmass with very high population resulting in huge overcrowding in homes, public places and transportation. In 2016, Lagos State contributed nearly 17% of all DR-TB cases diagnosed in the country (Adejumo et al., 2020a). NIMR is a tertiary health institution and serves as a referral site for diagnosis and treatment monitoring of patients with complicated TB cases. IDH which is also called Mainland hospital is a secondary referral hospital for treatment of infectious diseases like TB, MDR-TB and HIV.
Study design and population
This is a prospective study of 819 adult presumptive TB cases with signs and symptoms of pulmonary tuberculosis who were HIV-negative. In the study, only patients that gave written informed consent were enrolled while patients with unknown HIV status who refused to perform HIV testing were excluded from the study.
Definition of terms
(i) New case: Newly diagnosed TB patients that have not received TB treatment or received TB treatment for <1 month.
(ii) Previously treated TB case: TB patients that have received TB treatment for >1 month (returned after default, relapses, or treatment failure) (Sanchez-Padill et al., 2012).
(iii) MDR-TB case: Patients whose Mycobacterium tuberculosis in sputum culture is resistant to both isoniazid and rifampicin.
Sample collection
Two consecutive sputum samples (spot and early morning) were collected from the patients in sterile wide-capped container from July 2015 to April 2016. Prior to sputum collection, patients’ information (such as age, sex, HIV status etc.) and treatment history were obtained using a well-structured questionnaire. After sample collection, all samples were transported to the laboratory at 4 to 8°C within 24 h of collection.
Laboratory procedures
The laboratory procedures were performed at the National TB Reference Laboratory – Centre for Tuberculosis Research (CTBR), Nigerian Institute of Medical Research (NIMR) Lagos.
Culture
Laboratory diagnosis of TB was done by solid culture. Sputum samples were decontaminated with NALC-NaOH and concentrated by centrifugation at 3000G force for 15 min. Sediments were re-suspended in 2ml phosphate buffer (pH 6.4) and about 2-3 drops of the sediment was inoculated unto slopes of Lowenstein Jensen medium. The inoculated LJ slopes were incubated at 370C and examined on the third day for contamination and weekly for up to 8 weeks for growth of mycobacteria. All slopes not showing any growth within this period were discarded and recorded as culture negative. For slopes with growths, smear of colonies were made, stained by Ziehl Neelsen (ZN) technique and examined for the presence of Acid-fast bacilli (AFB). Isolates that were acid-fast bacilli were confirmed as positive.
Identification of culture Isolates
Isolates that were positive for AFB were further identified as M.  tuberculosis complex (MTBC) using SD Bioline MPT 64 Ag TB rapid identification test kit and para-nitrobenzoic acid (PNB) test. MTBC identification was based on positive TB Ag MPT 64 test and no growth on LJM containing PNB.
Phenotypic drug susceptibility testing (DST)
All isolates showing positive for MTBC were sub-cultured on fresh LJM. DST were performed on LJM by the proportion method on the following first-line anti-TB drugs – isoniazid (0.2ðœ‡g/ml), rifampicin (40 µg/ml), and ethambutol (2 µg/ml) (Kent and Kubica, 1985). Bacterial suspensions were inoculated by concentrations (104 and 102) into drug-free and drug-containing slopes respectively. Susceptibility or resistance was recorded when the proportion of bacteria in drug-containing medium to that of drug-free medium is <1or≥1, respectively.
Statistical analysis
Data generated from the study were entered and analyzed using the Statistical Package for Social Sciences (SPSS) IBM for windows version 26.0. Frequencies were calculated as percentages. Comparison of categorical variables and significance testing was made with Chi-square test. Value of P < 0.05 was considered statistically significant.
Ethical approval
Ethical approval for the study was obtained from Institutional Review Board, Nigerian Institute of Medical Research, Lagos. Permission to carry out the study was granted by the management of the DOTS clinics. Consent was obtained from each participant, and the participants’ confidentiality was maintained throughout the study (Figure 1). 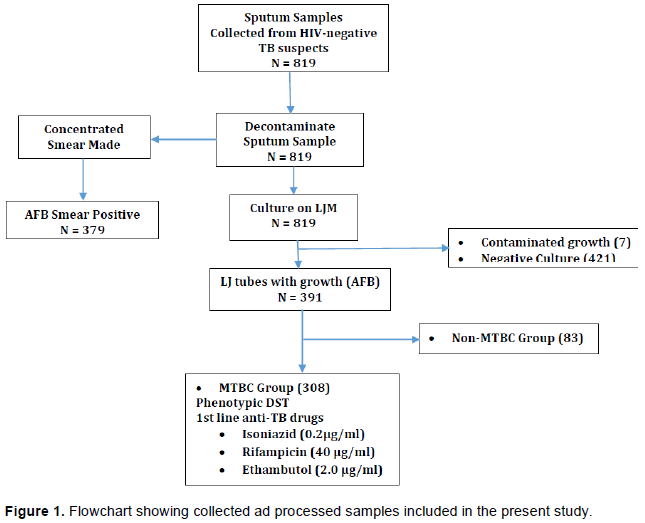 A total of 819 HIV negative subjects were recruited from the two DOTS clinics. More than sixty percent of the cases were males 496 (60.6%) and between the age group of 15 – 55 years with a mean of 34.2± 6.4 years. Majority 480 (58.5%) were new TB cases while most of the participants had received some level of education; 794 (97%) and 409 (49.9%) were married. Among the participants, trading was the highest occupation as shown in Table 1.
The phenotypic DST was performed on three hundred and eight patients (308) as shown in Table 2. Mono-resistance (resistance to one drug only) was found in 42 (13.6%) patients; Mycobacterium tuberculosis (MTB) culture consists of 6 (1.9%) in isoniazid, 34 (11%) in rifampicin and 2 (0.6%) in ethambutol. Dual drug resistance to isoniazid and rifampicin (MDR-TB), isoniazid and ethambutol, and rifampicin and ethambutol were found in 72 (23.4%), 13 (4.3%) and 2 (0.6%) patients samples, respectively. Forty-five (14.6%) patients MTB cultures were found to be resistant to the three drugs of isoniazid, rifampicin and ethambutol tested (MDR-TB). A greater number of MDR-TB samples were observed at Infectious Disease Hospital (81) than at Nigerian Institute of Medical Research (36), P = 0.092.
A total of 117 (38%) MDR-TB cases were recorded in the study consisting of 72 (23.4%) of dual resistance of isoniazid and rifampicin, and 45 (14.6%) of triple resistance of isoniazid, rifampicin and ethambutol. Although the proportion of males among the MDR-TB cases 79 (67.5%) was lower than the proportion of non-MDR-TB cases 131 (68.6%), the difference was not statistically significant (P = 0.846) (Table 3). The number of cases less than 35 years with MDR-TB diagnosis was less than the number among those without MDR-TB. However, the difference was not statistically significant, P = 0.271. The proportion of previous tuberculosis cases among the MDR-TB cases 76 (65.0%) was significantly higher than the proportion of previous tuberculosis cases 68 (35.6%) among the non-MDR-TB cases (P = 0.000). The percentage of MDR-TB cases that had tuberculosis contact was lower than in non-MDR-TB (17.9%) (P = 0.607). Smoking and alcohol intake were also lower among MDR-TB cases compared to non-MDR-TB cases (8.5 and 43.6%, respectively) (Table 3).

Our study concluded that there was high MDR-TB rate (38%) among HIV-negative patients and MDR-TB is associated with previous history of tuberculosis. The findings emphasize the importance of continuing the systematic surveillance of drug resistance for prompt diagnosis and iniatiation of treatment. There is therefore the need for the National Tuberculosis Control Program to increase the use of commercial rapid DNA-based kits, the Genotype MTBDRplus (Hain Lifescience, Germany) for routine testing of sputum samples from all patients with symptoms suggestive of TB.

The authors are grateful to the patients who participated in the study and also, thank the clinical and laboratory staff of NIMR and IDH. We especially thank Mr. Aje T., Ms. Nureni AR and Mr. Igwubor FO.