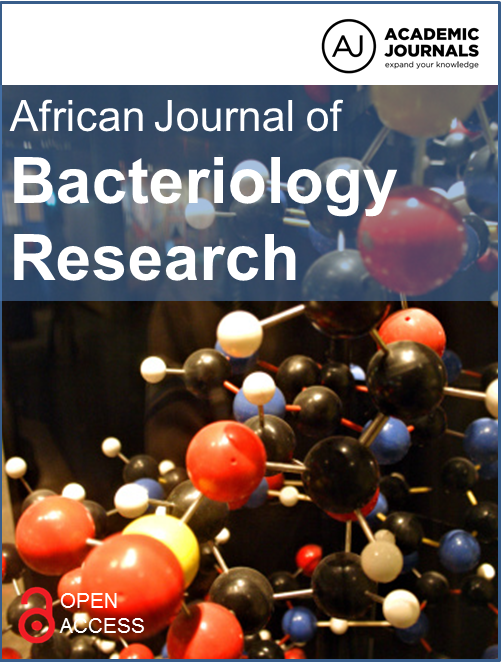 Cultivation of transformed roots
Sections of carrot roots were provided as the potential donor explants for Ri T-DNA mediated transformation with A. rhizogenes strain MTCC-532 in YMB medium.  YMB medium was selected out of the LB medium, nutrient medium and YEP medium based on the optical density at 600 nm. Among different media YMB medium was got 0.739 as highest optical density within 24 h of incubation in dark at 28±2˚C and 150 rpm. Among Tomato (40% of hypocotyles), Amarathus (10% of hypocotyles), carrot (70% of root slices), Potato (40% of potato discs), Sweet potato (30% of discs) and soybean (40% of cotyledons), carrots were transformed easily and shown maximum percentage of transformation. After 7 days of inoculation, successful transformation was shown by the maximum callus formation at cambial regions and direct emergence of roots from endodermal sites. 70% of root slices were shown the callus formation by placing the basal sides of the slices in upright position on the MS medium. Some of the carrot root discs were rotten and became brown due to over growth of A. rhizogenes. The full-fledged transformed roots were mostly emerged from endodermal regions of the carrot sections after 3 to 4 weeks period (Figure 1A). With the exposure of cambium in carrot root discs, the hairy root initiation made easy to generate healthy hairy roots. The vigorously grown thicker roots with more lateral roots, greater than 5 cm size were cut off and transferred to MS medium with 3% sugar and specific antibiotics to get bacterial free roots. Carbenicillin and cefotoxime were successfully found to control the Agrobacterium growth in transformed hairy roots. These Agrobacterium-free roots were vigorously grown in hormone free medium with negative geotropism (Figure 1B). 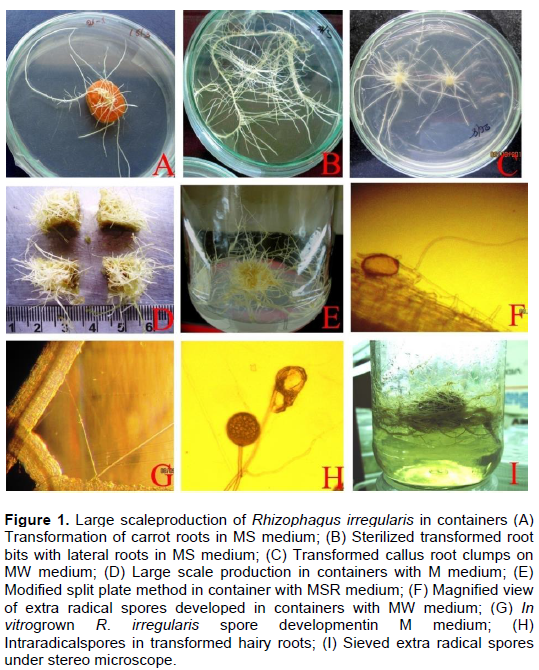 Development of callus root clumps
The continuously sub cultured transformed carrot roots were gradually lost their reproducibility. These roots became brown and inactive to reproduce. These aggregates  placed  in  the  fresh  MS  medium  gave  the opaque, massive callus root clumps within 45 to 60 days (Figure 1C) with multiple fresh hairy roots. The 1 cm sections of these callus root clumps again in fresh MS medium with 3% sucrose were giving the massive callus root clumps in subsequent subculturings also (Figure 1D). These callus root clumps in M medium produced the actively growing white hairy roots vigorously (Figure 1E). These root clumps were also found inactivated slowly in the fresh M medium with continuous subcultures. But it was found that, ~ 1 cm callus root clumps were very active in the MS medium (3% sucrose) with number of subcultures. By maintaining in MS medium root clumps were maintained during the entire cycle of production.
Inoculation and development of mycorrhizal inoculum
The spores of R. irregularis was successfully germinated and colonized the hairy roots within a week (Figure 1F). The monoxenic spores were germinated within 3 to 4 days on M medium with subtending hyphae and spreaded all the directions randomly (Figure 1G). Within 2 to 3 days hyphae contacted the extensively grown hairy roots from callus root clumps. Hyphae proliferated vigorously on the surface of roots forming various shapes of appressoria. Extra radical spores were started developing after 30 days, with incubation in 26±2°C temperature in BOD incubator. In prolonged incubation (4 months) sporulation was randomly increased and roots turned orange to brown colour. But 3 to 4% of monoxenically developed spores were aborted by leakage and spilled around the medium (Figure 1H). With prolonged incubation, roots were turned brown due to shortage of nutrients and root exudates (Figure 1I). Establishment of AMF in petri plates were supported the observation of mycelial growth, spore formation and hyphal network. But for mass multiplication of extraradical and intraradical spores of R. irregularis, containers (bottles or jars) were opted.
Large scale production in containers
After 5 days of inoculation in 100 ml containers, mycorrhizal hyphae were spreaded into the medium and new white hairy roots were developed from the callus root clump. By increased growth of transformed hairy roots from the callus root clump, density of mycelial network was increased in the medium. Because of negative geotropism in transformed carrot roots, hairy roots were mostly developed on the surface of medium by hosting the AMF. In 60 to 90 days time period, sporulation was vigorously developed in the containers (Figure 2A). The density of mycelial threads and spores was very high near roots and diluted at the bottom of the container. After 90  days  of  incubation,  the  roots  were  separated from the container and phytagel based medium was de-ionized with (10 mM) citrate buffer. The medium was sieved with mesh size 300, 150 and 60 standard test sieves and spores counted under stereomicroscope with gridline intersect method (Figure 2B). 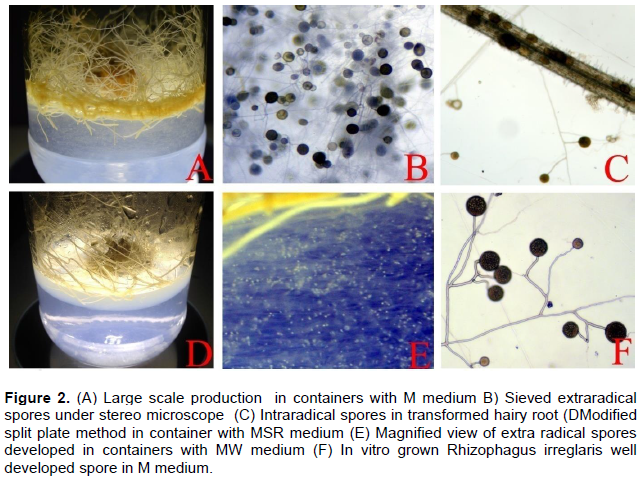 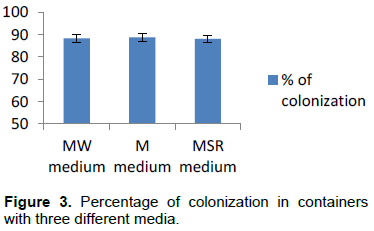 Implementation of split plate method in containers
By the implementation of split plate method in containers, within 10 days of incubation partially immersed root clumps were developed several new white hairy roots with extended lateral roots in 3% sucrose concentrated bottles than 2 and 1% concentrations. The extended hyphae were developed in the all the three media, but extensive mycelial network was developed in the containers, having 3% of sucrose than the other concentrations (Figure 2E). But the sporulation was developed slowly 40 days onwards in bottom phase (M medium without sucrose). After 40 days of incubation, establishment of spores was randomly increased.
The de-ionised and sieved M medium was filled with 88271±965.14 total spores in C3, 76374±758.49 in C2 and 40665±1730.4 in C1 respectively. The percentage of root colonization was significantly decreased with the increase   of   sucrose   concentration   (Figure    5).    C3 (72329±664.00) containers were shown highest extraradical spore count than the C2 (59023±875.27) and C1 (22941±1244.6). The intraradical spore count was observed almost same in C2 (17351±720.73) and C1 (17724±1044.0) but lowest intra radical spore count was recorded in C3 (15972±679.66) (Figure 4). The entrapped colonized callus root clumps with different sugar concentrations were gave significant variations in the development of R. irregul aris spores and development of fresh hairy roots from the clumps. 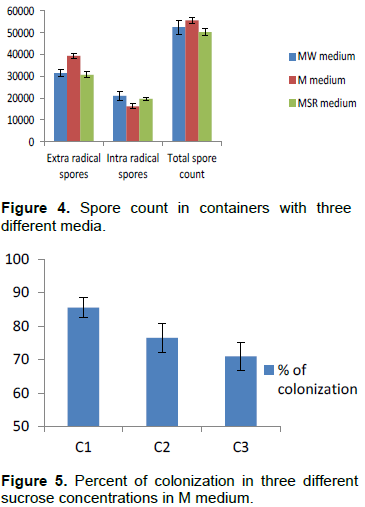 For large scale production of AMF inoculum in in vitro,  so much of research has been conducted from last two decades. The present study is also to develop a protocol for continuous large scale production of AMF spores, by modifying the root organ culture method with split plate method. To get the successful transformation, selection and identification of virulent A. rhizogenes bacterial strain is important. MTCC-532 (Chandigarh, India) strain successfully transformed the carrot roots. Continuous maintenance  of  this   bacterial   strain   in   YMA   (Yeast Mannitol agar) medium in every 30 days intervals is also important.
Adholeya et al. (2005) developed in vitro protocol for large scale production of AMF through carrot root organ culture. Transformation with Tomato, Amaranthus, Carrot, Potato, Sweet potato and Soybean parts, carrot roots were gave very good success rate of transformation with A. rhizogenes. The source of carrots was also place an important role to get maximum success rate in transformation. Freshly harvested and actively growing carrots were shown almost 70% of success rate than the carrots from local markets. By placing the basal sides in upright position carrot slices shows very good response due to their endogenous auxin levels (Fusconi, 2014). Transformed carrot slices were formed the fresh white callus and hairy roots at cambial regions. To get bacterial free transformed roots, carbenicillin (500 mg) was shown immediate response within 3 to 4 subcultures (Nauutila et al., 1995).
The host reproducibility plays an important role in the continuous large scale production of AMF culture. For the continuous production of AMF inoculum callus root clumps (active host) were developed and continuously maintained in MS medium without losing their reproducibility. R. irregularis culture from R and D Centre for Conservation Biology and Plant Biotechnology was proliferated and inoculated easily to callus root clumps. For the continuous maintenance of active callus root clumps 3% of sucrose in MS medium was needed. With continuous subculturings in M medium, MSR medium and MW medium with 1 % sugars got necrosis and lost the reproducibility of hairy roots. The mass production protocol achieved by Puri and Adholeya (2013) in jars made possible to reduce the cost and available to the farmers. St-Arnaud et al. (1996) was studied the variation in spore development in bi-compartment plate system. With the inspiration of split plate method container was separated by 0.4% CleriGel and 1% agar, it was made possible after solidification of phytagel covered with agar used MW medium (Figure 2E). St-Arnaud et al. (1996) got the tenfold higher spore in the sucrose free medium. In the present study, with the implementation of these two methods, 99204 total spore count was achieved within 90 days of incubation in MW medium.

In commercial scale production of AMF spores, continuous inoculums production is very crucial to run the cycle without disturbance and uniform production output. Regenerating callus root clumps will provide the active host continuously. Small variations in the spore count per container also make much difference in production cost, directly related to utilization of space and time. Selection of suitable medium among the three different  media  and implementation of split plate method, for continuous culturing of AMF spores make the choice of preference for large scale commercial production of AMF inoculums.