Isolation and characterization of feather degrading bacteria from poultry waste

This study was conducted to isolate, partially purify and characterize keratinolytic microbes and their enzymes for commercial exploitation. A feather degrading bacterial strain was isolated from soil where poultry feathers were dumped by the poultry farms as a waste product. The isolated bacteria grew well at 37°C and the pH of 7.5. This isolate showed maximum feather degrading activity at 37°C. The enzyme activity could be detected in the temperature range of 30 to 37°C. Keratinolytic activity was detected during growth of microbes and complete degradation of keratin was achieved. The proteolytic character of crude enzymes was assessed using azo-casein as substrate. Crude keratinase was extracted and purified by salt precipitation and dialysis. The organism was pigment producing, rod-shaped, endospore forming, catalase positive and Gram negative bacteria. Fermentation of sugars, SIM test, indole production test, citrate test, nitrate reduction test, MR test, VP test, starch and gelatin hydrolysis test were also done. The isolated bacteria produced green pigment during its growth and the media turned greenish. Phenotypic characterization carried out in laboratory showed that this Gram negative bacterium might belonged to Bacillus or Alteromonas genus. The cell free supernatant had feather hydrolyzing activity. Therefore, it can be said that it was an extracellular protease, that is, keratinase enzyme. This keratinolytic isolate could be a potential candidate for degradation and utilization of feathers. It might also be an efficient method for the production of microbial enzymes and metabolites.

The expansion of biotechnology has produced an increasing demand for high-quality inexpensive microbial growth media. Utilization of feathers from the poultry processing industry as a substrate for fermentation  might offer an inexpensive alternative for a microbial method for the production of microbial enzymes and many other metabolites (Shih, 1993). Feathers are produced in large amounts as a by-product of poultry processing plants, reaching millions of tons per year with potential environmental impact (Azeredo et al., 2006). Feathers represent 5-7% of the total weight of mature chickens. By using physical and chemical treatments, currently feathers are used in the conversion of feather meal, a digestible dietary protein for animal feed. These methods can destroy certain amino acids and decrease protein quality and digestibility (Riffel and Brandelli, 2006). Most feather wastes are land filled or burned which involve expenses and can cause contamination of soil, air and water. Thus, an innovative solution to this problems is urgently needed (Suzuki et al., 2006). Keratins are the most abundant proteins in epithelial cells of vertebrates and represent the major constituents of skin and its appendages such as nail, hair, feather and wool. The degradation of keratinous material has medical and agricultural importance (Shih, 1993; Matsumoto, 1996). A group of proteolytic enzymes that are able to hydrolyze insoluble keratins more efficiently than other proteases are called keratinases. Bacterial keratinases are of particular interest because of their action on insoluble keratin substrates and generally on a broad range of protein substrates (Lin et al., 1992). Keratinase is usually a serine protease (Bockle and Muller, 1997; Bressollier et al., 1999; Gradisar et al., 2000). Its optimum temperatures and pH values were reported to be 40 to 80°C and 6-10, respectively (Cheng et al., 1995; Friedrich and Antranikian, 1996; Bockle and Muller, 1997). Keratinase stability is influenced by temperature, pH and chemical substances (Peek et al.,1992). Many researchers isolated and characterized keratinases with respect to various parameters from different bacterial species, for instant, Bacillus licheniformis (Manczinger et al., 2003; Korkmaz et al., 2004; Ramnani et al., 2005), Chryseobacterium, Pseudomonas, Microbacterium spp. (Riffel and Brandelli, 2006), Chryseobacterium spp. (Riffel et al., 2003), Sterptomyces spp. (Bressollier et al., 1999; Montero-Barrientos et al., 2005). A high molecular weight keratinolytic protease from feather degrading DCUW strain was purified and characterized (Ghosh et al., 2008). The aim of this study was to isolate, purify and characterize keratinolytic microbes and their enzymes for potential commercial exploitation.

Effect of temperature on bacterial growth
To monitor the effect of temperature on the bacterial growth, the organisms were grown both in solid and liquid media. In solid media, the growth pattern was measured by observing the media under microscope. The visible growth pattern was good at the temperature of 37°C. Growth reduced at 45°C and no growth was visualized at 50°C. The result was presented in Table 1. The growth rate was also determined by taking absorbance (Figure 1) of the bacterial culture grown in liquid media. 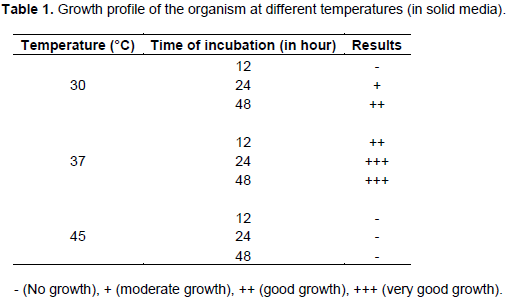 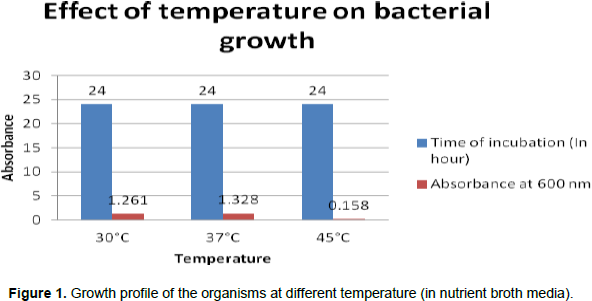 Microscopic observation after Gram staining and spore staining of isolated SAR1 bacteria
The newly isolated bacteria SAR1 was examined under microscope and found as pink colored bacteria. The bacteria looked small rod shaped and it was Gram negative bacteria. The test result was cited in Table 2. It was also observed that bacteria were endo spore forming bacteria. Spores are formed within 19 h by these bacteria. It was found that the vegetative cells were pink and the spores were green when observed under microscope. 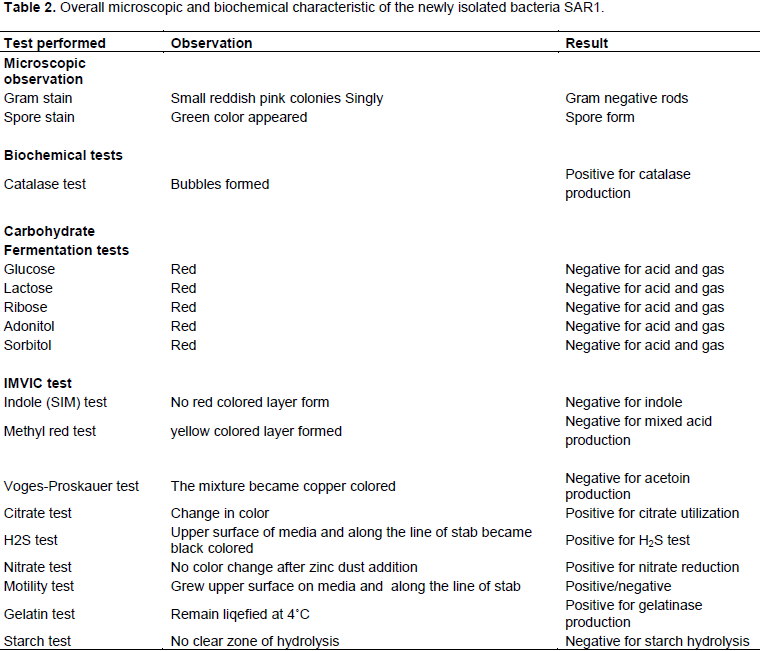 Biochemical tests
Different biochemical tests were done for characterizing the bacteria and the results are given in Table 2.
Effect of temperature on feather-degrading activity of the organism
The bacteria were grown in the liquid broth media (pH 7.2) for 12 days at different temperatures ranging from 25 to 45°C. Maximum feather degradation was observed at 37°C within 4 to 6 days.  No  significant  degradation  was observed at 45°C. The results are given in Table 3.

Result of proteolytic activity
The proteolytic activity of enzyme was determined using the procedure described earlier (Kreger and Lockwood method, 1981). Here azocasein was used as a substrate. The azocasein hydrolysis by the culture filtrate of SARI was carried. As the organism produced greenish pigment and turned the media slightly black, it was difficult to assay the enzyme activity in cell free extract. The culture filtrate was dialyzed against buffer solution to remove the pigment. After that the enzyme activity was assayed. The result was presented in Table 4. One unit of proteolytic activity was defined as the amount of enzyme that produces an increase in the absorbance of 0.01 at 440.

Feather degradation by the isolated bacteria (SAR1) under stringent selection pressure
When bacteria was incubated in media containing feather
as the sole source of carbon and nitrogen and mineral components specifically 0.2% MgCl2, 0.5% K2HPO4, 0.2% MnCl2. 1% NaCl and 0.2% cysteine under that stringent selection pressure, the organism grew and degraded the feather very slowly. Within 15 days, only 20% of total feather was degraded. The result is shown in Table 5.

Feather degrading activity of cell free culture filtrate
The degradation of feather was observed after 4 days. 86% feather degraded within 12 days. This result indicated that the culture filtrate had feather degrading activity. This result also indicated that the bacteria secreted proteolytic enzymes responsible for feather degradation.
Ammonium sulfate fraction of protein mixtures
Most   of   the    proteins    in    bacterial    culture    filtrate casein as precipitated at 75% saturation. Enzyme activity of the  pre- and pro-fractionated protein were measured. The values were given in Tables 6, 7 and 8.

The morphological and biochemical data on the growth of the organisms were analyzed by using automated software probabilistic identification package for bacteria (PIB). The analytical results indicated that the organism used in the study might belong to the genus Bacillus or Alteromonas. Some previous studies also supported these findings (Ghasemi et al., 2012; Govinden and Puchooa, 2012). Over the last few decades, bacteria, fungi and lice have been found to degrade this protein. A number of enzymes able to degrade keratin have been detected (Noval and Nickerson, 1959). These are known as keratinases. In this experiment, a number of bacteria were isolated from waste dump of feathers. These bacteria were endowed with keratinolytic activity and able to degrade keratin wastes. They used feathers as a primary source of energy, carbon, nitrogen and sulfur. The bacteria incubated at different temperatures such as 25, 30, 37 and 45°C. Growth was observed at 30 and 37ï‚°C but no significant growth was seen at 45°C, which indicated that this strain might be hemophilic. It could grow well at pH 7.5. The isolated strain was found to be Gram negative. The organism grew at 40°C but no significant proteolytic activity was detected. Many workers had shown keratinolytic activity of different organisms at different temperature (Friedrich and Antranikian,1996; De Toni et al., 2002).The optimal proteolytic activity was detected at 37°C, whereas previously described keratinolytic bacteria mostly had feather-degrading activity at elevated  temperatures (Friedrich and Antranikian,1996). An optimum keratin-degrading activity at mesophilic temperatures should be a desirable characteristic because this microorganism may achieve hydrolysis with reduced energy impute. An increase of pH values was observed during feather degradation, a trend similar to other microorganisms with large keratinolytic activities (Kaul and Sumbali,1997; Sangali and Brandelli, 2000; Riffel and Brandelli, 2006). This trend might be associated with proteolytic activity, consequent de-amination reaction and the release of excess nitrogen as ammonium ions. The increase in pH during cultivation is pointed as an important indication of the keratinolytic potential of microorganisms (Kaul and Sumbali, 1997). Considering that, feather protein has been shown to be an excellent source of metabolizable protein, and microbial keratinases enhance the digestibility of feather keratin (Odetallah et al., 2003).

From the above discussion, it might be concluded that the phenotypic characterization carried out in our laboratory showed that this Gram negative bacteria belong to Bacillus or Alteromonas, which degrade keratins. There were circumstantial evidences to suggest that the enzymes are keratinases. This keratinolytic isolate could be a potential candidate for degradation and utilization of feather keratin to produce animal feed protein. Furthermore, this isolate possessing potential biotechnological use might be employed to remove environmental hazards like chicken feather.