Pseudomonas aeruginosa has developed antibiotic resistance, a major health concern worldwide, through different mechanisms including the formation of biofilms. Thus far, typing has been primarily assay based. However, the many sequences available from the US National Center for Biotechnology Information (NCBI) and the International Consortium of Pseudomonas Database (IPCD) offer alternative ways of characterizing the biofilm formation genes which would reveal novel therapeutic targets for intervention. The current study employed profile hidden Markov models (pHMMs) in the characterization of biofilm formation genes and identification of possible variations based on the different ecological niches occupied by strains of P. aeruginosa. Statistical analyses were performed in R (v. 3.1.3) to determine the significance of these variations. Validated pHMMs identified a total of 197 hits for the 13 different ecological niches, with the human metagenomes recording 144 hits (73%) while the non-human metagenomes recorded 53 hits (27%). Human metagenomes had a significantly higher density of hits, with the abscess metagenomes indicating the highest density of hits. The overall result indicated a significant variation in density of hits between the different sites within the human metagenomes. This study successfully highlighted the significant value of already sequenced metagenomes in the identification of potential targets for novel therapeutic compounds. The profile hidden Markov model successfully identified 197 unique biofilm gene clusters emphasizing its importance in analyzing different sequenced pathogenic strains. The study recommends that experimental assays could be carried out to shed further light on the different biofilm formation gene clusters.

Conventional investigation of Pseudomonas aeruginosa biofilm formation genes has primarily been based on biological assays such as the evolution assays. These assay-based analyses are time consuming and labor intensive, and may give negative results if changes occur due to mutations in the biofilm formation genes (Gong et al., 2012). In the last few years P. aeruginosa sequences have become increasingly available, so that a database search and pair-wise comparisons are alternative ways of characterizing them.
A previous study has indicated that pair-wise sequence identification of long alignments that are greater than 40% are ideal for providing unambiguous results (Zheng et al., 2019). A different study indicated that a database search may not identify the relationship between the query and target sequences if the sequence identities of related proteins are less than 30% (Kirsip and Abroi, 2019). The comparison performed for both these methods requires that a known reference strain is chosen for the analyses. To select an appropriate representative strain, one requires extensive biological knowledge of the protein family under study. The choices made at this point will inevitably affect the outcome of the downstream analyses.
Rather than using all available biofilm formation gene sequences, the study chose sequence representatives for downstream analyses. The sequences were multiply aligned and their consensus used to build the probabilistic profile hidden Markov model (pHMM). Model construction was performed using the software package HMMER (Eddy, 2011). Profile HMMs have previously been used to molecularly detect viruses within metagenomic data, search for Cry proteins expressed by Bacillus spp. genomes and characterize the subtypes of HA gene (Gong et al., 2012; Skewes et al., 2014; Castillo-Esparza et al., 2019).
A profile HMM is an ideal model to quantitatively assess how an individual sequence belongs to a profile given that it is both probabilistically and statistically intrinsic (Eddy, 2004, 2011). The Pfam database which comprises annotated protein families has relied heavily on profile HMMs in the characterization of such families. With this database, researchers can search for, characterize and classify members of these protein families (Sonnhammer et al., 1997). The current study explored the use of profile HMMs in revealing the variation and conservation patterns of biofilm formation genes in different strains of P. aeruginosa. All non-redundant P. aeruginosa sequences were downloaded from the NCBI and IPCD databases for investigation. Custom python scripts were used to retrieve the biofilm formation gene sequences from representative strains of the opportunistic pathogen. We constructed individual models for the 13 biofilm formation genes that were retrieved by the custom python scripts. This made it possible to construct gene-specific profiles and evaluate how different strain sequences fitted into the specific profiles to provide an overview of how the genes are distributed in the pathogen strains occupying different ecological niches. These analyses provided insights into the relationship between the biofilm formation genes and pathogens occupying specific ecological niches.

Identifying protein family of interest
The construction of profile hidden Markov models was based on multiple sequence alignments of DNA or proteins sequences from the same functional family. The pHMM was used to represent the patterns, motifs along with other statistical properties of the alignments. Before the actual construction was performed the protein family of interest under investigation was selected. The criteria identified by Henikoff et al. (1997) were used to identify the protein family of interests. In this case the protein family of interest represented a set of genes performing similar functions in different strains of P. aeruginosa, the pathogen under study.
Selecting sequences representative of this family
With a protein family of interest identified, representative sequences from these sequences were selected for model construction. Purposive sampling of sequences initially retrieved from the custom python scripts was performed in this case to ensure that the selected sequences provide the most informative findings in the downstream analyses. A 40% sequence similarity threshold was chosen as suggested by a previous study which indicated that long alignments greater than 40% are ideal for providing unambiguous results (Zheng et al., 2019). Sequence files with similarity identities less than 40% were excluded from the downstream analyses.
Building multiple sequence alignment
To create a pHMM of each of the classes of biofilm formation genes, a global multiple sequence alignment was generated using MUSCLE (v.3.8.31) (Edgar, 2004). The MUSCLE algorithm used for these analyses is available in the UGENE platform (Okonechnikov et al., 2012). The study used the default values for the gap open penalty (54.00), gap extension penalty (8.00), and terminate gap penalty (4.00). These gap penalties were used to control the positions of the conserved regions within the alignment. The consensus sequence from these global alignments informed the construction of the specific profile hidden Markov model.
Building of profile HMM
From the multiple sequence alignments, the HMMER3 toolkit available on the UGENE software was used to construct profile Hidden Markov Models (pHMMs) for the different classes of biofilm formation genes for analyses of genomes of P. aeruginosa strains (4). For each of the twelve biofilm formation genes, the study created a profile HMM. The hmmbuild algorithm within the HMMER3 tool (v 3.1b1) in the UGENE software was used to create a suitable profile HMM from the MSA aligned-FASTA file (http://hmmer.janelia.org). The algorithm generated a hmm file containing a consensus sequence for the biofilm formation genes in P. aeruginosa.  The HMMER3 platform was accelerated by the Multiple Segment Viterbi (MSV) algorithm that is implemented in the software package (Eddy, 2011).
The study chose different threshold values for estimation of the conserved regions to facilitate different simulations of the database search. These simulations were performed to give credence to the sensitivity of the models which  previous  studies  have  shown is more important than the model’s specificity. The accurate models can efficiently detect protein family members even when they fail to identify ineffective residues.
Validation of profile HMM (select positive and negative controls)
Using the hmmer search algorithm on UGENE, sequences used to construct the model were searched for as positive controls. Sequences of unrelated microorganisms (Table 1) were also searched for as negative controls. The presence of signals for the positive control search and lack of signals for the negative control search demonstrated the efficiency in the prediction by the constructed models. The controls were also screened using a traditional BLASTn with the algC phosphomannomutase as the driver sequence (GenBank accession number NC_002516.2) to compare the sensitivity and specificity of each approach. The visualization of the constructed pHMM was performed using the HMM visual editor (HMMVE_1.2). 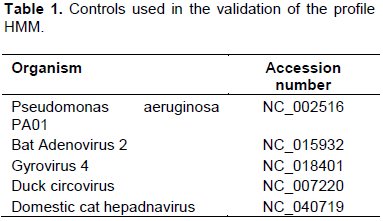 Target sequence translation
The study created a python script to translate the nucleotide sequences of P. aeruginosa into protein sequences to facilitate the comparison with the constructed protein profile HMMs. The constructed python script used the standard genetic code to translate nucleotide sequences in six frames.
Screening the selected database
The study used the HMMER3 hmmsearch tool with default parameters to search for the biofilm formation profile HMM against sequences of P. aeruginosa drawn from different ecological niches as listed in Table 2. A significance cutoff of E ≤ 1 × 10-5 was chosen for the search by the profile HMMs. A traditional BlastP was performed on the pathogen’s sequence as an additional comparison of performance.
Statistical analyses
Statistical analyses were performed in R (v. 3.1.3) (R Core Team, 2015).

Across the human and non-human metagemones examined, this study successfully identified 197 unique biofilm formation gene clusters using the profile hidden Markov model, further highlighting the tremendous value of already sequenced metagenomes in identifying potential targets for novel therapeutic compounds. Given that the study was performed entirely in silico, experimental assays can be carried out on the different biofilm formation gene clusters to identify and characterize gene clusters that can be targeted to modulate chronic infections arising from pathogenic strains of P. aeruginosa.

The authors appreciate Dr. Okoth Patrick for his critical comments and suggestions for improving the manuscript. Special thanks to the Department of Biological Sciences, SONAS, MMUST.