Shark liver oil (SLO) has been widely used as a food supplement to boost human immunity. The extraction method of shark liver oil is immature. In this study, four different extraction methods of shark liver oil were tried, the effect of the solid-liquid ratio, quality of the enzyme, reaction pH and temperature on SLO extraction rate have been discussed. Infrared spectroscopy, gas chromatography and high performance liquid chromatography was used to detect the main composition of SLO, and U14 tumor bearing mice were used to explore anti-tumor effect of SLO. Our results show that alkaline protease extraction method was the best with an extraction rate of 30.15%, and the solid-liquid ratio, quality of the enzyme, reaction pH and temperature was 1:2, 2% of the liver quality, 9, 3.5 h, 48°C respectively. Characteristic peak of alkoxy glycerol, squalene and vitamin A was presented in the IR spectra of SLO, the proportion of alkoxy glycerol, squalene content and vitamin was 35.3, 40.4 and 7.8% determined by gas chromatography (GC) and high performance liquid chromatography (HPLC). The inhibition rate was 54.56.

Shark liver oil contains a variety of active ingredients, including vitamins A, vitamin D, and squalene terpenoids (Wang, 2006; Ma et al., 2010). It can activate the reticuloendothelial system, enhance the anti-tumor ability (Wang, 2003), promote the vitality of immune cells, stimulate the regeneration of the immune cells (Huang et al., 2009; Joon-Son Sim et al., 2007), clear intracellular radicals, regulate physiological balancing effect, and also increase the quantity of white blood cells, platelets and lymphocytes (Laurence et al., 2002; Zi et al., 2000).
There is a number of shark liver oil extraction method for instance, the water extraction method is of a low cost and simple method (Bao et al., 2006), which cannot effectively separate the oil, which tightly connect with tissue and is only suitable for small work shop production. Supercritical fluid extraction needs large equipment and has a large cost (Han et al., 2003). The oil extraction method had a low market value. Finally, the ultrasonic extraction is unable to separate the fat composition from the  protein (Hu et al., 2002; Romain et al., 2004). Among
the extraction techniques, the effect of squeeze extraction is poor, which had greater cost, low utilization rate and a serious waste. The increased demanding increasing and the limited source of the shark make the exploration of a high efficient extraction method of shark liver oil critical. 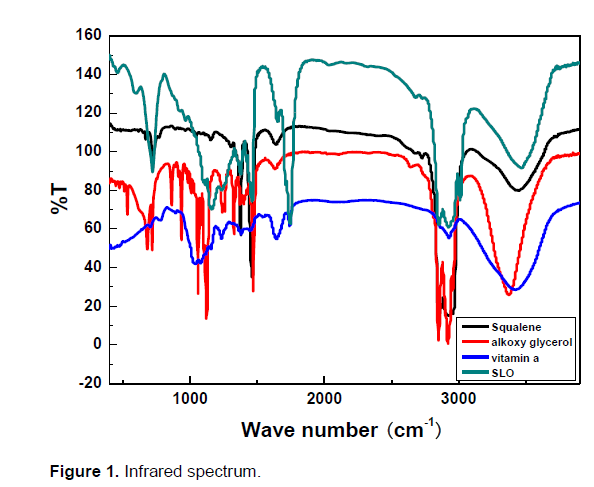 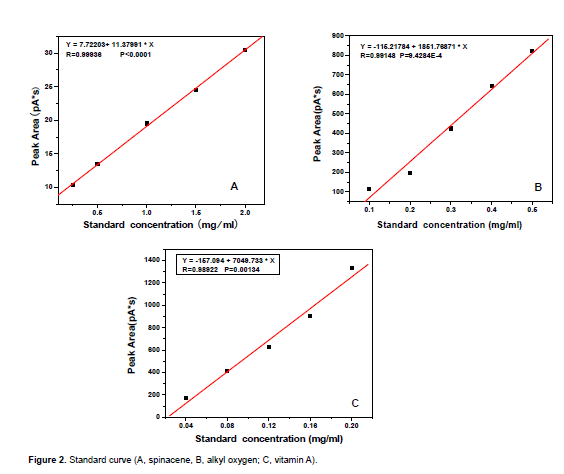 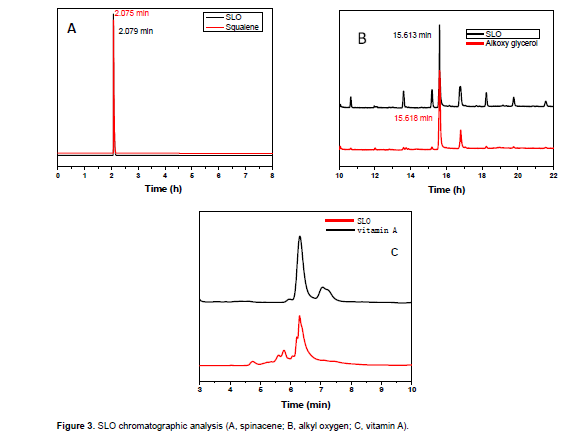 Anti-tumor effect of SLO in vivo
Tumors in each group were weighted, noted, and the tumor inhibition rate was calculated. The results are shown as Figure 4. The inhibition rate for the high and low dose group is 54.56 and 35.60%, respectively. 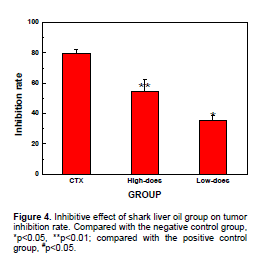 Conclusions
In this study, we reported the Extraction and identification of shark liver oil. The best extraction method was alkaline protease method, and the solid-liquid ratio, quality of the enzyme, reaction pH and temperature was 1:2, 2% of the liver quality, 9, 3.5 h and 48°C respectively with the most extraction rate of 30.15%. Characteristic peak of alkoxy glycerol, squalene and vitamin A was presented in the IR spectra of SLO; the proportion of alkoxy glycerol, squalene content and vitamin was 35.3, 40.4 and 7.8%. Anti-tumor effect of SLO is significant with a inhibition rate 54.56%.

The authors declare that they have no any direct financial  relation with the commercial identities mentioned in this  paper that might lead to a conflict of interest for any of the authors.

This study was supported by National Natural Science Foundation, China.