Sections from duodenum, jejunum and ileum of local breeds of goat (Capra hircus) were studied histologically using light and scanning electron microscopy. The wall of goat small intestine is composed of typical layers: lamina epithelialis mucosae, lamina propria, lamina muscularis mucosae, tunica submucosa, tunica muscularis and tunica serosa. Small intestine villi were covered by a simple columnar epithelium with goblet cells and simple tubular glands, the crypts of Lieberkühn, containing paneth cells were observed between the villi. The presence of mucus was extensive in the duodenum and the number of goblet cells was highest in the duodenum. The lamina propria consisted of loose connective tissue rich in blood and lymphatic vessels. The lamina muscularis mucosa was presented as a thin layer of circular smooth muscle fibers at the base of the crypts. The submucosa consisted of conjunctive tissue containing blood and lymphatic vessels. The tunica muscularis consisted of the typical inner circular layer and outer longitudinal layer of smooth muscle. The tunica serosa was the thin, outermost small intestine layer that consisted of a very small amount of conjunctive tissue covered by mesothelium. The submucosa was devoid of glands in all three small intestine regions. Scanning electron microscopy showed finger shaped villi in the jujenum, tongue shaped in ileum, leave like in duodenum; the villus has corrugated surface. The corrugations are deep, irregular clefts cutting into the side of the villus. The corrugations are scarce in the duodenum, few in jujenum and numerous in ileum. The surface of villi presents the goblet cell orifices.
Keywords: goat, intestine

Recently, goats became an important component of animal production in Egypt. At the economic level of individual families, small ruminants serve as investment and insurance due to their high fertility, short generation interval, ability to produce under limited feed resources and their adaptability to harsh environments (Sedeke, 2007). Goats are useful to humans when they are living as they serve as a renewable source of milk, manure and fiber, and then they can also provide meat and hides (Abdel Aziz, 2010). Goats produce about 2% of the world's total annual milk supply (FAO, 1997).
Due to their small size and greater efficiency of nutrient processing, goats are easier and cheaper to manage as compared to cattle, but can still be used for transporting items. Goat intestine can be used to make "catgut", which is still in used for internal human surgical sutures and strings for musical instruments. The small intestine responsible for digestion and absorbtion is anatomically divided into three parts, the duodenum, the jejunum and the ileum. The wall structures of these three parts are similar except few differences. The duodenum is the shortest while the jejunum is the longest (David, 1987).
There is little information about the histologic structure of goat small intestine, so the current study was carried out to provide basic information concerning the goat small intestine for anatomists and nutritionists.

Randomly taken parts from duodenum, jejunum and ileum of ten healthy freshly slaughtered adult goats (five for each sex, about 3 to 4 years of age) were collected from a local slaughterhouse in the Suez governorate, Egypt. All procedures were carried out in full compliance with the guidelines provided by the Suez Canal University Institutional Animal Use oversight committee and are in accordance with international protocols for biomedical investigations.
For light microscopy, sections of intestine (for light microspy, 2 cm length pieces from the three regions of the small intestine) were immersed in 10% formalin for 24 h then processed routinely for paraffin embedding, sectioned at 4-5 µm, then stained routinely with H&E, periodic acid-Schiff (PAS) or Masson’s trichrome stain before being coverslipped (Bancroft and Stevens, 1982). Stained sections were documented for analysis using an Olympus microscope, model BX50.
For scanning electron microscopy, the specimens (1 cm length pieces from the three regions of the small intestine) were placed in 1% paraformaldhyde and 1.5% glutraldhyde in 0.1 M phosphate buffer (pH 7.2) for 2 h at 4°C. These pieces were then cut into smaller pieces (about 5 x 5 mm). The pieces were washed with 0.1 M phosphate buffer (pH 7.2) then put in 0.1% osmium tetraoxide in the same buffer for 2 h. Then, the pieces were dehydrated using a graded ethanolseries from 70 to 100%, critical point dried in a Seevac CO2 Critical Point Dryer, mounted on _inch Zeissaluminum SEM mounts using colloidal silver paste, and sputter coated with gold using a Hummer II Sputter Coater then examined by a JEOL-5400 LV scanning electron microscope. These procedures were as described by Yamauchi et al. (1990) and Maneewan and Yamauchi (2003). Anatomical nomenclature used in this study was based on the Nomina Anatomica Veterinaria (I. C. V. G. A. N., 2005) whenever possible. 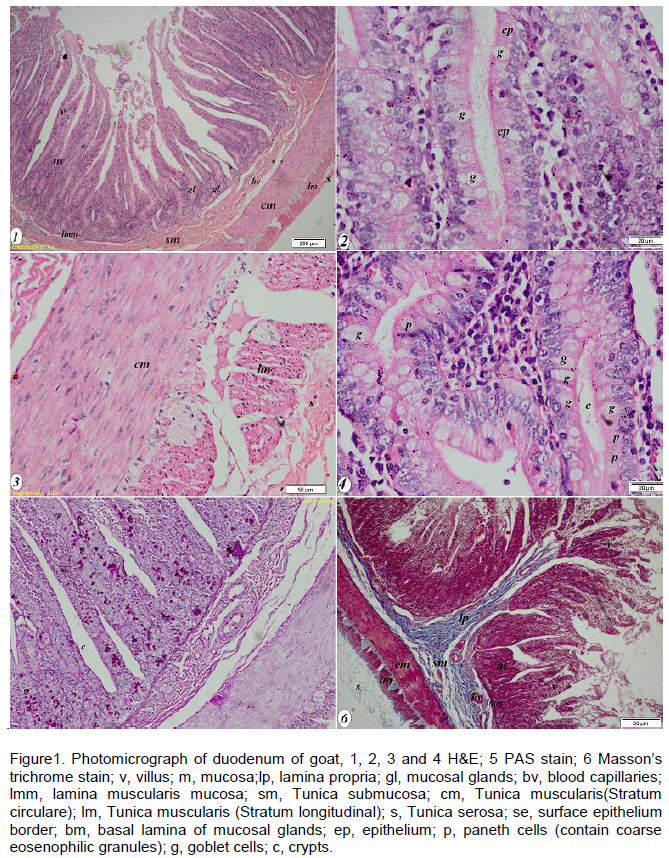 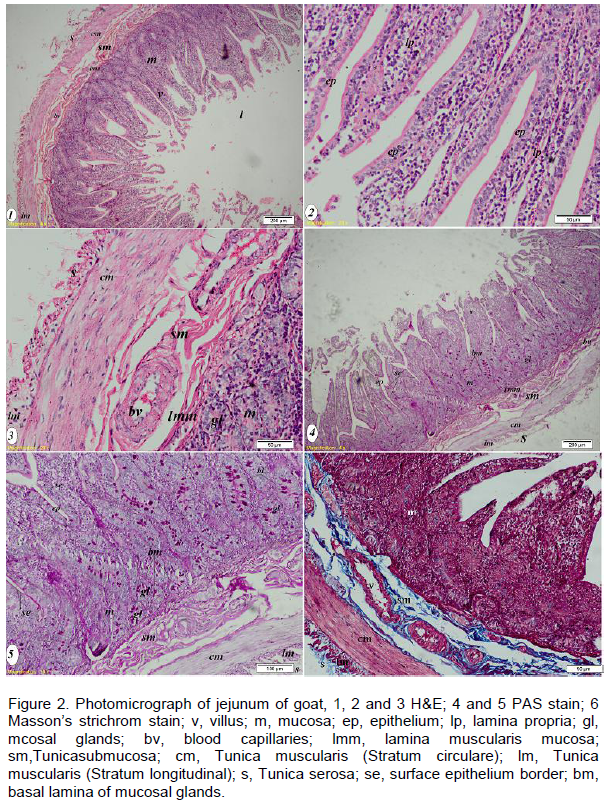 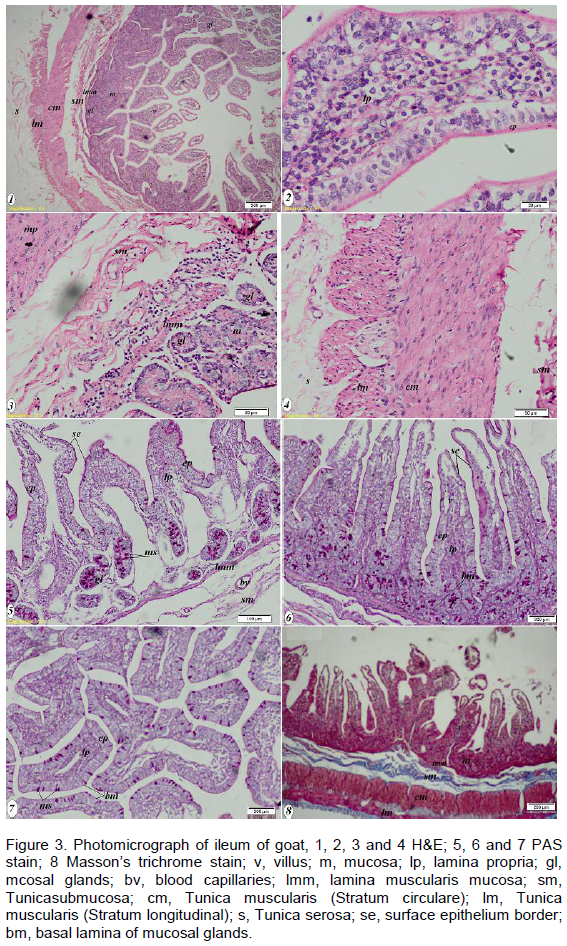 Scanning electron microscopy
Jejunal villi were finger-shaped with broad bases tapering to a blunt apex, while, tongue shaped villi were found in the ileum and the duodenum presented leave-like villi (Figure 4). A marked feature of the villus was its corrugated surface, which is not easily seen by dissecting microscope. The corrugations consisted of deep, irregular clefts cutting into the sides of each villus and divided the villi into separate islands of tissue (Figure 4). The majority of these corrugations tended to run horizontally (Figure 4). The corrugations ended abruptly and did not form a continuous system of clefts (Figure 4). These corrugations were scarce in duodenum, more frequent in the jejunal villi and most numerous in ileal villi (Figure 4). Circular or oval holes were seen opening into the epithelial surface, which were goblet cell orifices (Figure 4). Mucus extruding from goblet cells was frequently observed (Figure 4). Individual epithelial cells were sometimes observed (Figure 4) and consisted of flat-topped cellsor cells presented with a gradual outwardly convex surface. The arrangement of the epithelial cells gave a honeycomb appearance on the villous surface (Figure 4). 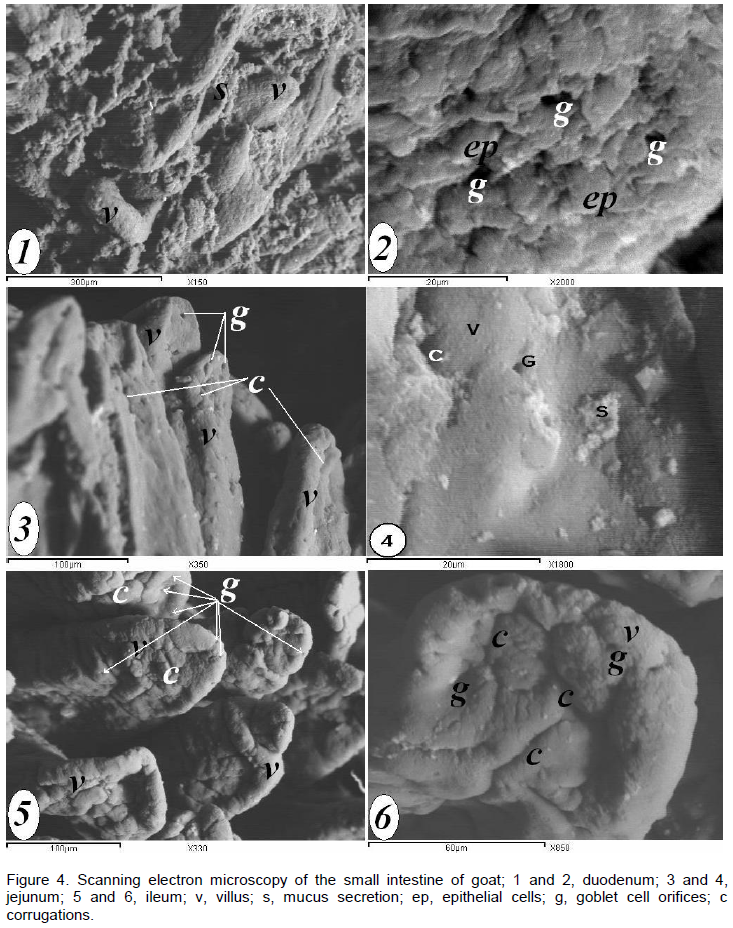 The wall of the goat small intestine is composed of the typical layers: Lamina epithelialis mucosae, lamina propria, lamina muscularis mucosae, tunica submucosa, tunic muscularis and tunica serosa. Villi were present and covered by simple columnar epithelium. Goblet cells were scattered among the simple columnar epithelial cells. These findings are similar to those reported by David (1987) for human small intestine. Among the villi, we observed simple tubular glands, the crypts of Lieberkühn, extending down into the lamina propria to the level of the lamina muscularis mucosae. These findings are similar to that of David (1987) and Leslie and James (2007) in both humans and animals. These crypts contain paneth cells, which have large acidophilic cytoplasmic granules. Paneth cells have been reported in the crypts of Lieberkühn of small intestine of various mammalian species (Garabedian et al., 1997; Glerean and Castro, 1965; Mathanm et al., 1987; Taylor et al., 1964).
Deschner (1967) reported that human paneth cells were not limited to the bases of the crypts but could be observed along the entire length of the crypts and even in the surface epithelium of the villi. No paneth cells have been observed in villi epithelium of sheep (Ergun et al., 2003). Bjerknes and Cheng (1981) and Garabedian et al. (1997) reported that the paneth cells differentiate as such towards the base of the crypts and hence the finding of the young cells at the top and the matured cells at the bottom of the crypts. In the goat, we observed that paneth cells were limited to the base of the crypts.
Goblet cells were also found in the crypts and, as in the villi. These findings are similar to those in humans (David, 1987). Extensive mucus was observed in the duodenum, and goblet cells were the most numberous in the goat duodenum, perhaps due to the absence of Bruner's glands in submucosa of the goat duodenum and also may be due to the rough, dry foods typically consumed by goats. The lamina propria consisted of loose connective tissue rich in blood and lymphatic vessels present in the core of the villi and between crypts. These findings are similar to that of David (1987) and Stevens and Lowe (1992) in both humans and animals. The lamina muscularis mucosa was a very thin layer of circular smooth muscle fibers at the base of the crypts. These findings are similar to that of Lesson and Lesson (1988) in humans and animals. The tunica submucosa, tunica muscularis and tunica serosa were all similar in appearance to these same layers observed in humans and other animals (David, 1987; Fawcett, 1994).
Bifurcated and trifurcated villi were seen. The tunica submucosa of the duodenum lacked mucus secreting Brunner's glands. These findings are in contrast to observations of Carlos et al. (1983) in humans and may due to the presence of high number of goblet cells in the goat duodenum. The goat jejunum had no gland or lymphoid nodules in the tunica submucosa, similar to observations of Fawcett (1994) in humans. The goat ileum had the shortest villi and least number of goblet cells. These findings are similar to that of David (1987) and Fawcett (1994) in human and animals. We did not observe Peyer’s patches in the tunica submucosa of the ileum in contrast to observations of Lesson and Lesson (1988) in humans.
We used scanning electron microscopy to examine the surface structure of the goat small intestine mucosa. Goat ileal villi were broader than those of the jejunum and duodenum in contrast to David (1987) who reported that duodenal villi were the broadest in humans. The shapes of villi in goat small intestine were tongue-shaped, leaf-like and finger-like as observed for humans (David, 1987). As many as 20 crypts may surround each villus (Cocco et al., 1966), but a functional ratio of three crypts to one villus has been proposed (Loehry and Creamer, 1969). We did not observe the crypts with scanning electron microscopy due to villus density and presence of secretions over the epithelial surface but we were able to use light microscope to observe the intestinal crypts. It was possible to see epithelial cell outlines as reported by Granger and Baker (1950).
Marsh et al. (1968), Toner and Carr (1969) and Peter et al. (1970) stated that at high magnification, hexagonal patterns formed by the close-packed apical surfaces of the columnar cells may be seen in the human small intestine, but in our study, the cell outlines seemed to be polygonal. We observed that, the mucus discharge from goblet cell orifices and similar observations were reported by Trier (1963). The state of the goblet cell at the moment of fixation is dependent on numerous factors, eg, mechanical and traumatic (Moe, 1955), degenerative (Padykula, 1962), fasting and drugs used for anaesthesia (Marsh and Swift, 1969). A 'fuzzy coat' layer immediately adjacent to the plasma membrane of the lining cells of the gastrointestinal tract was reported in 1965 (Ito, 1965) and its thickness varied from cell to cell (Ito, 1965; Mukherjee and Williams, 1967). It is resistant to chemical and enzyme activity, suggesting that it is part of the epithelial cell and probably synthesized by it. Despite the most careful cleaning of the specimen, this material is apparent in most specimens. With the scanning electron microscope, it is not possible to say whether the layer we observed is mucus or is superficial layer (Marsh and Swift, 1969). This layer was not detected in our specimens. Overall, most of the LM and SEM results are in line with that recorded before in other animals and human except few differences.