This research aims to investigate the inï¬‚uence of production conditions on the quality of aluminium casting with open-cell aluminium foam core. Open-cell aluminium foams were produced using vacuum pressure to aid molten metal to be fill into space of water-soluble space holders to obtain aluminum foams with specific pore sizes. The produced foams were then used as cores for castings. Optical microscope was employed for determination of the final cast product structure. Results indicate that open-cell aluminum foam can be successfully used as a core for casting without pore intrusion by molten metal. However, the quality of final cast products depends significantly on preheat and pouring temperature conditions. Possible optimal conditions for good quality castings were suggested.

Current research in materials engineering is focused on developing new materials for the purpose of producing structural elements of lower density with improved performances. One of the great interest new materials is metal integral foam, including castings (Körner et al., 2006; Bauer et al., 2013; Vacario et al., 2016), sheets (Banhart, 2001, 2007; Banhart and Seeliger, 2008; Wang et al., 2015) and tubes (Hangai et al., 2015), which has a solid skin at the surface and a foam as core. Most metal foam cores currently used in castings are closed cell type due to simple manufacture. Even metal integral foam with closed cell metal core can avoid penetration of molten metal or adhesive into the porous structure when making surface skin on the core, the drawbacks of the closed cell foam core are non-uniform structure (Kennedy, 2012; Körner et al., 2006) and cracks created during the solidification of the foam (Florek et al., 2014). The lack of control metal foam core structure results in unpredictable properties of final casting products. Open-cell metal foam, which often has well control size and uniformity of pores, would be a good candidate for the foam core. However, approach for prevention of pore penetration is needed. It is therefore the purpose of this work to investigate the use of open-cell foam core for making a metal integral foam without skin material penetration into the porous structure of the core. Factors that affect casting and core structure including pore size, pouring temperature and preheat temperature were investigated with the aim to gain new insights and derive practical implications in the  implementation  of  open-cell aluminium foam for usage as a core in metal castings.

Aluminium castings having open-cell aluminium foam cores were produced using two step processes: core and cast product production. In core production, open-cell aluminium foam cores were produced using space holder technique via vacuum infiltration casting method. Water-soluble template balls (Srimanosaowapak and Wattanapornphan, 2014) with 6 and 10 mm diameter were used as space holder. Plaster molds each having a cavity of donut shape with 25 × 20 mm rectangular section and two prints each with 25 × 20 mm rectangular section were produced. The prints were used for core placement. Six cores were produced for different conditions of cast product production. The core production included (i) melting of 1 - 2 kg AC2A alloy, whose chemical composition is given in Table 1, in a plumbago crucible in an electrical resistance furnace at 794 to 800°C, (ii) casting with and without vacuum infiltration into a 600°C preheated plaster mold having a cavity of donut shape filled with water-soluble template balls, and (iii) removing the cast core from the mold without leaching the template balls. In core production, a K-type thermocouple was placed in each plaster mold to monitor cast product temperature. The mold setup for cast product production is shown in Figure 1. Six cast products with different pore size, pouring temperature and preheat temperature were produced. The cast product production included (i) seating the cast core using two added projections (core prints) on the pattern in a plaster mold having a cavity of 5 x 12 mm larger than the cast core, (ii) preheating the mold together with the cast core at 600 to 615°C, (iii) casting AC2A alloy melt at 800 to 900°C into the mold, (iv) removing the cast product from the mold, and (v) immersing the cast product in water to leach the template balls via the core prints resulting in the cast product with open-cell aluminium foam core having porosity of an inverse structure of space holder. All cast products with open-cell aluminium foam cores were sectioned, ground and polished in both longitudinal and perpendicular direction to observe their structure. Example of sectioned specimens of a cast product is shown in Figure 2. Microstructure of the cast products was examined using an optical microscope. Defects were investigated by visual observation on high magnification images at different locations. 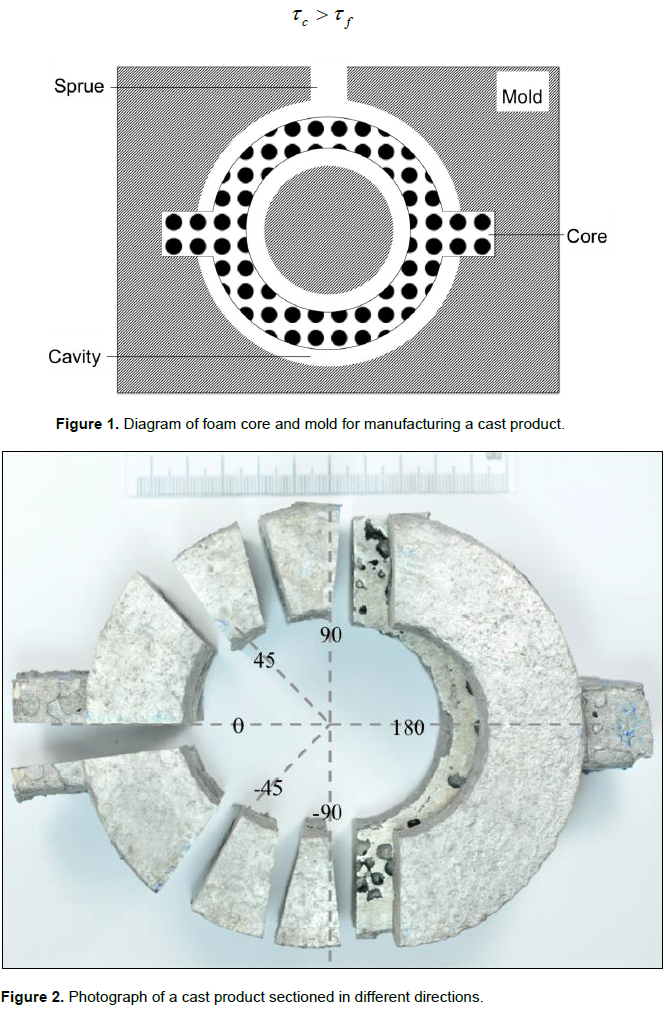 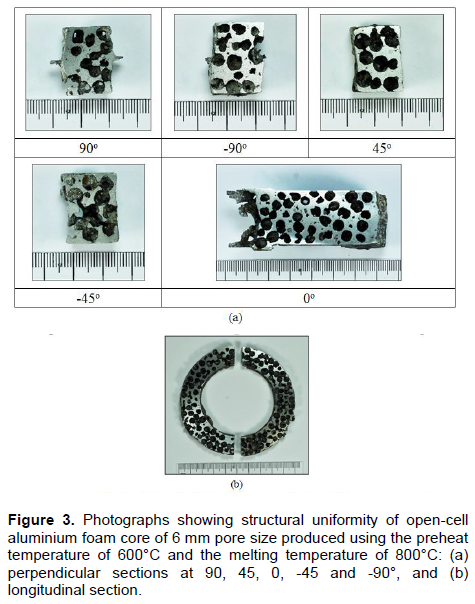 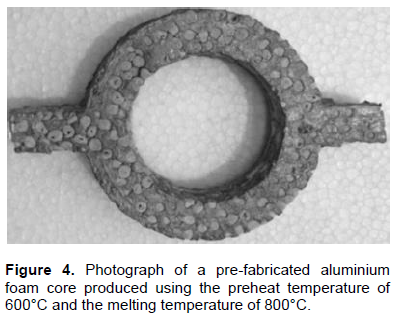 Cast product with open-cell aluminium foam core
Cast product was successfully produced using open-cell aluminium foam as a core. However, good quality of castings was obtained only with some production conditions, that is, preheat temperature of 600°C with pouring temperature of 800 and 850°C, wherein castings were complete without drift and pore intrusion, as can be seen in Figure 5. For higher both pouring and preheat temperatures, castings lacked completeness, wherein either drift or pore intrusion appeared. The completeness of a casting is expected to depend on the strength of core and forces acting on the core. When the stress generated by imposed forces exceeds the strength of the core, the core  will  fracture.  The  criterion  for  core   viability can therefore be determined by the equation:  While  is the core shear strength and  is the  shear  stress given by forces acting on the core. The imposed forces on the core are forces generated by buoyancy, metallostatic pressure and jet impact of molten metal, while the strength of the core at semi-solid conditions of this work AC2A alloy would be roughly estimated as shown in Figure 6 taken from the literature (Dahle and St John, 1998).  The  solid  fraction  at  temperatures  of  the current alloy was obtained using ProCAST software with Scheil equation determination as shown in Figure 7. Based on the data from Figures 6 and 7, the strength of the current core at preheat temperatures 600 and 610°C is expected to be 2.5 and 0 kPa, respectively. Ignoring the effects of metallostatic pressure and jet impact of molten metal, the shear stress provided by buoyancy force on the core is estimated to be 0.334 kPa for the average density of molten metal between 618 and 900°C. The limit of core failure based on the calculated and material shear strength of this work was found to be in accordance with the results shown in Figure 5. Pore intrusion was clearly seen at top section of the cast products with the core experiencing preheat temperature  of 610°C and pouring temperature of 850 and 900°C. Even though the cast product produced by the pouring temperature of 800°C and preheat temperature of 610°C appeared to have no pore intrusion, significant core drift towards top of the cast product was obviously seen. This implies that the pore intrusion at top section of the cast products would occur by the rupture of core by floatation. The cores preheated at 600°C, on the other hand, seem to be stronger than those preheated at 610°C as only pouring temperature of 900°C broke the core of the cast product, possibly due to overwhelming thermal energy of the molten metal. Summary of the influence of preheat and pouring temperature on core viability in terms of pore intrusion by molten metal is given in Figure 8. 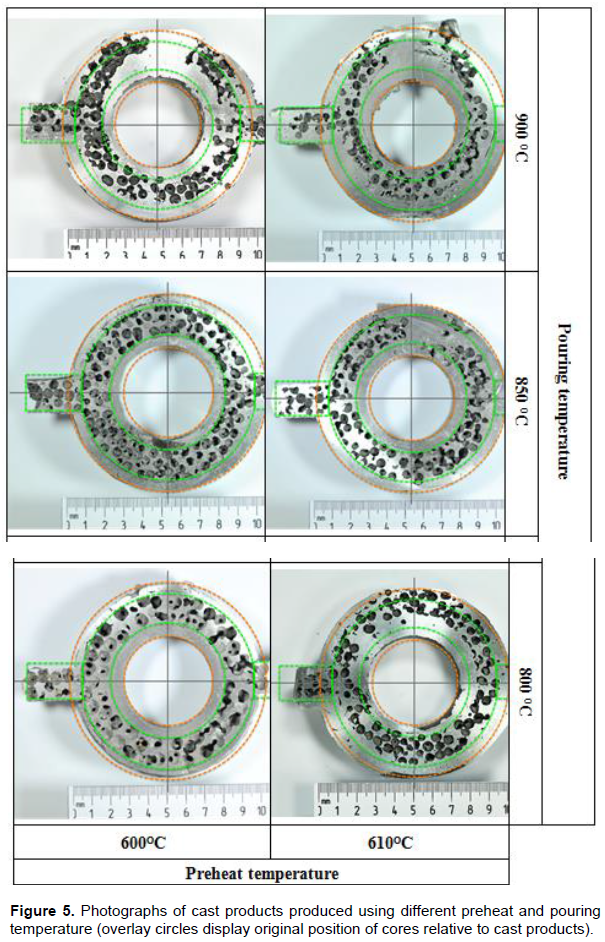 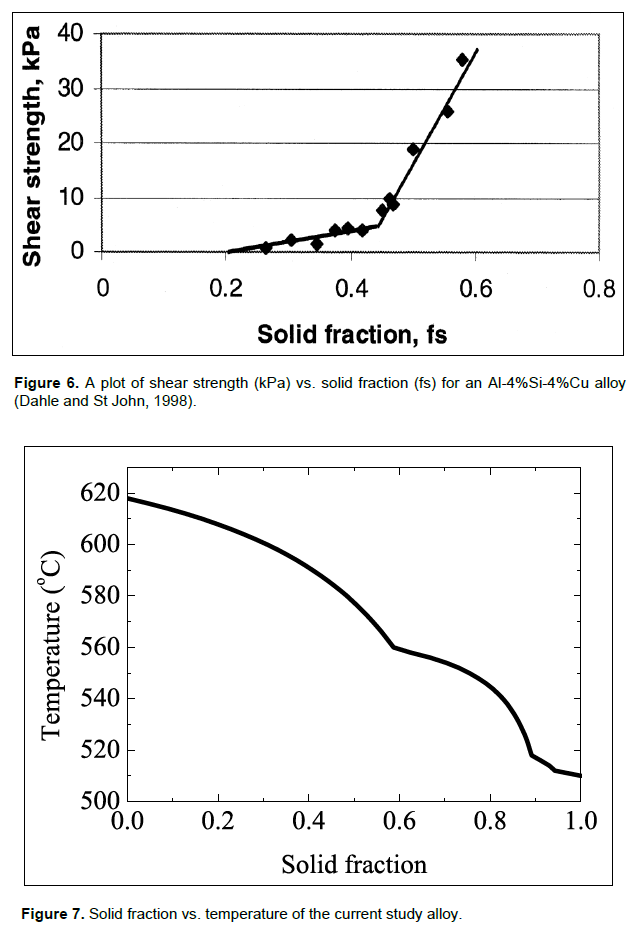 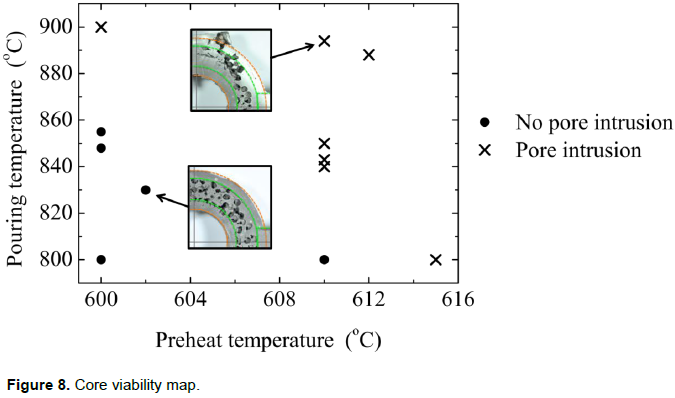 Continuum structure between cast product and core
Factors that affect continuum structure between cast product and core include mold filling and solidification time, which are mainly determined by the preheat temperature of mold and core, and the pouring temperature of molten metal. Re-melting of core during product casting is a crucial criterion to produce a high quality cast product having good bonding between core and casting, likewise that in composite metal castings  (Fjeld and Ludwig, 2009). To investigate the continuum of structure between open-cell aluminium foam core and cast metal, interface between the two components was observed as shown for example in Figures 9 and 10. Only 90 and 45° sections, which are at top part of the cast product, were found to have no interface, while 0, -45 and -90° degree sections, which are at bottom part of the cast product, were found to have explicit interface between the open-cell aluminium foam core and the cast metal. This result suggests that the top part of the cast product, when closer to mold entrance, would contain more heat than the bottom part resulting in re-melting of the solid open-cell aluminium foam core. It should be noted that some area of the same specimen sections contained structure both with and without interface as shown in Figure 10. Such localised continuum structure may be caused by the variation of solidification time within the casting. In order to obtain a good quality of casting with continuum structure, good mold design and suitable casting parameters are required to obtain an equilibrium temperature on the whole core surface and a sufficient temperature to re-melt only core surface without destroying foam structure. 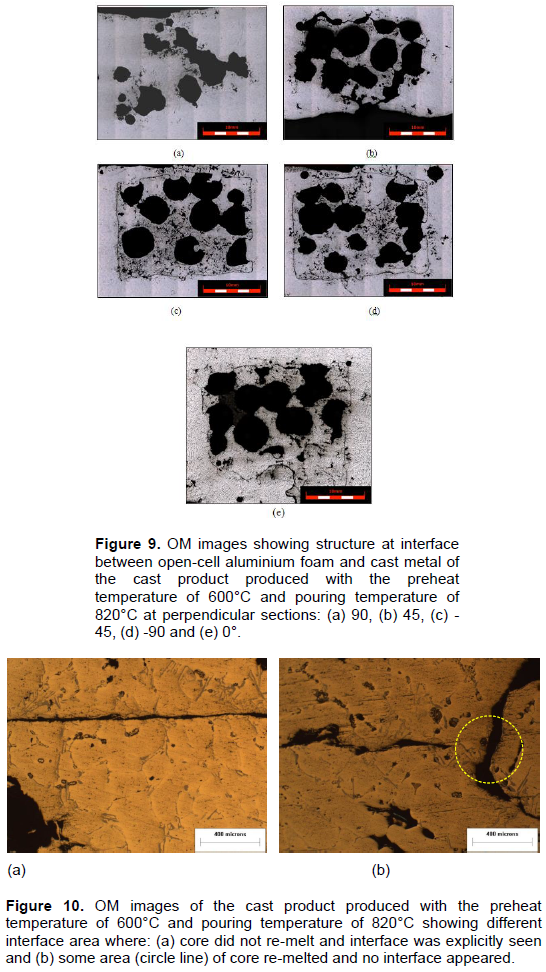 Open-cell aluminium foam was successfully used as a core for castings. The key success in metal casting implementation  of  the  open-cell  aluminium  foam   core without pore intrusion by cast metal is the direct utilisation of the pre-fabricated core without leaching template balls to a cast product mold. Only full infiltration of molten metal  into space  among  template  balls  is also required for the pre-fabricated core in order to prevent unwanted pore intrusion during casting of final cast product. The cores in this work were preheated at temperatures in the range of semi-solid state of metal component in order to gain continuum structure with cast metal. However, too high either preheat temperature or pouring temperature was found to exceed the limit of the core viability where the strength of the core is lower than the stress generated by the forces acting on the core. In order to obtain a good quality of casting with continuum structure, good mold design and suitable casting parameters are required to obtain an equilibrium temperature on the whole core surface and a sufficient temperature to re-melt only core surface without destroying foam structure.