Journal of
Clinical Medicine and Research

The number of children and adolescents living in Zambian residential care homes is approximately 2,500 (Department of Social Welfare Annual Report, 2009). Multiple risk factors such as poverty, broken homes, neglect, sexual and physical abuse, discontinued relationships, and genetic factors have an impact on the mental health of children and adolescents in residential and foster care (Richardson and Lelliot, 2003; Rutter, 1985; Newton, 1988). International prevalence rates for mental health problems/disorders in residential care for children and adolescents are estimated to be between 44 and 96%, with large studies reporting a prevalence of 60 to 70% (Schmid et al., 2008). In addition, research evidence  indicates  that  a  considerable  number  of  this group of children has multiple mental health problems/disorders (co-morbidity) and exhibit high levels of mental health needs and poorer functioning (McCann et al., 1996; Clark et al., 2005). In Zambia, however, research in the field of child mental health is limited. The few studies that have been conducted focus on mental illness or psychosis (Mayeya et al., 2004).

The foregoing analysis of previous research studies led to the formation of the hypothesis that children and young people with mental health problems are more vulnerable to predictability of psychiatric conditions.

This study was a cross-sectional survey which provided numeric or quantitative descriptions of mental health problems and needs amongst street children in residential care, with the resultant information being generalized to the population of this group of children. This study used a wide age range to enable the researcher capture different age groups of children and young people in care and to collect all the needed data at a single point in time, taking into consideration the fact that the study had a time limit.

A purposive sample of 74 children and young persons (68 males and 6 females) between the age of 7 and 17 was constructed from five different residential placements for street children in Lusaka. Information on the age of children was obtained from the registers in the identified centres. The number of females was smaller than that of males, because most of the centres visited mainly looked after male children. The researcher used purposive sampling, because some of the young persons were above 18 years and thus, could not qualify to part of the study, because they were not considered as children. The sample size was similar to that used in earlier studies (McCann et al., 1996; Mount et al., 2004; Stanley et al., 2005) and was considered adequate to reflect a range of mental health problems, while also fitting in the time-frame set for the research.

The centres were identified through the Lusaka District Social Welfare Office Directory for Child Care facilities. For each identified child, the key care worker [carer] (informant) most involved in delivery of care to the child was asked to complete a brief questionnaire  (Strengths  and  Difficulties  Questionnaire  [SDQ]) to measure the child’s mental health status.  In addition to the questionnaire that was completed by key carers, older children (11 to 17) were required to give a self report using a similar questionnaire, though the wording was slightly different in order to have more reliable information. The researcher administered the self-rated SDQ to the children who could not read.

This form was developed for the present study. This is a written information and consent form which stated the purpose of the study, the need for the participants’ involvement, what their participation would entail and issues pertaining to ethics and confidentiality. The form also elicited information that the respondents had agreed to be part of the study. Prior to the administration of all parameters, the willingness of the subjects to participate in the study was ascertained and they were made to sign the consent form.

SDQ (Goodman, 1997, 2001) was used to collect data on children’s behavioural and emotional problems resulting from stress levels in order to assess mental health and the levels of mental health need. SDQ is a brief behavioural questionnaire administered to parents/caregivers of 4 to 17 years old and to 11 to 17 years old themselves. It comprises 25 items (some positive others negative), with answers being rated on a 3-point scale. The SDQ provides total difficulties score (TDS) as well as 5 individual subscale scores of emotional problems, conduct problems, hyperactivity/inattention problems, peer relationship problems and pro-social behaviour. With the exception of the pro-social subscale, the sum of the other subscales generates the TDS.

Good reliability and validity of the SDQ has been well documented (Goodman, 1997, 1999, 2001; Goodman and Scott, 1999; Menon et al., 2008). Its limitations however have been found in its sensitivity in detecting specific phobias, separation anxiety and eating disorders, in comparison to individuals with conduct, hyperactivity and depressive disorders (Goodman, 2000).

The research gained ethical approval by the University of Zambia Research Ethics Committee. Informed written consent was obtained by all individuals participating in the study. Young people were debriefed and appreciated for their participation and cooperation and all the managers and staff (carers) that took part in the study for their contribution.

Anonymity codes were assigned to all participants to protect personal and organizational identity. All data obtained were kept under strict confidence. Questionnaires and consent forms were stored in a secured place.

The software, Statistical Package for Social Sciences (SPSS) was used to analyse quantitative data. Frequencies and percentages were used to describe the data, because the goal was to generalise the findings to a larger population of street children in residential care. Already existing computerised algorithms for predicting mental disorder were used to bring together information on symptoms and impact  from  the  completed  SDQs  (Goodman  et  al.,  2000).  The algorithms made separate predictions for three groups of disorders, namely, conduct-oppositional disorders, hyperactive/inattention disorders and anxiety-depressive disorders. Predictions of these three groups of disorders were combined to generate an overall prediction about the presence of a disorder. Correlation tests (Bivariate-Spearman Rank Order correlation and Partial Correlation) were used to test the research hypothesis, that is, children and young people with multiple mental problems (co-morbidity) have high levels of stress (mental health need). A partial correlation test was also performed to assess if age affected the relationship between co-morbidity and levels of stress.

SDQ was used to determine stress levels owing to the finding by Woodhead (2004) that children in a deplorable state are usually exposed to maltreatment and emotional abuse. This lack of nurturance and support from individuals who are normally expected to provide for them makes children develop distress which the SDQ infers from the manifestation of observed symptoms such as fear, loss of confidence, and feelings of worthlessness. 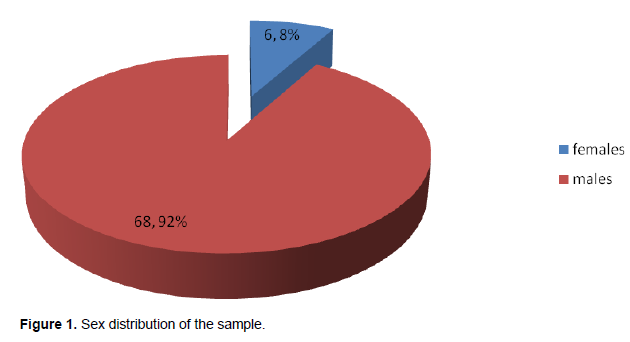 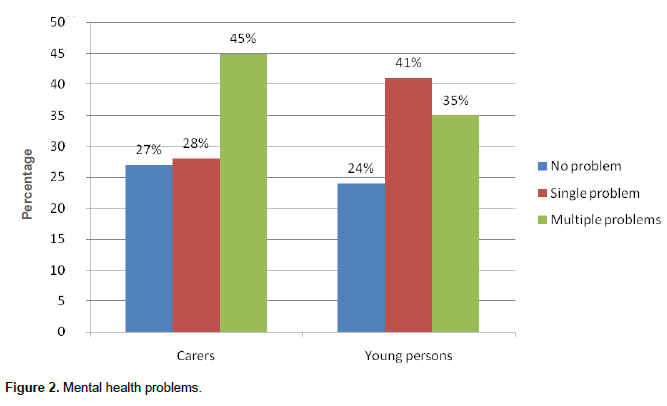 Overall, 74 children and adolescents in the current study had a mental health problem based on the report from the SDQ by at least one of the two informants, namely, the carer or young person. On the other hand, overall, 50.5% of the children and adolescent were diagnosed to be at risk of having a significant mental health disorder according to the SDQ prediction using the DSM-IV/ICD-10 diagnostic criteria. However, this prevalence rate for mental health problems was con-siderably high. The findings were in accordance with results obtained in previous studies (Meltzer et al., 2003; McCann et al., 1996; Clark et al., 2005; Schmid et al., 2008). Nonetheless, the results still probably represent an underestimate in one way, that is, internalizing disorders (such as depression or anxiety) may have gone undiagnosed in some of these instances when only a carer was interviewed as they may not be able to precisely describe the child’s emotions and cognitions.

The most frequent diagnoses amongst the children and young people in care were behavioural disorders (overall 39%) and emotional disorders (overall 21%). This finding was consistent with results from previous studies (Lindsey, 2000; Meltzer et al., 2003). Such mental health problems can manifest in various distressing behaviours, such as aggression, self harm, substance misuse, and other activity that compromises sexual health (Speciality Advisory Committee, 2002).

Similarly, there was a high rate of co-morbidity (overall 41%) amongst the group of children and young people which indicates significant levels of impairment. The finding (47%) from the carers responses was closer to Clark et al. (2005) estimate of 53% mental health levels for children and adolescents. Equally, striking was the low self reported mental health problems/disorders. Adolescents assessed themselves as having fewer problems than their carers did. To this effect, it is important to use a multi-informant approach in mental health studies if one is to yield reliable information.

According to Janssens and Deboutte (2010), assuming young people assess their mental health status using valid and reliable measurement instruments, it would mean that they disagree with their carers concerning their mental health problems. This had been previously described by Goodman et al. (1998). This would pose a challenge when it comes to referring the young people for professional mental health assistance, because there would be a high possibility that the child will not embrace the idea.

The study found a strong relationship between multiple mental health problems (co-morbidity) and levels of need amongst the children and young people in residential care. This finding is congruent to previous studies (McCann et al., 1996; Clark et al., 2005). The implication of the finding is that children and young with multiple and complex problems are at the apex of  professionals’ and carers’ concern and thus need more formal assessment for effective targeting of resources, along side exploration and development of appropriate interventions (Clark et al., 2005). The findings thus, stress the vulnerable mental status of street children in residential care and the need for additional support for professionals working with children as well as the children themselves.

STRENGTHS AND LIMITATIONS OF THIS STUDY

The findings have to be considered in the methodological strengths and limitations of the study. The sample was a representative of the street children in residential care in terms of age and placement. The response rate was very good as looked after children and adolescents have always been considered as a difficult group to study (Richardson and Lelliot, 2003). However, the study could not use the earlier proposed sample size of 100 children, that is, 20 from each identified institution, because four of the institutions identified had less than 20 children and young people except for one which had 42. In addition, young people above the age of 17 were not included in the study, thus lessening the sample size.

With regards to informants for the study, teachers were not included in the study, because not all the children were in school and in some instances, the carers were also the teachers to the children and young persons in residential care where some residential homes have community schools within the same premises. To this effect there was no possibility to cross validate the data with a teacher assessment. In addition, no mental health interview was conducted with the children for cross validation of the results.

Authors have none to declare.