Head and neck lipomas: A clinicopathologic analysis of 36 cases

Lipomas are common benign soft tissue tumors, with 15 to 20% of the cases affecting the head and neck region and 1 to 4% involving the oral cavity. The literature has many reported cases of head and neck lipoma but few comprehensive studies hence, the aim of this study was to review and analyze the clinical and histopathologic features of head and neck lipomas in Nigerians. A fifteen-year retrospective study evaluated thirty-six cases of head and neck lipomas among Nigerians. Head and neck lipomas constituted about one-tenth (9.4%) of the total body lipomas seen over the study period. The peak age incidence was fifth decade of life and most (58.3%) of these patients were older than 40 years. There was male gender predilection with male to female ratio of 1.4:1. The most common site of occurrence was forehead (41.7%), followed by scalp and cheek (16.7% each). Lipomas were seen in two intraoral locations (lip and tongue) and these accounted for 13.9% of the head and neck lipomas and 1.3% of lipomas in the whole body. The average size of the lesion was 3.3 cm. Head and neck lipomas are fairly common among Nigerians who are more than 40 years of age. While the conventional and fibrolipoma were the two histologic variants recorded, complete surgical excision of the lesion offered satisfactory treatment outcome.

Lipoma is a benign mesenchymal tumour composed of mature adipocytes often surrounded by a thin fibrous capsule according to the World Health Organization (Fletcher et al., 2013). It is the commonest soft tissue mesenchymal tumour, with about 15 to 20% affecting the head and neck region and 1 to 4% involving the oral cavity (Fletcher et al., 2013; Fanburg-Smith at al., 2009; Weiss and Goldblum, 2001). Lipomas may be seen in  all ages but are frequently observed in patients above 40 years of age with peak incidences at fifth and sixth decades of life (Neville et al., 2009; Ndukwe et al., 2003).

The aetiology is still unknown, however, trauma and obesity have been proposed as possible risk factors (Weiss and Goldblum, 2001; Neville et al., 2009; Dispenza et al., 2008). Despite the different metabolic activities, it is still not possible to  distinguish  lipoma from normal adipose tissue on microscopy. Lipoma presents mostly as a soft, painless, well-circumscribed, slow-growing subcutaneous or submucosal lesions, however when it occurs in deep tissue, it can present difficulty in diagnosis, requiring radiologic imaging (Neville et al., 2009; Ndukwe et al., 2003). Its clinical features depend on location which basically gives aesthetic concerns and sometimes functional impairments from pressure effects in head and neck region (Ethunandan et al., 2006).

Less than 5% of patients present with multiple lipomas termed lipomatosis which could be syndromic or sporadic (Tadisina et al., 2015).

The genetic and cytogenetic features of lipoma are well characterized. Chromosomal aberrations have been documented in 55 to 75% of lipomas with no clear and consistent correlation between clinical and cytogenetic data (Fanburg-Smith et al., 2009). Genetic studies may have diagnostic value in histologically challenging or borderline lipomatous lesions (Fregnani et al., 2003).

The differential diagnoses of lipoma include fibromas, granular cell tumor, mucocele, neurofibroma and traumatic fibroma (Fanburg-Smith et al., 2009; Weiss and Goldblum, 2001). Although, diagnosis of lipomas is usually based on clinical findings, diagnostic imaging such as ultrasound and magnetic resonance imaging are useful adjuncts (Zhong et al., 2004).

All histologically diagnosed cases of head and neck lipomas seen and treated between 2001 and 2015 at Obafemi Awolowo University Hospitals Complex, Ile-Ife, Nigeria were retrospectively reviewed. Demographic data, lesion site and size, and treatment offered were retrieved from patients’ records. Histopathology slides were retrieved, reviewed, reconfirmed and classified by the two pathologists among the authors based on current World Health Organization (WHO) classification (Fletcher et al., 2013). The study was conducted in accordance with “Helsinki Declaration” for human study. Data was analyzed using statistical package for the social sciences (SPSS) version 20.

During the 15-year period of review, head and neck lipomas constituted about one-tenth (36; 9.4%) of the histologically diagnosed lipomas from all regions of the body (383 cases). The mean age of the patients was 45.1±16.5 years (range: 15-75 years). There were 21 (58.3%) males and 15 (41.7%) females with male to female ratio of 1.4:1. Peak incidence was 5th decade of life (Table 1).  The most common site of occurrence was forehead (15; 41.7%), with scalp and cheek having the same number (6; 16.7%) of lipomatous lesions. Lipomas were seen in two intraoral locations (lip and tongue) and these accounted for 13.9% of the head and neck lipomas and 1.3% of lipomas in the whole body. None of the patients in this series had multiple lipomas. Distribution of anatomical sites of lipomas in head and neck region is shown in Table 2. 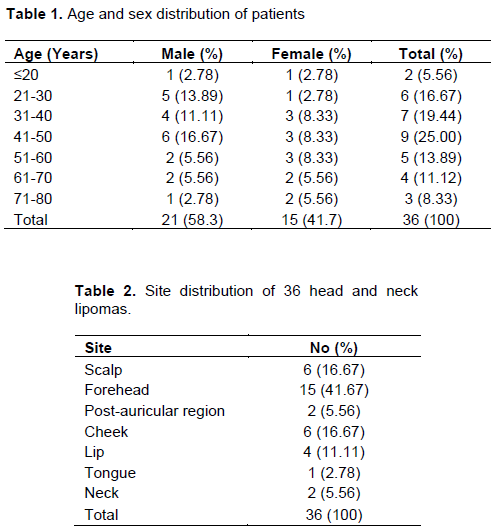 The size of the lesions ranged from 1.0 to 8.0 cm, with average size of 3.3 (±1.2 cm). Surgical excision was the treatment for all recorded cases with no recurrence after a follow-up period of between three and seven years. Conventional (17; 47.2%) and fibrolipoma (19; 52.8%) were the two histologic variants recorded (Table 3; Figure 1). None of the cases showed histologic features of secondary changes like fat necrosis, atrophy and hyalinization. 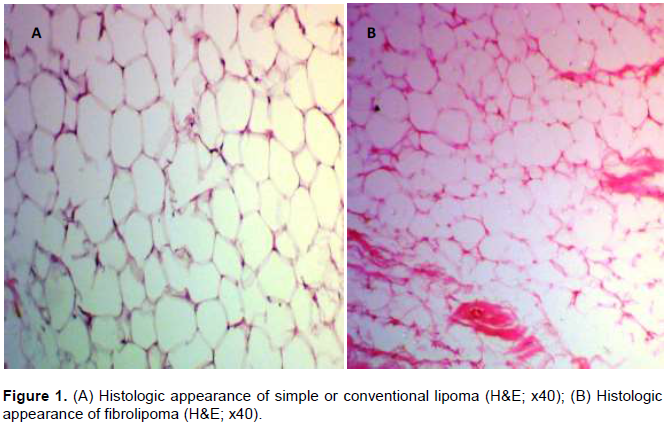 Lipomas are common, benign soft tissue tumors that may be seen in any part of the body where fat is normally present. The prevalence of 9.4% in the present study is much  lower  than  the  study conducted by Ndukwe et al. 2003 (17.6%). This may be due to underreporting, especially in asymptomatic individuals.

Lipomas have been reported (Neville et al., 2009; Ndukwe et  al.,  2003; Furlong et al., 2004) to be common  in adults, after the fourth decade of life and this is consistence with the findings of this study, with the peak age incidence of fifth decade of life and majority (58.3%) of these patients being older than 40 years. It is believed that fats begin to accumulate in inactive individuals with sedentary lifestyles at this stage of adulthood (Gnepp, 2009). One tumour occurred in pediatric patient (aged 15 years), corroborating the reports in literature that lipoma is an infrequent neoplasm in paediatric population (Furlong et al., 2004). There was male gender predilection with male to female ratio of 1.4:1. This is in agreement with Ndukwe et al. (2003) and Furlong et a. (2004), but a much lower male: female ratio (1.4:1) was recorded as against male: female ratio of 2:1 and 2.8:1 observed by Ndukwe et al. (2003) and Furlong et al. (2004), respectively. However, this value is closer to that of Som et al. (1986) who reported a male to female ratio of 1.1:1.

Forehead was the anatomical site with the highest number of lipoma in the present report, while parotid region and anterior lateral neck were the most common sites in the series of Furlong et al. (2004) and Ahuja et al. (1998). Unlike intraoral lipoma that is mostly found in buccal mucosa, there is no specific anatomic site of preference for head and neck lipomas in the literature (Neville et al., 2009; Furlong et al., 2004).

Microscopically, conventional lipoma is made up of lobules of mature adipocytes that are identical to adjacent normal adipose tissue. Many histological subtypes of lipoma have been described and these include fibrolipoma, angiolipoma, intramuscular (infiltrating) lipoma, spindle cell lipoma, osteolipoma, chondrolipoma, myxolipoma, pleomorphic lipoma and sialolipoma (Sakai et al., 2006; Bartuma et al., 2007). Several authors have reported conventional lipoma as the most prevalent microscopic variant, with fibrolipoma being the least common variants (Ndukwe et al., 2003; Furlong et al., 2004). This trend was reversed in the present study, with 19 (52.8%) cases of fibrolipoma and 17 (47.2%) conventional lipomas. Conventional lipoma was common among the 41 to 50 years age group, while the 31 to 40 year age group recorded more fibrolipoma. This is in agreement with the findings of Osterne et al. (2019) who observed conventional lipoma to be common in the sixth decade of life and predominance of fibrolipoma in the fifth decade. Surgical excision as treatment option for lipoma was found to be effective with good prognosis. Some authors (Constantinidis et al., 2003; Copeland-Halperin et al., 2015) have reported better outcome with combination of liposuction and surgical excision (lipectomy) for large lipomas that is greater than 5 cm.

Head and neck lipomas are fairly common among Nigerians who are more than 40 years of age. The conventional and fibrolipoma were the two histologic variants recorded and complete surgical excision of the lesion offered satisfactory treatment outcome.