There is growing interest in using natural substances from plants to potentially enhance anticancer activity. A key target in this respect is natural killer (NK) cells in order to generate an anticancer-immune response. Luteolin used in this study was derived from a local plant Brucea javanica leaves extract; through a bioassay-guided fractionation. The expression of interleukin-2 (IL-2) and interferon-γ (IFN-γ) was increased after 20 h treatment of 0.1 µM luteolin in human mixed lymphocytes, which reflects the activation of NK cells. This was further confirmed in co-culture experiments. NK cell-induced K562 target cell death was increased in the presence of luteolin. These results show that luteolin activates NK cells to kill target cells indicating the potential use of luteolin as an anticancer immunostimulant.

Immunotherapeutic agents have become an important addition to the list of anticancer treatments. Some types of natural products have the ability to stimulate the immune system such as a potent stimulator of natural killer (NK) cells (Abuharfeil et al., 2000; Amino et al., 1983; Toliopoulos et al., 2012). NK cells are one of the components of the innate immune system which have the ability to directly kill the malignant, damaged and virally infected cells, by the release of perforin and granzyme (Geller and Miller, 2011).  Activated  NK  cells  are  potent anti-tumor effector cells and play an important role in immunosurveillance (Rabinowich et al., 1991). The lytic activity of NK cells can be augmented by exposure to interferons (Kuribayashi et al., 1981) and interleukin-2 (IL-2) (Devos et al., 1984).

Brucea javanica (L.) Merr. is a shrub from family Simaroubaceae and it is known as ‘lada pahit’ among Malaysian due to its bitter taste. Compounds from B. javanica have been shown to have various biological activities such as cytotoxic and antileukemic (Anderson et al., 1991; Luyengi et al., 1996). Luteolin belongs to flavones type (flavonoids) of polyphenolic group of compounds. Epidemiological studies have consistently shown that flavonoids might play a prominent role in cancer prevention, since these compounds are found in numerous plants that are associated with a reduced cancer rate (Birt et al., 2001). However, very little information is available on the ability of these compounds to modulate anticancer immune activities. Thus, in this present study we have evaluated the effects of luteolin on NK cell responses which are known to modulate target-cell killing activity.

K562 target cells were purchased from American Type Cell Culture (ATCC) and maintained in a humidified atmosphere of 5% CO2 incubator at 37°C. All culturing work was handled using sterile techniques.

The effects of luteolin on the expression of IL-2 and interferon-γ (IFN-γ) were measured via Enzyme-Linked Immunosorbent Assay (ELISA). 0.1 µg/ml of phytohemagglutinin (PHA) was used as a stimulator because it can stimulate an increase in both IL-2 and IFN-γ production. The range of concentrations of luteolin used was 0 to 100 µM and the cells were incubated for 24 h. The level of IL-2 and IFN-γ were measured from the medium (supernatant) of the mixed lymphocytes culture. The experiment was carried out according to the manufacturer’s protocol (BioSource CytoSetTM, Invitrogen).

The isolation of NK cells was achieved using a human CD56+CD8+/CD8Ë‰ NK cell isolation kit from Miltenyi Biotec, according to the manufacturer’s protocol. Briefly, lymphocytes were isolated from human peripheral blood mononuclear cells (PBMCs), and were magnetically labelled with a cocktail of biotin-conjugated antibodies against lineage-specific antigens and a cocktail of MicroBeads. Upon subsequent magnetic separations of cells over a MACS® Column (LS Column) that was placed in a magnetic field of a MACS Separator, the magnetically labelled non-NK cells (T cells, B cells and other debris) were retained within the column, while the unlabelled (untouched) NK cells were eluted.

The NK cells were cultured together with the human myeloid leukaemia K562 cells, in Eppendorf tubes for 3 h (37°C, 5% CO2, 100% humidity). The best concentration of luteolin that enhanced the production of IL-2 in mixed lymphocytes was used in the co-culture assay. After 3 h, cells were washed with phosphate buffered saline (PBS) and then blocked with 5% mouse serum in PBS  for 10 min at room temperature (RT). Cells were washed again and stained with 20 µl of anti-CD56 FITC-labelled antibody for each tube, then incubated at RT. After 15 min, the cells were washed and 5 µl of 7-aminoactinomycin D (7-AAD) was added, then incubated for 10 min at RT. The cells were then washed and resuspended in 200 µl of PBS. The percentage of K562 cell death was determined by flow cytometric analysis. BD fluorescence-activated cell sorting (FACS) Diva software was used to evaluate the 7-AAD staining to indicate non-viable K562 cells and was gated specifically to exclude the fluorescein isothiocyanate (FITC, CD56+) labelled cells.

The percentage of K562 cell death was found to be increased in the presence of both NK cells and luteolin as compared to cultures of K562 with NK cells or luteolin alone (Figure 2). 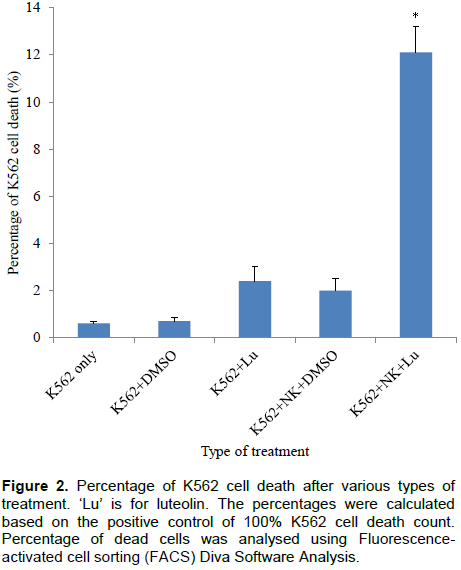 The removal of cancer cells by the host immune response has long been considered as the most advantageous anticancer strategy. This is because our immune systems have highly specific recognition mechanism which would potentially eradicate cancerous cells with the least damage to normal cells (Wahle et al., 2010). The enhancement of immune cell responses that can specifically target cancer cells could prove to be very effective for prevention and treatment strategies. Therefore, any agents that enhance anti-tumour effector cell activities have naturally been perceived as an ideal mechanism in cancer treatment and prevention (Wahle et al., 2010).

In this study, luteolin was demonstrated to activate NK cells. Luteolin stimulated an increased production of both IL-2 expression and IFNγ. An enhancement of the killing of K562 leukemic cells was also shown. Direct evidence for NK cell targeting of human cancer came from studies of NK cell interactions with primary tumour cells tested for susceptibility to NK cell-mediated lysis ex-vivo. Such approaches have been taken for neuroblastoma, ovarian carcinoma and multiple myeloma (Carlsten et al., 2007; Castriconi et al., 2004; El-Sherbiny et al., 2007).

However, the effect of luteolin on NK cell stimulation in this study has limitations, because there are many more factors that must be considered; which are recommended for future study. NK cells can kill cancer cells either by lysis or apoptosis. In lysis process, the perforin and granzyme was secreted by NK cells, which can create pores on the target cell’s membrane and leads to lysis of target cells. On the other hand, death receptor pathway of apoptosis is triggered when the Fas ligand on the surface of NK cells bind to Fas molecules on the surface of target cells (Vivier et al., 2012). Therefore, further studies are still needed, considering other factors such as evaluation other cytokines expression, the use of other stimulators for NK cells, type of cell death occurred in K562, as well as the expression of NF-Ä¸B transcription factor, perforin, granzyme and comparison between NK cells from healthy individuals and cancer

Evidence in the literatures suggest that plant-derived medicines influence important biological effects on the immune system. Identification of such immunomodulatory properties in luteolin will be crucial in the discovery of novel, clinically relevant compounds for enhancing existing immunotherapy for cancer. Taken together, the therapeutic activity of luteolin holds the potential to be a safer anticancer treatment in the future.

The authors thank Dr. Jillian Davidson, Professor Alexander I. Gray and Dr. John Igoli from SIPBS, University of Strathclyde for their kind guidance in the study. The authors also appreciate the Scottish National Blood Transfusion Service (and the donors) for kindly providing blood. This study was funded by the Universiti Sains Malaysia Short Term Grant (304/PPSK/6131538).