The economic analysis of a manual and automatic turning hot spring incubator developed at the University of the Philippines-Los BaÅˆos, Laguna Province, Philippines, was studied by comparing its performance with the conventional electrical incubator. This research can help small-scale farmers by reducing operational cost and increasing profitability. To determine the feasibility, undiscounted and discounted measures were used. For undiscounted measures, the break-even point (BEP) and payback period (PBP) for the conventional electrical incubator, manual and automatic turning hot spring incubator were  2788, 1950 and 4552 balut; and 2.31, 0.751 and 1.755 years for balut production; 723, 660 and 1540 ducklings; and 1.852, 0.856 and 1.998 years for duckling production, respectively. For the discounted measures, benefit-cost ratio (BCR), net present value and internal rate of return (IRR) for the conventional electricity incubator were 1.07, 1.36 and 1.20; â‚±4176.88, â‚±34359.81 and â‚±22357.39; and 7.16, 36.44 and 20.35, respectively, for balut production and 1.15, 1.44 and 1.16; â‚±6264.42, â‚±28320.29 and â‚±12740.51; and 15.15, 43.78 and 15.88, for ducklings production, respectively. Finally, the outcome of this research can be adopted by balut producers that have access to hot spring. The hot spring manual turning incubator was the most feasible incubator for balut production than the conventional incubator.
Key words: Hot spring incubator, conventional, manual, automatic, ducklings, economic analysis, balut.

At present, there are more than 1.3 billion people worldwide that do not have access to electricity and most of them are concentrated in Africa and Southern Asia (Fontaine et al., 2016). Due to the unequal demand and supply of electricity, people are finding alternative means of energy source. However, geothermal energy is free and environment friendly source of thermal energy. The geothermal energy is already in the form of heat. It can be used as alternative source of heat in agricultural and industrial processes. One of the agricultural applications of heat is incubation of poultry eggs. About 80% of the total duck production in the world is concentrated in Asia (Chang et al., 2006). The ducks are raised alongside rice farming and fish farming in Asia. In Laguna Province, ducks are raised in the range of 800 to 45,000 heads (Atienza et al., 2015). In the Philippines, the duck industry is dominated by balut (partially hatched embryos) production and by smallholder production that accounts for more than 75% of total duck output (Dagaas and Chang, 2004). Balut is fertilized duck egg that has been incubated for a period of 14 to 18 days then steamed or cooked for about 20-30 min for human consumption (Magat, 2015).
These duck eggs are usually incubated in conventional electrical incubators. With the demand and availability of electricity, balut producers are faced with a problem of continuous electricity By the end of the first quarter of the 21th century, the supply of oil will reach its peak and will begin to decline as predicted by energy experts. The increase in the demand and reduction in the supply will lead to a significant increase in the price of oil (Fanchi, 2005). Diversification of fuel sources is imperative to address the energy security, climate change and sustainable development issues; therefore, it is essential to address the energy crisis through the extensive utilization of abundant renewable energy resources, such as biomass, biogas, wind, hydro, solar and geothermal energy (Bhutto et al., 2011). Geothermal energy is the energy contained as heat in the Earth’s interior (Barbier, 2002). It energy refers to the heat within the Earth that generates geological phenomena on a planetary scale (Dickson et al., 2013). Geothermal energy is one of the oldest, most versatile and also most common form of utilization of renewable energy (Abbas et al., 2014).
Los BaÅˆos City is located between the northern part of  Mt. Makiling and north shore of Laguna de Bay. It is in Laguna Province, Philippines. In the province of Laguna, which is located in Luzon Island, Philippines, tourism development is expected to increase the demand for groundwater resources. Los BaÅˆos lacks major commercial core. In 2014, there were 42 hot spring resorts registered in Los BaÅˆos. Because of the hot spring resorts, Los BaÅˆos is also recognized as a tourist destination. Mostly, the hot springs found were located in the barangays (villages) of Lalakay, Tadlac, Bambang and Baybayin. Groundwater is significant for domestic, commercial and industrial uses in urban and rural development. Groundwater is often tapped as water supply because of its quality, reducing the costs of treatment as compared to surface water sources and its reliability, especially during drought or extended dry periods (Jago-on et al., 2017).
By replacing the electrical heater with hot spring heat exchanger, the operational cost of the hot spring incubator (manual and automatic turning) was less than the conventional electricity incubator (locally manufactured in the Philippines). The hot spring heated the air through a heat exchanger and maintained optimum incubating temperature within the incubator. This research addressed issues such as replacing conventional source of energy with non-conventional, renewable or alternative source. The non-conventional, renewable or alternative source of heat lowered the operational cost of incubating duck eggs which increases the profits of small scale farmers in Los BaÅˆos, Laguna, Philippines. This deemed it necessary to test and evaluate the economic feasibility of a small scale hot spring incubator (Figure 1) and compared the manual and automatic turning hot spring incubator with the conventional electricity incubator. 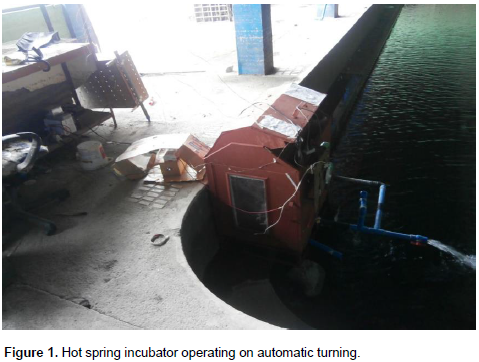 Experimental set-up
A potential site was located and tested to obtain the conditions of the site such as the flow rate of the hot spring to the surface, temperature of the hot spring, ambient temperature and the wet bulb temperature. The potential site selected was located at Baranggay Malinta, Los Baños with coordinates 14° 10’ 55.91” N and 121° 13’ 36.49” E. The small-scale hot spring incubator (manual and automatic turning) with capacity of 165 duck eggs was designed, tested and evaluated for economic feasibility for balut and duckling production in Los BaÅˆos, Laguan Province, Philippines. Economic analysis of the hot spring incubator was evaluated on two settings: (a) manual turning hot spring incubator and (b) automatic turning hot spring incubator. These two settings of the hot spring incubator were compared with the (c) conventional electrical incubator which was locally manufactured in the Los BaÅˆos area.
Separate test was conducted at a local balutan (a place where baluts are produced) to compare the performance of the conventional incubator with the hot spring incubator at two different settings (manual and automatic turning).  The test consists of three replicate and sampling on the candling of duck eggs in the incubator including the entire population. All the duck eggs in the incubator were first candled to evaluate the fertile and infertile three days after being placed in the incubator. The second candling was 19 days after the duck eggs were placed in the incubator to evaluate the balut, penoy and dead egg embryos (balutability). For the hatchability, the hatched and unhatched eggs were evaluated 28 days after incubation. The test and evaluation on the performance was based on the data collected on the total number of fertile eggs, balut incubated, penoy, dead egg embryos and duck eggs hatched.
Descriptive statistics was used to determine the mean, maximum and minimum of the performance parameter. The parameters for evaluate were fertility duck eggs used for the experiment, balutability and hatchability. The economic analysis for the feasibility of the research was also conducted using undiscounted (break-even point-BEP and the payback period-PBP) and discounted measure (benefit-cost ratio-BCR, net present value-NPV and internal rate of return-IRR) to select the most feasible incubator for balut and duckling production in Los BaÅˆos, Laguna Province, Republic of the Philippines. The assumptions, rates and prices were based on the actual setting of the research samples which were collected from duck framers, actual transportation cost, rates and the local market in Los BaÅˆos.
Parameters of evaluation
Balutability: Balutibility is the percentage of number of fertile eggs to successfully incubate for the period of the 18 day period divided by the number of fertile eggs. The fertile eggs were the eggs which embryo developed at three days after placing in the incubator at first candling. The equation used for the computation of the balutability as described by was:

Electricity consumed = final reading - initial reading              (4)
Electricity consumed per day is amount of electricity consumed in a day (24 h) in kW/day.
Economic analysis
The economic analysis took into consideration, the estimated cost of the hot spring incubator when on automatic set-up and manual set-up. The results of the balutability, hatchability and electrical consumption of the incubator were used to analyze the feasibility of the study by comparing the hot spring incubator with the conventional incubator. The economic analysis also took into consideration, the actual prices in the market at the time of the study. The economic analyses used were break-even point (BEP) and payback period (PBP) for undiscounted measure and benefit-cost ratio (BCR) and internal rate of return (IRR) for discounted measure.
Undiscounted measures incubators worth
1. Break-even point: The break-even point is the point where neither profit nor loss is incurred. The incubator with the lowest break-even point was selected as the best (Resurreccion et al., 2006).
Annual fixed cost + unit available cost (x) = unit benefit              (5)
Where x is the number of units for break-even point.
2. Payback period: The payback period is the period for recovering the initial investment cost plus the operation cost or the initial investment divided by the average annual net benefits. The incubator with the shortest payback period is the preferred (Resurreccion et al., 2006).

Feasibility using undiscounted measures
The economic analysis of the conventional, manual turning and automatic turning hot spring water fed incubator at the break-even points were at 2788, 1950 and 4552 balut when used for balut production and 723, 660 and 1540 ducklings when used for hatching, while the payback period were 2.313, 0.751 and 1.755 years for balut production and 1.852, 0.856 and 1.988 years for duckling production, respectively, as shown in Table 3. When comparing the manual and automatic turning hot spring water fed incubator with the conventional incubator economically, it is clear that the hot spring manual turning incubator is the best of the three incubators since it is has the lowest break even and the shortest payback period.

Feasibility using discounted measures
The discounted measure is the most reliable because it is a function of three components: (a) a risk free rate, (b) a general risk premium covering both equity risk and industry risk, and (c) a factor for company-specific risk (Larrabee and Voss, 2012). For feasibility of the discounted measures (benefit cost ratio and the internal rate return) used, the rate on agricultural loan was considered. The interest rate was 21%. All otherassumptions were similar to that of the undiscounted measures. The estimated life of the conventional electricity incubator and the hot spring incubator (manual turning and automatic turning) was five (5) years. No labor was taken into consideration, because the research focus on small scale farmers and all values in Table 5 are present value. For the benefit-cost ratio (BCR) of balut production, the conventional electricity incubator, manual and the automatic turning hot spring incubators were 1.07; 1.36 and 1.20, while the BCR for duckling production were 1.15; 1.44 and 1.16, respectively. The BCR showed that all the incubators are feasible since BRC≥1. The maximum BCR for balut and duckling production were 1.36 and 1.44, respectively, for the manual turning hot spring incubator for duck eggs.

The authors thank the Ministry of Agriculture, Republic of Liberia; the Agricultural Sector Rehabilitation Program (ASRP) in Liberia for funding this research. They also extend their thanks to the University of the Philippines-Los BaÅˆos (UPLB) and finally, the Central Agricultural Research Institute (CARI).