One of the most important facets of off-farm activities is providing employment opportunities and additional income for rural households and thereby accommodates the seasonal and fluctuating agricultural production. Given this, identifying the underlying determinants of off-farm participation and its impact on crop yield was found to be of the essence. Cross sectional data was collected through structured questionnaire administered on 384 randomly selected farmers. Descriptive statistics, probit and Ordinary Least Square (OLS) models as well as t and chi-square tests were used to analyze the data. The regression result revealed that off-farm participation was positively influenced by gender, education, working people, number of pack animals and credit access; while age and land size carried a negative sign. Off-farm participation was also found to have a negative and statistically significant impact on crop yield where non-participants were better producers; since majority of off-farm participants participate only on food-for-work which has nothing to add for crop yield rather than compromising farm activities. Hence, training on non-farm activities need to be given; the current adult education, being propagating, need to be strengthened; and there is a need to solve liquidity problem through credit access that could serve as startup capital.

Site selection, sampling method and data collection
As far as the study area selection was concerned, compared with the rest districts of Southern zone, Raya-Azobo and Raya-Alamata are more of promising and lucrative with plenty resource reservations basically fertile land resource, ground water, flat plain land supported by runoff rain water from the surrounding hilly parts. Despite these endowments, since production is decreasing, these districts were reported to face recurrent drought and food insecurity; and the society is been engaged  in  off-farm  activities  basically  tocurtail the food shortage. As a result of this researchers were intended to have a look on the impact of off-farm activities participation on crop yield.
Multi-stage sampling procedure was followed to reach on to final respondents. Firstly, Raya-Azebo and Raya-Alamata districts were selected from Southern Tigray; followed by the randomly selected four sub-districts, Bala-Ulaga, Kukufito, Lemeat and Tao. Thirdly, on the basis of Yamanes’ sample size determination formula, as cited in Israel (1992), 384 sample respondents were calculated. Finally, 384 respondents were randomly selected from the list provided from each sub-district, as its proportion is shown in Table 1 and these people were considered to collect primary data mainly through structured questionnaire in 2014 cropping year. In-depth interview with crop production personnel and farmers who were on the verge to leave agriculture were interviewed. Besides, four focus group discussions with off-farm participants and non-participants, including female participants, were held to support the questionnaire based data. Interviewees and focus group discussants were selected purposively with the assumption that these people could provide us with tangible and pertinent information in the ground.

Socio-economic and demographic characteristics of sample households
Examining farm households’ socio-economic and demo-graphic characteristics is believed to be an important indicator for probability of off-farm participation in such a way that farm households can be determined with. As a result of this, an attempt has been made to describe some socio-economic and demographic characteristics where differences between participants and non-participants were tested using t and Chi-square tests.
Table 3 clearly purports that majority of the sample respondents (73.44%) were off-farm participants. In line with this rate of participation, majority of participants (78%) were male headed households supported with a significant Chi-square test result. Compared with non-participants, participants were male headed households, younger in age, educationally better, large in number of working people, wealthier in pack animals possessed and farm income and then with better credit access. On the other hand, non-participants were owners of large arable land size and better crop producers. These all differences were supported with significant t and Chi-square tests for continuous and dummy variables, respectively. 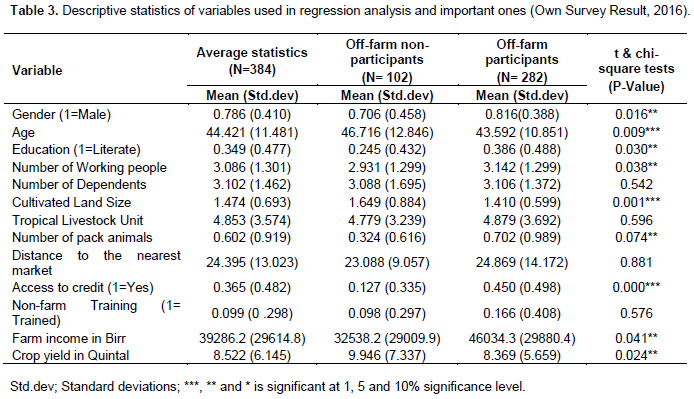 Types of off-farm activities vis-à-vis place of work
Types of off-farm activities along with place of work were discussed in Table 4.
As it can be seen in Table 4, 65.6% of the total off-farm participants were engaged in food-for-work under the umbrella of Productive Safety Net Program (PSNP). These people were paid employees where one person was expected to do five days per month and will be awarded birr 19 in cash and 3 kg (0.03 quintal) in food/kind. As far as place of work was concerned, 76.95% of off-farm participants have been doing with in their respective sub-districts. To engage in food-for-work and transacting goat, sheep and cereals by buying and selling on market day time mainly on weekly and monthly basis, farmers were not forced to go out of their residence and thereby lose their social tie and family kinship.
Table 4 further reveal that, 67.02% of the total participants were instigated to participate due to the advent of and access to PSNP; followed by their residences’ proximity to urban area that is believed to expose them to new and updated information as well as market identification mainly for petty trading activities like trading egg, coffee, honey, selling local beer (ale) and using cart.
Table 4 also indicated that, more than 57.84% of non- participants were seriously inhibited by absence and the resultant farness of off-farm opportunities coupled with shortage of startup capital. Had there been off-farm opportunities, they would not have been exploited opportunities due largely to shortage of startup capital. From this one can infer that, farm respondents were highly intended to do activities that requires startup capital like trading camel-the then costly animal being transacted and trading cereals across different regions. On the other hand, opportunities’ farness highlights that, respondents were intended to do off-farm activities without compromising their farm activities, their family’s love, affection and social ties. 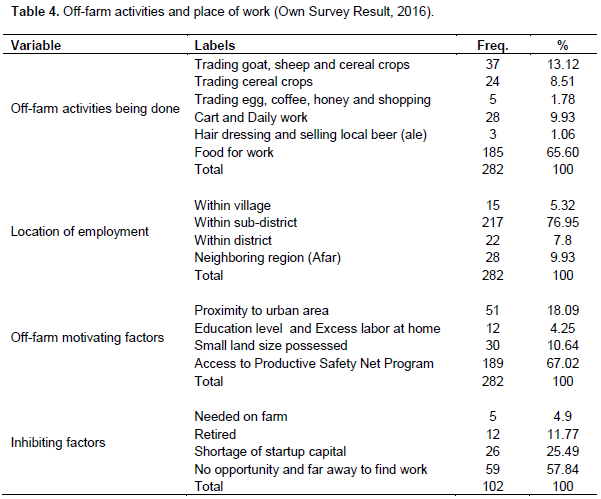 Estimation results of probit regression model
Before rushing to regression result display, pair-wise correlation matrix and the Brush Pagan test were used to test the problem of multicollinearity and hetroscedasticity, respectively (Table 5). 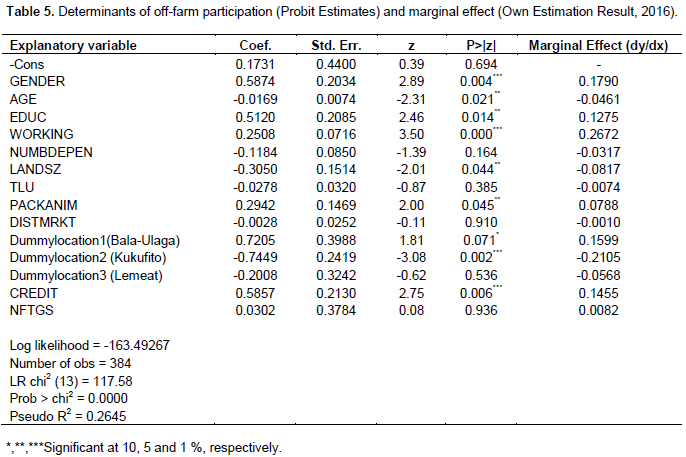 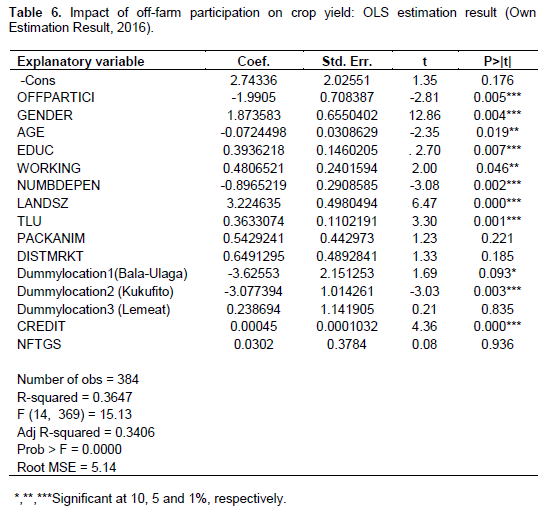 One of the most important facets of off-farm activities is providing employment opportunities and additional income for rural households more particularly during the slack time. Besides, off-farm participation has a multifaceted effect on agricultural production in such a way that it paves the way for ease access of inputs and on the other hand it negatively shares the time to be allocated for farm activities. By and large, it is one of the best means of risk minimization. This research paper has tried to examine the underlying determinants of off-farm participation and the impact of participation on crop yield in Tigray region, Ethiopia. The probit regression result revealed that off-farm participation was positively influenced by gender, education, working people, number of pack animals, credit access and dummy location one, while age, land size and dummy location two influenced off-farm participation negatively. In a nut shell, even though some people do participate in off-farm activities on the basis of their internal motivation or demand driven, majorly a push driven participation has been investigated. Ordinary Least Square (OLS) regression result revealed that off-farm participation has a negative and statistically significant impact on crop yield where off-farm non-participants were found to be better producers unlike their counter parts.
Without the shadow of doubt, instigating off-farm participation is the only way-out and the sole alternative that smallholder farmers need to follow basically to accommodate their seasonal and fluctuating agricultural production. In doing so, an inclusive non-farm activities training need to be given for the community like on weaving, leather and leather products training like shoe and mat making, leather strap; carpentry and some other activities. Hence, investment on human resource actually on to education is highly required (both short-term and long-term trainings). The current adult education, being propagating, need to be strengthened since literate households (those who simply can read and write) were found to be better participants unlike illiterate farmers. On the other hand, access to credit need to be propagated basically to solve liquidity problems and thereby serve as off-farm startup capital.