This study is set to examine the possibility of maximizing the returns of Egyptian vegetable exports: fresh potatoes, onions, and tomatoes, through the optimal distribution of exports to international markets. Linear programming model is formulated to determine the optimal distribution of exports among the importing countries. This model is restricted by export capacity, import capacity, and suggested organization constraints, determining the optimal plan for various scenarios. The mathematical analysis is based on secondary data from the Central Agency for Public Mobilization and Statistics of Egypt and the United Nations Comrade Database for the period of 2010- 2014. The model solution is obtained using the General Algebraic Modeling System (GAMS). The results show that the major export markets for Egyptian potatoes are Russia, Italy, and Germany, representing altogather about 69% of Egyptian exports. For Egyptian onions, Saudi Arabia, Kuwait, Jordan, and Syria together accounted for 77% of the total exported quantity. For Egyptian tomato exports, Syria, Saudi Arabia, Libya, and Iraq accounted for 85% of the total tomatoes exports from Egypt. The results of the various scenarios showed that there is a prospect to increase the Egyptian export returns through geographical re-distribution of exports from potatoes, onions, and tomatoes. Under the capacity of export-import constraints (Scenario No. 1), the total export value would increase by 19.26, 33.95 and 45.30% for potatoes, onions, and tomatoes, respectively. Under countries group constraint (Scenario No. 2), the export value increases by 12.67, 26.49 and 35.85% for these crops, respectively, more than the current export values. Under the suggested model (Scenario No. 3), the export value would increase by 9.56, 25.45 and 25.26% for potatoes, onions, and tomatoes respectively, much more than the current values of exports. Egyptian exports of potatoes would be directed to many countries: the United Kingdom, Greece, Italy and Russia. For onions, higher quantities would be exported to Saudi Arabia, Kuwait, Belgium, and Romania. The most important export markets for Egyptian tomatoes would be Iraq, Italy, Syria, and Saudi Arabia. The study recommends to re-distribute the Egyptian exports of vegetable crops in the international markets to maximize export returns. These models can be used as a tool for the Egyptian decision makers about optimum export distribution for export development.

The Egyptian exports play an important role in economic development especially agricultural exports. Agricultural exports are one of the most important sources to increase the foreign currency. Thus, it is necessary to focus on promoting Egyptian agricultural exports. It is thereby one of the most important  pillars  of  the economy that help to overcome trade balance deficit. Agricultural exports constitute a proportion of Egyptian total exports, representing about 10.60% of the total exports during the period 2001-2014 (FAOSTAT, 2017). The export of potatoes, onions, and tomatoes is the most important vegetable exports. Therefore, increasing the value of vegetable exports have a significant impact on agricultural export and economic development. Hence, maximizing the return of agricultural export in general and vegetable export in particular is one of the important cornerstone of development.
The total vegetable exports value accounted for USD 969 million representing about 24% of Egypt's agricultural export value as average of the period of 2010 - 2014. Potatoes, onions, and tomatoes export values reached about USD 305, 194, and 43 million representing 31.40, 20.05 and 4.44%, respectively, of the total vegetable export value (UN Comtrade 2016). Despite the low contribution of tomatoes export value in total vegetable export value, its importance comes from the fact of being one of the most essential food commodities as well as acting as a safeguard for many health problem. It is important to understand the actual and optimal distribution patterns of marketed crops to international markets in order to promote Egyptian agricultural exports.
Although Egypt has a comparative advantage in producing vegetable crops, the exporting sector is facing many constraints that are associated with many importing countries differing in export prices and the importing capacity.
Egyptian vegetable exports are spread among more than 25 importing countries in the world, especially for potatoes, tomatoes, and onions. In addition, the fluctuation in exported quantities is resulted in losing Egypt's market share in favor of competing countries. This requires a review of the geographical distribution of vegetable export in different world markets to ensure a share of Egyptian vegetables and maximize the return on export of the same quantity. This needs determining the optimal geographic distribution of vegetables exports especially the most important crops potatoes, tomatoes and onions.
This study mainly aims at optimizing the returns of vegetable export in the importing markets in order to increase the export earnings of Egypt. Specifically, there are three aims to reach. First, understanding the current geographical distribution of export of the most important vegetable crops: fresh potatoes, onions and tomatoes. Second, developing an optimization model to ensure the optimal distribution of export for these crops, and re-distributing of exports for potatoes, onions and tomatoes in   different   foreign  markets  to  increase  the  Egyptian export earnings. This model is to serve as a tool for policy makers of planning in export development. To reach the objective of this study, first is a presentation of the methodology and data with special emphasis on the mathematical model formulation. This is followed by the model results and discussions, along with the overall recommendations.

Model specification
The study depends on the descriptive and quantitative methods, using linear programming model to determine the optimal distribution pattern of vegetable exports. Linear Programming (LP) is a mathematical technique used in computer modeling to find the best or optimal solution to resource allocation problems. LP model is a well suited for this study because of the following reasons: (a) many activities and restrictions can be considered at the same time,(b) an explicit and efficient optimum seeking procedure is provided, (c) with a once-formulated model, results from changing variables can easily be calculated, (d) the policy instruments can be incorporated by means of additional or modified activities in the models (Hazell and Norton, 1986). The main components of any constrained LP problem are (Hillier and Lieberman, 2009): 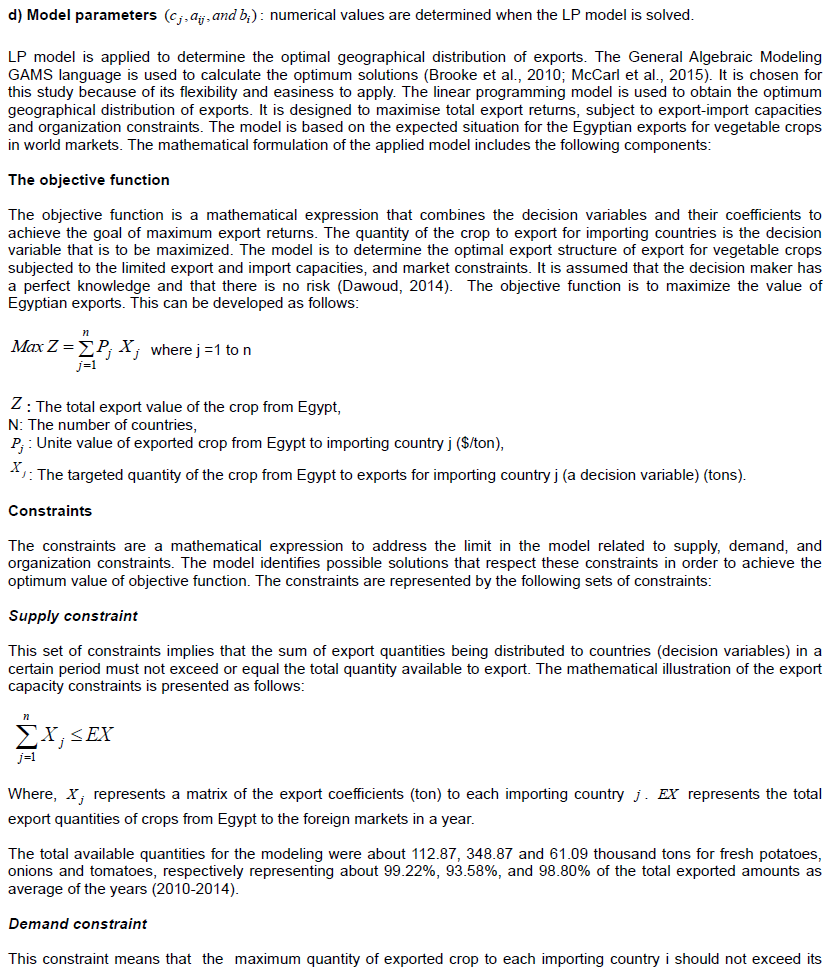 total imported capacity of the country. Assuming that there is no demand increase during a year, demand constraints can be written as: 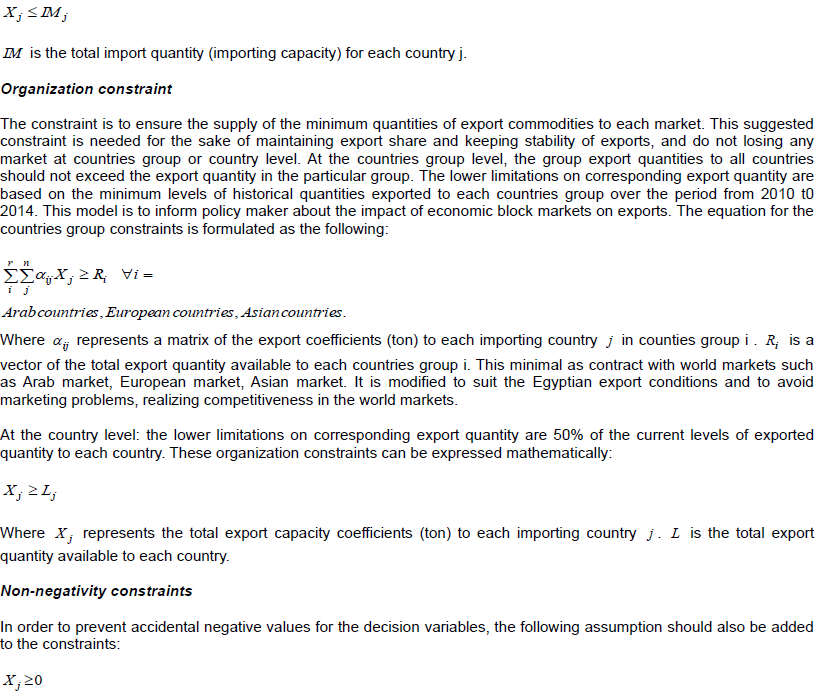 Data source
This study is based on data from the Central Agency for Public Mobilization and Statistics (CAPMAS, Unpublished), the National Centre for Information, Egypt, and the United Nations Commodity Trade Database (UN COMTRADE) along with other data and references related to the subject of this study from the internet. For modeling optimization problems the General Algebraic Modeling System (GAMS) is designed (Brooke et al., 2010). Data are entered in familiar list using GAMS. Models are presented in algebraic statements that are easy to read. In the mathematical analysis, the selection of the countries is based on the relative importance of geographical distribution during the period 2010-2014.
Current distribution of Egyptian vegetable exports to international markets
Here presents the current geographical distribution for Egyptian exports of vegetable crops. The current study focuses on exported quantities from fresh or chilled potato, onion, and tomato crops. The exports of these crops are delivered to more than 25 countries in the world. Appendix Table A.1 in the Appendix shows the composition of Egyptian exported crops by importing countries and regions over the period 2010-2014, as follows. 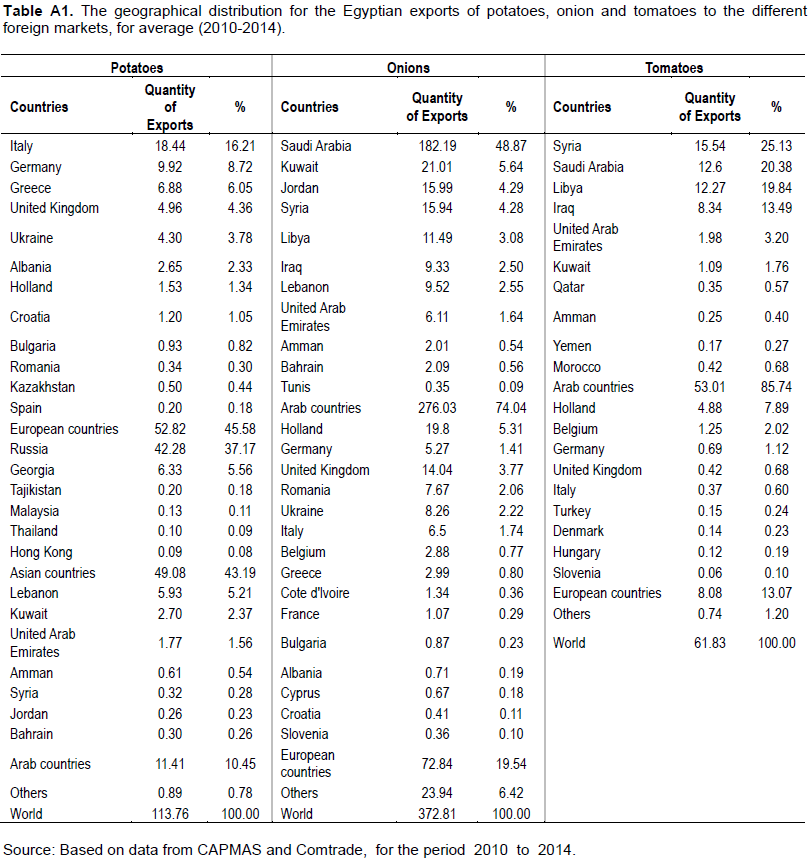 Potatoes
During the period under consideration, EU region was the largest importer of Egyptian potatoes, representing 45.58% of the total Exports. Asian countries ranked second, followed by Arab markets. European countries are mainly restricted to following number of countries: Italy, Germany, Greece, United Kingdom, and Ukraine. More interesting, diverse states namely Italy, Germany, Greece, United Kingdom, Ukraine, Russia, Georgia and Lebanon represented about 87.06% of Egyptian exports for potatoes in 2010-2014. Figure 1 shows geographical distribution for Egyptian exports of Potatoes by major importing countries over the period 2010-2014. The Russian market is  one  of  the  most  importing  Egyptian
fresh potatoes, importing 42.28 thousand tons with relative importance of about 37.20%. The quantity exported to Italian market from fresh potatoes was about 18.44 thousand tons accounted for 16.22% of the total quantity of Egyptian exports over the same period. Germany, Greece, Georgia, Lebanon and United Kingdom were also among the importing countries of potatoes representing about 8.73, 6.05, 5.57, 5.22 and 4.36% of the total potato exports from Egypt during the same period, respectively. 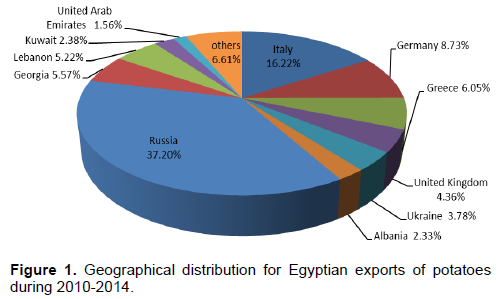 Onions
The Saudi market is one of the significant markets importing Egyptian onions. Table A.1 in the appendix shows the quantity exported to Saudi Arabia from onions is about 182.19 thousand tons representing about 48.87% of the total exported quantity to world markets. Also, Egypt's exports of onions were directed to the markets of Kuwait, Holland, Jordan, Syria, and United Kingdom with share of 5.64, 5.31, 4.29, 4.28 and 3.77% respectively, of the Egyptian onions exports to the foreign markets during the period (2010-2014) (Figure 2). 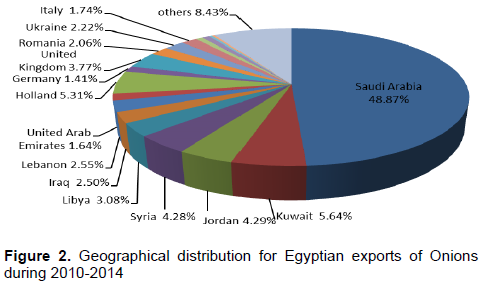 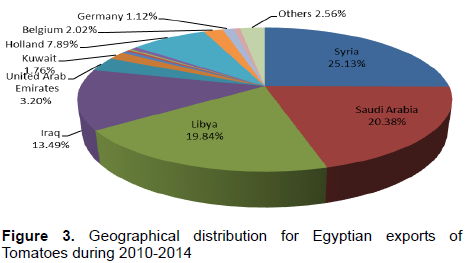 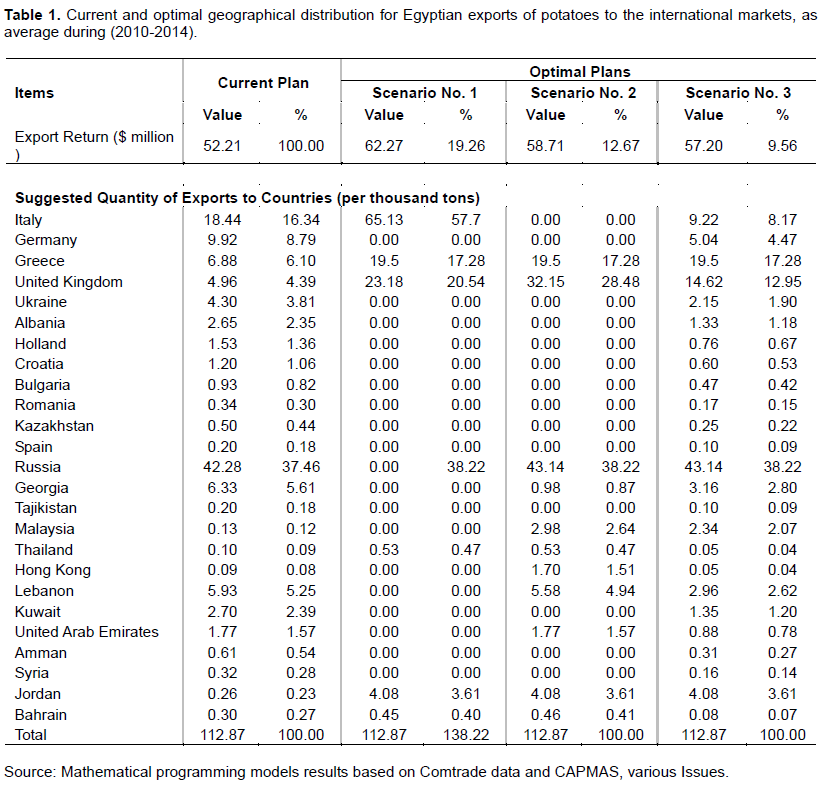 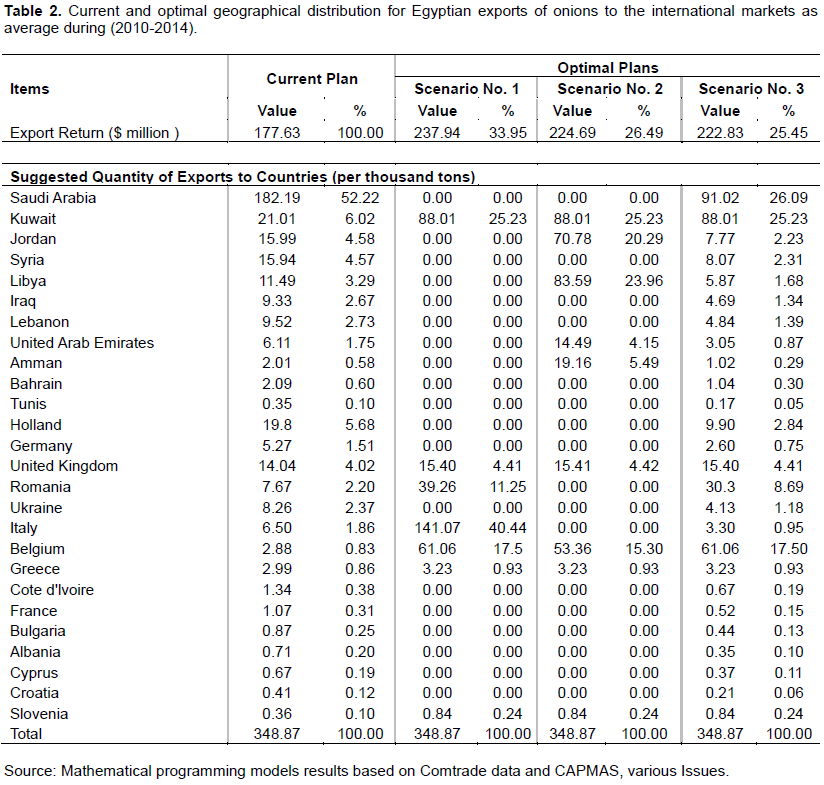 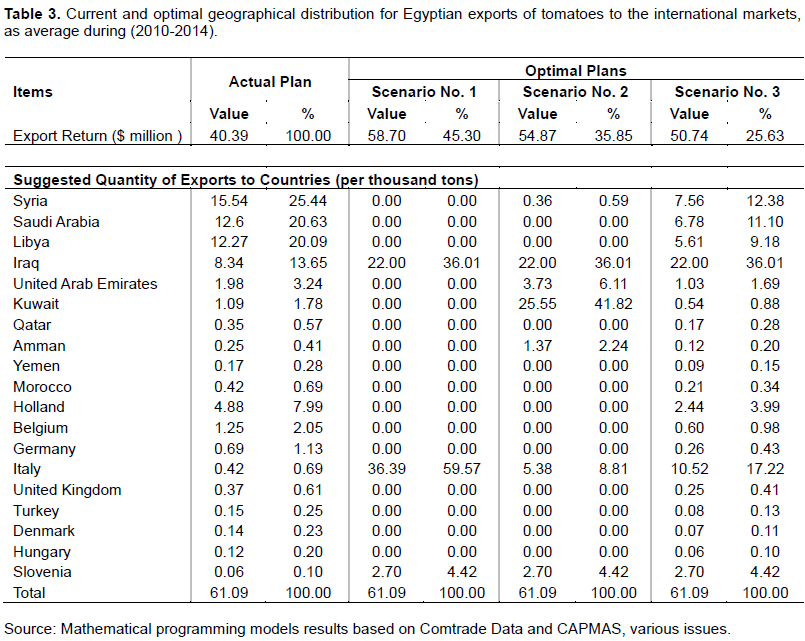 Regarding the results of the above analysis, the major potato export markets are Russia, Italy, Germany, Greece, and Lebanon representing about 82% of Egyptian exports from potatoes. The most important countries that import Egyptian onions are: Saudi Arabia, Kuwait, Jordan and Syria accounting together for 77% of total quantity exported to the world markets. Arab countries were the largest importers of Egyptian tomato exports. The top four importers Syria, Saudi Arabia, Libya and Iraq, together representing about 85% of total tomato exports from Egypt.
Based on the results of the suggested mathematical model to explore optimal distribution pattern for vegetable exports, the following conclusions could be deduced:
i) There is a likelihood for improvement in total returns to Egyptian vegetable exports through the optimum geographical re-distribution of crop exports.
ii) The largest increase in Egyptian fresh potato exports will be  to  United Kingdom, Greece, Russia, and, Jordan.
iii) The most important countries where higher export quantities of Egyptian onions are involved Saudi Arabia, Kuwait, Belgium and Romania.
iv) The most important import markets for Egyptian tomato exports are Iraq followed by Italy, Syria, and Saudi Arabia

Several recommendations would be made for the future export development policies in Egypt as follows:
i) Producers should be advised to produce high value export crops and increase their production to meet the growing foreign demand.
ii) Government should encourage investment in production projects for export and improve distribution export pattern.
iii) Maintaining Egypt's position of vegetable exports in the actual international markets to meet their needs with the required quality of crops.
iv) The applied mathematical models can be used to provide information to decision makers about likely optimal distribution policy alternatives for export development.