Co-morbidity of hypertension and dyslipidemia are found to be high in type-2 diabetes mellitus (DM) patients particularly with poor glycemic control. This study was aimed to assess the prevalence of dyslipidemia and its correlations with anthropometric and blood pressure variables among type-2 DM patients. The study was conducted on 314 type-2 DM patients at Hawassa University Comprehensive Specialized Hospital from February 28 to May 30, 2017. Socio-demographic and other data was collected using interview-directed structured questionnaire. In addition, serum biochemical parameters determined after overnight fasting and dyslipidemia was defined based on United State National Cholesterol Education program-III criteria. Statistical analysis such as Chi-square, student’s t-test/ Mann-Whitney U test, and Pearson correlation coefficient were conducted using Statistical Package for Social Sciences (SPSS) Version 20. The result showed that two hundred eight six (91.1%) participants had a minimum of one lipid parameter abnormal, which is well suited for the diagnosis of dyslipidemia. The prevalence of low HDL-cholesterol, high LDL-cholesterol, triglycerides and TC (total cholesterol) were 60.8, 14.3, 70.4 and 32.8%, respectively. The mean values of TC, LDL-cholesterol and uric acid (UA) were significantly higher among patients with body max index (BMI) ≥25 kg/m2 when compared to those with BMI <25 kg/m2 (p<0.01 for all). In addition, TC and TG were significantly higher among patients with BP ≥130/85 mmHg when compared to those patients with BP <130/85 mmHg (p<0.001 for both parameters). Triglycerides was significantly correlated with BMI, UA and hypertension (r=0.326, 0.553 and 0.22), respectively. TC showed significant correlation with BMI, UA and fasting blood sugar (FBS) (r=0.326, 0.298 and 0.132), respectively. Moreover, LDL-cholesterol was significantly correlated with waist circumference, BMI and FBS (r=0.16, 0.189 and 0.173), respectively. In conclusion, dyslipidemia is significantly higher in diabetes patients and it correlated with BMI, WC, blood pressure and UA. Therefore, lipid profiles should be performed periodically through treatment follow-up and proper management of correlated factors is vital in order to limit risks of cardiovascular diseases.

However, the possible interactions of BP and anthropometric variables with dyslipidemia in diabetic patients have not been studied in detail. Therefore, this study was designed to assess the prevalence of dyslipidemia and its correlations with anthropometric and BP variables among type-2 DM patients.

This cross-sectional study  was  conducted  at  Hawassa  University comprehensive specialized Hospital, Hawassa, Sidama zone from February 28 to May 30, 2017.  Hawassa is an administrative city of Southern Nation, Nationalities and People Regional (SNNPR) State and located 275 km from Addis Ababa, the capital city of Ethiopia. This administrative city encompasses about 133,097 populations (Population of Cities in Ethiopia, 2019). In addition, it has two governmental hospitals and nine public health centers.

A written consent was obtained from each study individual before collection of data. Interview-directed pre-structured questionnaire was used to collect socio-demographic and clinical related data. All type 2 DM patients who had a regular follow-up in the hospital were eligible in the study. However, patients on lipid level affecting drugs, pregnant women, patients with known cardiac disorders and renal failure were not included in the study. Anthropometric related data (weight and height) were collected based on WHO guideline (WHO, 2010). BMI was calculated as weight (in kilogram) divided by the height square (in m2). In addition, Systolic BP (SBP) and diastolic BP (DBP) were measured by mercury-based sphygmomanometer after the subjects had rested for at least 10 min. Repeated BP measurement was done within 3 min differences and average was taken to ensure accuracy.

Sample size was calculated based on single population proportion formula with 65.6% prevalence of dyslipidemia among DM patients (Bekele et al., 2017). Using the formula, the final sample size was calculated to be 346. To select participants from the study population, direct patients flow was checked for one week in the diabetic clinic. It showed that the average weekly DM patients flow was about 80 to 90. Finally, every fourth DM patient was nominated using systematic random sampling technique.

Ethical clearance was obtained from the ethical review committee of Institute of Health Sciences, Jimma University (Ref no IHRPGC/283/017). Clearance letter was submitted to Institutional

Review Board of Hawassa University, College of Medicine and Health Sciences and Hospital Clinical Director office for the necessary review and research permission, respectively. Moreover, all the study participants were well informed about the procedure of the study and written informed consent was obtained from all the study participants before data collection. In addition, the confidentiality of private information was strictly conserved.

Before actual data collection, the quality of data was checked by pre-testing of 10% questionnaires in Sidama Zone “Adare Hospital”, which is about 5 km away from the study area and then all amendments was done for structuring questionnaires. Trained nurses who were working in the medical outpatient department collected all relevant data of DM patients including primary and secondary data. Quality control samples run were strictly performed before running patients’ samples as well as along with patients’ samples to assess the reliability of the whole performances status. In addition, standard operating procedure (SOP) was followed from pre-analytical phase to result releasing.

Collected data were coded, entered in to and analyzed using SPSS (Version 22.0). Frequencies and percentages were used for categorical variables, while continuous variables were presented as mean and standard deviation (±SD). Skewed or abnormally distributed data were presented as median and interquartile range (IQR). Chi-square and or fisher’s exact test was used for categorical variables In addition the comparison of quantitative variables was done by student t test or Mann-Whitney U test based on the nature of continuous data distribution. Finally, Pearson correlation coefficient was used to assess the correlations between each lipid profiles and independent variables.

The mean values of WC (cm), TC (mg/dl), LDL-c (mg/dl), uric acid (mg/dl) and FBS(mg/dl) were significantly higher among DM patients having BMI greater than or equals to 25 Kg/m2 when compared to those who have BMI lesser than 25 Kg/m2 (p<0.01 for all). In addition, median values of SBP, DBP and TGs were significantly higher in overweight to obese patients when compared to those patients who have BMI <25 Kg/m2 (p<0.0001 for all, Table 2). 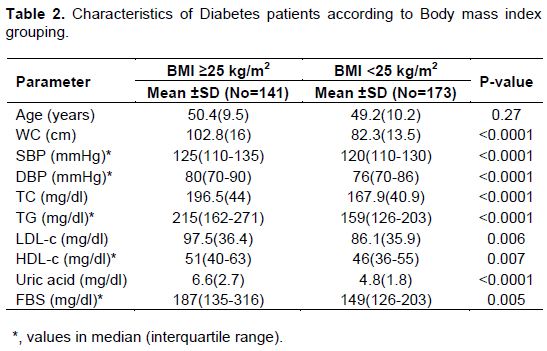 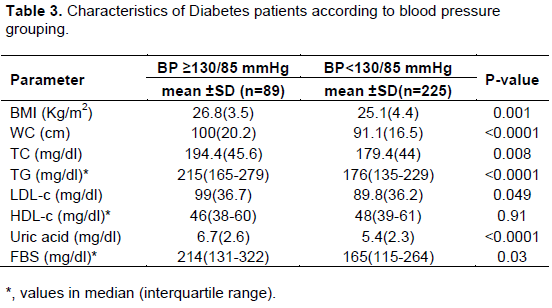 Two hundred eighty six (91.1%) of the participants had a minimum of one lipid parameter abnormal that is compatible with the diagnosis of dyslipidemia according to NCEP-ATP III guideline. Dyslipidemia is significantly higher in males when compared to females (59.5% vs. 31.5%, p=0.03). In addition, BMI showed significant difference in dyslipidemia (Table 4). Furthermore, hypertriglyceridemia was the most prevalent lipid profile (Figure 1). 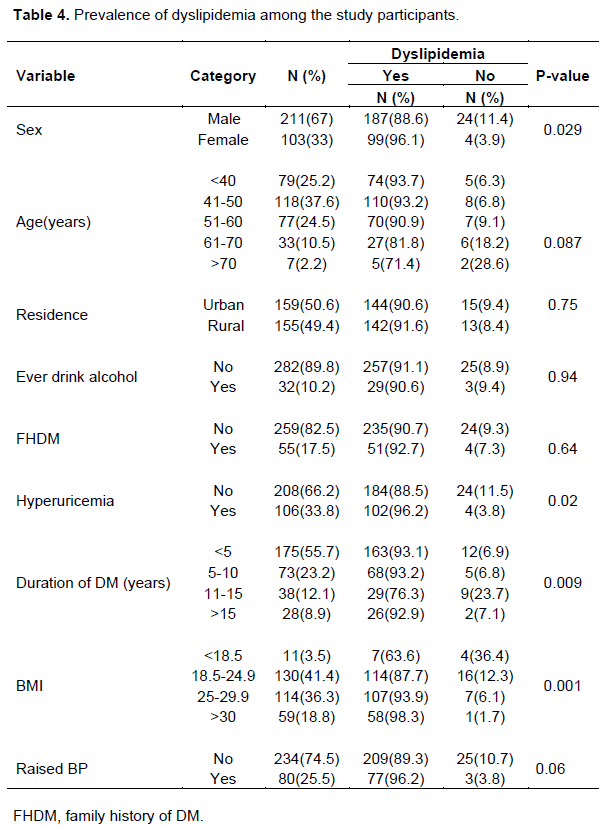 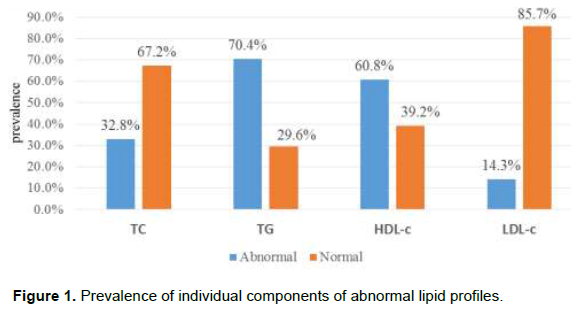 Correlations of anthropometric, blood pressure and other variables with dyslipidemia

This cross-sectional study carried out in a resource poor East African setting was to evaluate the correlations of anthropometric and BP with dyslipidemia (lipid derangements) among diabetic patients in Hawassa. Majority (91.1%) of the participants had a minimum of one lipid parameter abnormal that is compatible with the diagnosis of dyslipidemia. Dyslipidemia is significantly higher in males when compared to females. The present study indicated that the prevalence of dyslipidemia was 91.1%. The finding was comparable with the prevalence reported by Abdel-Aal et al. (2008), which was 90%. However, the rate is  much  higher  when  compared  with the study conducted in other part of Ethiopia (Bekele et al., 2017) where the prevalence of dyslipidemia was 65.6%. We found that the prevalence of abnormal lipid profiles of low HDL-c, high LDL-c, TG and TC were 60.8, 14.3, 70.4 and 32.8%, respectively. The rate of low  HDL-c, raised LDL-c, hypertriglyceridemia and hypercholesterolemia was lower than the finding reported from Jordan (Abdel-Aal et al., 2008) where 83.9, 91.5, 77.2, and 83.1% were the prevalence of low HDL-c, raised LDL-c, TC and TG, respectively. Conversely, lower rate of abnormal lipid profiles was reported from other similar region of South  Ethiopia except LDL-c (Bekele et al., 2017). The variability may be attributed to the variations in individual’s life style, geographical location, the rate of physical exercise performance.

The present study revealed statistically significant positive correlations between BMI and LDL-c, BMI and TC, and BMI and TGs in DM patients. This is in line with the study reported by Humaera et al. (2017) from Jatinangor population in Indonesia. Furthermore, different studies reported that a negative correlation between BMI and HDL-c (Humaera et al., 2017; Omotoye et al., 2016; Shamai et al., 2011; Babikr et al., 2016) however, we found that insignificant correlation between HDL-c and BMI and this is in line with the study reported from Tamil Nadu (Ranganathan et al., 2015).

The present study showed that a positive correlation between SBP and DBP with TGs. This is in support with the study of Lani et al. (2015) who revealed that there was a statistically significant correlation between TG and DBP; however, TC correlated with SBP.

We   found   that   serum   LDL-c,  TC  and   TGs   were significantly associated with uric acid. This in line with the study reported from US (Peng et al., 2015). Moreover, the level of uric acid increased in patients with coronary heart diseases (Sathiya et al., 2014). While, Kim et al. (2016) reported the correlation of uric acid with TGs. Furthermore, it was observed that FBS correlated with TC and LDL-c. Conversely, study report of Iranian adults indicated no correlation/association between FBS and lipid profile (Chehrei et al., 2007). The differences may be attributed to variation  in  glycemic  control status  of   DM patients.

This study showed a high prevalence of dyslipidemia and it was significantly higher in males when compared to females. BP, BMI, uric acid, FBS and WC appear to be correlated with the progression of dyslipidemia in type 2 diabetes and may assist as extrapolative factor for the progress of significant root causes of cardiovascular related diseases and deaths in developing countries. Therefore, lipid profiles should be checked periodically through treatment follow-up including anthropometric variables and BP management in order to limit risks of cardiovascular diseases in DM patients.

The nature of the study design  was  cross-sectional  and the findings of the study described only about a single point in time. We did not present the frequency of individual lipid profile based on National Cholesterol Education Program Adult Treatment Panel (NCEP-ATP) III criteria rather than the overall dyslipidemia, because the aim was assessing correlations.

The authors declared that they have no conflict of interests.