Diabetes, a known medical problem for more than two millennia, provokes complication in many parts of body and increase risk of premature death. Prevalence of diabetes is steadily increasing everywhere, most markedly in the world's low and middle- income countries. Diabetes Mellitus (DM) is a devastating disease but complications of Diabetes Mellitus can be prevented or delayed through proper awareness and preventive measures. The descriptive cross-sectional study was carried out with main objective to find out knowledge regarding diabetic complications among diabetic clients. Using non - probability purposive sampling method, 100 diabetic clients attending medical Out Patient Department of Tribhuvan University Teaching Hospital (TUTH) were selected and data was collected using pretested semi - structured interview schedule. Findings of the study revealed that almost all (90%) respondents had knowledge on major symptoms of hyperglycemia and 82% knew about its immediate management. Regarding hypoglycemia two third (66%) had knowledge on major symptoms of hypoglycemia whereas almost all (92%) had knowledge on its immediate management. Almost all respondents (95%) knew diabetics have increased risk of loss of vision whereas only 13% knew about increase risk of nerve damage. The study showed significant association between knowledge level and educational status (p=0.000), economic status (p=0.008), and participation in diabetes counseling (p=0.005). Based on the findings, it was concluded that respondents' knowledge regarding DM complication is above average. However, there is need of health education on warning symptoms of diabetes complications and their preventive measures.

Diabetes is one of the most common non - communicable diseases of the modern world, affecting 422 million people worldwide and cause an estimated 1.5 million deaths each year.  The  prevalence  of  Diabetes  Mellitus has risen exponentially around the globe in the last 3 decades. Similarly, 108 million people had had Diabetes Mellitus in 1985, the number increased to 422 million by 2016 which is predicted to be doubled by 2030 [World Health Organization (WHO), 2016].

Diabetes is a chronic condition that occurs when the body cannot produce enough insulin or cannot use insulin effectively and is diagnosed by observing raised levels of glucose in the blood. Overtime, hyperglycemia causes damage to many tissues in the body, leading to the development of disabling and life threatening health complications including loss of vision, kidney failure, heart attacks, strokes, leg amputations and heart failure (International Diabetes Federation (IDF), 2016).

In 2015, the International Diabetes Federation's (IDF) Diabetes Atlas estimates that: in high - income countries up to 91% of adults with the disease have type 2 diabetes. Three- quarters (75%) of people with diabetes live in low- and middle - income countries. It is estimated by IDF that 193 million people with diabetes are undiagnosed and are therefore more at risk of developing complications. Furthermore, one in 15 adults is estimated to have impaired glucose tolerance, and one in seven births is affected by gestational diabetes. Both of these conditions are associated with an increased risk of developing type 2 diabetes in later life. Similarly, 215.2 male populations and 199.5 million female populations worldwide are estimated to have diabetes.

The prevalence of diabetes is steadily increasing everywhere; most markedly in the worlds middle-income countries. Unfortunately, in many settings the lack of effective policies to create supportive environments for healthy lifestyles and the lack of access to quality health care means, prevention and treatment of diabetes are not being pursued. When diabetes is uncontrolled, it and its complications have dire consequences for health and wellbeing, finances of individuals and their families, and the economies of nations. Lack of awareness about diabetes, its complications combined with insufficient access to health services and essential medicines leads to complications such as blindness, amputation, heart disease and kidney failure (Diabetes facts WHO, 2016).

According to the descriptive study conducted among the 100 diabetic out-patients of B.P.Koirala Institute of Health Sciences, Dharan, the most common and frequent chronic diabetic complications were neuropathy (44.4%) followed by cardiovascular (11.9%), retinopathy (19.04%), nephropathy (16.6%) and others (11.3%) in the year 2011 (Maskey et al., 2011).

Diabetes Mellitus is one of the major fast growing non-communicable disease (NCD) threats to global public health. Trends in the incidence of diabetes indicate a disproportionate increase in developing countries due to current rapid demographic transitions from traditional to more westernized and urbanized lifestyles. It is on rise because of whether people they do not have knowledge on diabetic complications or they are neglecting the disease condition. Few studies have been carried out in Nepal in the past years, hence the researcher’s desire to study this topic.

The objective of the study was to find out knowledge on complications of diabetes between type 2 diabetic clients attending medical OPD and Diabetic clinic of TUTH.

The descriptive cross sectional study was conducted in medical outpatient department and diabetic clinic of Tribhuvan University Teaching Hospital, Kathmandu over a period of 2 weeks including 100 patients. Sample was selected using non-probability purposive sampling  technique.  Sample  size  was  calculated  using   formula (n=Z2pq/ e2) taking 62.5% prevalence of knowledge on diabetic complications reported by Ullah et al. (2005) 95% confidence level and 10% absolute precision). All the clients of both sex (male and female) diagnosed with type 2 DM for more than 3 months attending medical OPD and diabetic clinic of TUTH and those willing to participate in the study were included. Data was collected by semi-structured interview schedule. All participants were asked 17 close-ended questions and they were categorized as good and poor from mean score. All the data were reviewed, organized, and coded. Coded data was entered in datasheet and was analyzed by using descriptive statistics (frequency, percentage, mean and standard deviation) and chi square test was used to find out association between knowledge level and selected socio-demographic variables.

In this study, 100 participants were included, among them 59% were female and 41% were male. Fifty percent of the participants were of age group 40 to 59 years with mean age of 48.49±12.54. Descriptive statistics of the study population, the distribution of age group, sex, educational status, occupation, economic status, family history of DM, and duration of DM are shown in Table 1. Knowledge regarding short term and long-term complications of diabetes shown in Table 2 and Table 3 shows cross tabulation: level of knowledge and selected socio-demographic variables. About 95% of the participants said they got knowledge on diabetic complications from health institutions. With respect to knowledge about complications of DM, 51% had good knowledge and 49% had poor knowledge (Table 4). 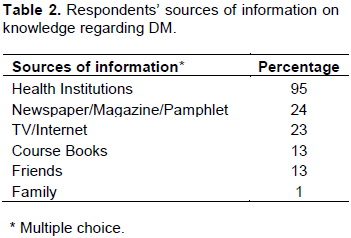 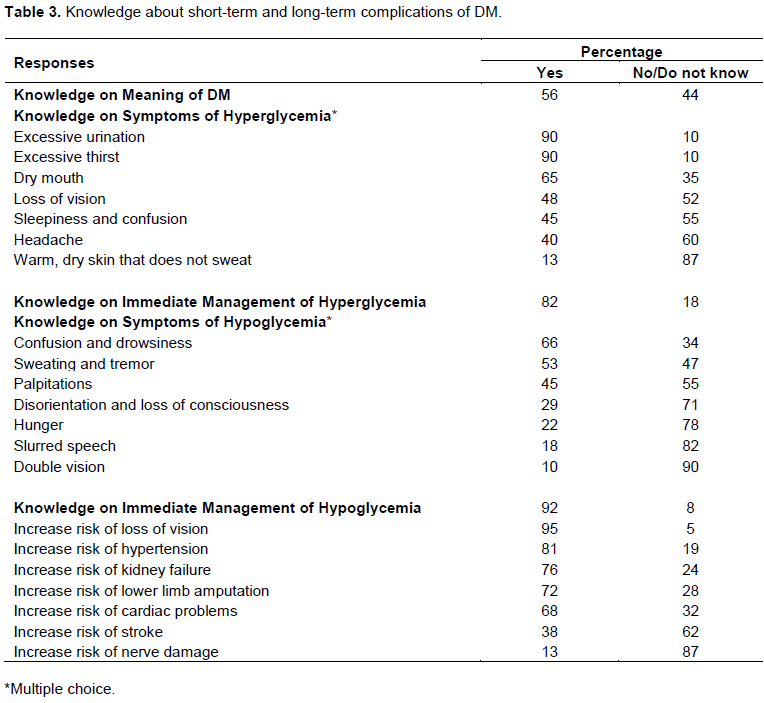 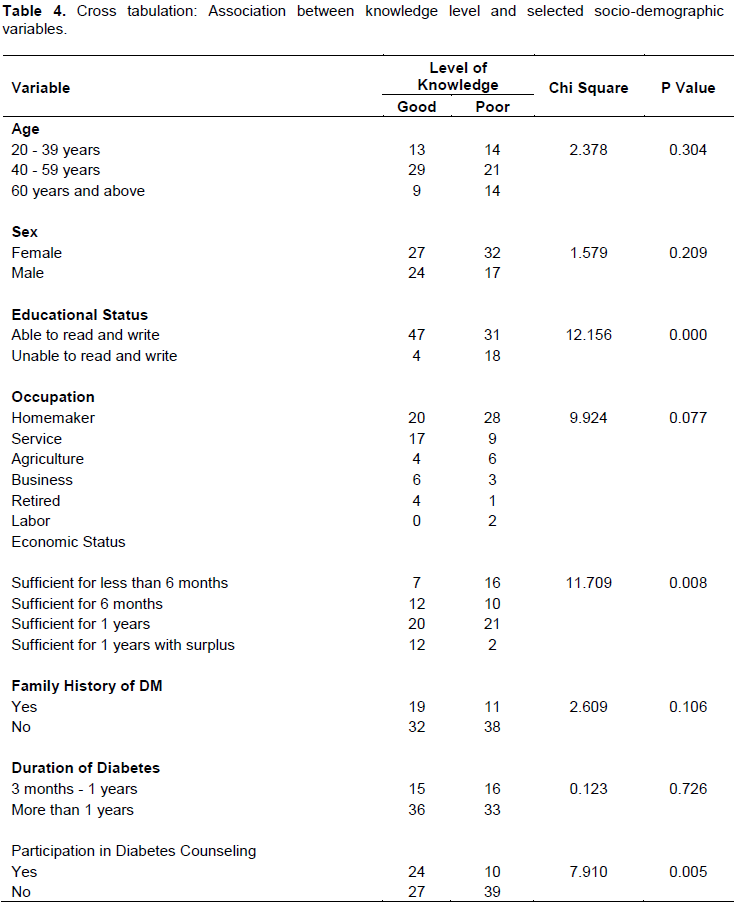 This study reveals that regarding source of information, almost all (95%) of the respondents obtained information about diabetes and its complication from health personnel followed by friends and family. Supporting this result, a research conducted by Menezes et al. (2015), of 100 samples, majority (78%) came to know the information from physician and rest from other different sources.

Regarding knowledge on meaning of diabetes, 56% thought that diabetes is a disease condition in which blood sugar is increased than normal level. Supporting this finding, of 199 patients in a research conducted by Foma et al. (2013) in Gambia, 47% said they knew what diabetes is.

This study shows that 62% of the respondents had knowledge to check blood sugar level monthly in case of uncontrolled DM. Similar to this finding study done by Dinesh et al. (2017), showed that out of 400 samples, 65% of the study participants had knowledge to check their blood sugar monthly. Regarding symptoms of hyperglycemia, almost all (90%) knew about excessive urination and excessive thirst as the major symptoms. Majority    (82%)    of    them   consult    physician    when these sign occurs. Supporting this finding, a research conducted by Mammen and Thankachan (2017), of 100 patients, majority 58% told that frequent urination and excessive thirst are symptoms of hyperglycemia and they seek physicians help when these signs occur.

This study showed significant association between knowledge and participation in diabetes counseling (P=0.005). Supporting this finding, research conducted by Deepali et al. (2017) knowledge level of people participated in diabetes awareness program was significantly higher. This study showed there is no significant association between family history of DM and knowledge on diabetes complication, which was contradictory to findings of research conducted in Gambia by Foma et al., which showed that history of diabetes in 1st degree relatives, have positive impact on diabetes knowledge.

In other researches, age, sex, occupation and duration of diabetes were found  to  be  positively  associated  with more knowledge but it is not consistent with the current study.

This study was conducted in the Out Patient Department and Diabetic Clinic of TUTH with small sample size and data collection was done by purposive sampling technique, using interview method. Therefore, the findings of the study cannot be generalized.

The findings revealed that there was a good knowledge on symptoms and management of hypo and hyperglycemia, complications of DM, and its preventive measures; while only few of them had knowledge regarding warning symptoms of  long-term  complications and risk of nerve damage. Those who were able to read and write, economic status sufficient for 1 year and surplus, and those who had participated in diabetes counseling had higher level of knowledge. The overall level of knowledge regarding diabetes complications among diabetic clients is good.