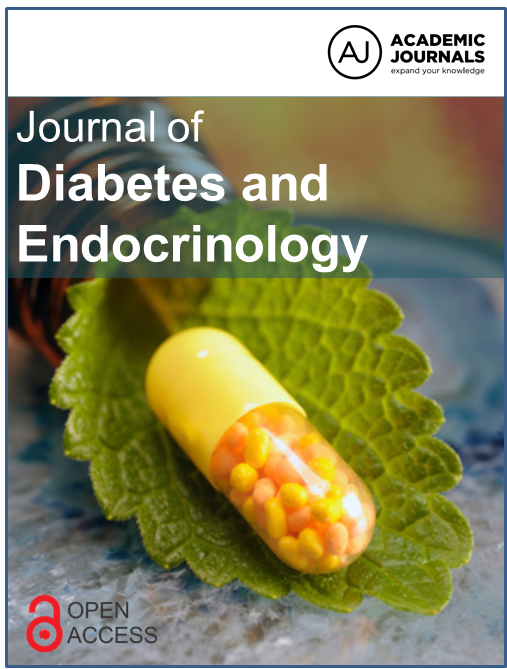 The purpose of this study is to evaluate the capacity of lycopene against diabetes-induced oxidative damage in Wistar rats. Thirty Wistar rats of both sexes, twenty-five of which were diabetic, were used. Diabetes was induced by a single intraperitoneal injection of streptozotocin (STZ) 60 mg/kg body weight and it was confirmed by the elevated blood glucose ≥200 mg/dl after three days. The rats were divided randomly into groups 1 to 6, each containing 5 rats. Group 1 (Normal control) and Group 2 (Diabetic control) rats were administered 0.5 ml of olive oil; Groups 3, 4, and 5 rats were, respectively, administered 10, 20, and 40 mg/kg body weight of lycopene, while Group 6 rats were administered 2 mg/kg body weight of Glibenclamide. All administrations were done orally and once daily for twenty-eight days. At the end of the treatment, serum levels of antioxidant enzymes, cortisol and malondialdehyde (MDA) were determined. Administration of graded doses of lycopene to diabetic animals significantly (P<0.05) decreased the blood glucose concentration after four weeks of treatment when compared to diabetic untreated animals. Serum levels of cortisol and MDA (index of oxidative stress) were reduced while there were up-regulated activities of serum endogenous enzymes (superoxide dismutase, catalase and glutathione peroxidase) in diabetic animals treated with all doses of lycopene when compared with diabetic untreated animals. Overall, lycopene attenuated the biomedical alterations in STZ-induced diabetic Wistar rats. Lycopene therefore possesses antioxidant activity at the doses tested in this study.
Key words: Lycopene, diabetes mellitus, oxidative stress, cortisol, malondialdehyde, catalase, glutathione peroxidase.

Diabetes mellitus (DM) is a metabolic disorder that features hyperglycemia and deficiency of secretion or action of insulin (Sailaja et al., 2003). Increased free radicals coupled with the reduction of antioxidant defence mechanisms, caused by diabetes mellitus, may result in insult to cellular organelles, alteration in biomolecules, and increased lipid peroxidation (Maritim et al., 2003; Rajasekaran et al., 2005). In diabetics, sustained hyperglycemia causes increased generation of free radicals especially reactive oxygen species due to glucose auto-oxidation and protein glycosylation which results in diabetes-induced oxidative stress (He and King, 2004; Moussa, 2008; Al-Faris et al., 2010). Diabetes-induced oxidative stress is associated with diabetic complications (Negi et al., 2011). The sustained rise in reactive oxygen species (ROS) and reactive nitrogen species (RNS) coupled with a decline in antioxidant activity leads to the occurrence of oxidative and nitrosative stress that can result in endothelial dysfunction, insulin resistance as well as alteration in the number and function of pancreatic β-cells, contributing to diabetic microvascular and macrovascular complications (Baynes and Thorpe, 1999; Bandeira et al., 2013).

Apparently healthy Wistar rats of both sexes (20 males and 10 females) weighing 150 to 200 g were procured from the Department of Human Physiology Animal House, Ahmadu Bello University, Zaria, Nigeria. The rats were kept under the laboratory condition. The rats were housed five in each cage, fed with standard commercial feeds and allowed to access drinking water. The study protocol was approved by the Institutional Animal Ethics Committee of the Ahmadu Bello University, Zaria, Nigeria.

Diabetes mellitus was induced by a single intraperitoneal injection of 60 mg/kg body weight dose of STZ (Sigma Chemicals, St Louis, U.S.A.) dissolved in fresh 0.1M cold citrate buffer of pH 4.5 into 18 h-fasted rats. Because STZ has the capacity to produce severe and chronic hypoglycemia as a result of massive pancreatic insulin release, the rats were treated with 20% glucose solution orally after 6 h. For the next 24h, the diabetic rats were given 5% glucose solution bottles in their cages to prevent hypoglycemia (Dhandapani, 2007). Three days after STZ injection, the blood was collected from the tail artery of the animals. Rats having fasting blood glucose concentration ≥200 mg/dl were considered diabetic and recruited for the study.

Thirty Wistar rats were used and randomly divided into six groups of five animals each as follows:

All animals were treated orally once per day for four weeks.

Blood samples were collected from the tail artery of the animals before the commencement of treatment indicated as week 0 and weeks 1, 2, 3, and 4 after the treatment. Fasting blood glucose concentration was determined with glucometer (Accu-chek Advantage) and results were expressed as mg/dl.

Collection of erythrocytes and serum preparation

After the last day of treatment (28th day), all the animals were slayed using light chloroform after 24 h and 5 mL of blood was collected through the cardiac puncture into specimen bottles and allowed to clot. The blood was separated by centrifugation at 2,000 g for 10 min using Hettich Centrifuge (Universal 32, Made in Germany). The supernatant was used for the determination of serum cortisol level, MDA and antioxidant enzyme activity.

Serum was collected in the morning hours before the noon time. Cortisol was determined using the standard laboratory of BLK diagnostics kit (BLK Cortisol Enzyme-linked Immunosorbent Assay (ELISA) kit, Badalona, which was based on the principle of competitive binding (Tietz et al., 1994).

Malondialdehyde is one of many low molecular weight end-products of lipid hydroperoxide decomposition and is the most often measured as an index of lipid peroxidation. Serum MDA concentration was evaluated using the NWLSS™ Malondialdehyde assay kits (Northwest Life Sciences Specialties, Product NWK-MDA01, Vancouver WA. The assay is based on the principle that MDA reacts with thiobarbituric acid (TBA); forming an MDA-TBA2 adduct that absorbs strongly at 532 nm.

superoxide dismutase activity was assessed using the North West Life Science Specialties (NWLSS™) SOD assays kit (Product NWK-SOD02). The method is based on the principle of superoxide inhibition of auto-oxidation rate of hematoxylin as previously described by Martin et al. (1987) with modification to increase robustness and reliability of the method. Briefly, 920 μL of assay buffer was added to each cuvette. This was subsequently followed by addition of 40 μL of assay buffer (for blank) and 40 μL of the sample. The mixture was incubated for two minutes, after which 40 μL hematoxylin reagent was added and mixed quickly to start the auto-oxidation reaction. Absorbance was read at 560 nm for every 10 s for 5 min.

The activity of catalase was evaluated using North West Life Science Specialties (NWLSS™) Catalase assay kits (Product NWK-CATO1) based on the method of Beers and Sizer (1952) with little adjustment in order to increase robustness and convenience of the method. The method is relied on monitoring the consumption of H2O2 substrate at 240 nm. Briefly, to a clean cuvette, 1000 μL of sample dilution buffer was added and placed in the reference cuvette holder and the wavelength of spectrophotometer was set to 240 nm. To a clean semi-micro UV cuvette, 950 μL of working assay buffer was added. The 50 μL of diluted standard or sample was pipetted to the cuvette and mixed as quickly as possible by repeated pipetting (About 10 times) with the same pipette tip. Absorbance was measured immediately at 240 nm.

The activity of GPx was assessed by adopting the protocol of North West Life Science Specialties (NWLSS™) cGPx (GPX1) ELISA kit (Product NWK-GPX02) based on the method described by Avissar et al (1994). Estimation of GPx activity follows the sandwich Enzyme-Linked Immunosorbent Assay, where sample GPx concentration was determined by comparing the 450 nm absorbance sample wells to the absorbance of known standards.

The data were expressed as mean ±SEM. The data were analyzed using one-way ANOVA with Tukey’s post-hoc test. All data analyses were evaluated using SPSS version 17.0 software and Microsoft Office Excel (2007). The values of P≤0.05 were considered statistically significant. 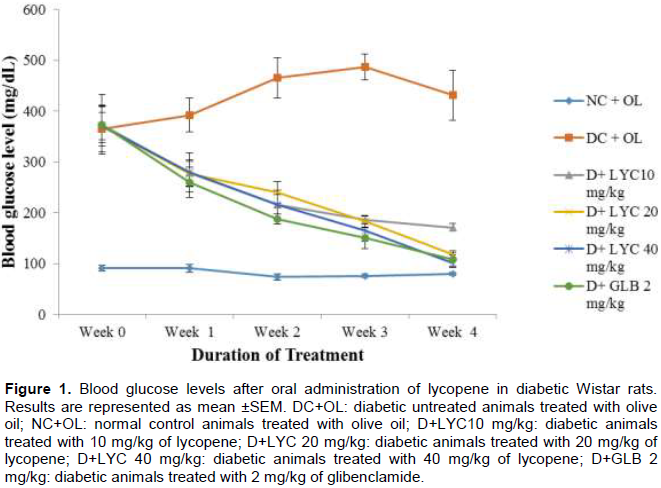 STZ substantially (P<0.05) increased serum cortisol levels in the diabetic untreated animals when compared with normal control. Lycopene at all doses significantly (P<0.05) reduced the serum cortisol levels in a manner not comparable with the glibenclamide (2 mg/kg body weight) treated diabetic animals. The greatest reduction was obtained with the 10 mg/kg body weight of lycopene (Figure 2). 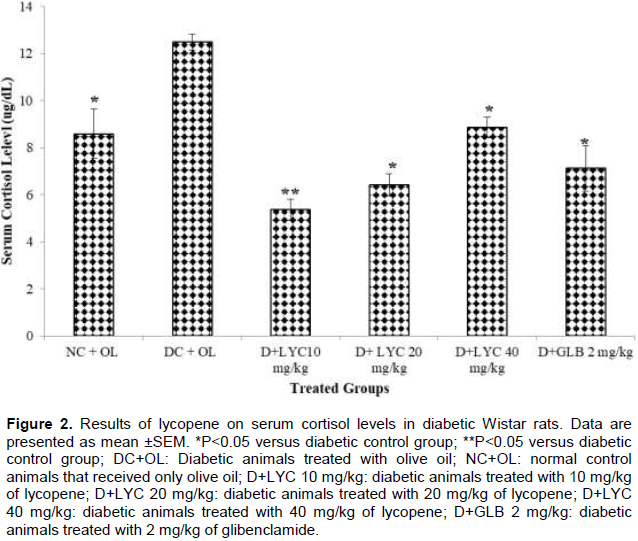 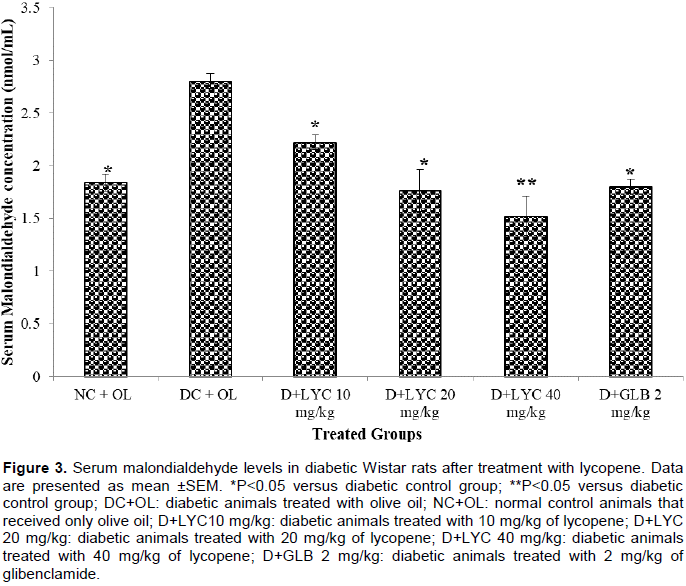 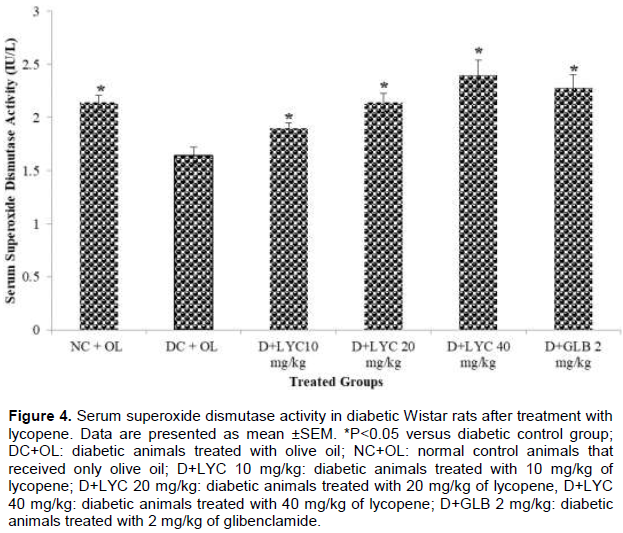 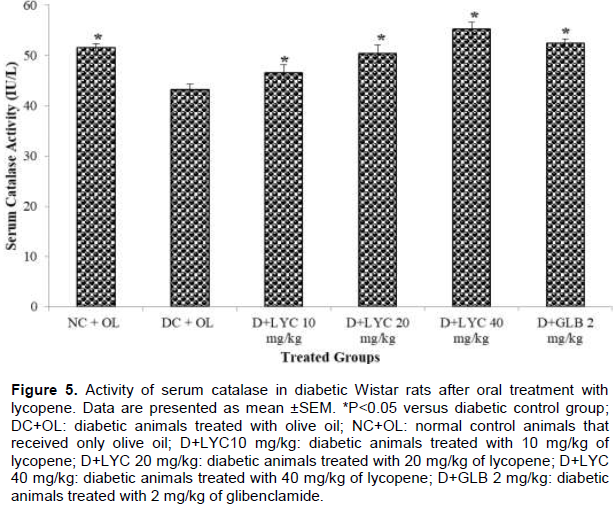 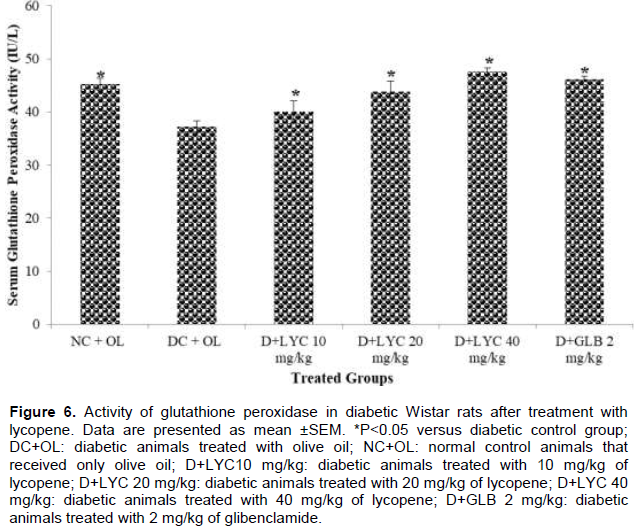 This study showed the ameliorative effect of lycopene at 10, 20, and 40 mg/kg body weight on oxidative stress indicators in diabetic rats. Following treatment of diabetic rats with lycopene at all doses, the blood glucose levels were significantly reduced. This finding agrees with the previously reported investigations on glucose-lowering effect on lycopene by (Ali and Agha, 2009); (Haribabu et al., 2013) as well as (Aydin and Celik, 2012). Hyperglycemia is mediated largely in part, by a state of enhanced oxidative stress which results in the increased production of reactive oxygen species which can cause adverse structural and functional changes in tissues (Mehta et al., 2006). In addition, various mechanisms have been associated with hyperglycemia which includes glucose autoxidation, stimulation of the polyol pathway, activation of the reduced form of nicotinamide adenine dinucleotide phosphate oxidase, and generation of advanced glycation end-products which results in increased production of reactive oxygen species (Bonnefont-Rousselot et al., 2000). Therefore, the ability of lycopene to lower blood glucose levels in diabetic rats may be as a result of its capacity to protect vital biomolecules including lipids, protein and DNA of beta cells from free radicals or as a result of its antioxidant activity through scavenging of free radicals released from glucose autooxidation resulting from sustained hyperglycemia (Ashwani and Prachi, 2013). More so, lycopene may also have acted by stimulating glucose utilization by peripheral tissues or increasing insulin production by the pancreas from regenerated β-cells (Suganya et al., 2012).

The present study showed that serum cortisol levels were significantly elevated in the diabetic untreated rats when matched with those of normal control animals. This effect is consistent with reports of Bitar (1998) and Radahmadi et al. (2006) which showed that diabetes is closely linked with heightened status of glucocorticoids and elevated adrenal function. The ability of lycopene to significantly reduce the elevated serum cortisol level in diabetic treated rats indicates that lycopene could be exerting ameliorative effects in diabetes-induced hypercortisolism in the animals. Administration of lycopene considerably lowered MDA concentration in the serum of the diabetic treated rats. This finding corroborates the report of Singh et al. (2012) which demonstrated that treatment of diabetics with lycopene given once daily for three months attenuated oxidative stress by significantly decreasing serum MDA level. The activity of lycopene observed in the present study may be due to its various antioxidant defense strategies, most especially the scavenging of two of the ROS: singlet molecular oxygen and peroxyl radicals (Atessahin et al., 2006).

Lycopene has been reported to act as a chain-breaking antioxidant (Singh et al., 2012). The combination of peroxyl radicals formed in the propagation phase of lipid peroxidation with lycopene yield carbon-centered radicals. These carbon-centered radicals then react readily and reversibly with oxygen to form new chain carrying peroxyl radicals which are stable than reactive oxygen species (Singh et al., 2012). The potent free-radical scavenging capacity of lycopene, owing to its unique structure (high number of conjugated double bonds), might have quenched the superoxide and other free radical anions, which are highly released in chronic diseases like diabetes mellitus (Rao and Agrawal, 1999; Upritchard et al., 2000; Khachik et al., 2002). Hence, the observed effects of lycopene in this study may be attributed to this property. In this study, serum anti-free radical enzymes (GPx, CAT and SOD) activities were significantly decreased in diabetic treated rats. These findings are consistent with the reports of various researchers (Balasubashini et al., 2004; Al-Azzawie and Alhamdani, 2006; Cheng and Kong, 2011; Singh et al., 2012; Cheng et al., 2013). Overproduction of free radicals from increased oxidative stress may result in diabetic complications (neuropathy, nephropathy, retinopathy, and vascular disorders) (Al-Azzawie and Alhamdani, 2006). However, whether anti-oxidative effects of lycopene can reduce those complications is unknown.