Universally, Body Mass Index (BMI) is used to diagnose obesity, and is associated with cardiovascular disease, as well as significant morbidity and mortality.  Because the effect of obesity on health risk is influenced by ethnic background, age, and gender, using a universal BMI cut-off been questioned by some authorities or workers. Reports on appropriate BMI for Nigerians are scanty. Results of a cross-sectional study involving residents of Ado Ekiti, Nigeria, and neighboring towns and villages who participated in a health screening were analyzed. BMI cut-off which identifies the presence of hypertension and hypercholesterolemia was determined with Receiver Operating Characteristics curve. Five hundred and fifty-two (552) participants comprise of 230 (41.7%) men aged 38.8±15.6 years and 322 (58.3%) women aged 40.7±15.4 years. More women (27.7%) than men (8.8%) had obesity (p<0.001). Hypercholesterolemia was more prevalent in women (7.1%) than men (3.9%), p=0.014. Prevalence of hypertension was 24.8 and 22.0% in men and women, respectively. Overall, the prevalence of overweight/obesity and hypertension increases with age (p<0.001). The optimal BMI cut-off for men and women were 24.1kg/m2 (AUC= 0.619 [95% CI, 0.535 to 0.704], p= 0.007: SS, 70.2% and SP 56.6%) and 28.9 kg/m2 (AUC: 0.690 [95% CI, 0.548 to 0.831], p= 0.016: SS, 64.3% and SP 67.5%), respectively. Lower BMI cut-off than the WHO-based classification is appropriate for Nigerians. The BMI cut-off for identifying cardiovascular disease is different for men and women.

Raised blood pressure is prevalent in 40% of adult population globally, and it is a major cardiovascular risk resulting in significant morbidity and mortality (WHO, 2013). Worldwide, hypertension-related complications accounted for 9.4 million deaths yearly and this represents the highest mortality from non-communicable diseases (WHO, 2013). Hypercholesterolaemia is a risk factor for coronary heart disease and stroke (Peters et al., 2016), and both high blood pressure and high total cholesterol can act in concert to increase cardiovascular related death (Satoh et al., 2015). Obesity is now recognized as a distinct disease, and its prevalence continue to increase worldwide (Jensen et al., 2014). Both underweight and overweight/obesity are known to influence health adversely (Angelantonio et al., 2016). Universally, Body Mass Index (BMI) is used to diagnose obesity, and is associated with cardiovascular disease, as well as significant morbidity and mortality (Flegal et al., 2013). Increasing BMI is associated with  increasing systolic and diastolic blood pressures, and this association has been shown by both cross-sectional and prospective studies, such that for a given increase in BMI, there is a corresponding rise in blood pressure (Wilsgaard et al., 2000, Gupta and Kapoor, 2012; Pan et al., 2013; Ren et al., 2016). Similarly, BMI is positively associated with elevated total LDL cholesterol (Fukui, 2000; Szczygielska et al., 2003). Thus a given BMI can be used to predict elevated blood pressure and cholesterol.
Accurate diagnosis of obesity is very important since it will determine those who will be enrolled for management or screening of cardiovascular diseases. The BMI classification released by WHO is being used to diagnose general obesity in most countries of the world (WHO, 2000b) because, the effect of obesity on health risk is influenced by ethnic background, age, and gender, using a universal BMI cut-off for different age, ethnic groups and gender which have been questioned by some authorities (Pan et al., 2013; Misra, 2015; Heymsfield et al., 2016; Hunma et al., 2016). In recognition of this, different waist circumference (another surrogate measure of obesity or body fat) cut-off has been proposed for different gender and regions in the world (Alberti et al., 2005). Due to observations that the World Health Organization (WHO) recommended, BMI cut-off underestimate obesity in certain populations, further studies in different ethnic groups were also suggested (Clark et al., 2016). In response to Asian studies, the WHO recommended lower BMI cut-off for Asia-Pacific region (WHO, 2000a). Recent studies among Asians suggested a different BMI cut-off for that region (Cheong et al., 2013; Ren et al., 2016; Papier et al., 2017). Some authors even found different BMI cut-off for people within the same country (Pan et al., 2013). Indeed community-specific BMI was recommended by some workers (Kishore et al., 2011).
Reports on appropriate BMI for Nigerians are scanty, and the need to derive one was advocated by some authors (Egbe et al., 2013). One study suggested that, lower cut-off identified hypertension and prehypertension, but was conducted in South-East Nigeria, and limited by one cardiovascular risk factor (Ononamadu et al., 2017). Whether their findings are applicable to western Nigeria is unknown. Is the recommended WHO BMI cut-off appropriate for Nigerians? If so, is it appropriate for both men and women?  The aim of this study is to determine the appropriate gender-specific BMI cut-off for South-Western Nigerians. We hypothesize that the WHO recommended BMI category is not applicable for Nigerians. Primarily, we hypothesize that lower  BMI  cut-off is appropriate for Nigerians and the BMI cut-off is different for men and women.

In order to test these hypotheses, data of a health survey conducted in 2011 in Ado-Ekiti, Ekiti State, Nigeria, was analyzed. Approval was obtained from Ethic and Research Committee of Ekiti State University Teaching Hospital, Ado-Ekiti (EKSUTH/A67/2017/011/003) for this study. The study involved residents of Ado-Ekiti, Nigeria, and neighboring towns and villages. Out of the 865 people who participated in the cross sectional study, the result of 552 participants with complete data of interest was analyzed. Ado Ekiti is a state capital city in the South Western part of Nigeria. It is an urban settlement with a current estimated population of about 366,280 38. The major occupations of the residents are trading, semi-skilled work, and government workers.  The participants were mobilized through local radio and television public announcements, and handbills. The health survey obtained demographic and health-related data that included clinical measures of blood pressure, weight, and height. Fasting plasma cholesterol was also determined.
Clinical measurements
Body weight and height were assessed to the nearest 0.1 kg and 0.1 m respectively with all subjects standing without shoes, heavy outer garments and headgear. Weight was measured using a standardized bathroom scale, while the height was measured with a stadiometer. Body mass index (BMI) was calculated as weight in kilograms divided by the square of height in meters. BMI status was categorized as follows: Underweight < 18.5 kg/m2; normal 18.5 to 24.9 kg/m2; overweight 25 to 29.9 kg/m2; obese ≥30 kg/m2 (WHO, 2000b). Obesity was further classified into class 1 (30 to 34.9kg/m2), 2 (35.0 to 39.9kg/m2) and 3 (≥40kg/m2). The blood pressure was measured from the left upper arm with the participants in sitting position.  Accussons’ mercury sphygmomanometer attached to appropriate cuff sizes was used.  The first and fifth Koroktoff sounds were taken as the systolic and diastolic blood pressures, respectively. Hypertension was defined as blood pressure ≥140l90 mmHg (Chobanian et al., 2003).
Biochemical assays
After an overnight fast, 5 ml of blood was taken into heparinized bottles for evaluation of total cholesterol. The blood samples were centrifuged, and the separated plasma was stored in an on-site refrigerator.  Total cholesterol was determined by photometry method with Mindray chemistry analyzer (BS 200, China). Total Cholesterol was categorized into 3: normal (<5.17 mmol/L), borderline (5.17 to 6.18 mmol/L) and high (≥6.21 mmol/L) (NCEP ATP III, 2001).
Statistical analysis
Data analyses were done with the statistical package for social sciences (IBM ) version 20.0 (Chicago, Illinois, USA). Continuous and categorical data were expressed as means (SD) and percentages, respectively. Student’s t-test was used to compare continuous variables while Pearson’s Chi-square was used to compare categorical variables. Receiver Operative Characteristics curves were generated for BMI and hypertension alone, hypercholesterolemia alone, and both cardiovascular risk factors. The area under curve (AUC) on Receiver Operative Characteristics (ROC) curve was used to determine the BMI cut-off which predicts hypertension and hypercholesterolemia. The values that maximize the specificity and sensitivity were taken as the cut-offs.  The procedure was done for both men and women together, and then separately. The level of significance was set at p<0.05. 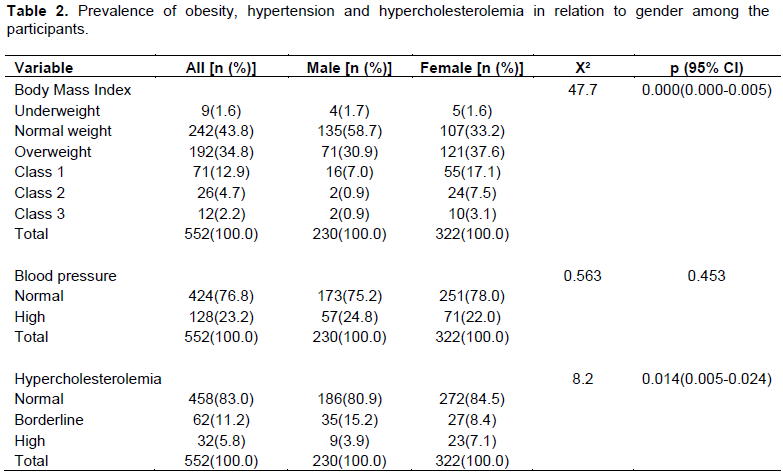 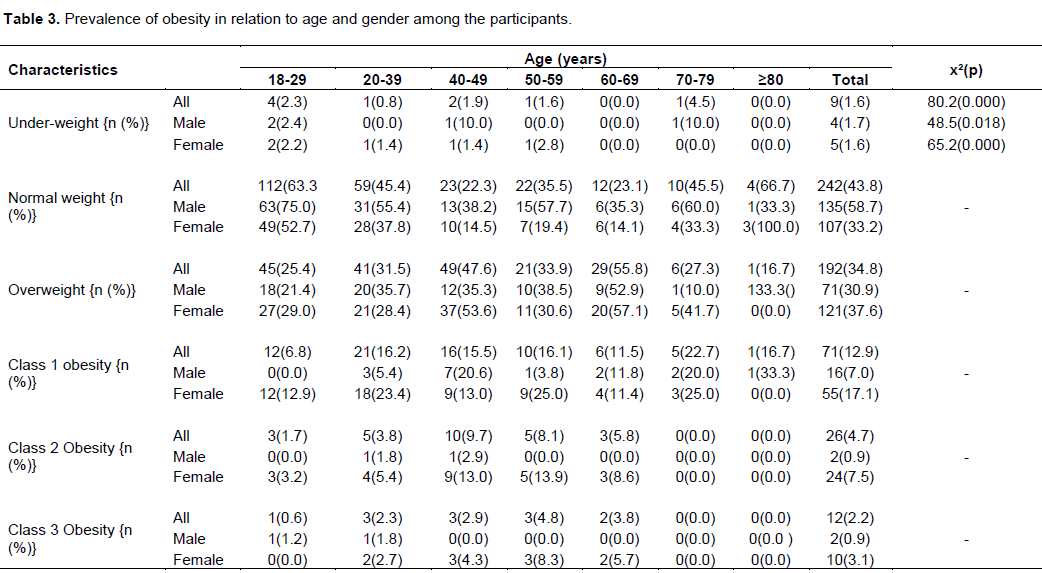 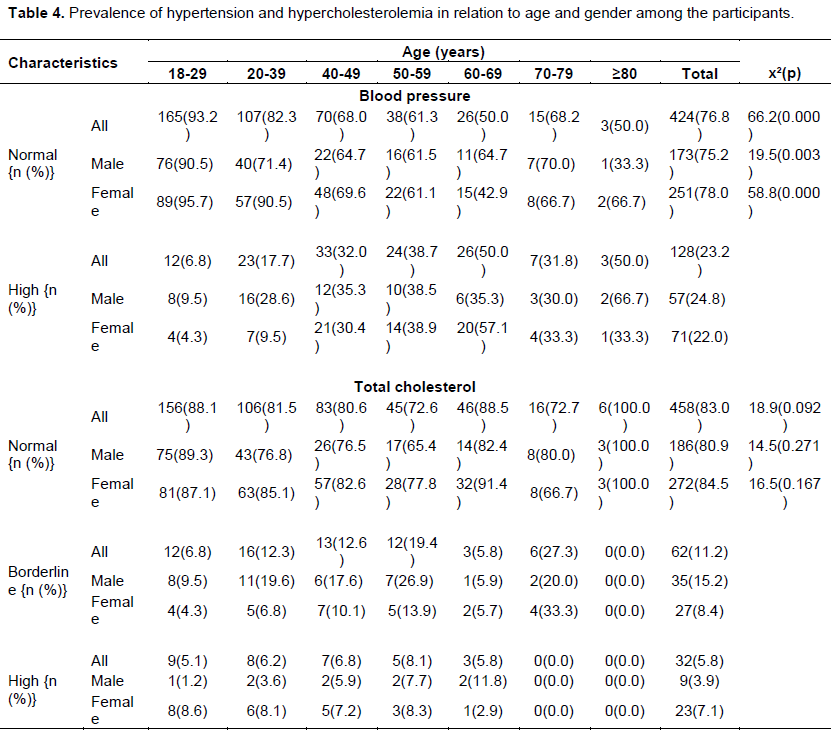 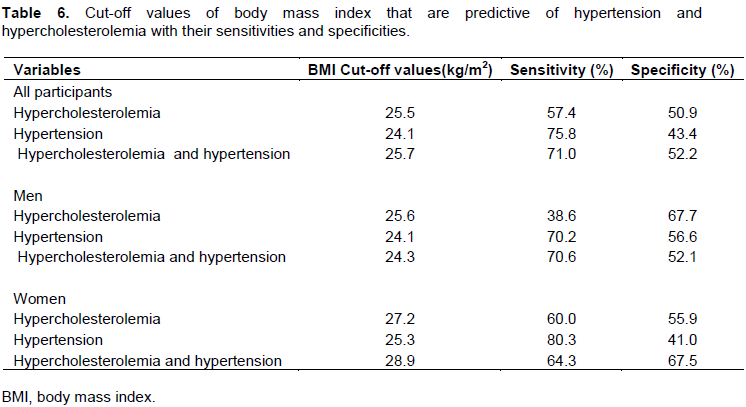 This study is limited by location and cross-sectional design. There is need for nationwide, preferably a longitudinal study in order to confirm our findings.

Lower BMI cut-off than the WHO-based classification is appropriate for Nigerians. The BMI  cut-off  for  identifying cardiovascular disease is different for men and women. A larger and nationwide study should be conducted to confirm these findings.