The study was underpinned by interpretivism, a qualitative research paradigm, to achieve its objective of establishing strategies for stimulating bank credit access among farmers in Zimbabwe. Contrary to positivists, qualitative research purists believe that there are multiple realities in the social world that can be derived from the perceptions and resultant actions of people (Burrel and Morgan, 1979; Saunders et al., 2016). In addition, they believe that researchers cannot detach themselves from their own values when conducting research (Saunders et al., 2016). Qualitative research strategies also claim that the “knower” and the “known” cannot be separated because the subjective knower is the only source of reality (Terrell, 2012). Accordingly, in this study, the knower, who is the banker, was given the opportunity to convey perceptions and opinions regarding what could be done to enhance the farmers’ access to bank credit in Zimbabwe in recognition of the fact that they are the ones who set the rules or conditions for bank credit access.
Population, sampling procedure and sample size
The study was conducted in Harare, the capital city of Zimbabwe, which is home to all the commercial banks’ head offices. Its target population was made up of 13 registered commercial banks in Zimbabwe (RBZ, 2020). Due to the small number of commercial banks involved, the study decided to include all of them in the sample in order to gain an accurate picture of what has to be done to stimulate bank credit access among farmers in Zimbabwe. However, only 12 of the banks are currently operational. As a result, the 12 operational and registered commercial banks in Zimbabwe formed part of the study’s sample.
Data collection
Primary data were collected from the bank credit officers in the commercial banks’ agribusiness units making use of a pre-tested structured interview guide. Prior appointments were made over the phone with potential respondents to ensure that they would be available in office on the day of the oral interview. The structured interview guide enabled the researcher to manage bias issues that usually arise when the interviewer and interviewee become too involved with each other. Hence, the structured interview guide helped the researcher to strictly and objectively adhere to the agenda at hand.
Data analysis
Data were analyzed by thematic analysis making use of NVivo 12 Plus. The researcher initially read through the respondents’ verbatim responses, and subsequently created themes for responses that related to the same subject. The data were subsequently transcribed into NVivo, after which the responses were coded under the themes to which they belonged. The most popular themes were then identified and discussed in detail. Tables, exploratory diagrams, word clouds, comparison diagrams and word trees were used to present the analyzed data. In line with Gibbs (2018), a detailed protocol and database was set up to ensure that other researchers who would like to conduct the same study would be able to follow the same procedure. The researcher also employed member checking by going back to the study’s participants with the findings for them to confirm if they reflected the truth (Cresswell, 2014). This was done and the bank credit officers confirmed that the findings were valid. 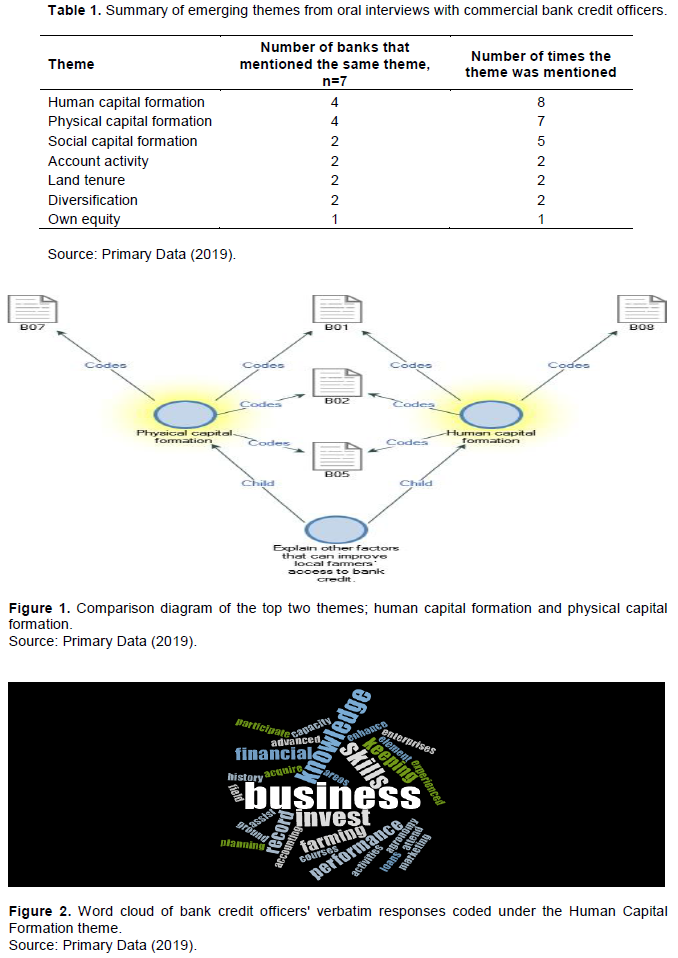 Human and physical capital formation activities linked to investments in farm productive assets and personal development skills in agricultural production and business management emerged as the key prescriptions for enhancing bank credit among farmers in Zimbabwe according to the commercial banks. Beyond investments in farm assets, the study also revealed that off-farm investments could assist farmers in solving the collateral problem induced by the lack of land ownership, thereby enhancing their chances of accessing bank credit. Moreover, the seizing of value chain opportunities by farmers in value addition and other post-harvest technologies could diversify the farmers’ income portfolios and cushion them from various risks, thereby enhancing their credit access prospects. Business management skills in data management in areas of financial record keeping, budgeting and historical performance reporting were also prescribed by bankers as crucial catalysts of bank credit access among farmers in Zimbabwe. Social capital formation activities formed through building relationships with key stakeholders like the lenders themselves and peer farmers were also recognized as important for enhancing farmer access to bank credit. Farmer based organizations were also prescribed for farmers to share risk and provide a foundation for sharing knowledge.
In light of the earlier findings, the government should prioritize the addressing of land tenure security among farmers to ensure their sustainable access to bank credit. Agricultural extension services by the government in local farms should also be intensified to enhance farmer knowledge. Investments in farm productive assets should also be pursued by farmers to ensure that they enhance their production capacity, incomes and their repayment capacity in order to attract lenders. Farmers are also challenged to diversify into value addition activities off the farm in order to fulfil collateral requirements by banks for titled immovable property. Investments in alternative power solutions by farmers in solar and wind may also shield them from losses induced by disruptions in power utilities in the country, especially electricity and water. Personal development initiatives to acquire agricultural production and business management skills should also be prioritized by farmers in order to enhance their access to bank credit. Farmers should also create farmer-based organizations like cooperatives that can boost their production capacity potential, and also minimize their moral hazard risks in the eyes of the lenders to be able to qualify for alternative financing schemes like group lending. The bankers themselves are also implored to pursue such financing models given the collateral problem faced by farmers in Zimbabwe in the absence of the preferred freehold tenure. The participation of farmers in development programs by government, private and donor communities may also enhance their knowledge in agricultural production and farm business management, which would all help to enhance their access to bank credit. Banks are similarly encouraged to devise farmer capacitation programs in order to educate them on what they expect for a potential borrower to be eligible for bank credit.