Determination of the larvicidal activity of benzoyl thiosemicarbazone and its Ni(II) complex against Aedes aegypti and Anopheles darlingi larvae in Amazonas, Brazil

Many pathogens can be transmitted to humans from infected mosquitoes such as Aedes aegypti (Linnaeus, 1762), a species responsible for the transmission of dengue fever, yellow fever, Chikungunya and Zika. In Brazil, this vector is one of the main public health problems, since it is extremely urban, has high population growth rates and is difficult to control (Simon et al., 2008; Puccioni-Sohler et al., 2017). Anopheles darlingi (Root, 1926) is of great medical relevance, as it is the vector responsible for the transmission of Malaria in Brazil, where it is basically confined to the Amazon region. Among the anopheline mosquitoes found in the region, A. darlingi is the species that  most  benefits  from   human   modifications   to  the environment. It is highly anthropophilic and endophagic (Deane, 1986; Tadei et al., 1998; Maciel-de-Freitas et al., 2012; Sinka et al., 2012). In this case, the control of mosquito populations is performed with insecticides, which, despite numerous records of resistance and high toxicity to nontarget organisms, still provide one of the most effective methods for combatting mosquitoes in endemic areas (Rivero et al., 2010; WHO, 2017).
Thiosemicarbazones belong to the thiourea group, an important class of N and S donor compounds that have high pharmacological potential, and in many cases, the mechanism of action of thiosemicarbazone is associated with complexed transition metals. From a biological point of view, metal complexes are more bioactive than free ligands, particularly thiosemicarbazones, which are active only when complexed with transition metals (Wasi and Singh, 1987; Rosu et al., 2010; Viñuelas-Zahínos et al., 2011; Netalkar et al., 2015).
The pharmacological applications of the different structural derivatives of thiosemicarbazones and their metal complexes include antifungals (Parrilha et al., 2011), cytotoxics (Rebolledo et al., 2005; Braga et al., 2016), antibacterials (Despaigne et al., 2010), antimalarials (Greenbaum et al., 2004; Chellan et al., 2010; Nandal and Deep, 2017) and insecticides (Rayms-Keller et al., 1998; Wang et al., 2010; Silva et al., 2015). Metal complexes or even free metal ions are toxic to aquatic organisms and may be found available at low levels in the environment (Arnold et al., 2005). Thus, due to the high incidence of vector mosquitoes in the region, the permanent and semi-permanent expressions of Aedes and Anopheles mosquitoes in the urban areas of cities and control actions on immature forms represent a functional alternative for the control of insects (WHO, 2014).
The synthesis and biological activity of the 1-benzoyl analogue have been reported in the literature (Xue et al., 2007; Pingaew et al., 2010). In the present study, we examined the larvicidal activity of benzoyl thiosemicarbazone and its nickel (II) complex in bioassays against A. aegypti and A. darlingi, for the control of tropical diseases in the Amazon. Our study addresses the process for obtaining the substance and its nickel complex as well as their larvicidal activity against vectors of dengue and malaria in the Amazon region not yet described in the literature.

Study site and period
The study was conducted in 2011 in the city of Manaus, Amazonas State, Brazil (-3.096240 latitude, -59.986194 longitude), located in the northern region of the country, which comprises the Brazilian Amazon region. Manaus has a population of 1,802,014 people according to the last census of 2010.
Mosquito collection and maintenance
The larvae were obtained from the insectarium of the Laboratory of Malaria and Dengue, National Institute of Amazonian Research (Instituto Nacional de Pesquisas da Amazônia - INPA), located in Manaus. The larvae remained in trays and were fed with TetraMin® (fish feed); the adult population was kept in cages with cotton soaked in 10% sucrose solution, whereas the females were also fed blood every other day for egg development. Plastic cups with moistened filter paper strips were provided for oviposition by pregnant females. The population was maintained under laboratory conditions of 26 ± 2°C and 70-80% relative humidity.
Larvicidal activity assays
Benzoyl thiosemicarbazone and its Ni(II) complex were synthesized and characterized according to Beraldo et al. (1997) and Pingaew et  al.  (2010).  In  the  assays,  the  compounds  were  dissolved  in dimethyl sulfoxide (DMSO) and evaluated at concentrations of 15.6 to 500 µg/mL against A. aegypti larvae and from 7.8 to 250 g/L against A. darlingi larvae. The assays were performed in triplicate in plastic cups containing 10 mL of distilled water, 10 larvae, feed and 100 μL of the evaluated concentration. Control was performed with DMSO. After 24 and 48 h, the number of dead larvae was recorded, and the median lethal concentration (LC50) was calculated (Dulmage et al., 1990; WHO, 2005).
Statistical analysis
The results were considered acceptable when the control mortality was less than 10%, and the number of dead larvae in the control was adjusted using the Abbott formula (Abbott, 1925). Mortality data were assessed by probit analysis (Finney, 1971). According to the regression equation, the probability of mortality value corresponds to the y-axis, whereas the tested concentration corresponds to the x-axis. To obtain the LC50, we selected the concentrations that presented larval mortality above 50%. We used the Polo Plus software (Robertson et al., 2003) and a 95% confidence interval (CI); results with p<0.05 were considered significant. 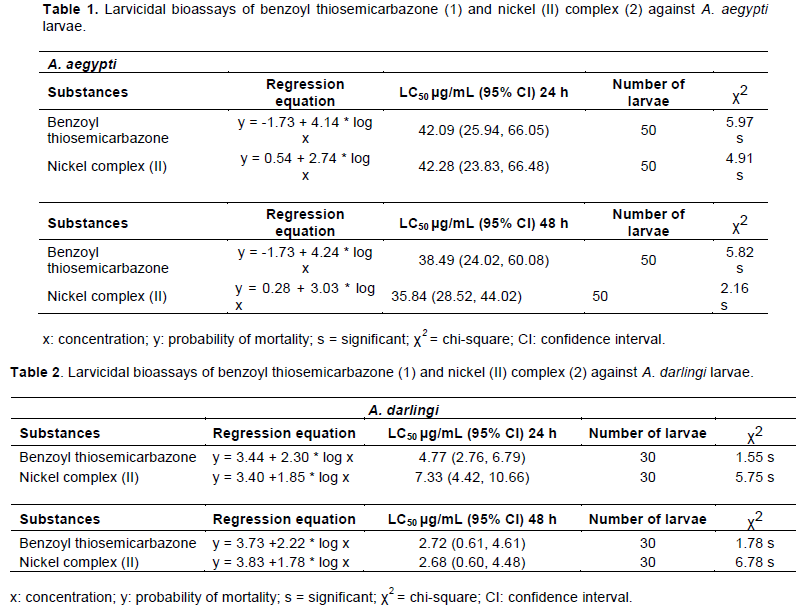 The present study addresses the larvicidal activity of a thiosemicarbazone derivative and its Ni complex against A.  aegypti and  A. darlingi,  species  responsible  for  the  transmission of dengue and malaria, respectively, in the Amazon region. Although the biological properties of the metal complexes of thiosemicarbazones have high toxicity associated with the free ligand (Mendes et al., 2006; Netalkar et al., 2015), we observed that after 24 h, the metal nickel complex was less toxic; that is, this complex displayed a higher lethal concentration against A. aegypti (LC50 42.28 µg/L) and A. darlingi (7.33 µg/L) than benzoyl thiosemicarbazone, which displayed an LC50 of 42.09 and 4.77 µg/mL, respectively.
After 48 h, however, the nickel complex showed better toxicity results, with an LC50 of 35.84 µg/mL for A. Aegypti and 2.68 µg/mL for A. darlingi. After the same period, benzoyl thiosemicarbazone presented an LC50 of 38.49 µg/mL for the first species and 2.72 µg/mL for the second.
Gopinathan and Arumugham (2015) evaluated the larvicidal activity of four Cu(II) metal complexes against Culex quinquefasciatus (LC50 0.61 to 2.09 mg/L) and Anopheles subpictus (LC50 0.89 to 1.88 mg/L). Although all complexes showed high toxicity, urea and thiourea complexed with copper presented the best larvicidal activity results when compared to thiosemicarbazide and semicarbazide. Thiosemicarbazide derivatives showed a broad spectrum of larvicidal activity at different concentrations.
Rayms-Keller et al. (1998) showed that metal ions were highly toxic to A. aegypti. For example, copper edetate in nanostructures and chitosan microcapsules showed efficacy against A. aegypti larvae, with an LC90 of 60 and 20 mg/L, respectively, because nanostructures and microcapsules favour the slow and continuous release of the active ingredient to the environment. Thus, when complexed to the nickel, thiosemicarbazone derivative tested here against A. aegypti and A. darling showed high toxicity. However, the results of this study indicate that the metal-ligand bond did not significantly favour larvicidal activity at all reading ranges, as observed for the assays against A. darlingi (Table 2); that is, the metal complex did not directly affect the simultaneous ion exchange in the biological system due to the reactivity and especially  the  redox  effect   caused   by   transition metals in biological systems (Stohs and Bagchi, 1995; Nguyen et al., 2000).
Beraldo and Gambino (2004) and Al-Amiery et al. (2012) described a series of thiosemicarbazone derivatives and metal complexes with different chemical and biological properties and highlighted the high biological potential of the metal complex relative to the free ligand. The compounds synthesized and evaluated against mosquito larvae in the present study need to be evaluated for toxicity against nontarget insects and especially regarding the accumulation of heavy metals in the environment, which requires special treatment for their removal (Mireji et al., 2010). The search for new active compounds is challenging because of the many cases of insects resistant to the insecticides currently used in vector control campaigns (Rose, 2001). Integrated mosquito management programmes targeting larvae and mosquitoes serve as one of the most effective ways to control insect populations and consequently reduce the number of vector-borne diseases in endemic areas.

Benzoyl thiosemicarbazone and its Ni(II) complex showed larvicidal activity against the larvae of A. aegypti and A. darlingi, indicating that the thiosemicarbazone metal complex has insecticidal potential. However, elucidating the mode of action of these compounds in larvae and developing new compounds with pharmacological potential are necessary.

The authors are grateful for the funding received from the National Institute of Amazonian Research (INPA);  the Federal Institute of Education, Science and Technology of Amazonas (IFAM); and the Malaria Network Project (Projeto Rede Malaria).