Effect of azadirachtin pre-treatment on major pests, diseases and yield of seed yam

Pests and diseases infested material of seed yams have led to sub optimal yield levels. Neem was applied as substitute for chemical pesticides and as environmentally safe bio-pesticide to reduce the crops annual loss due to herbivore pests and their resulting diseases. Field trials were conducted during the 2016 and 2017 major planting seasons in four communities each of Ejura-Sekyedumase and Atebubu-Amantin districts of the Ashanti and Brong Ahafo regions respectively. Yam minisetts sizes were pre-treated with Mancozeb at a rate of 100 g and Lambda cyhalothrin at 40 ml in 10 L water as cocktail. Yam minisetts of 30 g each were planted on ridges at 100 cm between and 30 cm within rows on a 20 m × 20 m plot size. Neem leaf powder was applied on five rows per plot and another five served as check for assessment. Harvesting was done approximately 6 to 7 months after planting. Scale insects, mealybugs, beetles, termites and millipedes infestations. Galling due to root-knot nematodes, cracks, soft and wet rot were assessed on a scale of 1-5. Tuber yields were also assessed. Neem treated plots were observed to have significantly reduced arthropod pest populations and nematode galling as well as damage signs compared to the control plots. Yields of seed yam were higher on the neem treated plots than the control, probably due to the reduced damage on the treated plots. Seed yam yield increased for plots treated with Azadirachta indica leaves by 40 and 41% at Ejura-Sekyedumase district as well as 45 and 20% at Atebubu-Amantin district for 2016 and 2017 respectfully. Plots of seed yams treated with neem recorded reduced pests and damages in terms of parameters measured and subsequently translated into yield. It is paramount to seed yam producers to adopt neem leaf powder as pre-treatment for higher productivity.

Yam (Dioscorea spp.) is one of the most important root and tuber bearing crop in the world and an important source of energy. More importantly, yam tubers have organoleptic qualities which make them the preferred carbohydrate staple and can contribute up to 350  dietary calories per person each day (Asiedu et al., 2003). In Ghana, yams are used for local dishes. The two most cherished dishes are “fufu” (yam pounded into a thick paste after boiling and eaten with soup) and “ampesi” (boiled   yam   eaten   with   sauce).   Besides   nutritional
significance, yam has pharmaceutical properties (Benghuzzi et al., 2003). It is a staple food for millions of people in tropical countries, notably in West Africa, the Caribbean’s and parts of southeast Nigeria (Hgaza et al., 2010). Dioscorea species with nutritive and antioxidant content (such as superoxide dismutase) not only enrich the diet of consumers but also make them ethnomedicinally important (Chandrasekara and Kumar, 2016; Liu et al., 2016). The socio-cultural significance of yam cannot be over emphasized. Yam is extensively produced in West Africa where they are steeped in cultural history and revered as a cultural symbol of fertility (Bridge et al., 2005). Yam serves as a special component of traditional gift, fine and bride price (IITA, 2004). It is also used in curing gastritis among Yoruba local groups of Cuba (Kadiri et al., 2014).
In Ghana, large-scale cultivation of the crop is in the Afram plains, the three northern, Brong Ahafo and Ashanti regions (Osei et al., 2011). Production of yam offers employment, food, cash and medicine (Aighewi et al., 2014) for people. There is ready market for the crop as there is a high demand on both the local and export markets (Armah, 2010). The importance of quality seed yams in the production of the root crop is important because seed yams are generally prone to pests and diseases infections (Mbiyu et al., 2012). Ghana loses about 40% of its yam production to diseases and pests (Aighewi et al., 2015). Yam farmers at a workshop in the Northern Region of Ghana in 2012 reported 10% loss by anthracnose diseases and 50% loss by other diseases such as nematodes (Peters et al., 1999). In West Africa, arthropod pests and plant-parasitic nematodes damage are major constraint to yam tuber quality reduction, yield losses in the field and storage. The major nematode pests include the yam nematode, Scutellonema bradys, and root-knot nematode, Meloidogyne spp. which are field and post-harvest pests (Agbaje et al., 2003; Adegbite et al., 2005). Application of synthetic pesticides is the most effective control strategy in yam seed production but these chemicals are expensive compared to botanicals as demonstrated in a study by Amoabeng et al. (2014). Synthetic pesticides can impact negatively on the environment, untargeted pests, microorganisms and human (Bell, 2000; Aktar et al., 2009). Organic soil amendments provide beneficial effects which include nematicidal properties and the potential to increase the yields of crops significantly (Rivera and Ballay, 2008). Farmers in Ghana customary have used plant like Azadirachta indica (Sapindales: Meliaceae) as traditional products for crop protection (Gerken et al., 2001). Oil extracted from A. indica (neem) seed has insecticidal and medicinal properties (Hassan et al., 2010).
Considering the negative effects usually posed on the environment and on non -target organisms, there is a public outcry for a paradigm shift from the use of synthetic pesticides to the use of better alternative methods such as plant extracts which are safe, cost effective, and feasible for crop protection (Amadioha, 2000). The use of healthy seeds yam in the system will go a long way to increase yam productivity in the sub region as it contributes to lowering of pests and diseases potential load in the environment. The objective of this study therefore, is to evaluate the effect of neem leaf powder application in managing arthropod pests and plant parasitic nematodes damage to seed yam.

Study area
Field demonstration trials were conducted during the 2016 and 2017 major yam planting seasons in each of the four communities per Ejura Sekyedumase and Atebubu Amantin districts of the Ashanti and Brong Ahafo regions respectively (Table 1). These districts belong to the forest-savanna transitional zone with an average temperature that ranged from 21.5 to 30.7°C and relative humidity (RH) that ranged from 60 to 84% (MoFA, 2011). The annual rainfall is between 1200-1600 mm and the soil type is described as Orthic-Ferric Acrisols (well drained sandy clay loam soil) (Adu and Asiamah, 1992). These districts possess prominent yam farming communities where the crop is intensively cultivated. They have promising local markets and experience bimodal rainfall pattern (Owusu-Danquah et al., 2015).

Experimental design, planting and treatment
Four prominent yam growing communities were randomly selected in each district with each community serving as a replication. Yam minisetts were pre-treated with 100 g of ethylene bisdithiocarbamate (fungicide) and Lambda cyhalothrin (insecticide) at 40 ml in 10 L of  water (that is, 40/10000:v/v) mixed as cocktail. Mini sett sizes, 30 g each were planted on ridges at 100 cm between and 30 cm within rows on a 20 m × 20 m plot size. Neem leaf powder was applied to the soil on five rows per plot and another five served as check (control) for assessment. Air-dried neem leaves were milled using corn mill (Model no. 1A/2a, Crossword Agro Industries, India) and applied at 20 g per hill, which was placed in the planting hole and covered with a little soil before placing the yam minisett. The trial was weeded three times manually (one, three and six months) before harvesting. Harvesting was done approximately six to seven months after planting with the aid of hoe and cutlass.
Data collection
Twenty seed yams were randomly selected and harvested from the neem treated and the control plots. Scale insects (Aspidiella hartii), mealybugs (Planococcus citri), beetles (Heteroligus meles), termites (Amitermes spp., Macrotemes spp. and Microtermes spp.)(Isoptera: Termitidae) and millipedes (Plethocrossus sp) (Diplopoda: Odontopygidae)  infestations as well as nematode galling, cracks, soft and wet rot were assessed on the scale of 1-5; where 1 = free from attack, 2 = 1-25%, 3 = 26-50%, 4 = 51-75% and 5 = 76-100%. The tuber yield ton per hectare (t/ha) was also assessed and recorded.
Statistical analysis
Data obtained on number of feeding holes created by scale insects, mealy bugs, beetles, termites and millipedes infestations on tubers and tuber weight expressed in yield were analyzed by one-way analysis of variance (ANOVA) with SAS, PROC GLM (SAS Institute Inc., 2005). Both arthropod damage and nematode galling index data were normalized using log10 (x +1) transformation. Percentage data was transformed using arcsine of x prior to analysis. Means were separated using Tukey´s test at 0.05 probability level. 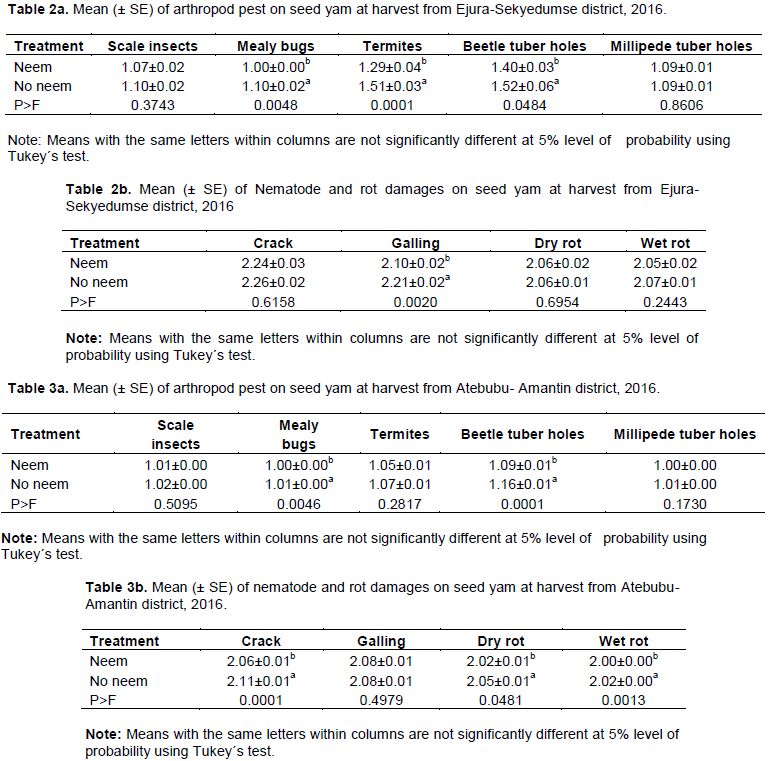 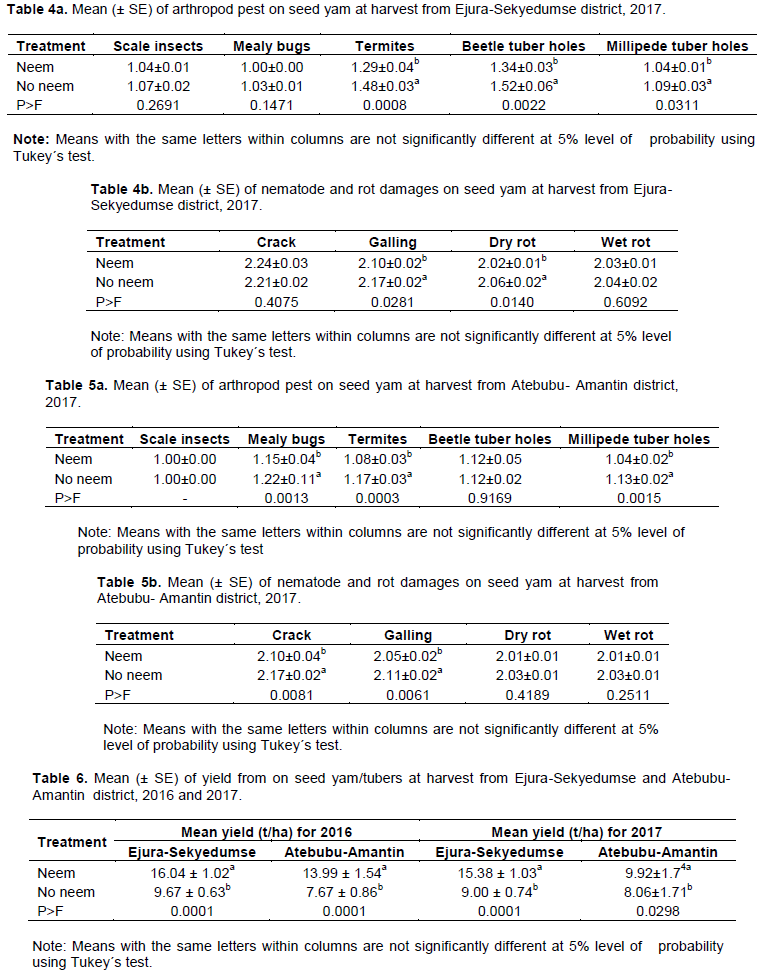 Seed yams materials treated with neem significantly reduced arthropod pests and nematodes infestations and subsequently translated into yield increase. As additional information, seed yam producers are advised to avoid late harvesting which predisposes the tubers to attack  by soil arthropods and diseases that will affect the storability and seed value of the tubers. Finally, application of neem is recommended as substitute for chemical pesticides as environmentally safe bio-pesticide to reduce the crops annual loss due to herbivore pests (and their resulting diseases), as well as increasing the food security in Africa.
We also observed that late harvesting predisposes tubers to bruises and attack so seed yam producers are advised to be early to attain maturity.

The authors appreciate the assistance of Messrs Augustine A. Darkwah, Godfred Ohene-Mensah, John S. Asante and Prince Opoku (Technical Officers) of the Plant Health Division of CSIR-CRI. This study was supported by the Community Action in Improving Farmer-saved Seed Yam (CAY-Seed) project and funded by the Bill and Melinda Gates Foundation.