Effects of crude extracts of medicinal plants in the management of Tuta absoluta (Meyrick) (Lepidoptera: Gelechiidae) under laboratory and glasshouse conditions in Ethiopia

Tomato leaf miner, Tuta absoluta (Meyrick) is a devastating pest of tomato originating from South America which has been recorded in Ethiopia throughout tomato growing areas since 2012. The larvae damages the above ground parts of the plant especially leaf and fruits from seedling stage to maturity. Studies were conducted between 2015 and 2016 for two seasons to screen medicinal plants for the management of T. absoluta under laboratory and glasshouse conditions. Crude extracts of Phytolacca dodecandra seed and leaf, Allium sativum, Nicotiana species, Cymbopogon citrates and Azadirachta indica seed were evaluated at 5, 7.5, and 10% concentrations in the laboratory. Treatments which were found to be the best in the management of T. absoluta under laboratory condition were further evaluated for their efficacy under glass house condition. The mean percentage mortality of larva was recorded for 120 h after treatment application under laboratory study. The highest larval mortalities of 98.33, 96.67 and 95% were recorded for A. indica, C. citrates and A. sativum all at 10% concentration, respectively. In glasshouse experiment, A. indica gave the highest larval mortality of 66.54 % and the lowest percent mortality was recorded in P. dodecandra leaf and seed in both under laboratory and glasshouse conditions. With the obtained results, it can be concluded that foliar application of the mentioned medicinal plants extract on tomato plants reduced T. absoluta population and improved the quality and quantity of tomato fruit yield.

Tomato (Lycopersicon esculentum Mill.) belongs to the nightshade  family,  Solanaceae.  It  is  one  of  the   most important vegetable crops in the world, and widely grown crops in Ethiopia (Lemma, 2002). It  can  be  eaten  either either fresh or processed into different products and helpful in healing wounds because of antibiotic properties found in ripe fruits and also a good source of vitamins A, B and C (Baloch, 1994).
Tomato production faces many problems from several factors which lead to significant yield loss. Among these factors, insect pests are the most important. Tuta absoluta causes a very high level of damage both in terms of quantity and quality to tomato (Garcia-Mari and Vercher, 2010; Guedes and Picanço, 2012; Megido et al., 2012), mainly if control measures are not undertaken (Desneux et al., 2010). Damage is caused by the larvae that mine leaves and bore into fruits which eventually facilitate plant pathogen invasion (EPPO, 2005). T. absoluta has recently invaded Europe, Africa and Asia (Desneux et al., 2011), being presently found in 63 countries of the world. It can affect tomato from seedling to fruit maturity stages. Feeding is caused by all larval stages throughout the plant growth period. On leaves, the larvae feed inside, forming irregular leaf mines which may later become dead tissue and serve as avenue for the entry of pathogens. The larvae can form extensive mines in the stems and tunnel into fruits, forming galleries which alter the normal growth of the plants and qualities of the fruits.
The first affected tomato plantation was detected in Ethiopia in 2012 (Gashawbeza and Abiy, 2012). Recently, the pest has been detected throughout the country and it may become a significant problem in greenhouses as well as in open fields. An immediate consequence of the introduction of T. absoluta is illustrated by the sudden increase in insecticide use in tomato fields, going from 8 to 12 applications per one season. It requires insecticide applications in every five days intervals which are needed in Dandi district West Shewa of central Ethiopia (Personal communication). However, due to the development of resistance, chemical control has shown limited efficacy even after using different types of pesticides and increasing the application frequencies (Lietti et al., 2005). Therefore, the objective of this study was the screening of different medicinal plants at appropriate doses against T. absoluta under laboratory and glasshouse conditions.

Description of the study area
The research was conducted under laboratory and glasshouse conditions at Ambo University glasshouse and plant science laboratory. Ambo is at the geographical coordinate of 8°59’N latitude and 37.85°E longitude with an altitude of 2100 masl (Briggs, 2012). The temperature of the laboratory during the study period was 24±2°C and glasshouse temperature was 32±2°C.
Botanical collection and preparation
Fresh  fruits  and  leaves   of   Phytolacca   dodecandra,  leaves   of Nicotiana species, and Cymbopogon citratus were collected and simultaneously separated from any infestation of disease and insect pest and then washed and cut into small pieces. Allium sativum was obtained from a local market in Ambo and used as fresh extract. A. sativum extraction was prepared according to the method described by Stoll (2000) using the following items: 250 g of garlic fresh bulbs were chopped and strained in grinder, then the shopped bulbs were soaked in 1 L of distilled water for 1 h. C. citratus extraction was also prepared according to Stoll (2000) as follows: dried leaves of lemon grass were powdered and strained. Fifty grams of powdered dried leaves were soaked in 2 L of distilled water for 6 h. All the botanicals were ground, mixed, strained and filtered through cheese cloth and made stock solution. The stalk solution mixed with water at 5, 7.5 and 10% concentration level (v/v) in 100 ml of water (Table 1).

Experiments under laboratory conditions
The experiment was conducted for 120 h under laboratory condition at room temperature of 24±2°C. Larvae were inserted in a Petri dish having 9 cm diameter within the leaves and provided with coated cotton moist that is kept as fresh leaves of tomato that was collected from the glasshouse. All medicinal plants were prepared in three doses (50, 75, and 100 ml/L) from prepared stalk solution as follows: Endod fruit crude water extract (P. dodecandra), Endod leaf (P. dodecandra), garlic clove (A. sativum), tobacco leaves (Nicotiana spp.), local variety, lemon grass leaf (C. citratus) and Neem seed (Azadirachta indica). Medicinal plant crude extracts were sprayed on T. absoluta larvae in the Petri dish using micro pipette. For the control treatment, larvae were treated with distilled water. After 24, 48, 72 and 120 h of exposure, the mortality rates at different concentrations were obtained. Dead larvae were removed as soon as possible in order to prevent decomposition which may cause rapid death of the remaining larvae.
Experiments under glasshouse condition
Seeds of tomato cultivar ‘Coshoro’ were planted on November 1st in the nursery site. The plants were transplanted into the experimental glasshouse after 40 days. The experimental pots were 20 diameters and 25 cm height. Totally, 21 pots were prepared and filled with compost, loam soil and sand soil in the ratio of 1:1:2, respectively. The distances between the plants were 40 cm and between the pots were 100 cm.
The experiment was laid in a completely randomized block design (RCBD) with three replications. Purposefully, the door and windows of the glasshouse was kept open for 24 h for the entrance of moths. Hence, plants were infested under natural conditions. Planted tomato plants were sprayed with medicinal plant insecticides at recommended doses from laboratory studies. Each potted plant was covered with nylon cloth to avoid escape of larvae. Mortality data was recorded after treatment application of 1st, 3rd, 5th and 7th days. The best promising medicinal plant extracts were selected for further field experiment.
Data collection
The glasshouse experiment was scouted every week for the signs and symptoms of T. absoluta occurrence until infestation of T. absoluta appeared. Before treatment application, pre-spray counts were made and then treatment application follows. Treatments were applied at vegetative, flowering and fruit setting stages of the crop. After treatment application, data on T. absoluta larva both alive and dead (per plant)  were  recorded  at  1,  3,  5  and  7  days intervals.
Statistical analysis
Data were subjected to analysis using SAS version 9.1 (SAS, 2009). The mean percent mortality was corrected using Abbott's formula (Abbott, 1925) and efficacy analysis was done based on data transformation to Arcsine  when necessary according to Gomez and Gomez (1984).

Effect of botanicals on larvae of T. absolute under laboratory conditions
Efficacy of medicinal plant extracts against T. absoluta in the laboratory is shown in Table 2. All treatments are significantly (P < 0.01) different on plant treated with various treatments and reduced the total numbers of T. absoluta larvae per treatment. Effect of medicinal plant crude extracts was evaluated against T. absoluta at three different concentrations (5, 7.5 and 10%) after four exposure time (24, 48, 72 and 120 h). Table 2 shows medicinal plant extract at 10% concentration. A. indica seed had maximum toxicity (98.33%) against T. absoluta after C. citratus (96.67%), while P. dodecandra leaf showed the minimum mortality (55.0%) after 120 h of application. On the other hand at 7.5% concentration, biocidal potential of C. citratus was high (91.67%), followed by A. indica seed (90.0%) and A. sativum (86.67%). Low toxicological effect was observed by some extracts at 5% concentration especially P. dodecandra leaf and seed showed least mortality (36.67%). Similarly, significant time interval for exposure of plant extracts was recoded at all concentrations as shown in Table 2. Medicinal plant extract did not show quick response after 24 h but the effect was significantly high after 72 and  120 h as more larvae of T. absoluta were killed. 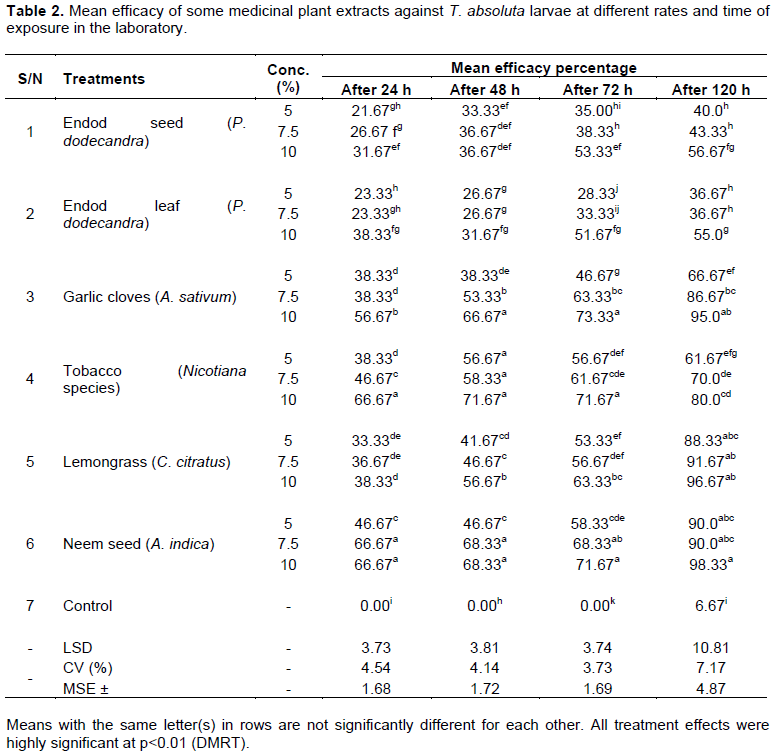 Effect of medicinal plant on larvae of T. absolute under glasshouse conditions
Under glasshouse conditions, toxicity of medicinal plant crude extracts was evaluated against T. absoluta at 10% concentrations after five exposure dates (1, 3, 5 and 7 days). The tested medicinal plant crude extracts at 10% concentration illustrated in Table 3 showed that significant (P < 0.01) differences were observed among the treatments from the untreated control. The presented data pertaining to mean percent reduction of T. absoluta larvae reveals that A. indica seed had maximum toxicity 66.54 (54.92%) against T. absoluta after which Nicotiana spp. showed 62.10 (52.58%), while P. dodecandra seed showed significantly lowest effect mortality 36.51 (36.84%) for the entire days. In general, the results indicated that each medicinal plant extract caused significant mortality rate against larvae of T. absoluta after 120 h exposure in the laboratory and after 7 days in the glasshouse. Therefore, these findings suggest that medicinal plant insecticides are a good alternative management option of T. absoluta.

T. absoluta are capable of reducing the total yield of tomato plants as well as facilitate it to secondary attack by pathogens. The application of botanicals on T. absoluta larvae resulted in good performance. These results were confirmed with those reported by Ghanim and Ghani (2014); they reported that the highest reduction of T. absoluta population was obtained after tomato plants treated with A. sativum and C. citratus extract. They showed the highest effects of A. sativum on T. absoluta second instar larvae under laboratory conditions. C. citratus extract reduced the population of T. absoluta on plant moderately as compared with A. sativum, A. indica and Nicotiana spp. The results obtained were in agreement with the work of Hussein et al. (2014); they found that the aqua extract of C. citratus and A. sativum showed good insecticidal activity and  can be used to control T. absoluta in the laboratory and greenhouse. This finding is also in concordant with the report of Gonçalves-Gervásio and Vendramim (2007); they found that A. indica seeds’ extracts made high larval mortality of T. absoluta under laboratory condition. Oparaeke (2007) verified that A. indica and A. sativum extracts contain insecticidal properties that are lethal to a wide range of insects. The results revealed that A. sativum, Nicotiana spp. and C. citratus gave promising results to minimize the impact of T. absoluta larvae on leaves and fruit’s, similarly to the standard treatment of A. indica seed.

The current experiments suggested that A. indica, Nicotiana spp., A. sativum and C. citratus showed potential effect on larvae of T. absoluta after the 7th day of application. Consequently, from the obtained results, it can be concluded that foliar application of the mentioned medicinal plants extract on tomato plants reduced T. absoluta population and improved the quality and quantity of tomato fruit yield. Therefore, further investigation is also needed to determine the active ingredients of residual effect and frequency of application against larvae of T. absoluta.