A survery of Aphelinidae (Hymenoptera: Chalcidoidea) species associated with crop and forest pests in Morocco was conducted during 2012-2014, using Malaise trap and completed by a bibliographical research. Based on examination of all the available data and captured specimens, 34 confirmed species in total included 20 genera divided into four subfamilies of Aphelinidae as listed in Morocco. Two new Aphelinidae species are recorded for the first time for Moroccan fauna of hymenoptera: Encarsia aurantii (Howard 1894) and Pteroptrix dimidiata Westwood, 1833. In addition, an annotated checklist of the Aphelinidae species for the North Africa region is also provided.
Key words: New data, Maâmora, cork oak, inventory.

The Aphelinidae represent a group of very diverse Hymenoptera insects with great variability in form and pigmentation (Janssen, 1961; Traboulsi, 1969; Heraty, 2016). The Aphelinidae family has a wide geographical distribution on the globe, where they populate numerous habitats. In the world, Aphelinidae includes approximately 1168 described species and 33 genera with 7 subfamilies (Noyes, 2016). They are parasitoids of several groups (Hymenoptera, Orthoptera, Hemiptera, Diptera, and Lepidoptera) and are widely used in biological control in many countries: Australia (Smith et al., 1997), Europe (DeBach and Argyriou, 1967; Orphanides, 1984; Siscaro, 1999; Oztemiz et al., 2008), South Africa (Bedford, 1998) and California (Rosen and DeBach, 1979). Aphelinidae species have a great economic role in the integrated pest management of several pest crops including Aleyrodidae, Coccidae, Diaspididae and Eriococcidae (Sinacori et al., 1991; Murphy, 1992; Fidalgo, 1983; Herting, 1972).
The first studies and lists of Aphelinidae in Morocco were done by Jourdan and Rungs (1934), Smirnoff (1956), Bénassy and Euverte (1968), Abbassi and Euverte (1974) and Abbassi (1975a, b). Recently, a checklist of natural enemies associated with citrus orchards pests for Morocco, particularly Aphelinidae species, was provided (Smaili et al., 2013). Noyes (2016) made a checklist of Aphelinidae species from Morocco, in which some new records are not included and listed in the most recent catalogs of the Aphelinidae species listed for Morocco where only 24 species were mentioned in Noyes catalogs (2017). This study aim was to provide clarifications on Aphelinidae species of Morocco. A comparison of this list and North Africa countries was also provided. 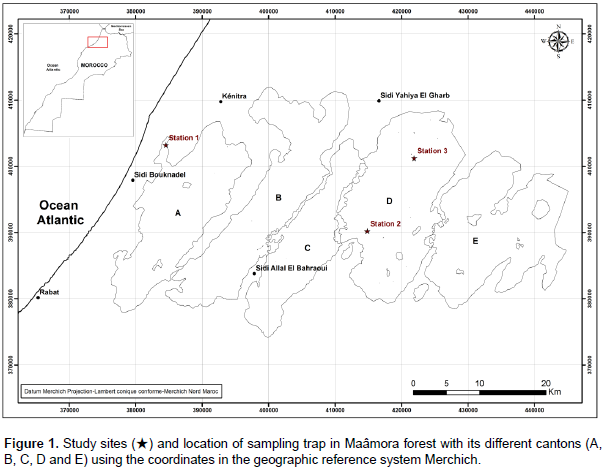 Data collection
All specimens were collected weekly using a Malaise trap per station during three phases: 26 June 2012 to 8 October 2012, 24 May 2013 to 23 September 2013 and 27 November 2013 to 14 June 2014. These dates were defined in order to make statements on all the months of the year. So, the collections were started at the end of June of 2012 during which the observable diversity of the insects and particularly the hymenoptera (parasitoid) is generally the most important. In addition, it was very important to have identified the different seasons where surveys were processed in 2013 and 2014 according to available means. Moreover, this depends on the progress of vegetation closely related to climatic conditions. Specimens caught were referred and preserved in alcohol 70°. The Aphelinidae species were counted and identified under stereomicroscope.
Identification
Classifications of generic and tribal levels were done using the terminology referred in Hayat (1983) and Shafee and Rizvi (1990). Aphelinidae species were identified using terminology and keys identifications related to Walker (1839), Howard (1894), Ferrière (1965), Viggiani and Garonna (1993), Hayat (1998), Polaszek et al. (1999), Abd-Rabou (2002, 2014), Hopper et al. (2012), Japoshvili and Hansen (2014) and Japoshvili et al. (2015). The confirmations of these species were done by comparison with collections samples from CIRAD (Montpellier, France) and those personal by Gérard Delvare (CIRAD, Montpellier, France). All available information relating to the Aphelinidae species listed for Morocco here were gathered by using several sources: Database of the specialized organizations like NHM (ww.nhm.ac.uk) and scientific articles and available papers. The percentage of presence (%) was also calculated by the number of Aphelinidae species reported in the total number of all Aphelinidae species listed in the checklist.

Global results of the current investigations in the field and the bibliography have allowed us to identify 34 Aphelinidae species confirmed for Morocco and two still undetermined. Furthermore, the field studies allowed collection of seven species. Among these, two Aphelinidae species were associated for the first time, with the cork oak forest of Maâmora in Morocco: Encarsia aurantii (Howard, 1894) and Pteroptrix dimidiata Westwood, 1833. Two other specimens of genus Encarsia sp. are still undetermined. Three species were also collected during the study in Maâmora: Aphelinus Asychis Walker, 1839; Aphelinus Mali (Haldeman, 1851) and Encarsia inaron (Walker, 1938), which were previously reported in various regions from Morocco. For new records in Morocco, a specific manuscript including a review and more global distribution of species is in preparation. Previous publications related to the Aphelinidae species from North Africa region were examined (Noyes, 2015). A list of all 88 species belonging to 11 genera is included in alphabetical order according to subfamilies and genera (Table 1). In addition, because of lack of recent studies related to the North Africa region, the new data distributions are marked for Morocco, and endemism only for all North Africa regions according to Noyes (2016).

The inventory of Aphelinidae species of Morocco was analyzed as shown in Table 1 and the observations were that most of these species belong to the genus, Encarsia (8 species). Next, in descending order, Aphytis genera (8 species), Coccophagus (6 species), Eretmocerus (4 species), Aphelinus (4 species), Pteroptrix (2 species), Marietta and Cales (1 species each) were found. These species and genera were divided into 4 subfamilies, 6 tribes and 8 genera. The most represented subfamily in this study is Coccophaginae (50%) (Figure 2). 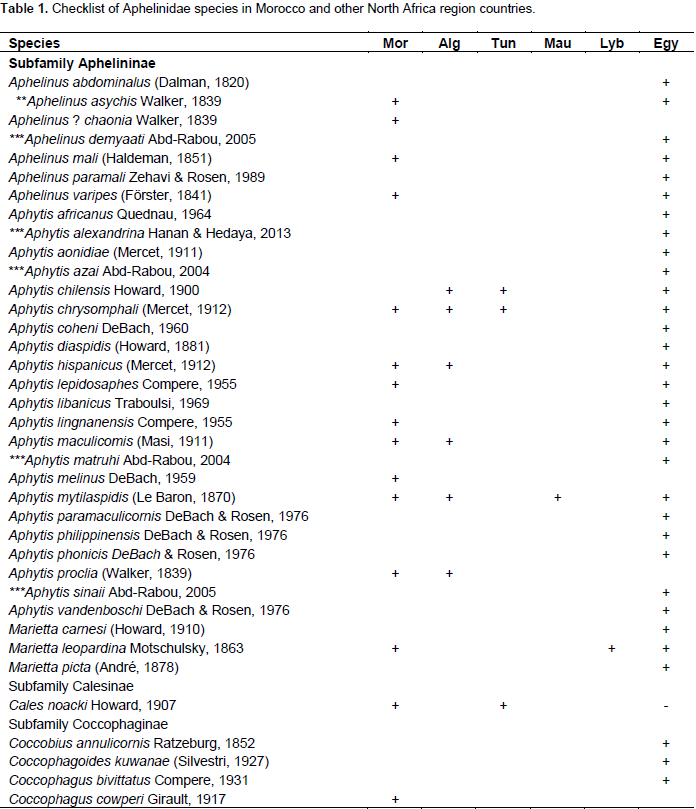 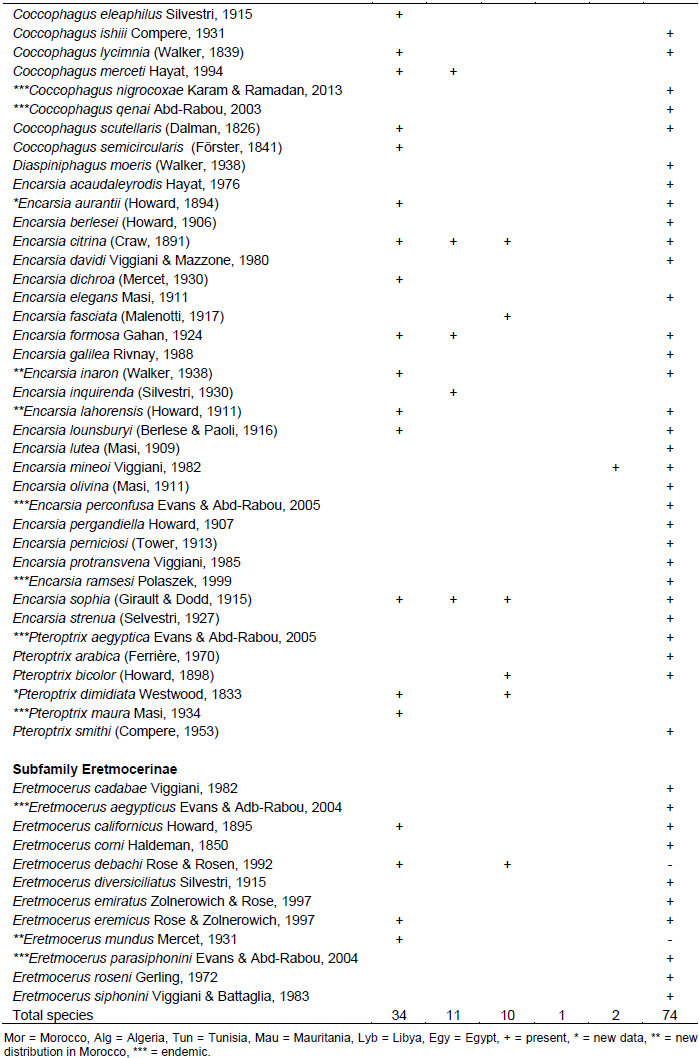 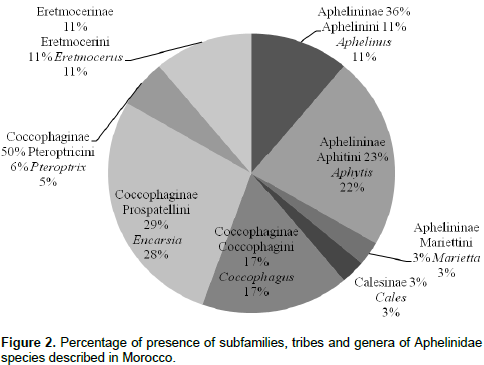 The Aphelinidae are one of the most important families used in biological control, so, several authors reported the hosts of Moroccan Aphelinidae. In general, the main hosts of the following Aphelinidae genera are:
1. Aphelinus is parasitoid of Aphididae pests (Lee and Elliott, 1998; Hmimina, 2009);
2. Aphytis Howard, 1990 and Marietta Motschulsky, 1863 are parasitoids of Diaspididae pests. Aphytis spp. They
are ectoparasitoids of Coccidae pests (Ghesquière, 1960;
Smirnoff, 1965; Bénassy, 1967; Zivko, 1972; Euverte, 1974; El Kaoutari et al., 2004);
3. Cales Howard, 1907 is parasitoid of Aleyrodidae pests (Abbassi, 1974);
4. Coccophagus Westwood, 1833 is parasitoid of Coccidae and Diaspididae pests (Mercet, 1932; Peck, 1963; Herting, 1972; EL Homriti and Laraichi, 1979);
5. Species belonging to Encarsia Förster, 1878 are parasitoids of Diaspididae and Aleyrodidae species (Orlinski and Bassova, 1996; Hanafi, 2000; Smaili et al., 2013);
6. Pteroptrix Westwood, 1833 is parasitoid of Coccidae insects (Jourdan and Rungs, 1934);
7. Eretmocerus Haldeman, 1850 is parasitoid of Aleyrodidae insects (Abbassi, 1990; Abbassi and Lakhlifi, 1994; Hanafi et al., 1995, 2003; Hanafi, 2000; Hmimina, 2009).
Note that the geographical distribution of different Aphelinidae species of Morocco is not randomly made. However, some parts of the Kingdom have had more scientific explorations than others. For example, the region Kénitra-Rabat-Salé (University City and Administrative capital) has been often solicited by many researchers and so accounted for 20 Aphelinidae species. However, in the South of Morocco, only four and three species were counted in Souss-Massa and Marrakech-Safi regions, respectively. In other regions (e.g. Casablanca-Settat, Oriental and Tangier-Tétouan-Al Houceima, Drâa-Tafilalet and Fez-Meknes regions) two species were reported.
The Aphelinidae of the North Africa region
Knowledge of the Aphelinidae, especially in countries of the North Africa is still very incomplete and presents several shortcomings. The comparison of Moroccan Aphelinidae with the fauna of those countries reveals that Morocco has sometimes more and sometime less species richness (35 species) of this family as compared to its neighboring countries. In Algeria, Tunisia, Libya and Mauritania are cited, respectively 11, 10, 2 and 1 species (Table 1). But these numbers do not necessarily reflect the reality, since no recent revision is available. On the other hand, Egypt research on particularly Hymenopteran parasitoids in crops are ahead as compared to other North African countries, so that determination keys for Aphelinidae and other families of Egyptian Chalcidoidea are already established. Egypt has 74 species of Aphelinidae and 12 are endemic (Abd-Rabou, 2004; Evans and Abd-Rabou, 2005; Ramadan and Karam, 2013).
The genera found in the North Africa are: Aphelinus Dalman, 1820; Aphytis Howard, 1900 Cales Howard, 1907; Coccobius Ratzeburg, 1852; Coccophagoides Girault, 1915; Coccophagus Westwood, 1833; Diaspiniphagus Silvestri, 1927; Encarsia Förster, 1878; Eretmocerus Haldeman, 1850; Marietta Motschulsky, 1863 and Pteroptrix Westwood, 1833. So, only the third of the number of genera known in the world is inventoried in North African region. Hence, the insect’s fauna of this family as well as all the order of Hymenoptera require scientific cooperation in order to better contribute to the knowledge of this fauna of importance in the use in biological control. Aphelinus is a genus that has a wide distribution in many parts of the world. In Morocco, it is represented by four species and in Egypt by six species. Aphytis which has 110 species worldwide is a genus relatively scarce far across the North Africa region represented by 22 species including 20 in Egypt, 6 respectively in Morocco and Algeria and only one in Tunisia and Mauritania.
Despite the small richness (13) around the world, the genus Cales is represented by a single species Cales noacki Howard, 1907 in Morocco and others countries. Acclimatization of C. noacki was carried out successfully in the North Africa countries against the wooly whiteflies Aleurothriux floccosus (Maskell, 1896) (Hemiptera: Aleyrodidae) (Abbassi, 1974, 1975b; Chermiti and Onillon, 1995). Diaspiniphagus and Coccophagoides have a restricted distribution in the world represented respectively by 8 and 9 species and are also rare genera in the North Africa since they are known in Egypt by a single species of each: Coccophagoides kuwanae (Silvestri, 1927) and Diaspiniphagus Moeris (Walker, 1938). However, Coccobius genus which has 97 species sweeping the Palearctic, Nearctic and Afrotropical is represented in Egypt by a single species, Coccobius annulicornis Ratzeburg, 1852.
The genera Coccophagus, Encarsia and Eretmocerus present a great species richness in several countries of the North Africa where they seem numerous. It is noted that Encarsia is the only genus that could be present in every country the North Africa without exception. Pteroptrix genus seemed to be confined more to the eastern Mediterranean in Tunisia and Egypt, respectively with 2 and 4 species, whereas it was just discovered in Morocco for a second time, a new species Pteroptrix dimidiata Westwood, 1833 knowing that the species already cited Pteroptrix maura Masi, 1934 is endemic. Despite the few species (3) of Marietta genus existing, in the North Africa Marietta leopardina Motschulsky, 1863 presents a wide distribution since it inhabits Morocco, Libya and arrived far as Egypt.
The knowledge of Aphelinidae especially in the North Africa countries is still very incomplete. So, the fauna inventory of Hymenoptera and especially natural enemies in Morocco is still insufficient and therefore requires further study and revision. Bibliographical research in large countries as Maghreb have shown that most of the Aphelinidae species apparently have restricted distribution since only 8 species are known in more than two locations. But it can be noted that twenty species has a wide distribution that is going from Morocco to Egypt. The finding related to the analysis of the distribution of Aphelinidae in Morocco will contribute to implementing biological control of the crop pests and taxonomic studies of parasitic wasps for sustainable agricultural in Morocco as well as in all countries of the North Africa region.