Pest invasion is one of the limiting factors affecting food production. Tomato leaf miner (Tuta absoluta) (Meyrick 1917) (Lepidoptera: Gelechiidae), is an invasive insect pest of tomato. However, In Kenya, there is limited information on the level of invasion of the pest in tomato producing areas in the country. We assessed the level of invasion of T. absoluta and farmer management practices in Kirinyaga County. Tomato farmers were interviewed using questionnaires aimed at identifying the management practices used by farmers to control T. absoluta and their awareness on the insect pest. Two hundred and eight tomato farmers were interviewed, 90% of the respondents rated T. absoluta as a major pest of tomato. Results show that 94% of the respondents use synthetic chemicals in the control of T. absoluta with an average frequency of 12 times per growing season of three months with the highest frequency being 16 times. Increased use of synthetic insecticides was associated with a negative impact on the natural enemies. Among the interviewed farmers, 52 and 46% of respondents stated that after chemical spraying natural enemies disappear and are killed respectively, while 2% did not know what happened to them. It is therefore imperative to design an integrated pest management program that integrates biological control and environmentally friendly chemicals for sustainable control of T. absoluta populations.

The tomato leaf miner, Tuta absoluta (Meyrick) (Lepidoptera: Gelechiidae), is an  invasive  pest  that was first described in Peru in 1917. It was reported in Eastern Spain in  late   2006  (Urbaneja  et  al.,  2007)   and   has
continually spread, throughout Europe, Middle East, Northern Africa, Sub-Saharan Africa and it is currently found in Tanzania and Uganda (Tonnang et al., 2015). In Kenya the pest was first identified in early 2014 through pest surveys conducted by research organizations including International Centre of Insect Physiology and Ecology (ICIPE), Kenya Agriculture and Livestock Research Organization (KALRO), and the National Plant Protection Organization- Kenya Plant Health Inspectorate Services (NPPO-KEPHIS).
Tuta absoluta can cause severe damage to tomato both in open field and green house production (Seplyarsky et al., 2010; Desneux et al., 2011). It can affect all parts of a plant from the leaves, leaf veins and stem margins, sepals, green and ripe fruits (Estay, 2000). After hatching, young larvae penetrate the leaves, stems and fruits of tomatoes on which they feed and develop, creating mines and galleries which affect the photosynthetic ability of the plant, thereby reducing tomato yield. The galleries formed on tomato fruits expose them to secondary infection by pathogens leading to fruit rot (Ekesi et al., 2011) and yield losses of up to 100% if not controlled (Desneux et al., 2010).
Control of T. absoluta has been difficult due to its wide host range including pepper (Capsicum annuum L.), long-spined thorn apple (Daturaferox Kunth) (EPPO, 2005), Devil’s trumpet (Datura stramonium), tobacco (Nicotiana tabacum L.) (Vargas, 1970) and the American nightshade (Solanum americanum Miller) (Fernandez and Montage, 1990). Although the tomato leaf miner prefers tomato over other solanaceous crops, in Italy it was reported on beans (Phaseolus vulgaris) (EPPO, 2009), Lycium sp. and Malva sp. (Caponero, 2009) which act as a further alternate host. T. absoluta also has a complex life cycle that involves both sexual and asexual (Parthenogenetical) reproduction leading to very rapid developmental rates at optimum temperatures (Lanzoni et al., 2002; Cocco et al., 2012).
In Kenya, there is limited information about the pest status of T. absoluta and the control measures applied by farmers. The dispersal rate of T. absoluta has increased economic losses both in field and greenhouse tomato production (New pest in Kenya: Preliminary surveillance report on T. absoluta by the cabinet minister (Food and Agricultural Organization of the United Nations, 2014). This study focused on determining the farmer management practices of T. absoluta and their awareness on the insect pest and its natural enemies if any, in  Kirinyaga County, Kenya in order to effectively design management strategies for its control.

Experimental Site
The study was conducted in Kirinyaga County, Kenya which is the leading tomato producing County in the country (Horticulture validated  report,  2014).  The  area  receives  bimodal  rainfall  with rains typically occurring from March to May (long rains) and from  October to December (short rains) with an annual rainfall range of 1100 -1250 mm. Temperature range between 12 and 26°C. The soils are volcanic loam which are deep and moderately to highly fertile (Food and Agricultural Organization of the United Nations, 2014).
Establishment of the invasion status of Tuta absoluta
The farmers who participated were selected from a representative sample population of the total population of tomato growing farmers in Kirinyaga County. The sample size was determined using the formula by Nassiuma (2000). A total of 208 Tomato farmers were interviewed during the 2015-2016 growing season using an open and close ended semi structured questionnaires aimed at identifying management practices used by farmers to control T. absoluta and their awareness of the insect pest and its natural enemies. This was carried out across the 5 sub Counties during the period of December 2015 to April 2016 namely: Mwea East, Mwea West, Kirinyaga West, Kirinyaga Central and Kirinyaga East.
Data collection procedures
Awareness of the farmers on the insect pest, its management practices and natural enemies was assessed using the questionnaire. A pilot baseline study was done prior to the main survey to test the questionnaire and remove any redundant information to refine the data collection tool.
Data analysis
Descriptive statistics was done using Excel on the survey questions to characterize the farmer and their knowledge on T. absoluta.

Field survey
Farmers’ awareness on T. absoluta abundance and severity
Majority of farmers (90%) reported T. absoluta as one of the most severe insect pests followed by white flies (Table 1). 39% of the farmers reported higher insect attack at fruit setting stage compared to early stages of the tomato growth. Further, 27% reported to have seen high Tuta populations throughout the crop growing cycle (Table 2).
T. absoluta management
94% of farmers used synthetic chemicals in the control of T. absoluta (Table 3). A range of synthetic insecticides have been used in control of T. absoluta, however, 62% of farmers prefer coragen (Chlorantraniliprole 200 g/l) (Table 4). Pesticide application frequency by farmers ranged between 9-16 times per growing season (Table 5). 62% of farmers reported that 75% of T. absoluta are killed by pesticide application while 28% say only 50% of the pest  is  killed  and  10% of the farmers indicated that less than 50% of the pests actually die (Table 6). When the insecticide failed to control T. absoluta, 38% of farmers changed the insecticide while 34% sprayed more frequently, 13% mixed different insecticides and 11% increased the concentration (Table 7). 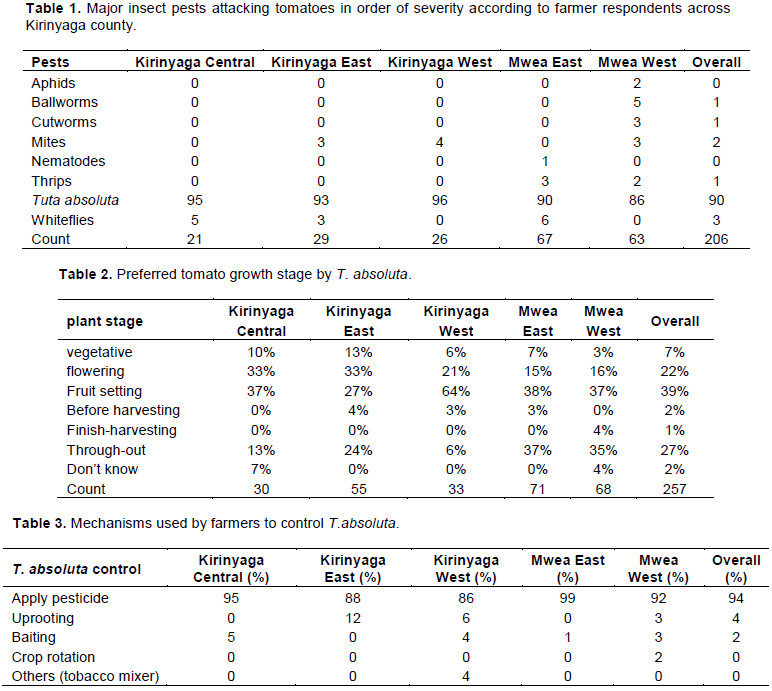 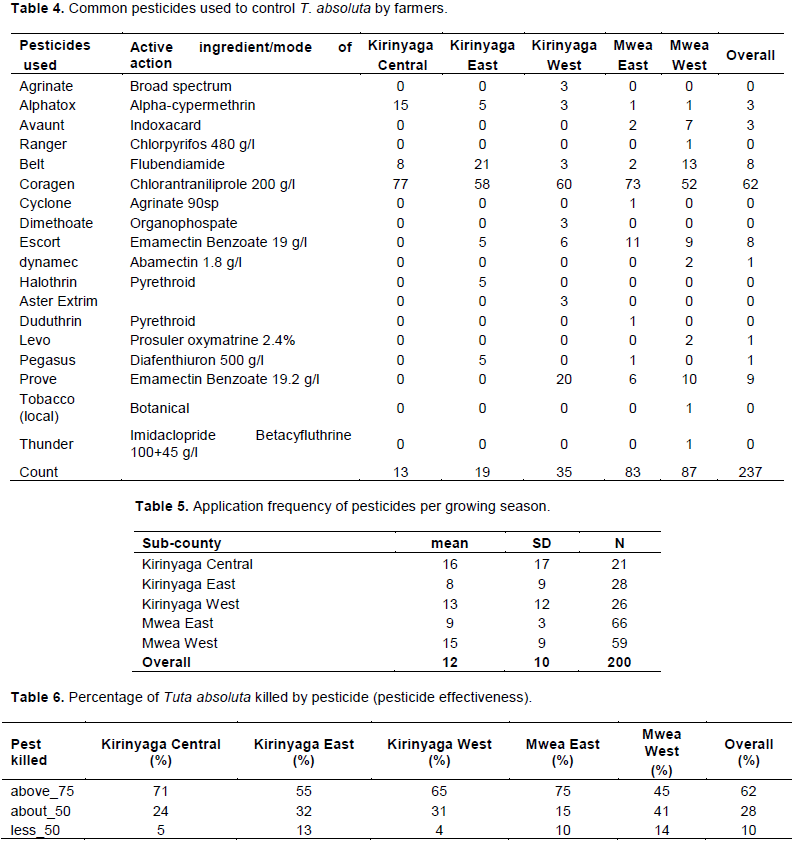 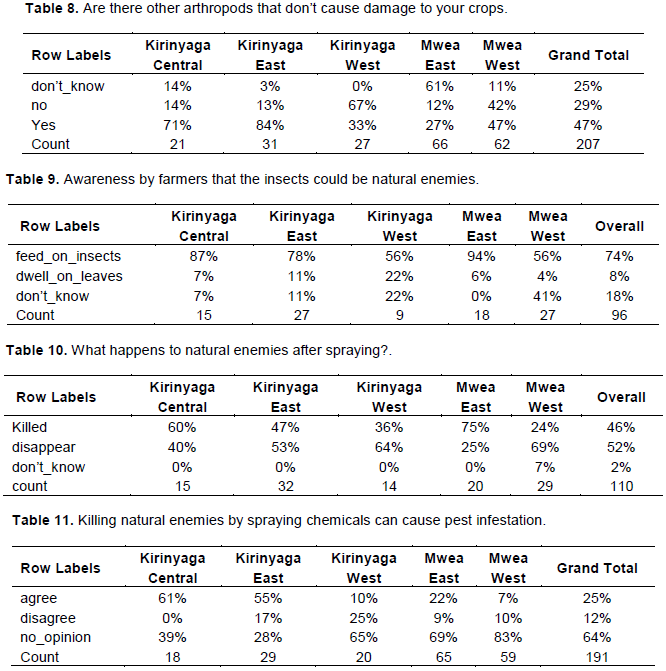 This study showed that Tomato was the most preferred crop for income generation and home consumption across Kirinyaga County hence an important  crop  to  the small scale farmers. Most of the interviewed respondents were aware of the tomato leaf miner (T. absoluta) and its severity on the tomato crop. 90% of the farmers reported T. absoluta as one of the major insect pests of Tomato occurring across Kirinyaga County (Table 1).
The easy spread and survival of insect pest throughout the growing season is accelerated by intensive farming of tomatoes as a mono-crop. In addition, the packaging material used by farmers is often shared among the small holder farmers during market days. The tomato leaf miner can reduce yield and quality of tomato in newly invaded areas   by   80-100%   both    in   field    and   greenhouse conditions (Desneux et al., 2010). The pest was found to infest the crop at fruit setting and flowering stage, however some farmers stated that they saw the insect pest throughout the crops growth cycle (Table 2). Research shows that T. absoluta can affect all developmental stages of a crop (Estay, 2000).
Use of synthetic insecticides is a predominant management option for T. Absoluta (Table 3). Insecticide treatments were mostly calendar-based, normally 1 or 2 weeks after transplanting (Table 5). Use of pheromone lures and other monitoring tools were not at all used by farmers. Effectiveness of synthetic insecticides has been mired with a lot of challenges such as occurrence of insect resistance to the active chemical ingredient (Lietti et al., 2005; silva et al., 2011). In this study, 62% of respondents agreed that the chemicals were effective in control of T. absoluta while 30% believe they were not effective (Table 6). Studies show the effectiveness of insecticides alone may sometimes be impaired because of the mine-feeding behaviour of the larvae or deficient spraying technology (Lietti et al., 2005). Further, their effectiveness could be limited due to the high reproductive capacity and short generation cycle of T. Absoluta (Gharekhani and Salek-Ebrahimi, 2014).
Consequently, farmers increased their frequency of sprays; in our results 38% of farmers changed the insecticide, 34% sprayed the same insecticide more frequently while 13% mixed different insecticides when they failed to control the insect pest (Table 7). Ajaya et al. (2016) demonstrated similar results in India where commercial tomato farmers increased the dose of spray, mixed more than one insecticide with different modes of action. This however, leads to substantial increase of the broad spectrum insecticides which lead to economic and environmental impact, and disruption of the natural enemy complex of the insect pest (Biondi et al., 2012).
Insecticide treatments used by farmers were mainly broad spectrum ranging from organophosphates to pyrethroids targeting T. Absoluta and other lepidopteran pests. Coragen® (Chlorantraniliprole) was the most preferred insecticide by farmers for its effectiveness in the control of T. Absoluta (Table 4). Dinter et al. (2008) recorded a remarkable toxicity of Coragen® against tested larval instars of T. Absoluta under field conditions. It was also noted that the insecticide had low mammalian toxicity.
However, increased use of synthetic insecticides has been found to negatively impact on the natural enemies. In this study 47% of respondents claimed to have seen natural enemies in their fields while 29% had not seen any natural enemies in their fields and 25% did not know what natural enemies (Table 8) were. From our findings 52 and 46% of respondents stated that after chemical spraying natural enemies disappear and are killed respectively, while 2% did not know what happened to them (Table 10). Intensive use of synthetic insecticides has been found to cause residues on tomato fruits, destruction of the natural enemy population and compromise human health (Desneux et al., 2007; Biondi et al., 2012).

It is evident from the results that T. absoluta populations are established across Kirinyaga County. Farmers were also able to identify the insect pest whose control was inclined to synthetic chemical sprays. This however, poses a risk of occurrence of resistant biotypes of the insect pest, reduced profits from high insecticide cost and destruction of natural enemy populations. It is therefore necessary to design an integrated pest management program that is environmentally sound for sustainable management of T. absoluta populations.

The authors wish to thank the Ministry of Agriculture Extension officers from Kirinyaga County for their help in introducing us to the tomato farmers. Also we thank all the interviewed farmers for their time in filling the questionnaires, their availability and collaboration.