A pot randomized complete block design experiment was carried-out to evaluate the impact of calcium sulphate or potassium silicate or moringa dry-leaf powder either alone or combined as double or triple treatments along with oxamyl or the three items + oxamyl 24% L as tetra application in comparison with oxamyl at the recommended dose against Meloidogyne incognita infecting tomato plant cv. 9065 FI under greenhouse conditions (25±3°C). All tested treatments improved plant growth criteria and reduced nematode parameters as well. Moringa dry leaf powder singly surpassed other tested single treatments  in the increment values of total plant length, number of leaves and branches per plant; total plant fresh weight and shoot dry weight, and also accomplished the highest percentage reduction of nematode parameters with the maximum values of final nematode population, number of galls and egg mass/plant, respectively. Among the dual treatments, moringa dry leaf powder plus calcium sulphate at their half doses overwhelmed other double treatments in the percentage increase values of such plant growth  characters of tomato and achieved the highest reduction values of final nematode population, number of galls and egg masses. Likewise, the same trend was evident as the two compounds of moringa dry leaf powder plus calcium sulphate mixed with oxamyl at 1âˆ•3 each. Moreover, a similar trend was also strongly observed in the case of applying oxamyl to that tested three components as 1âˆ•4 each which gave the high synergistic action by showing the highest recorded values of plant growth criteria and also recorded a high synergistic action in diminishing nematode criteria as well as the highest percentage increase value of total phenol (23.70%). The C/N ratio of the tetra treatment gave the least value of this item (16.03:1), while oxamyl had 19.67:1 vs. 22.88:1 for nematode alone, respectively.
Key words: Tomato plant, Meloidogyne incognita, oxamyl, moringa, total phenol, calcium sulphate, potassium silicate, integrated control.

Root-knot nematodes (Meloidogyne spp.) are one of the most wide spread and damaging agricultural pests in the world causing an estimated US $100 billion loss/year worldwide (Oka et al., 2000). They are widely distributed in cultivated areas of Egypt causing remarkable crop losses. Tomato is preferable host to several species of root-knot nematodes. Biocontrol agents applied singly are not likely to perform consistently against all parasitic nematodes under soil environmental conditions. Different mechanisms of control may be dissimilarly influenced by environmental conditions; and it is possible that if multiple mechanisms are involved under a certain set of conditions, one mechanism may compensate for the other (Guetsky et al., 2002). So, the control achieved by biocontrol agents with several distinct mechanisms of control may be additive or synergistic. The approach of combining biocontrol agents to manage various soil borne pathogens including plant parasitic nematodes has been investigated extensively (Hojat et al., 1998; Pierson and Weller, 1994; and Siddiqui and Mahmood, 1993). Integrated nematode management using several control techniques that is soil amendments and bioagents with minimal use of nematicides received recently great attention among nematologists, providing effective control measures against the target nematode by keeping nematode population densities at the safe level and avoiding environmental pollution (AL-Ghnam, 2011). The objective of the present work was to study the impact of calcium sulphate or potassium silicate or moringa dry-leaf powder in comparison with oxamyl on plant growth response of tomato plants infected with M.  incognita under greenhouse conditions.

Where, T=Total content of phenolic compounds, in mg of catechool/100 g of fresh weight material.
C = The concentration of catechol established from the calibration curve, in mg/ml and V= the volume of extract in ml; m =The weight of pure plant ethanolic extract in g. 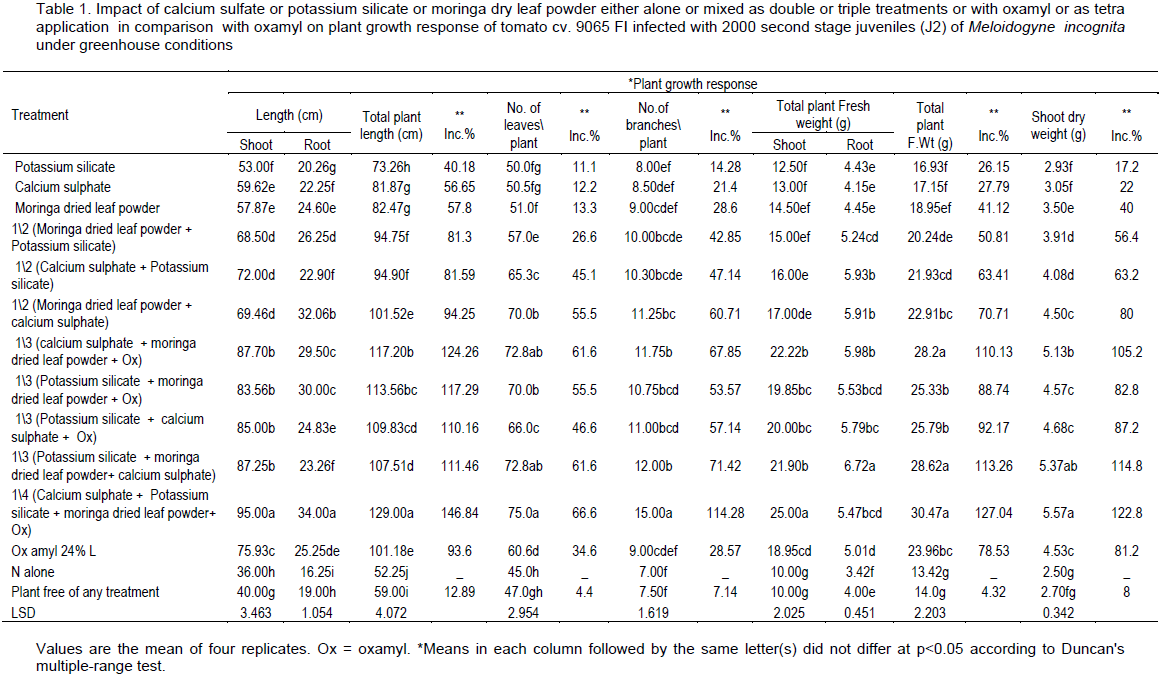 Moreover, plant receiving calcium sulphate as a single treatment ranked second to moringa dry leaf powder in reducing nematode parameters since. Its values amounted to 66.4, 72.22, and 75.55%, for the same parameters whilst potassium silicate showed the least values in this respect which were appointed to 61.2, 62.27 and 74.07% for final nematode population, number of gall and egg masses ?root system, respectively compared to nematode alone (Table 2). As far for the dual applications, moringa dry leaf powder plus calcium sulphate at its half doses achieved the highest reduction values of final nematode population (78.2%), number of galls (83.33%) and egg masses (85.18%), followed by that of 1?2 (calcium sulphate + potassium silicate) than treatment that contained 1?2 (moringa dried leaf + potassium silicate), respectively as compared to nematode alone. It is interesting to observe that 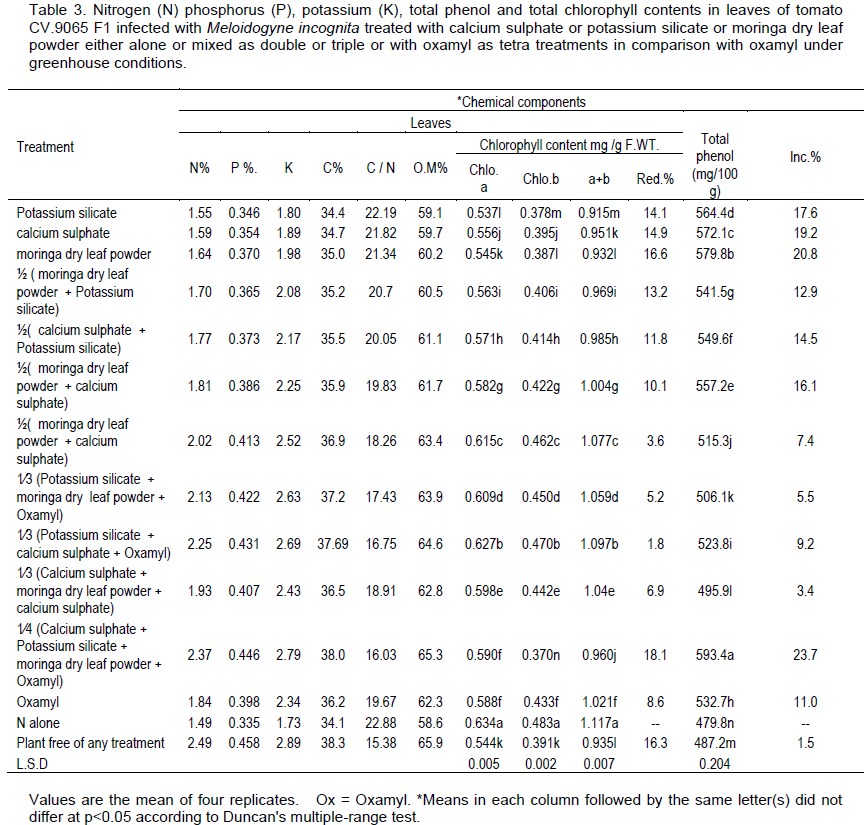 Using calcium sulphat or potassium silicate or moringa dry leaf powder either alone or mixed as dual or triple or tetra treatments along with oxamyl at ½ or ? or ¼ doses compared to oxamyl at the recommended dose on reproduction and development of M. incognita play an important role in diminishing root knot nematode on tomato plants and its reproduction factors (RF), where the double, triple and tetra treatments tested gave better results than single ones did. In the meantime, among the single applications, moringa dry leaf powder accom-plished the highest percentage reduction of nematode parameters. Results of this work are supported by the findings of Sowley et al. (2014) who said that the infestation of root-knot nematodes were significantly lower in the moringa leaf powder-treated plots than the control. They added although significant differences were not observed in all the parameters evaluated among the moringa leaf powder treatments, sweet pepper plants treated with 80 g/L of moringa leaf powder per plot recorded the highest mean value of  plant height, number of leaves, number of fruits per plant, fruit weight per plant total yield per plot and the thickest plant girth. Similarly, the sweet pepper plants treated with 80 g/L of moringa leaf powder had the lowest infection index (root gall) and nematode population. Application of moringa leaf powder at 40, 60 and 80 g/L increased sweet pepper yield and decreased nematode population confirming their potential in management of root-knot nematodes.
Claudius-Cole et al. (2010) recorded that Moringa oleifera, is widely used in water treatment as a good inhibitor of nematode egg hatch and juvenile survival. It was also effective in reducing nematode population in plants with a subsequent increase in plant growth and yield. Guzman (1984) found that water extracts of moringa leaves were to be as toxic to M. incognita as standard pesticides. The nematicidal effect of the tested materials may possibly be attributed to their high contents of certain oxygenated compounds which are characterized by their lipophilic properties that enable them to dissolve the cytoplasmic membrane of nematode cells and their functional groups interfering with the enzyme protein structure (Knobloch et al., 1989).
The positive increments values of N, P and K was correlated within any tested single, dual, triple and tetra applications of such materials along with oxamyl added, a situation that is supported by the findings of El-Sherif and Ismail (2009) who reported that ½ (B.t. + Ox) treatment exceeded that of either B.t. or ox amyl alone in values of N, P and K cons. in soybean plant infected with M. incognita. Meanwhile, the same trend occurred in the case of total phenol content on tomato plant infected with M. incognita, in this study and is supported by the findings of Kesba (2010) in respect to treatments of humic and fulvic acids that significantly improved the levels of non-enzymatic antioxidants molecules including total phenol in the roots infected grape rootstocks roots with Rotylenchulus reniformis or Tylenchulus semipenetrans, especially at the higher concentration of the organic acids. Increasing levels of total phenol may serve as defense compounds against pathogens (Kosuge, 1969). However, there were negative corre-lations between the single and concomitant applications of the tested components regarding the reduction of total chlorophyll content in the present study compared to nematode alone, a condition which is in agreement with those reported by El-Sherif and Ismail (2009) in respect to M. incognita infecting soybean plant.
Undoubtedly, the abiotic factors used in the present investigation as tool for the integrated control of M. incognita on tomato plants through the tested one or two or more components along with oxamyl as systemic nematicide at their proper doses succeeded to generate a sort of inducing resistance in a susceptible host plant against such pathogenic nematode, since tetra application in this work showed very low eggmasses (7.0) or females (8.5) on root system of tomato plant infected with M. incognita. Moreover, the nematicidal activities of the tested materials as biofertilizers as well as their thermo stable toxin in the integrated management of M. incognita on tomato plants along with oxamyl can be varied from component to another. These variations may be attributed to the differences in the chemical nature, compound present in these tested material and method of application used. The safety of such materials and its low cost is one of its advantages. These observations agreed with those of Oteifa (1953) who stated that root-gall nematode damage on cabbage increased with amounts of potassium available to the host plant because potassium increased the rate of reproduction of nematode. Huber (1991) also recorded that root gall nematode damage on lima bean decreased with increased ammonium supplied to the plant.
In addition, these results are also in agreement with those reported by Oteifa and El-Gindi (1962) in respect to plants with fewer root galls that would translocate more nutrients to vegetative organs than heavily galled roots. Regarding the C/N ratio, it ranged between 21.34 to 22.19, 19.83 to 18.26, 16.03 for single, dual, triple and tetra treatments vs. 22.88 for nematode alone, respectively, and agrees with the findings of Miller and Donahue (1990) who reported that organic residues with C/N ratio 20:1 or narrow have sufficient nitrogen to supply the decomposing microorganisms and also to release for plant use.
However, more research is needed to be done in this direction under field conditions before drawing such recommendations for new trend safe and effective integrated nematode management alternative (s) based on the combined use of natural and synthetic compounds.

This work is a part of M.Sc. thesis of Saadoon M. Saadoon (Post graduate student) and was supported by a grant from the government of Iraq. The authors thank the staff members of the Nematology Research Unit (NERU), Agricultural Zoology Department, Faculty of Agriculture, Mansoura University, Egypt for their encouragement to carried-out this work.