Three rates of ground leaves and fruits powders of Myristica fragrans (5, 10 and 20 g/pot) were evaluated for their nematicidal effect against M. incognita infecting sunflower plants under greenhouse conditions. Results indicated that all tested applications significantly enhanced sunflower plant growth characters. Moreover, all tested treatments significantly gave better results with a significant correlation between the increase in the added dose and the improvement rate in the tested plant criteria and nematode parameters. The modest dose of leaves and fruits doses (10 g/pot) recorded the highest rates of improvement with values of 88.5 and 63.5; 88.9 and 75.0; 141 and 133.3% respectively for plant length, total plant wet weight and shoot dry weight. On the other hand, the highest rate of ground leaves and fruits powders of M. fragrans (20 g /pot) recorded the highest reduction in tested nematode criteria with values of 80.0 and 75.9% for final nematode reproduction and stated the lowest nematode reproduction factor (RF) compared to nematode only treatment.

The Sunflower family (Compositae and also called Asteraceae) is one of the largest families in the plant kingdom. Plants of this family are found throughout the world, growing in many different environments and climates. The sunflower, Helianthus annuus L. is considered one of the most important oil crops, in Egypt, providing 90% for several reasons that is easily grown in most of the Egyptian land, planted in more than one agricultural  cycle   including   alongside   other   Summer crops Many nematode species are found in association with Asteraceae roots. The root-gall nematode, Meloidogyne species can infect more than 2000 species of plants. Root-knot nematodes are most abundant and cause greater yield loss in well-drained sandy soils. These nematodes are seldom found in soils with more than 40% clay or silt. Infective larvae are most active at soil moisture levels of 40 to 60% of field capacity. Eggs may be  killed in saturated soils with anaerobic conditions (Schwartz, 2007). Nematode infection affect crop production and quantity and decrease nutrients plant absorption by plants causing shortage of fertilizers available amount. The environmentally friendly alternatives control methods are required for nematode management. Biological control is one possible safe alternative to nematicides for disease management, and is likely to be free from toxic residual effects. The approach of combining biological control agents to manage various soil borne pathogens including plant parasitic nematodes has been investigated extensively (Al-Ghanam, 2011). Less attention has been devoted to methods which improve plant health for the purpose of increasing tolerance to existing nematode populations. Application of organic soil amendments is a traditional control method for plant-parasitic nematodes and it is considered a part of nematode-management programs (Oka, 2010). A variety of organic amendments, such as animal and green manures, nematicidal plants and proteinous wastes, are used for this purpose, but nematode control efficacy is not always satisfactory (Trivedi and Barker, 1986). The advantages of organic amendments in improving crop performance are well known (Gallaher and McSorley, 1995). Myristica fragrans (nutmeg) is an aromatic evergreen tree that belongs to the plant family Myristicaceae. Nutmeg is known to have an important role in plant defense, protecting against many infections, infestations, and diseases. Its uses in traditional medicine have been reported (Latha et al., 2005). Essential oils from the nutmeg seed have applications in controlling harmful organisms, and they have been shown to be toxic to insects such as cockroaches (Krishnamoorthy et al., 2001). Nutmeg essential oil showed nematicidal activity against the southern root-knot nematode M. incognita (Tylenchida: Heteroderidae) (Gotke and Maheswari, 1990). However, nematicidal effects of dried leave powders of M. fragrans against M. incognita have not been reported. In this study, three rates of ground leaves and fruits powders of M. fragrans was evaluated for their nematicidal activity against M. incognita infecting sun flower plants under greenhouse conditions.

A greenhouse experiment was conducted to study the impact of three rates of M. fragrans leaves and fruits ground into powders in comparison with oxamyl (Vydate 24% E.C, Methyl-N'N'- dimethyl-N [(methyl) carbamyloxy]-1- thioxamidate at 0.3 ml/plant) against M. incognita infecting sunflower plant cv. Giza 1 as a susceptible host at 28± 3ºC. Three seeds of sunflower were separately sown in each plastic pot (15 cm), filled with 1 kg steam-sterilized sandy soil. Two weeks later after seeds had germinated, seedlings were thinned into one seedling / pot. At this time, 52 seedlings were separately inoculated with 1000 eggs of M. incognita collected from infected roots of coleus (Coleus blumei) that were extracted from infected roots by sodium hypochlorite (NaOCl) solution (Hussey and Barker, 1973). Four sunflower seedlings were left without nematode and any  treatment  to  serve  as  a  control.  Three  rates of M. fragrans  powders (5, 10 and 20 g / pot) were separately introduced and mixed with the soil surface of each treated pot. At the same time, four sunflower seedlings with nematode received oxamyl at the recommended dose (0.3 ml/ seedling) only and another four seedlings had nematode only, while four pots without nematode and any treatment served as control. Plastic pots were arranged in a completely randomized design. Pots were watered with tap water as needed. Plants were harvested 45 days after nematode inoculation. Data dealing with plant length, fresh root and shoot weight were determined and recorded. Dry shoot weight was also estimated and recorded. Nematodes were extracted from 100 g soil using sieving and modified Baermann-pan technique (Goodey, 1957). The nematode suspension were examined using a Hawksely counting slide with an anatomy microscope to quantify the juveniles number,  then the juveniles number per pot was calculated and recorded. Number of galls, eggmasses, females, and endo-parasitic forms (development stages) in roots were counted and recorded (Bybd et al., 1983). Data were subjected to analysis of variance (ANOVA) (Gomez and Gomez, 1984) followed by Duncan multiple range tests (DMRT) to compare means (Duncan, 1955). 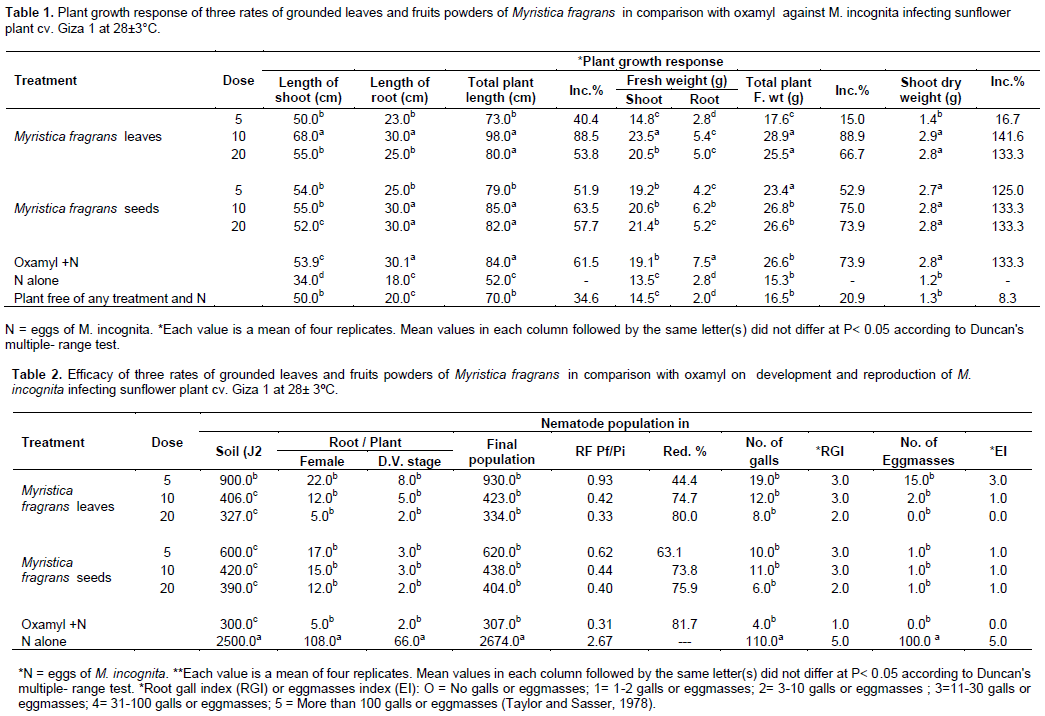 Due to the importance of the root-knot nematode Meloidogyne spp. which causes an estimated annual crop loss of more than 5% worldwide (Sasser and Carter, 1985); including sunflower crop which contains high oil and protein for human use, the control measures to be applied all over the world is becoming a great goal. However, results of the present study initiate the promising phenomenon in suppressing plant parasitic nematodes such as the root-knot nematode M. incognita (the target of this work) and ameliorating plant growth parameters of sunflower with three rates (5, 10 and 20) of ground leaves and fruits powders of M. fragrans as abiotic factor compared to the optimum dose of oxamyl used as synthetic nematicide. The highest rate of ground leaves and fruits powders of M. fragrans (20 g /pot) recorded the highest reduction values in tested nematode criteria, while the lowest rate stated the lowest reduction values in tested nematode criteria. M. fragrans seed GC/MS, contained alpha-pinene and terpine 4-ol (4.4%) that inhibits the formation of mycotoxin like aflatoxin by Aspergillus parasiticus (Lawson, 1996). Our results are in accordance with those of Abdel-Rahman et al. (2013) who suggested that monoterpenoids and essential oils with a high concentration may provide potential natural nematicides and merit as botanical nematicides for the control of plant parasitic nematodes. The same author stated that oxygenated terpenoids and phenolic terpenoids exhibited higher nematicidal activity than hydrocarbons terpenoids.