The cotton leafworm, Spodoptera littoralis (Boisd.), is a serious economic pest due to the damages it causes, and being difficult to control. The host range of S. littoralis includes over 40 families, containing at least 87 economic species (Salama et al., 1970; Gerling, 1971). Among the most important host plants attacked by this insect in Egypt are cotton and truck crops. It has been shown to reduce cotton yields by as much as 75% (Hosny and Issha, 1967). Damage on many crops arises from feeding by larvae, leading to complete stripping of the plants (Bishara, 1934). It occurs throughout Africa (e.g. Egypt, Algeria, Angola), Turkey, Spain, southern France, Southern Greece and northern Italy. It has been recorded many times in the UK (Campion et al., 1977). In, France and Greece, S. littoralis pupae have been seen in the soil after November. It is not established in the northern parts of Europe due to cooler temperatures and its quarantined pest status. The pest develops throughout the year, without undergoing diapaus (Sidibe and Lauge, 1977). Low winter temperatures are therefore an important limiting factor affecting the northerly distribution of this pest (Miller, 1976).
The minimum constant temperature for normal development in all stages is 13-14°C. Resistance to low temperatures, generally increases through the larval stages and is greatest in the pupal stage (Miller, 1977; Dahi, 2005). Sidibe and Lauge (1977), Baker and Miller (1974) and Ocete (1984) provided data on survival and development of S. littoralis at different temperatures. At 18°C, egg, larval and pupal stages last 9, 34 and 27 days, respectively. At 36°C, egg, larval and pupal stages decreased to 2, 10 and 8 days, respectively. Information on development on different host plants is given by Dimetry (1972), Harakly and Bishara (1974), Zoebelein (1977) and Badr et al. (1983). In Egypt, field studies carried out by Dimetry (1972), El-Shafei et al. (1981), Khalifa et al. (1982) indicated that six larval instars exist and there are six to seven overlapping generations of S. littoralis when feeding on cotton, and that there are three peak infestation periods. In the Middle East the leaf worm produces 7-10 annual generations (Gerling, 1971; Sidibe and Lauge, 1977).
Photoperiod is an importance greater factor in determining the developmental line (continued development vs. suspended development, that is, diapause) of many insect pests (Eizaguirre et al., 1994; Fantinou et al., 1995 López and Eizaguirre, 2019). Moreover, the effect of photoperiod on other developmental characteristics has also been determined (Lopez et al., 1995; Fantinou et al., 1996). However, data in the literature on the influence of photoperiod on life history parameters of non-diapaused insects, such as, S. littiralis or about other adaptations by which they synchronize their development with seasonal changes are little. The purpose of the present investigation was to study the effects of a range of photoperiods under different temperatures on the speed of development and the number of larval instars of S. littoralis larvae in the laboratory conditions. The obtained data may lead to more appropriate phenological models for evaluation of pest management methods and for population dynamics analysis. It can also contribute to an understanding of the effects of weather conditions on S. littoralis phenology.

The experiment was carried out in the biological control laboratory of Alexandria University, Egypt. The cotton leafworm S. littoralis was reared in mass culture on semi-artificial diet. The components of the diet were prepared and used as described by Hegazi (1976). To minimize genetic differences in developmental traits among test insects, regularly, fresh ?eld-collected insects were made to eliminate the bad effects of inbreeding for the culture. For each trial, four cultures were established from a large egg mass, reared at 4 constant temperatures of 15, 20, 25 and 30 ± 1°C. Each temperature was combined with “L:D” 0:24, 6:18, 12:12, 18:6 or 24:0 and Relative Humidity of 65 ± 5%. Also, each treatment was carried out in three different rearing chambers. The hatched larvae were reared individually in petri-dishes (3.5 cm in diameter) (n = 30-35 larvae/rearing chamber x 4 trials/ day length). Larval instars were determined according to methods followed by Stavridis et al. (2004), Mironidis and Savopoulou-Soultani (2008).
The caterpillars were fed daily, with fresh diet available at all times (ad libidum). The daily procedures were food exchange, cleanings, record of deaths, and collection of cephalic capsules. The duration and number of instars were daily recorded. The pupae obtained were sexed using the Butt and Cantu (1962) technique and weighed with a precision scale with an approximation of 0.001 g. The development of the cotton leafworm was assessed by observing time for larval growth to pupation, larval weight, pupal developmental period, pupal weight.
The experiments were conducted in incubators (type Hann, Munden, Germany, Hegazi et al., 2017), equipped with six fluorescent 30-Watt cool white flurescent tube per cabinet. In all experiments, the light onset started at 5 am. The light intensity during photophase was approximately at 1270 foot candles. Light was measured with a Weston light meter (Model) (Weston Electrical Instrument Company, Newark, NJ). Some fans were used for cooling electronic equipment, operated during the light cycle to remove heat produced by lights. Variation of temperatures in rearing chambers was ± 1°C. All incubators were located in a controlled rearing room. The results reported here only include those individuals that pass through six instars and successfully survived to eclosion.
Statistical analysis
Statistical analyses were conducted using SPSS 17.0. Differences in the durations of immature development between different treatments were compared using one way analysis of variance (ANOVA) followed by multiple comparisons analysis using Student’s t-test. 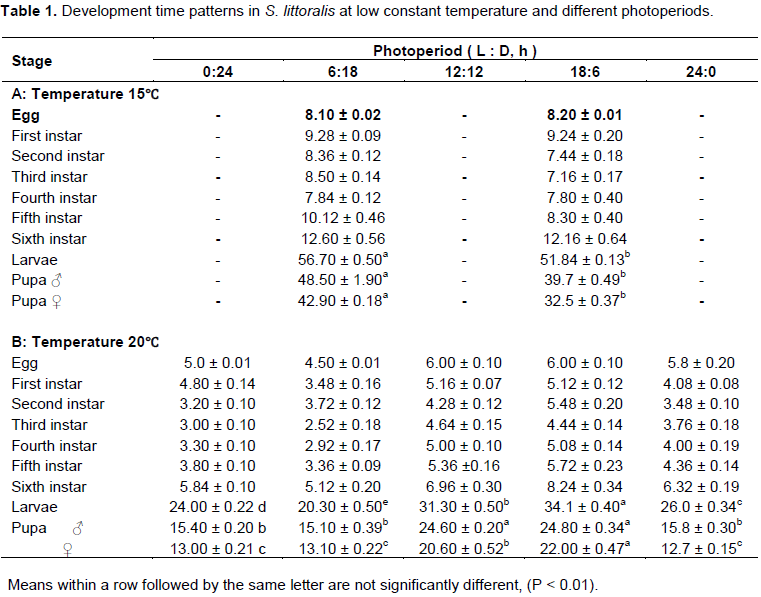 Detailed information of the insect life cycle and how it responds to environmental factors is the necessary for future events, and for developing successful control programs (Nylin, 2001; Bansode et al., 2016; Montezano et al., 2019; Du Plessis et al., 2020, Papp et al., 2018). Many studies on the  effects  of  photoperiod  have  been primarily concerned with diapause induction in insects (Mukai and Goto, 2016; He  et  al., 2017; Yamaguchi and Goto, 2019; Saunders, 2020). Photoperiod is a main factor in determining the developmental line of many insect pests (Zohdy and Abou-Elela, 1975; Eizaguirre et al., 1994; Fantinou et al., 1995; Saunders, 2020; Poitou et al., 2020). However, data in the literature on the effect of photoperiod on life history parameters of non-diapaused insects are hard to find. Very little is known about photoperiodism in S. littoralis or about other adaptations by which they synchronize their development with seasonal changes. In a preceding investigation on the effect of different photoperiods on the relative speeds of the endo-developmental stages of Microplitis rufiventris wasp attacking S. littoralis larvae, Hegazi and Fuhrer (1985) found that the short  day length (6L:18D) accelerated the development of M. rufiventris wasp larvae, while both of 18L:6D or 0L:24D slowed down the development. The results of the present study showed that photoperiod had significant effects on the developmental durations of S. littoralis larvae, fresh pupal weight and the number of larval instars. The effect was temperature dependent. At 15°C, the development was faster by 5 days for the larvae and 10 days for female pupae under long day length than under short one. At 20°C, different photoperiods significantly affected the larval duration, pupal weight and percentage of larvae that passed extra instar. For instance, the larval and pupal durations were shorter by 14 and 9 days at short photoperiod than those larvae reared under long photoperiod. It is not clear which factors can cause to come out such variability among the larval durations, and the involved physiological mechanisms.
It was reported that S. littoralis larvae had 6 larval instars (Salama and Shoukry, 1972). The present work showed that, photoperiod can influence the number of instars of this pest. The number of instars of S. littoralis was variable and 7 instars could be observed at rearing constant temperature under different ranges of photoperiods, where significant percentages of S. littoralis larvae developed through an extra instar before pupation. Baker and Miller (1974) reported similar observation on the effect of low temperatures in addition to the larval food “chrysanthemum” of S. littoralis larvae on producing extra instars. Duodu and Biney (1981) mentioned that S. littoralis larvae had an extra molt on some plants (cotton and Urena) of four tested food crops. Esperk et al. (2007), reported that the most common factors influencing insect instar number are photoperiod, temperature, humidity, food quantity and quality, injuries, inheritance and sex. Low temperature combined with short photoperiod induces slow development together with additional instars in several species (Ballmer and Pratt, 1989; Shintani and Ishikawa, 1997). Grossniklaus-Burgin et al., (1994), reported that nonparasitized S. littoralis pass through typical six larval instars. When parasitized by the egg–larval parasitoid Chelonus inanitus, they passed through five larval instars and entered metamorphosis precociously, and dig into the soil for pupation.
Juvenile hormone (JH) is vitally important in the control of insect development and reproduction (Pener and Shalom, 1987; Raabe, 1989; Nijhout, 1994).These JHs are secreted by a pair of glands in the head known as the corpora allata (Wigglesworth, 1940). JH has the power to maintain insects with larval characteristics that makes it possible for the continued growth of the larval form (Wigglesworth, 1964). Ecdysone is a steroid hormone secreted by prothoracic gland that, in its active form, stimulates metamorphosis and controls molting in insects. Nijhout and Williams (1974a, b) found that JH prevents secretion of the prothoracicotropic hormone (PTTH) by the brain of the late instar larvae of Munduca sexta. At the beginning of the periods of PTTH release is regulated by the photoperiod and it seems that the brain is needed as an initiator (Ciemiokr and Sehnalf, 1977; Matsuda, et al., 2017) for keeping in existence of the developmental rhythms. As shown from the above results, day length has significant effect on development, number of larval instars and live pupal weight. So, day length may influence insects’ basic physiological processes, such as metabolic rates, as well as functions of the nervous and endocrine systems. The corpora allata and the prothoracic gland may be sensitive to day length changes at low temperature or the day length may affect JH biosynthesis at low temperature. The implication of the key present findings possibly could contribute to more appropriate phenological models for evaluation of pest management methods and for population dynamics analysis. It can also contribute to an understanding of the effects of weather conditions on S. littoralis phenology and better management strategy of the cotton leaf worm.

The authors thank the five anonymous reviewers for constructive comments on the manuscript. The first author appreciate Alexander Von Humboldt Foundation for research equipment donation used in the present work and thank Miss Fedaa Y. for providing assistance in writing and cleaning the English. No funding was available to conduct this work.